Typical cruising altitudes for business and commercial aircraft are up to 50,000 feet or more. At such altitudes, the oxygen concentrations in the air are much lower than on the ground. Occupants could not survive in this environment without pressure inside the aircraft being controlled to maintain oxygen concentrations consistent with those at lower altitudes.

One startling tragedy that illustrated the importance of cabin-pressure regulation took place in 1999 when a Learjet was flying golf champion Payne Stewart from Orlando to Dallas. Six minutes after the Learjet pilots reported that all was well, the aircraft ceased communication with the air traffic controllers. Military aircraft in the vicinity were able to view the aircraft but reported that frost or condensation obscured most of the windshield and no movement could be seen inside the jet. Eventually, the plane ran out of fuel and crashed. There were no survivors.

When the National Transportation Safety Board investigated the accident, it found that the plane had experienced a loss of cabin pressure, and all onboard were incapacitated due to hypoxia, an insufficient supply of oxygen to the body’s tissues and organs.

If sudden cabin depressurization occurs in an aircraft like a Learjet flying at 40,000 feet, the pilots and passengers may initially experience a brief euphoria and then have as little as 5 to 12 seconds of useful consciousness to don their oxygen masks. Following this brief period, without supplemental oxygen, their cognitive and motor skills diminish, leading to incapacitation, often with fatal consequences.

However, Stacy Pappas, founder and owner of Aviation Technology Inc. (AV Tech), based in San Diego, says an instance of depressurization is rarely so sudden or dramatic, making it all the more dangerous.

“Assuming that the cabin-pressure warning system installed on the aircraft is working properly, a warning light, and in some cases a warning tone, in the cockpit alerts crewmembers that their cabin pressurization is approaching a dangerous level,” Pappas says.

Usually, the pressurization system either has failed or was not turned on in the first place.

“When you combine a subtle malfunction with a failure of the aircraft warning system, which was likely the case in the Stewart accident, the crew becomes slowly incapacitated without any awareness of the situation,” says Pappas.

“To me, it’s a needless accident,” she says. “In such cases, a simple, redundant warning system is all that is needed to protect the crew and passengers from a slow, insidious onset of hypoxia. Even if the pressurization system fails, all the pilot would need is a backup notifier that could tell him or her to reduce the aircraft’s altitude for safe oxygen levels.”

In addition to having value for pilots, such a monitor could alert NASA astronauts to a loss of pressure when training in a vacuum chamber used by NASA to simulate lunar and Martian environments. The device could also assist in alerting the crew on the International Space Station if a depressurization event occurs.

Not long after the Payne Stewart accident, Jan Zysko, an engineer at NASA’s Kennedy Space Center, invented a cabin pressure monitor (CPM) to provide early warning of hypoxic conditions. Zysko displayed the device at the Oshkosh Air Show in Wisconsin, where several pilots told him of their brushes with hypoxia-related symptoms, and how fortunate they felt to have lived through them. After the show, Zysko investigated the number of similar cabin-pressure failure incidents and found it to be surprisingly high.

Over the course of only six months, the NASA CPM went from prototype to a fully functioning unit, and in 2002, a company licensed the technology from NASA and started selling it (Spinoff 2003). In 2003, the CPM won both NASA’s government and commercial Invention of the Year awards in recognition of its value, not only on planes and in space, but potentially for skydivers, balloonists, mountain climbers, meteorologists, and people working in altitude chambers and underwater habitats, among others.

A decade later, the company that originally licensed the technology went out of business, and the license returned to Kennedy Space Center. That was when Pappas learned about the pressure monitor from a colleague of her father’s and felt an immediate, personal connection to the technology.

“My father had a love of aviation from the time he was a child,” she says, adding that he worked as an airline pilot and opened a jet-flying school. “By the time that I could walk and talk, my dad had immersed me in aviation.”

When she heard about the CPM, she called NASA and did the work to obtain an exclusive license for the technology.

Working with her team of engineers and designers, Pappas built a new product from start to finish, based on the original NASA concept. She addressed everything from the battery-powered circuit board to testing devices for the technology to the aesthetic design of the product. In about a year, she produced an all-new CPM based on the size, feel, and look of a smart phone.

Launched in 2014, AV Tech’s Alt Alert is a personal altitude pressurization monitor that is smaller and lighter than most cell phones. It comes with three different mounting options, including a backing with suction cups for window mounting, a backing with Velcro for mounting against the instrument panel, and a clip to attach it to a visor.

As an aftermarket product, the Alt Alert is an option for pilots of pressurized aircraft—jets or airliners that fly above 15,000 feet—to take with them in their professional pilot’s flight bag. It is currently available for all pilots of pressurized aircraft in the United States, a market that could mean tens of thousands of customers. In the future, Pappas plans to offer the technology to international markets as well.

Alt Alert features an alarm and LED light that alert pilots when the cabin pressure is compromised. Typically, aircraft maintain cabin pressures that are consistent with an altitude of 8,000 feet or so.

“If you are at 35,000 feet, the cabin should have pressurization measuring anywhere from 8,500 to a maximum of 10,000 feet,” Pappas says. If the pressure inside the cabin falls below the equivalent of 10,000 feet, the device makes an advisory chirp and the LED flashes. If the pressure-altitude exceeds 12,500 feet, a 30-minute timer starts, and if it stays above 12,500 feet but below 15,000 feet for longer than 30 minutes, an un-mutable, sustained alarm will sound and the LED will flash. “This same alarm mode will be in effect if the aircraft cabin pressure exceeds 15,000 feet for any period of time,” Pappas says.

These alarms are designed to go off well before the advanced onset of hypoxia. Once alerted, the pilot can identify and correct the pressurization issue or immediately reduce altitude and use supplemental oxygen.

“Oftentimes, pilots don’t realize their pressurization system has failed. If it does fail, or simply was not turned on prior to flight, and the pilots have adequate notification, they will have ample time to take action,” says Pappas. “It could save lives.”

Abstract
In 2013, San Diego-based Aviation Technology Inc. obtained an exclusive license for the technology behind the cabin pressure monitor invented at Kennedy Space Center and built its own version of the product. The Alt Alert is designed to save lives by alerting aircraft pilots and crews when cabin pressure becomes dangerously low. 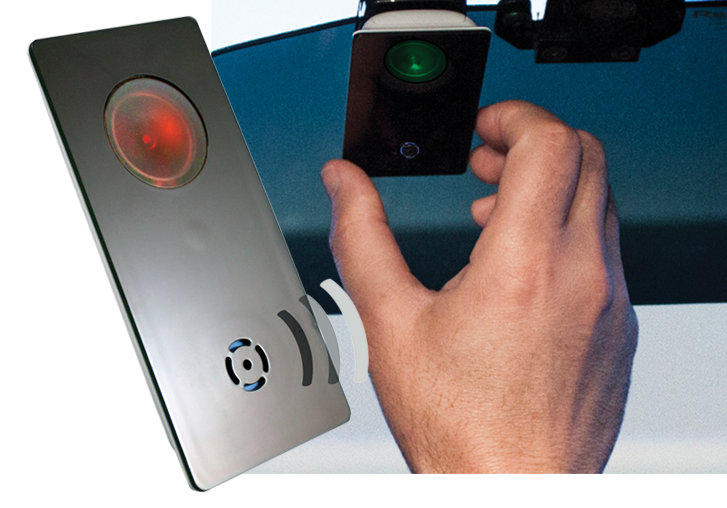 Aviation Technology Inc.’s Alt Alert cabin pressure monitor uses a flashing, red light combined with either advisory chirps or sustained alarms, depending on the seriousness of the situation, to alert pilots and crewmembers to a loss of cabin pressure. The device can be secured to a visor with a clip, but it can also use a suction cup to attach to a window, or Velcro for mounting on an instrument panel.

Once the Alt Alert warns a pilot of a dangerous drop in cabin pressure, which also means low concentrations of oxygen, the pilot can don an oxygen mask and either correct the malfunction that led to pressure loss or simply descend to a lower altitude.