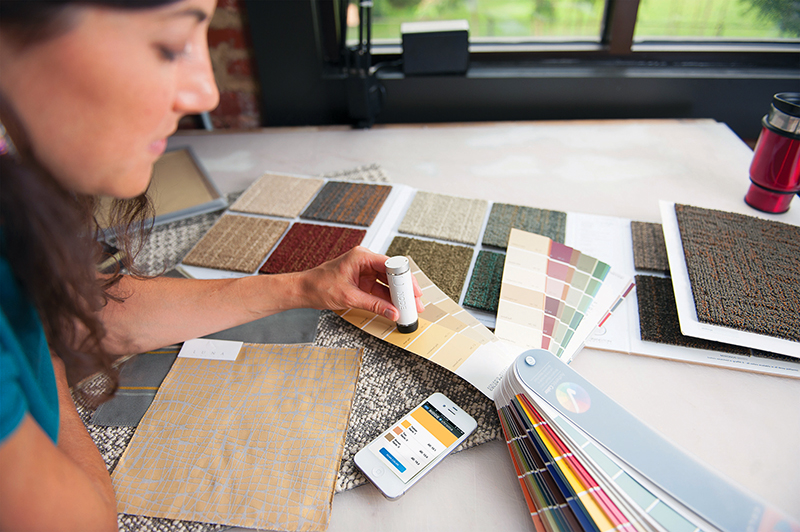 In 2007, when the Department of Homeland Security (DHS) issued a call for a sensor that could equip a smartphone with the ability to detect dangerous gases and chemicals, Ames Research Center scientist Jing Li had a ready response. Four years earlier, she led a team that wrote a paper on the use of carbon nanotube sensors for gas and organic vapor detection, which would later receive Ames’ 2012 H. Julian Allen award for outstanding science and engineering papers.

She had been developing the use of single-walled carbon nanotubes that respond to various gases and compounds for use in NASA applications, such as evaluating planetary atmospheres, detecting chemicals around rocket launch pads, and monitoring the performance of life-support systems. Her proposal in response to DHS’s Cell-All initiative was awarded funding through an interagency agreement in 2008. What she still needed was a way for the device to “sniff” the air for samples and a system that would allow it to interface with a smartphone.

Li approached George Yu of Genel Systems Inc. “Genel had the technology to provide a very small sample collection system,” Li says, noting that the company was subcontracted shortly after funding was awarded. In the end, however, that sampling jet proved too noisy, and Li and her team settled instead on a tiny fan. Then a separate contract for the cell phone interface system fell through. “That contract didn’t work out, so I asked George to do it—I know he is good at electrical circuit design,” Li says.

The team settled on the iPhone, which was new at the time, and Li convinced the program manager at DHS that the sensor should be a module attached to the outside of the phone, rather than a system built into the phone’s guts. “This is a very new technology, and there will be a lot of iterations. Making it interchangeable will make it easier to update,” she explains.

This modular design not only will pave the way for future smartphone chemical sensors but also presaged the line of interchangeable, smartphone-savvy sensors Yu would commercialize a few years later, after founding Variable Inc. in Chattanooga, Tennessee.

Yu figured out how the sensor module could draw its power from the cell phone battery and use the phone to digitally process the data it gathered and transmit it to a central location, such as a cloud platform. Most of the design for the microprocessor, memory, communication protocol, back-end Web structure, data storage, and cloud technology he developed for NASA and DHS under a NASA subcontract would later appear in Variable’s NODE wireless sensor platform.

Ultimately, Li’s team outfitted each of 40 iPhones with a tiny chip containing 32 carbon nanotube sensors that react to potentially harmful chemicals, such as ammonia, nitrogen dioxide, hydrogen chloride, and chlorine, as well as volatile organic compounds, such as benzene and toluene. Most of the phones have been delivered to DHS and are being tested by technical first responders and trained personnel.

“DHS wants to utilize chemical detection technology incorporated with a cell phone to do global or regional chemical detection,” Li says. If firefighters arrive at a scene involving a toxic gas leak, for example, the device can let individuals know how far into the area they can safely go, and the collective data from multiple firefighters carrying the technology can map the extent and boundary of the chemical hazard. “Then they can make decisions based on the detection results at certain locations,” says Li. All this is accomplished without requiring anyone to carry an additional device—in almost all cases users are carrying cell phones anyway.

“It became immediately clear that this integration of nanosensor technology in combination with a cell phone is extremely powerful,” Yu says. To launch his commercial line, however, he began with simpler technology.

Building on the integration system he developed for the Cell-All initiative, Yu developed his NODE platform—a cylinder not much bigger than a man’s thumb that can transmit data from sensors to a smartphone or other smart device and that also has its own memory port capable of storing data to be uploaded to any computer. Unlike the sensor developed for DHS, NODE operates independently of the cell phone and transmits the data to the phone or other device using Bluetooth wireless technology.

Variable converted off-the-shelf sensors, such as infrared thermometers, color referencers, motion sensors, and barcode readers, into interchangeable modules that can be snapped onto either end of NODE, so it can use two modules simultaneously. Echoing the Cell-All project, there is a module for carbon dioxide detection and another that senses carbon monoxide, nitric oxide, nitrogen dioxide, chlorine gas, sulfur dioxide, and hydrogen sulfide. Another module measures ambient light, room temperature, humidity, and barometric pressure.

“Using a common platform for multiple sensor modules, you save a lot of money through economies of scale,” Yu says.

The product line went on the market in 2012, and by summer of 2014, it was already in its second generation, NODE+, which Yu says is faster, uses less power, is more durable, has more memory, and is compatible with Android devices as well as Apple smart devices.

Yu says the sensors have found extensive use in the areas of supply-chain management, transport, and logistics.

An early adapter of the technology was the pharmaceutical industry. “Their packages are extremely high-value, and the cost of shipping penicillin across the country is so high that this type of sensing device is of huge value for them,” Yu says, noting that a sensor embedded in a package can record temperatures and vibrations and then report that information to a smartphone.

A company that deals with paints or other color-specific products can use one of the Chroma sensors for quality control, just as one that deals with food can use the infrared thermometer or thermocouple probe for temperature assurance.

“As we started deploying this product, we got a huge amount of feedback from our customers,” Yu says, adding that the response resulted in, among other developments, the suggested pairings of sensors on the company’s Web site. Since each NODE can house two sensors, someone doing temperature control, for example, can take a temperature reading and then flip the device around to scan a product barcode that would show which product the reading applies to.

All the data can be automatically recorded on the accompanying smart device, saving time and cutting down on user error.

“Variable is also a solutions partner for the ‘Internet of things,’” says Alex Lavidge, the company’s vice president of business development and marketing. “We use NODE+ as a platform to gather market intelligence from our clients and innovation partners. From these studies, we determine how we can integrate mobile sensor features in the future that add the most value for targeted segments in both the private and public sectors.” Lavidge says a lot of these trials are currently centered around integrating sensors with wearable technology like smart safety goggles, as well as other sensor hardware concepts that can be integrated with big data analytics platforms to help end-users make “smarter decisions faster.”

To solicit further input, in the summer of 2014, Variable held its international Hackanode challenge, offering a total of $16,500 in prizes in various categories to developers who build or integrate existing sensor functions with the NODE+ platform using their own apps. Among the 10 judges were Apple cofounder Steve Wozniak and Tom Suder, president of the mobile Government technology organization Mobilegov.

Even before the contest, independent developers had created numerous apps for the platform.

It has also received widespread attention within the computer and technology industries. CNN Money magazine called NODE the coolest gizmo found at the Consumer Electronics Show 2013, and the company was named Most Innovative Startup at that year’s Southland technology and entrepreneur conference. NODE was a finalist in the Spark Awards’ 2013 International Design Competition, the Made in the USA category of Walmart’s 2013 Get on the Shelf competition, and the Tech for a Better World category at the 2014 Consumer Electronics Show.

Variable now has 25 employees, about a third of whom are manufacturers. The devices are built right in Chattanooga.

Yu says the company is now working to incorporate the sort of nanotube sensor technology he integrated with iPhones during his work with Li.

Li says she, too, hopes to develop her sensors to the point that the price can be brought down enough to make them viable consumer products.

“Hopefully we can continue this work, because this technology can be used for many application areas, like industrial, environmental, and in space,” she says.

Abstract
In 2007, George Yu helped Ames Research Center integrate a sensor for detecting dangerous gases and chemicals with a smartphone. Most of the design for the microprocessor, memory, communication protocol, back-end web structure, and data storage Yu developed under this NASA subcontract later appeared in the wireless sensor platform he created after founding Chattanooga, Tennessee-based Variable Inc. The award-winning NODE+ platform integrates a line of off-the-shelf sensors with smart devices. 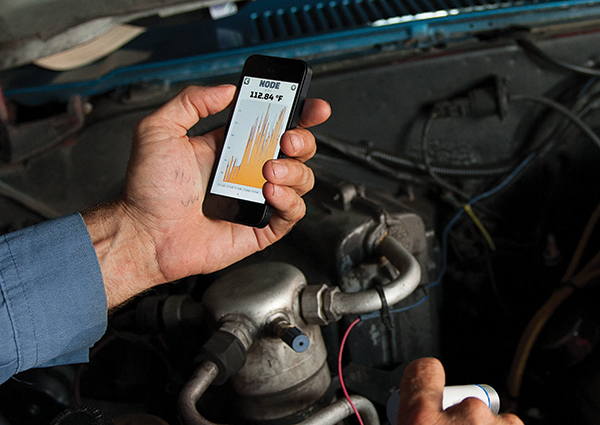 NODE’s Therma modules detect temperature at a distance and have proven popular in the food service, auto repair, manufacturing, and home inspection industries.

The NODE platform can be outfitted with an array of different sensor modules for detecting light, gases, temperature, motion, and more. It can store data or transmit it to a smart device using Bluetooth wireless technology. 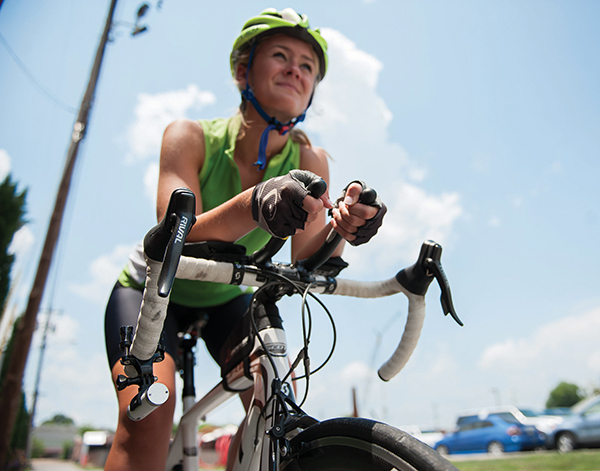 The NODE+ platform, shown here attached to the bicycle handlebars in the bottom left, tracks motion with a gyroscope, accelerometer, and magnetometer. It can also let a whole host of other sensors—up to two at a time—communicate with smart devices.

The NODE Chroma color sensors let the user upload a custom color set and reference colors against a library of hues.