Technology often takes circuitous paths. A magnetron developed for precision bombing during World War II led to the microwave oven, and a battery-powered drill created for collecting samples of Moon rock gave birth to the Dustbuster. Likewise, one student’s NASA experience with cutting-edge, autonomous robotic vehicles has informed the creation of one of the world’s most sophisticated coffee machines.

In 2006, Matt Walliser, now chief engineer at San Francisco-based Blossom Coffee Inc., took on an internship at the Carnegie Mellon Innovations Laboratory at NASA Research Park, part of Ames Research Center. He was a high school student at the time but continued his summer work at the lab and at Ames’ Exploration Aerial Vehicles (EAV) Laboratory for the following three summers while working toward his mechanical engineering degree at California State Polytechnic University, Pomona.

“I was mostly doing hardware support for a couple of robotics projects and a little electrical design work associated with that,” Walliser says. He worked with the MAX 5A Unmanned Ground Vehicles and the EAVs, all test platforms for intelligent, autonomous robotic systems.

“Matt was unusually gifted at robotics, especially fast prototyping,” says Corey Ippolito, flight data systems engineer at Ames, who ran both labs during Walliser’s time there. “He designed mechanical structures, designed solid models in [computer-aided design], and would take these designs to a local machine shop and fabricate them. He was very good at embedded software development.”

Since 2002, NASA has been collaborating through its research park with academic institutions, as well as nonprofit organizations and commercial companies, and Ippolito says working with students helps to keep NASA engineers tuned in to the latest research. “It’s always good to have the students bringing ideas and to have us working with universities.” The EAV Lab focuses on testing experimental autonomous control technologies on custom-made, scaled-down vehicles such as the EAV line and the MAX 5 rovers.

It was his work on one such class of control systems—proportional-integral-derivative (PID) controllers—that laid the foundation for the key component in Blossom’s coffeemakers, Walliser says.

Ippolito describes PID control as a classical control technique that continually monitors and corrects the output of a controlled system through error feedback. The technology is common on rockets, missiles, and other aircraft, he says.

“It’s used pretty heavily in industrial robotics and any kind of precision system,” says Walliser, noting that he was introduced to PID systems on the MAX 5, where, for example, they keep the rover moving at a constant speed even as it traverses rough, uneven terrain. In Blossom’s coffeemakers, the technology is used to hold temperatures constant in both the water boiler and brew group.

The Ames laboratories also provided Walliser with his introduction to embedded communications, the frameworks that allow different components within the same device to communicate with each other, chip to chip. Ippolito says the technology is common in the EAV Lab’s systems.

“It was my first exposure to that kind of intersection between electrical systems and software,” Walliser says. “Certainly, what I did at NASA exposed me to a lot of these concepts of embedded development I used for Blossom.” In the coffeemakers, which are Wi-Fi-enabled, embedded communications are used to synchronize brewing processes with recipes stored in the cloud. Walliser also used this knowledge base to write his own stripped-down operating system for the machines, one that he says is faster and more reliable than Android.

“At NASA I did a lot of repairing and debugging of other people’s work,” he adds, noting that troubleshooting electrical systems is also fundamental to his current work.

The internships at Ames were not NASA’s first influence on Walliser’s career, though. In high school, he participated in the NASA-sponsored Botball Educational Robotics Program. “I already knew I would go into engineering, but Botball really let me challenge myself to learn new things,” he says, adding that this was where he learned C programming language and developed core engineering skills.

Blossom Coffee was formed in 2011, after now-president Jeremy Kuempel approached Walliser with the idea for a high-end, precision coffeemaker. “It seemed interesting, it played to my strengths, and it hadn’t really been done before,” Walliser says.

The main problem to solve was temperature control. Coffee made from the same beans can taste significantly different when brewed at different temperatures, Walliser says. “Most coffee machines will control the temperature within 5 to 10 degrees, but the average coffee drinker can tell the difference between coffees brewed as little as 2 degrees apart.”

Blossom’s machine, called the Blossom One Brewer, controls the average temperature to within one degree. It also keeps all the coffee grinds within 10 degrees of each other, regardless of their place within the brewing basket, a temperature gradient significantly narrower than in most coffeemakers, and it automatically corrects heating and fluid delivery for altitude, barometric pressure, and ambient temperature. All this is accomplished using the PID control-loop technology Walliser learned at Ames.

Tight temperature controls allow the user to consistently produce the same brew. They also let the machines change temperature from one cup to the next within a few seconds. Recipes for different beans can be shared and downloaded via Internet and implemented more or less automatically.

Walliser calls the coffeemakers “semiautomatic,” noting that, while they control temperature and extraction time, the grind and the stirring time are in the hands of the barista, making the brewing process flexible. “It’s still a craft product, and you still need training to use it, but it takes over the things that are difficult to control by hand,” he says.

The first prototype Blossom Limited machines went on sale in 2013 for $11,111. By early 2015, the company had set up production in Japan and was offering the Blossom One for about half the price of the prototype. The current product is a single-cup brewer marketed to cafés and coffee shops, but Walliser says the company hopes to offer aversion in the future.

Walliser credits the freedom interns have while working in the NASA labs. “Being able to do engineering in a self-directed manner isn’t an experience you usually get in high school, or even college,” he says. “Having that kind of real-world experience really allowed me to excel in school and build the skills I have today.” 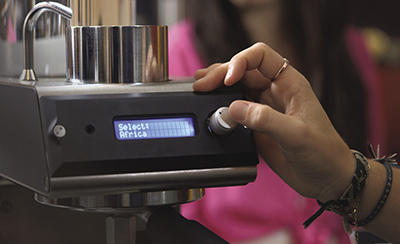 The Blossom One Brewer is Wi-Fi enabled, and brewing processes can be synchronized with recipes stored in the cloud. 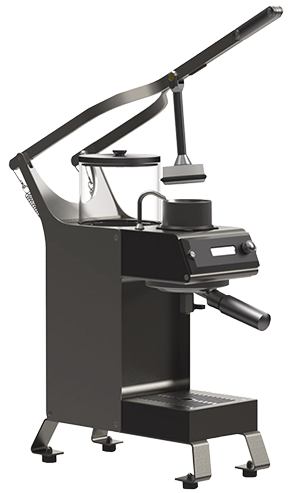 The Blossom One Brewer draws heavily on Blossom Chief Engineer Matt Walliser’s four summer internships at NASA’s Ames Research Center, where he learned to work with the kinds of technology that enable the coffeemaker to hold brew temperatures steady and synchronize brewing with recipes stored in the cloud.