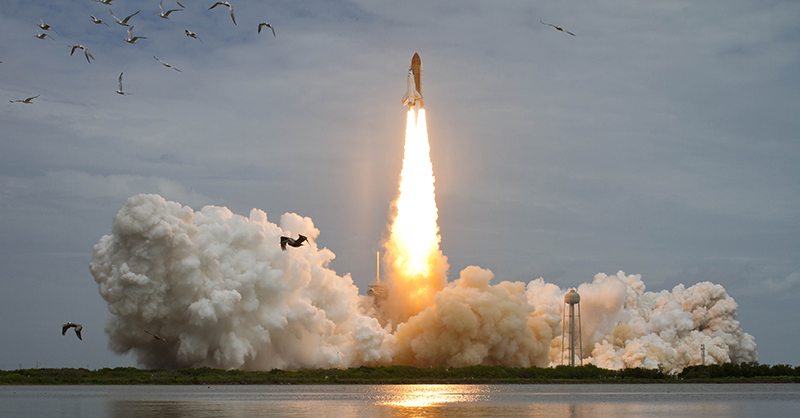 Astronauts know their bodies will be tested during time spent on the International Space Station (ISS), from the multiple sunrises and sunsets per day wreaking havoc on their circadian rhythms to the lack of gravity causing bone-density and muscle loss. NASA is conducting research to counteract these otherworldly conditions to enable long-term human exploration of space—for example, special lighting helps induce sleep, and rigorous exercise schedules help keep astronauts’ bodies healthy—but bone loss continues to occur.

Jacob Cohen, chief scientist at Ames Research Center, says NASA scientists and other researchers know this loss is driven by loading and unloading, or the absence of gravity’s pull on the body. Understanding how the body responds to the space environment will allow NASA to develop more effective countermeasures for long-duration missions—and help fight diseases encountered on Earth.

Amgen, a biotechnology company based in Thousand Oaks, California, has been working on new treatments for osteoporosis for many years. Teaming up with Louis Stodieck, a research professor at the University of Colorado at Boulder and director of BioServe Space Technologies, Amgen worked with NASA to devise a rodent-based experiment that could benefit astronauts and earthbound humans alike.

“The idea is, you can assess how things might occur in humans if you have good animal models that can predict what the human response is going to be, both to the environment as well as to any countermeasure you might want to test to mitigate any issues of that environment,” Stodieck explains.

In this case, it meant subjecting a group of mice to a short trip to space. Using the Commercial Biomedical Testing Module (CBTM) designed by researchers at Ames, 15 mice, all about 10 weeks old, were given a sclerostin antibody molecule developed by Amgen one day before launch, while another 15 mice of the same age were given a placebo treatment, says Chris Paszty, the company’s research lead for the sclerostin program. Another two groups of mice stayed behind on Earth and were given the same treatments at the same time.

Sclerostin is a protein secreted by bones that notifies the body to dial down the formation of new bone by acting like a brake in a car, Paszty says. The sclerostin antibody, which blocks sclerostin, “lets up on the brake” and allows for increased bone formation, which results in increased mineral density and improved bone structure and strength. The hypothesis for the 2011 Space Shuttle experiment was that the bones of the mice injected with the sclerostin antibody before going into space wouldn’t be as negatively affected by the two-week exposure to microgravity as the control groups that had received placebos.

“We know that sclerostin production in bone is regulated by mechanical loading, but what we didn’t know was if you completely unloaded the skeleton’s bone formation pathway, which is essentially what happens in microgravity, whether our molecule that blocks sclerostin would still result in increased bone formation and bone strength,” he says.

It’s possible to simulate the effects of microgravity on Earth by keeping human test subjects in bed for months at a time, but the opportunity to get real data from space provides a more accurate picture of the conditions astronauts face.

“There are some unique attributes of space that make for potentially very interesting animal models that can be used to evaluate the effects of therapeutics for bone and muscle atrophy and muscle wasting and so forth that aren’t as easily tested in humans,” Stodieck says. “The other challenge with testing in space with human astronauts is, of course, there are very few of them. The sample sizes are very small.” Rodents, by contrast, can be flown in large numbers using few resources.

In addition, experiments on mice make very efficient use of time. With humans, a six-month stint in microgravity can only yield so much information on the long-term effects of living in space. But with rodents, whose lifespan is so much shorter, even a two-week trip can reveal biological trends and effects that can be scaled into useful data on what might happen in the human body over a longer period of time.

When CBTM launched with Space Shuttle Atlantis in July 2011 for the sclerostin antibody experiment, the mice on board were in for a shock. Like humans, mice are subject to some initial discomfort when they leave full gravity, and from observations made during these missions, it was apparent they were confused, grabbing on to the sides of their enclosure and then each other before learning how to navigate their new environment. Unlike astronauts, rodents’ bodies are incapable of alleviating nausea by vomiting. “You’re never going to see a mouse toss its cookies,” Stodieck says. “It’s not going to happen. But within a few days, they are completely adapted. They free-float, they move around with ease, they’ve learned how to essentially fly and glide and eat and drink, no problem.”

When the mice returned to Earth two weeks later, the results of the experiment were promising. “What we found was that the mice that had received our sclerostin antibody had increased bone formation and improved bone structure, and even increased bone strength,” Paszty says. “That’s exactly what we’ve found here on Earth. We were very pleased to see we had gotten the same results in space.”

Amgen has been involved in three rounds of experimentation with Stodieck and NASA in space involving mice, flying experiments on STS-108 in 2001 (a bone-loss study); STS-118 in 2007 (a muscle wasting/atrophy study); and STS-135—the Shuttle program’s final mission—in 2011 (a bone-loss study). These studies each used different test molecules that blocked three different targets in three distinct biological pathways.

“For musculoskeletal issues, microgravity is really a unique model of disuse, what I would consider extreme disuse,” says Stodieck. “If you take a human or an animal and put them in microgravity, they will lose muscle and bone at rates that are incredibly fast, much faster than a patient on Earth suffering from osteoporosis. They’ll lose bone at a rate 10 times faster in space than that individual.”

It’s the Earth-based versions of bone loss and muscle loss that have been part of Amgen’s research over the years. Indeed, Amgen’s first space experiment (STS-108) was in the area of bone loss and used an engineered version of a protein called osteoprotegerin. As it turns out, Amgen’s focused research in that biological pathway resulted in the FDA’s 2010 approval of the company’s drug, denosumab, which is marketed under the brand name Prolia.

Amgen and UCB Pharma, its corporate partner on the sclerostin program, currently have a clinical candidate sclerostin antibody (Romosozumab) in Phase 3 trials. “The drug that Chris is helping to bring into the market, the sclerostin antibody, is really going to shake things up,” Stodieck says. “It can substantially reverse bone that has gotten very fragile, as opposed to just preventing it from breaking down further. It has the potential to help a lot of people who have gotten into a very weakened state. It’s one we’re pretty excited about.”

If astronauts suffer bone and muscle loss from a few months in space, a mission to Mars or other destinations could further weaken their bodies, Cohen adds. “How are astronauts ever going to come back to Earth from deep space missions? They’re not going to be able to stand without rigorous exercise combined, potentially, with other therapeutic treatments.” It’s possible that the body will adapt when exposed to microgravity over a long period of time and that bone and muscle loss will plateau, or that partial gravity will be determined to be adequate for maintaining bone density and muscle health, but that still needs to be researched, he says.

Cohen also adds that the development of biological-based countermeasures will lead to astronauts having the ability to produce the drugs needed during a space exploration mission while being months or years away from Earth. This is part of a space-exploration synthetic-biology vision that will allow crew to produce most of the materials and tools to sustain life on demand and at the destination.

There’s an additional benefit to using four-footed travelers for space studies. When the tissues needed for a particular experiment have been collected, there are typically surplus tissue samples available, which provide a rare opportunity for other researchers with an interest in the biological effects of microgravity.

For its tissue-sharing program, NASA issues a call for investigators, either for new research or ongoing work that has previously benefited from tissues exposed to microgravity, to determine where the samples should be distributed. The Agency asks for the amount of tissue needed for examination and what science would be tested, and the submissions are peer-reviewed to ensure the best candidates are selected. The tissue collected during the Amgen flight continue to result in high-quality, impactful, peer-reviewed publications by NASA tissue-sharing program investigators.

“Any time there’s a spaceflight experiment, there are lots of publications that come out of the tissue-sharing program,” Cohen says. Research aided by these tissue samples also helps NASA meet the Space Biology priorities set every decade by the Academy of Science, which suggests topics for study based on the Agency’s budget and ongoing work.

Going forward, Ames and the team at its Space Biosciences Division have redesigned its CBTM for use on the ISS and have developed other hardware and the support needed to conduct research that maximizes the science return on the ISS. Meanwhile, NASA astronaut Scott Kelly is dedicating an unprecedented full year to living aboard the ISS to further our understanding of how the human body responds to microgravity over long stretches of time.

“The news is more and more filled with all kinds of exciting NASA projects. Things seem to really be coming to an exciting moment in history in terms of space exploration and the potential there,” Paszty says. “For us, that was part of the excitement: not only are we working on bone loss for human disease, but there’s this other part of human endeavor, going into space, and bone loss is a big issue there as well.” 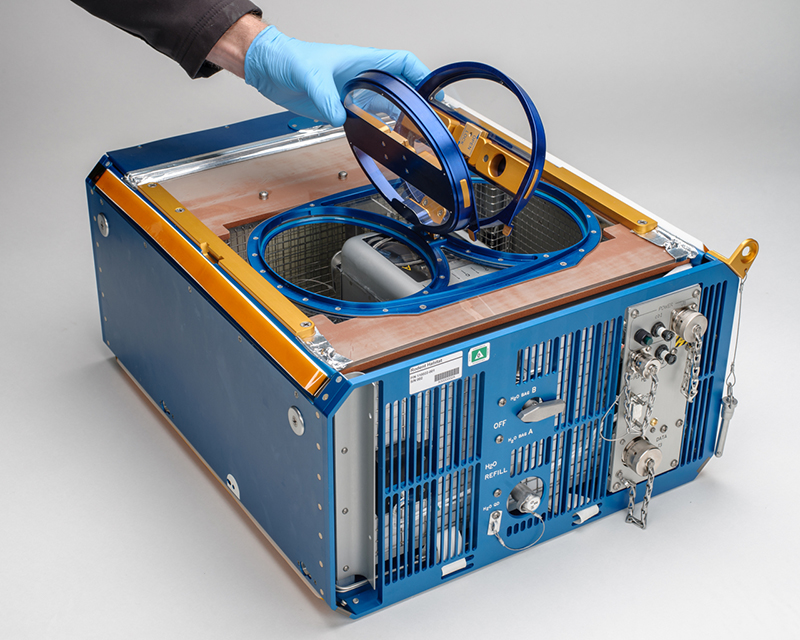 This biomedical testing module, developed at Ames Research Center in Moffett Field, California, serves as a home away from home for mice traveling to space. Previous experiments aboard space shuttles contributed to the development of new drugs now fighting osteoporosis on Earth.

When the final Space Shuttle launched in 2011, it carried with it mice treated with a sclerostin antibody under development by Amgen. The company’s work on bone health treatments is of interest to NASA as it continues to explore ways to protect astronauts’ health in space, but the research has benefits for people suffering from osteoporosis here on Earth.