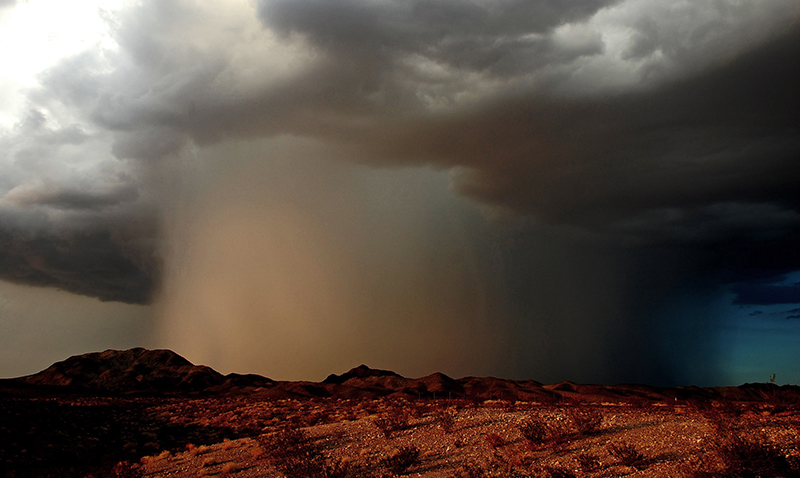 In the American Southwest and in northwestern Mexico, more than half the annual rainfall often comes in the form of the torrential and unpredictable downpours of the North American monsoon. As in monsoon seasons across the tropics, a summertime reversal of winds carries streams of moisture from over the oceans or, in this case, the Gulf of California and Gulf of Mexico, and unceremoniously dumps them on the sunbaked land.

Perhaps the least understood and most erratic weather pattern in the United States, the monsoon brings precipitation that is vital to agriculture and the ecosystem, but it also presents serious threats to life, limb, and property. Severe flash-flooding is common. Roads are washed out. Miles away from the cloudburst, dry gulches become raging torrents in seconds. The storms are often accompanied by driving winds, hail, and barrages of lightning strikes.

The project takes advantage of the fact that scientific GPS calculations have to account for any signal delays caused by humidity. “When we solve for position, we automatically have to solve for the delay caused by water vapor,” says Angelyn Moore, research scientist with the Geodynamics and Space Geodesy Group at NASA’s Jet Propulsion Laboratory (JPL). Moore, the project’s co-investigator, introduced the idea of including a meteorological product alongside the project’s seismological plans and got the National Weather Service Forecast Offices involved.

Other partners include the Scripps Institution of Oceanography, which is tracking seismological events like tremors and earthquakes, and NOAA’s Earth System Research Laboratory in Boulder, Colorado, which has, since the early 2000s, provided half-hourly water vapor estimates from a nationwide GPS network to forecasters and for assimilation into NOAA’s weather models.

Under the project, 37 GPS stations have been added to NOAA’s meteorological GPS network in Southern California, outfitted with either onsite or nearby meteorological sensors.

The GPS stations calculate moisture indirectly based on how long it takes for the time-stamped signals from the GPS satellite network to reach them. The signals are sent on two frequencies, which interact differently with the troposphere, where moisture resides, and the ionosphere, where ionic activity can also delay signals. The charged ionosphere is dispersive, making the delay different for the two frequencies, whereas in the neutral, non-dispersive troposphere, the delay is the same for both. “Under the hood, when we do the calculation, we can tell the difference between the two sources of delay,” Moore says.

Combined with temperature and pressure data also collected at each site, the results are used to calculate what are known as integrated precipitable water (IPW) estimates, which are broadcast every half-hour, and Moore says the team is working to get the interval down to five minutes.

“NASA wanted a technology developed by the Agency that’s useful to somebody outside NASA,” Moore says of the project’s origins. She notes that NASA, and particularly the Earth Science Technology Office, has long worked to help the public predict and respond to natural hazards.

The entire project builds on a network of GPS stations installed in the 1990s for the study of seismic movement and later also used to gather some meteorological data. The geodetic modules developed by the team at Scripps calculate the IPW estimates onsite and transmit them, rather than sending raw data back to a central facility for interpretation. “Each site individually computes its location and water vapor and transmits that directly,” Moore says.

The system is still considered a prototype and a test bed for developing and demonstrating the technology, which is likely to later be more heavily integrated into local forecasters’ tools and NOAA’s Advanced Weather Interactive Processing System.

On the afternoon of July 18, 2013, weather balloon soundings indicated enough monsoonal moisture from the Gulf of Mexico had reached Yuma, Arizona, to cause heavy rains, but it had not, or at least not yet, arrived in San Diego. It was early in the monsoon season, which in Southern California runs from July until mid-September.

“In meteorology, we try to determine how much rain we can get out of the atmosphere by looking at how much moisture is in the atmosphere,” Small says. “When we see IPW really start to go up on the GPS data, that’s when we can make some decisions on how much rain we’re going to get and if we should issue a flash flood watch.”

Whether that moisture is coming from the Gulf of Mexico or the Gulf of California, there’s little warning due to scarce meteorological observations in Mexico.

Before the Earth System Research Laboratory started incorporating data from the meteorological GPS network, forecasters in Southern California relied on data from four weather balloon sites in San Diego, Yuma, Phoenix, and Las Vegas, which report twice a day. Now, though, there were five GPS stations along the Mexican border between Yuma and San Diego, transmitting data every half hour.

By the morning of July 19, the balloon sounding at San Diego showed the moisture had arrived, but it would have been difficult to characterize its movement and extent because no data were available yet from Yuma. Using the GPS dataset, though, forecasters were able to track moisture distribution in real time. Water vapor content began to spike around El Centro, California, between San Diego and Yuma, to levels higher than at either of those other cities.

Based on the information, a flash flood watch was eventually issued for the area, followed, indeed, by several flash flooding events carrying large rocks into the roadway, including two that trapped about 30 drivers on Route 78 northeast of San Diego and another that strewed debris across Sunrise Highway, just east of the city.

“It definitely contributed to their ability to have situational awareness as to how vapor was moving around and to predict flash flooding,” Moore says.

Small says the enhanced density of sensor sites and frequency of reports has demonstrably helped the office with its most important public safety function of issuing flash flood watches and warnings during fast-changing and hard-to-predict events like monsoons. “We can let them know which days are not good days for hiking in the canyons and mountains in our deserts.”

The office’s warnings and forecasts go out to all local television and radio stations. “It’s a big hit with the forecasters,” Small says of the new system.

Forecasters are now working with the project scientists to refine the interpretation of data and develop tools to use it, including the IPW tools being planned for a revision to NOAA’s weather processing system.

Meanwhile, with the accelerometer sensors in the GPS network, which detect seismic motion, JPL and Scripps hope to demonstrate a technology that could save lives in the event of an earthquake. The ability to predict the arrival and intensity of the quake that follows a primary wave would leave between half a minute and a minute and a half, depending on a population center’s distance from the quake, to shut down elevators and gas lines, bring bullet trains to a halt, cease any surgical operations, and otherwise take potentially lifesaving precautions, Moore says. “There are a lot of things you can do if you have 30–90 seconds.”

Abstract
In Southern California, summertime monsoons bring a variety of hazards and are notoriously difficult to predict. In a project funded by NASA_s Earth Science Technology Office through the Jet Propulsion Laboratory, 37 GPS stations were outfitted with meteorological sensors, generating data on air moisture. The National Oceanic and Atmospheric Administration_s San Diego and Los Angeles/Oxnard Weather Forecast Offices use the data to improve monsoon forecasting and issue storm warnings. 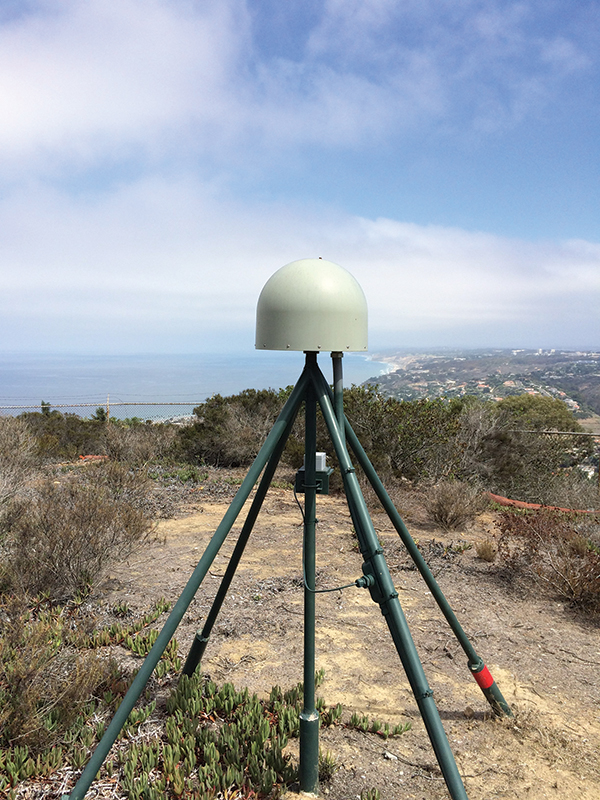 Thirty-seven GPS stations like this one on Mt. Soledad in San Diego have been added to the National Oceanic and Atmospheric Administration’s meteorological GPS network in Southern California. Meanwhile, the Scripps Institution of Oceanography is outfitting the stations with accelerometers to enable early warning of earthquakes. Image courtesy of D. Glen Offield, Scripps Institution of Oceanography 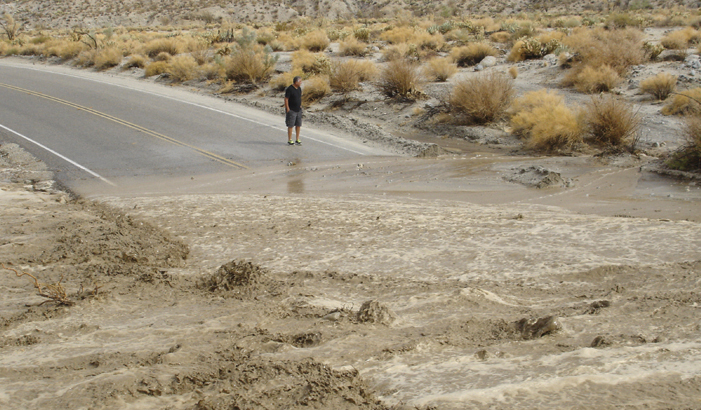 North American monsoons such as this one in Ludlow, California, occur when summertime wind reversals carry streams of moisture inland from over the Gulf of California or the Gulf of Mexico. While bringing needed precipitation, the storms are violent, unpredictable, and dangerous. Image courtesy of Will Wilkens