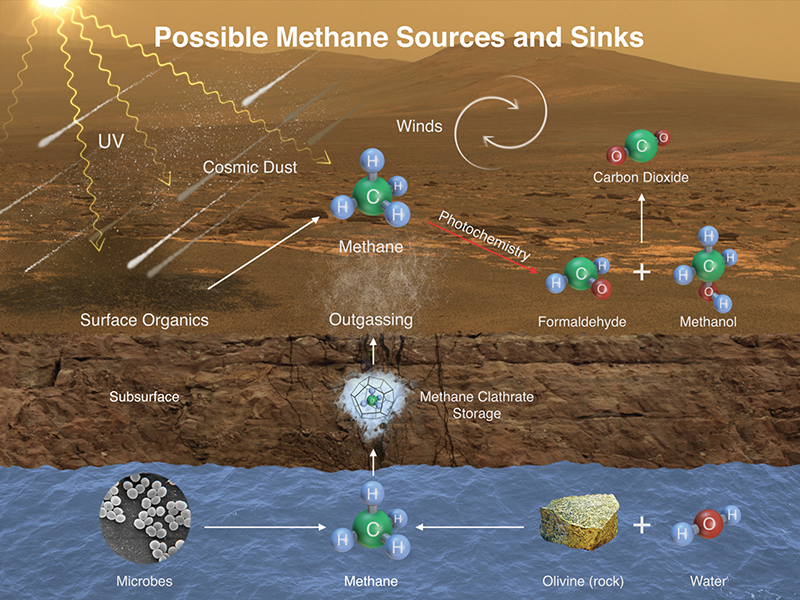 Residing inside the intestines of animals and in marshes, bogs, untreated sewage, ocean sediment, and other places devoid of oxygen are microbes called methanogens. These single-celled, primordial organisms arose more than 3 billion years ago, at a time when the atmosphere lacked oxygen but contained an abundance of carbon dioxide and hydrogen that the microbes metabolized. Their name is derived from the fact that, as a metabolic byproduct, methanogens produce and release methane.

Their knack for thriving on the margins of habitability was on the minds of NASA scientists when, in 2003, plumes of methane were detected on Mars. While the gas could have been created through geochemical processes, confirming its presence on-site and determining how it got there could be a crucial step in figuring out if Mars is, or ever was, host to microbial life. In preparation for the Mars Science Laboratory, also known as the Curiosity rover, in the mid-2000s engineers at the Jet Propulsion Laboratory (JPL) started developing a device that could detect methane and its isotopes, along with carbon dioxide and water. The technology would become one of three gas-analyzing instruments that make up the Sample Analysis at Mars, or SAM.

Known as the Tunable Laser Spectrometer, or TLS, the device works by opening an inlet that lets in either the atmosphere surrounding the rover or gas evolved from solid samples it has acquired. Inside the TLS, mid-infrared laser beams interrogate the gas. Some of that light will resonate with gases such as methane, and, as a result, light will be absorbed. At the opposite end, the detector gauges the reduction of light intensity, alerting scientists to the gases present.

The technology was made possible through NASA investment in lasers and tunable laser spectrometers for Earth and planetary science. Previous room-temperature lasers used for detecting methane were less suitable, as they could only emit light in the visible and near-infrared spectrums. “Methane absorbs much more weakly at those wavelengths,” explains JPL senior scientist Lance E. Christensen, who helped develop the TLS. He adds that, as a consequence, the instrumentation for such a laser has to be made that much larger to capture more signal, resulting in an apparatus that’s very difficult to install on a rover, where weight and volume are at a premium.

As an alternative, the Agency made use of a technology the Microdevices Laboratory at JPL started developing back in the early 1990s called the interband cascade laser. By the time Curiosity’s development got underway, the technology had matured enough for the center to advance a distributed-feedback version of the laser capable of emitting a mid-infrared beam at about 3.3 microns, an ideal wavelength for detecting methane. Its efficiency also allowed the resulting instrument to be made relatively compact.

Those features made it the perfect laser for the TLS, which made its way with SAM to Mars in 2012. As it turns out, the technology would also make an impact on Earth by improving on an important tool used in the energy sector.

Used as both a cooking and a heating fuel, natural gas consists primarily of methane, which, besides serving as a possible marker for the existence of microbial life, also has the dubious distinction of being one of the greenhouse gases responsible for global warming and its damaging impacts on Earth. According to the U.S. Environmental Protection Agency, methane is the second most prevalent and most potent greenhouse gas emitted in the country, and leaks arising from underground pipes supplying energy are a major contributor.

Industry does what it can to detect these leaks, but current methane-detecting devices have the same drawbacks that the interband cascade laser resolved for the TLS. For one, they are bulky—a problem for gas company workers, who have to carry them around for long stretches of time. “These men and women are out there in the hot sun walking these neighborhoods for much of the day,” says Hailey Wilson, a spokesperson for Pacific Gas & Electric, or PG&E, a company that provides energy for most of northern California. The firm is responsible for monitoring its 48,000 miles of pipeline for safety and environmental concerns.

Second, their sensitivity isn’t particularly strong, meaning a detector has to be fairly close to a leak for the alert to sound. A more sensitive instrument is available, but it’s large and heavy enough that it needs to be attached to a car. “You can imagine it not being useful for leaks in yards and other places inaccessible to vehicles,” Wilson says.

Over the next two years, JPL’s Christensen utilized the TLS as a template for making a really small spectrometer. “Because I didn’t need to use hefty space-qualified parts on Earth, it gave me more flexibility to shrink it even more,” he says. The device was then tested by PG&E and went through a few iterations to optimize comfort and usability.

At the close of 2014, Christensen finalized the handheld methane detector’s design. The technology is now ripe for commercial use.

The methane detector has made quite an impression on field workers from the get-go, says PG&E’s Wilson. The device, which she says resembles a stripped-down metal detector, is being lauded for its easy handling. “It’s extremely light compared to what they had before, which were shorter, heavier instruments that had to be held at strange angles to work,” she says.

Then there’s the sensitivity of the instrument, which is much greater than previous handheld versions. According to Christensen, traditional handheld detectors are able to identify about one part methane per million, whereas the NASA-derived tool’s responsiveness is 10 parts per billion—a 100-fold improvement. The increased sensitivity makes it easier to find, for example, tiny leaks that arise from micro-fissures underground. “With this new technology, you can be standing 100 feet away from that kind of leak and it’ll sense it,” he says, “and you’ll be guided to the source like a moth follows pheromones.”

A key innovation developed during the prototyping stage—having a voice that reads the concentration aloud—also makes the task more efficient. That’s in contrast to other models that produce beeping sounds upon sensing the gas. “We’ve found that people have an easier time responding to spoken data measurements,” Christensen says. “And this method is also a better option for those who don’t have sensitive enough hearing to make out changes in pitch and volume.”

For PG&E, the technology is a win all around. “Our workers like the product, we find leaks more easily and quickly, which means safety is that much better, and it’s going to help us reduce greenhouse gas emissions,” Wilson says.

For the firm, supporting innovations such as this in the energy industry is an important goal. “This is not your grandfather’s utility company,” she adds. “We pride ourselves on being ahead of the times. Employees feel really proud that they get to use technology used on Mars to help them do their jobs.”

Abstract
In order to determine whether Mars is, or ever was, host to life, the Jet Propulsion Laboratory (JPL) fitted the Mars Science Laboratory rover with the Tunable Laser Spectrometer to detect methane, a possible sign of microbial life. Through a Space Act Agreement with various organizations, including San Francisco, California-based Pacific Gas & Electric, JPL utilized the technology to develop a handheld methane detector for industry that finds potentially dangerous and greenhouse-gas-contributing pipe leaks. 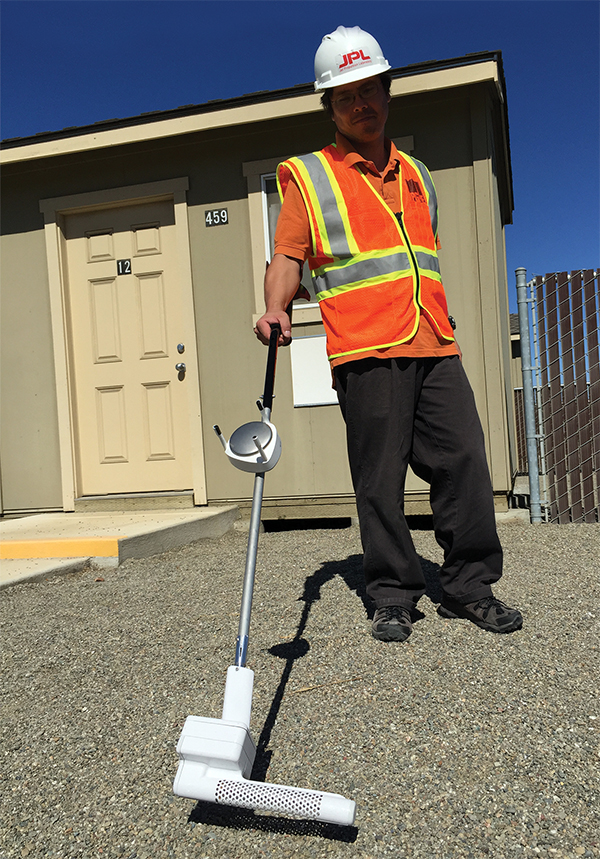 JPL senior scientist Lance Christensen tests the methane sensor he invented. Utility companies will use the device to detect gas pipe leaks, which are potentially dangerous and contribute to global warming.

The image depicts the ways methane might enter and be removed from the Martian atmosphere. Using its Tunable Laser Spectrometer, the Curiosity rover has detected fluctuations of the gas, which, as the illustration shows, could be created by either geochemical or biological means, or both.