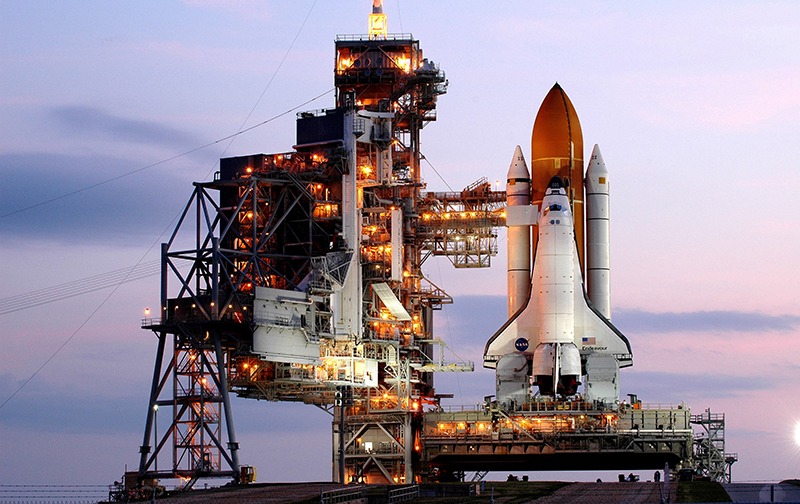 From the Apollo missions through the Space Shuttle Program, NASA has relied on liquid hydrogen as a fuel source for the upper stages of its rocket launches. The reason is simple: Hydrogen is the most efficient propellant there is. Measure for measure, it provides more thrust than any other fuel source.

But harnessing that energy requires a great deal of technological know-how on the Agency’s part. For one, keeping hydrogen in its liquid state means maintaining it at a temperature below -423 ºF. The element must also be insulated from external heat sources during launch, lest it begin to evaporate. Then there’s the persistent threat of leakage. As the smallest and lightest of atoms, hydrogen escapes through the tiniest of cracks. That makes it a hazard, as the element is highly flammable, to the point where high-pressure joint leaks can cause combustion. As a result, detecting leaks is a top priority, but it’s also a challenge, because the gas—and the flame it emits—are odorless and colorless.

Given those stakes, imagine the task of having to monitor liquid hydrogen as it flows through a few miles of pipeline—which is what NASA had to do in preparation for every Shuttle launch, when hundreds of thousands of gallons were transferred from a holding tank to the launch pad for fueling. In the Apollo days, detecting a flame from one of those leaks was accomplished by using the “broom” method, whereby workers would take a broom and walk around with the head stretched out in front of them. If the head began to burn, there was a leak. Later, during the launches of the 1980s and ’90s, they used ultraviolet sensors to detect flames; to find non-burning leaks they began utilizing electrochemical and combustible gas sensors.

But a major problem with those instruments is they can only offer up a general area for a leak. “Sometimes a sensor would go off and, because the leak is in an area with a lot of hydrogen transfer lines, they would have a hard time finding it,” says Luke Roberson, a research scientist and principal investigator of the project in the Chemistry Branch, Materials Science Division at Kennedy Space Center. “So they asked us if we could develop a way of locating a leak visually.”

It just so happens that, in 2003, not too long before that request, the Florida Solar Energy Center (FSEC) at the University of Central Florida (UCF), about an hour’s drive from Kennedy, had received a grant from the Agency to lead a hydrogen research program. Robert Youngquist, head of Kennedy’s applied physics lab, reached out to one of the grant’s principal investigators, Dr. Ali Raissi, and a collaboration was struck between the two organizations and also the Polymer Science and Technology Laboratory to advance a new gas detection technology.

In order to detect hydrogen visually and passively, Raissi conceived of developing a chemochromic tape, meaning the tape would change color upon exposure to the element. To accomplish this, his team worked with a Japanese patent that utilized the palladium oxide (PdO) and titanium oxide (TiO2) class of pigments. In short, PdO and TiO2 are mixed together into a powder, and when hydrogen is present, the powder changes color. The problem with this particular recipe, according to FSEC chemist Nahid Mohajeri, who worked on the technology, was that the color change was slow and it didn’t produce a noticeable enough change. “We had to do a lot of work adjusting the chemistry so that the color change is fast and visible to the naked eye.”

Much of the adjusting was done to the TiO2 mixture, which Mohajeri calls the “support,” as the actual color-changing chemical reaction occurs between PdO and hydrogen. But the color of the support is important because it has to contrast with that of the reaction so a person can clearly see it. Also, in its various iterations, the support can either speed up or slow down the chemical reaction process. Therefore, the team had to develop an iteration of the pigment that had the right color contrast, supported a very fast reaction, and could be applied to a silicone-based tape, which provided the necessary encapsulation properties.

After about two years, the pigment formulation was completed, at which point Kennedy worked to improve and advance the technology for a broad range of applications, including Shuttle launches, which required a more robust version of the technology, as the tape had to be stable in cryogenic environments, protected against flammability, and weather-resistant. To meet those challenges, Roberson, along with fellow NASA scientists and inventors Janine Captain, Martha Williams, LaNetra Tate, and Trent Smith, among others, devised an encapsulant made of Teflon and other matrices instead of silicone. They then tested the new iteration of the tape successfully on cross-transfer lines, fuel cells, and other NASA sites.

Its dependability assured, the technology was first implemented on STS-118, which, as it happens, had an incident where a leak developed at the launch pad. The area sensor technology detected the presence of hydrogen, but the tape enabled crews to pinpoint the exact location of the leak. Afterward, the tape was used for every launch up until STS-134—Space Shuttle Endeavour’s final spaceflight and the program’s penultimate mission.

As a result of developing the hydrogen-detection tape, the Agency and UCF filed for and were subsequently issued several patents. In 2013, the two organizations also agreed to bundle and commercialize the technology jointly; as a result, later that year Mohajeri founded Rockledge, Florida-based Hysense Technology LLC and began production and marketing of the product as Intellipigment.

Hydrogen is one of the most widely used gases in industry. Oil refineries utilize the gas to turn crude oil into gasoline and diesel, and manufacturers mix hydrogen with argon to weld stainless steel. Chemical plants also use the element as a building block for creating ammonia, a key ingredient in fertilizer, and methanol, an important constituent in many polymers.

And just as NASA is keen on monitoring leaks from a safety standpoint, so is every other industry that deals with the highly reactive and flammable gas. Mohajeri says the traditional technologies that companies work with have their drawbacks.

“Stationary sensors have a shelf life and, depending on where they’re located, they might not be able to detect every area that’s susceptible to a leak,” she explains. “And the handheld ones require technicians to walk around and listen for a beeping sound. What if there are two flanges near the beep that are very close together? It could be that one is leaking and the other one isn’t, but the sensor can’t make out the difference.”

That’s where the company’s Intellipigment tape comes into play. “With this new technology, all they have to do is wrap the two flanges with the tape, and they’ll directlyin on the source of the leak,” she says, noting that it’s easy to spot the problem area, as the beige tape will turn black.

As for how long it takes the tape to undergo the chemical-induced color change, if 100 percent hydrogen is being used, results come within 10 seconds. Mohajeri adds, “We also tested leaks that contain as little as 1 percent hydrogen, and we saw a reaction time of three minutes, which is very good.”

Although the product has been commercially available for only a short period of time, and despite it being unlike any gas detection technology that came before it, a number of companies across the swath of industry have taken to using the tape, and many of them have already placed a second round of orders.

Adding to the technology’s promise, in 2014 R&D Magazine awarded HySense, Kennedy, and UCF an R&D 100 Award for its development, and in that same year HySense won a $100,000 first-place award at the CAT5 Innovation Competition, which honors and supports early-stage companies that offer “powerful, disruptive” technologies.

“I’m very hopeful, as all the indications are telling me that this product will be a success,” Mohajeri says.

The technology was also shown interest by the automobile private sector as the Space Agency carried out potential applications discussions with several car companies in their development of hydrogen and hydrogen fuel cell automobiles. NASA also contributed its expertise to the Hydrogen Highway project: an initiative led by the Department of Energy that aimed to proliferate hydrogen refueling stations in order to make such automobiles commercially viable.

According to Kennedy lead polymer scientist Martha Williams, public and private partnerships such as these, along with the technology’s successful commercialization, play an important role in the Agency’s overall mission.

“We’re always thinking in terms of the big picture,” she says. “As we solve problems for NASA, we’re also figuring out the best ways to transfer the technology successfully. This detector tape is a great example of that.” 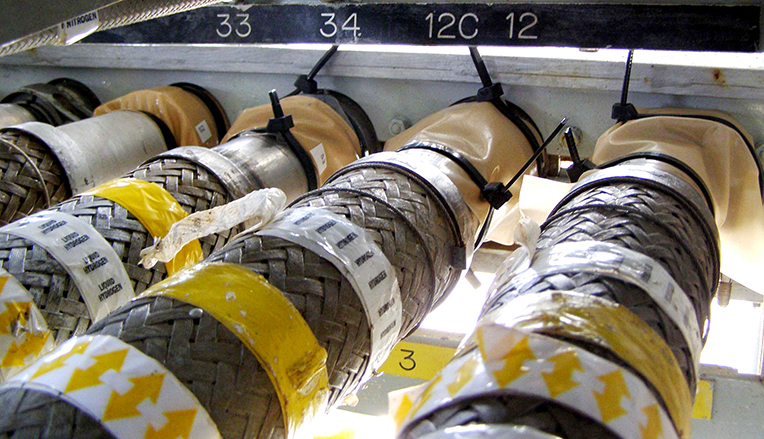 A leak developed in the Space Shuttle Orbiter Midbody Umbilical Unit, or OMBUU, which loads liquid hydrogen and liquid oxygen into the spacecraft’s fuel cells. A color-changing hydrogen-detection tape, seen in beige, which was developed by Kennedy Space Center and the University of Central Florida in the mid-2000s, was applied to the OMBUU and helped to detect the leak’s source. The technology went on to be used for every subsequent Shuttle launch up until STS-134, the program’s penultimate mission.

The tape is easy to apply, and problem areas are easy to spot because of the sharp color change. Intellipigment is sensitive enough to detect leaks that contain as little as 1 percent hydrogen. 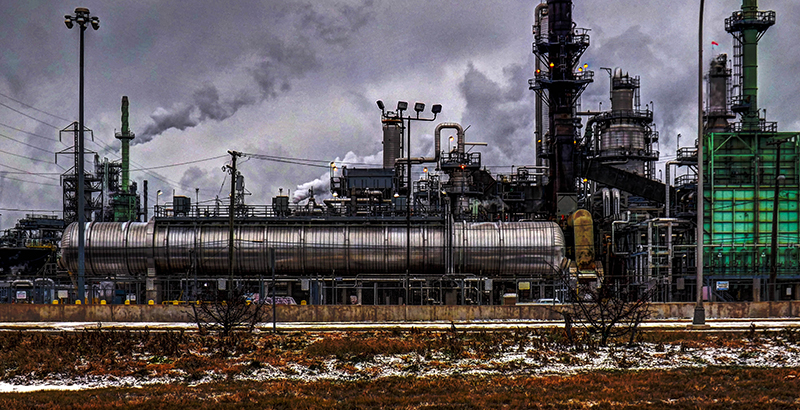 Space Shuttle Endeavour arrives at launch pad 39A on August 9, 2007 in preparation for mission STS-118.