Taking topographic measurements with single photons in broad daylight means pushing the limits of precision, and this is what Sigma Space Corporation set out to do with its impossible-sounding single-photon lidar (SPL) Earth-imaging technology.

The result is an airborne device that splits a single laser beam into 100 low-power beamlets directed at different points on Earth’s surface, firing at a rate of 32,000 pulses per second and then detecting individual photons reflected back to it, distinguishing them from a storm of sun-generated photons, and determining how long each photon’s round trip took to an accuracy within about 20 picoseconds, or twenty-trillionths of a second. In this way, the lidar creates a 100-pixel, three-dimensional image with every pulse, which is then integrated into a contiguous, high-resolution image by an optical scanner matched to the aircraft’s ground speed. Furthermore, the lidar uses a fraction of the energy typical of conventional imaging lidars.

A system with this sort of capability, however, was not born overnight.

The technology draws heavily from a half century of satellite laser ranging, going back to 1964, when then-physics co-op student John Degnan, now the Lanham, Maryland-based company’s chief scientist, arrived at NASA’s Goddard Space Flight Center just in time to participate in the world’s first laser satellite ranging experiment. The project successfully timed the round trip of laser pulses fired from Earth and reflected back from a satellite in low-Earth orbit to determine its location to an unprecedented accuracy of 10 feet.

Meanwhile, it occurred to Degnan to try reversing the direction of laser ranging. “If I can see the slope in that data for a satellite due to orbital time bias, why can’t I see a slope on the ground?” he asked.

His ensuing proposal, funded by NASA’s Instrument Incubator Program, bore fruit more quickly when NASA’s Airborne Multi-Kilohertz Photon-Counting Microlaser Altimeter flew over the Eastern Shore of Maryland and Virginia in 2001. The experimental system, which Sigma also worked on, demonstrated the ability to map Earth’s surface by catching individual reflected photons from a height of 23,000 feet and was even able to see forest floors through the canopy, as well as ocean depths down to a few meters.

“The fact that we could actually detect single photons in broad daylight—that had never been done before,” Degnan says. “With single photons, we could do things a lot faster, with less energy and smaller instruments.”

In 2003, Degnan retired from Goddard and started his work at Sigma, bringing four decades of NASA laser ranging experience with him. In the ensuing years, the company licensed two of his NASA patents—the Space Act Award-winning microaltimeter patent and a 3D-imaging lidar patent. Sigma was later awarded additional patents for improvements to the technology.

Under an SBIR contract with the U.S. Air Force, the company built on the NASA microaltimeter prototype to create the 100-beam Leafcutter, a low-altitude SPL imager capable of seeing underwater and through tree coverage for military reconnaissance. The instrument has a spatial resolution of 15 centimeters at an altitude of one kilometer.

With funding from follow-on contracts with the Department of Defense and NASA, as well as Sigma’s own money, the High-Altitude Lidar and High-Resolution Quantum Lidar System (HRQLS) followed. These were designed to operate at 25,000 and 7,500 feet, respectively.

All the imagers are based on a similar design: 100 streams of laser pulses are sent out from a 10-by-10 array of emitters, with a matching array of ultrasensitive photodetectors picking up the returning photons. A 100-channel timing system records photon departure and arrival times at laser pulse rates up to 32,000 per second, allowing 3.2 million measurements every second.

Photons reflected from the surface can be distinguished from sunlight because they arrive more or less all at once, and the more uniformly distributed solar noise can be removed in post-processing, explains Roman Machan, Sigma’s chief technology officer and creator of the systems’ timers. “You’re looking for structures, and all of those will return lots and lots of points next to each other.”

Because the aircraft barely moves in the time it takes the laser pulse to reach the surface and return, the same gaps in tree canopy that allowed the photons to reach the forest floor also allow their return to the system’s receivers, he adds.

The technology is able to penetrate water because it uses light in the green, 532-nanometer wavelength, rather than the near-infrared frequencies most other altimeters use.

The ability to cheaply and accurately map surface features across large areas has a multitude of applications, even without factoring in the ability to see through water and tree cover. While the Air Force was interested in foliage-penetrating reconnaissance, and other agencies have worked with Sigma on a system for spotting underwater mines and submarines, HRQLS can also serve such civilian purposes as rapid, wide-area surveying or seeing whether train tracks are warped or trees are infringing on power lines.

By flying at high altitudes, the device can map swaths of up to a few kilometers, making surveys of broad areas faster and more affordable. While the company has built a number of systems for Government clients, Sigma is now more interested in selling its data-gathering services, which is why the highly flexible HRQLS system was built.

With a grant through NASA’s Carbon Monitoring System, the University of Maryland recently worked with Sigma to map and quantify the forest cover, or biomass, of all of Garrett County, Maryland. The company was able to map the 1,700-square-kilometer area with a horizontal resolution of a few decimeters in about 12 hours, using half-overlapping flights.

“It’s cost-effective now to do an entire state or to do a whole country because of improvements in how much area we can cover,” Machan says, adding that this ability marks a paradigm shift for the lidar market, where current technology limits the size of such image collections due to high costs and low coverage ranges.

The company has been in talks with one agency that wishes to map an entire country in Africa. The work would monitor tree coverage, ensuring compliance with arboreal cap-and-trade agreements, and would also be useful to oil companies and others who need to know the topography beneath that canopy to plan pipelines, roads, and other infrastructure.

“Once you have a 3D map, you can use it for any and all of the above types of things,” Machan says.

Various states have talked with the company about having large portions or even the entirety of the state mapped, and one company approached Sigma with an interest in mapping the Chesapeake Bay. “We’re just at the point where a number of commercial customers are interested in having us start flying over really large areas,” Machan says.

The company still works closely with NASA. In 2010, Sigma provided components of Goddard’s airborne, photon-counting Multiple Altimeter Beam Experimental Lidar (MABEL), a test bed for the technology—again, much of it provided by Sigma—that will fly on the Agency’s Ice, Cloud, and Land Elevation Satellite 2 (ICESat-2).

“With photon counting, we’re able to get the same resolution with much less light than we would with other methods,” says Anthony Martino, instrument scientist for ICESat-2 at Goddard. The mission, scheduled to launch in 2017, will use multiple single-photon lidar beams to monitor changes in ice coverage at the poles, as well as watch tropical forest coverage. “The scientific goals of ICESat-2 are primarily to measure changes in the heights of polar ice sheets and thickness of ice in the polar oceans, and secondarily to measure the thickness of vegetation in lower latitudes,” Martino says.

This is a follow-on to the first ICESat mission, which flew between 2003 and 2010. The original ICESat altimeter had a single laser that used about 100 times the energy per pulse that ICESat-2’s six beams will use together, until the laser failed, with the result that the device had to conserve laser life by operating just a few months each year. “Instead of using a single, powerful pulse, now we’re using a lot of weaker pulses for the same resolution with less stress on the laser,” Martino explains.

From an altitude of about 500 kilometers, ATLAS will fire its six beams around 10,000 times per second—as opposed to the original ICESat’s 40 times per second—and 60 detector channels will register returning photons, creating an image by averaging the results of every 100 pulses or so. The price of a more reliable laser, Martino says, is the need for more complicated, difficult receiving and timing systems. Sigma was brought on board because, in addition to supplying the fundamental concept for the necessary photon-counting electronics, the company could demonstrate its ability to develop the intricate hardware and software to support the mission.

“It’s the most complex single thing I’ve seen at Goddard in the electronics domain,” says Greg Henegar, product design lead for ICESat-2’s main electronics box, adding that Sigma’s solutions were “extremely cleverly devised. It required a very efficient architecture of that electronics board just because of the sheer volume of data it’s receiving.”

“The Air Force paid for us to develop our own timer concept, and we were able to take that and give it back to NASA in the form of MABEL and ATLAS,” says Machan. “That kind of completes the circle, if you will.”

Not that the story ends there. While the company’s SPL technology begins its break into the commercial market, Sigma also worked on a study with NASA regarding the feasibility of using a similar system to orbit and completely map three of Jupiter’s moons, concluding that Callisto and Ganymede could be covered in two months each, while the smaller Europa would take just a month, all with better than 5-meter horizontal and 10-centimeter vertical resolution.

“John’s claim has always been that a single photon is the most efficient use of energy,” Machan says. “To have a tiny laser and a really sensitive detector is a nice solution for NASA instruments.” 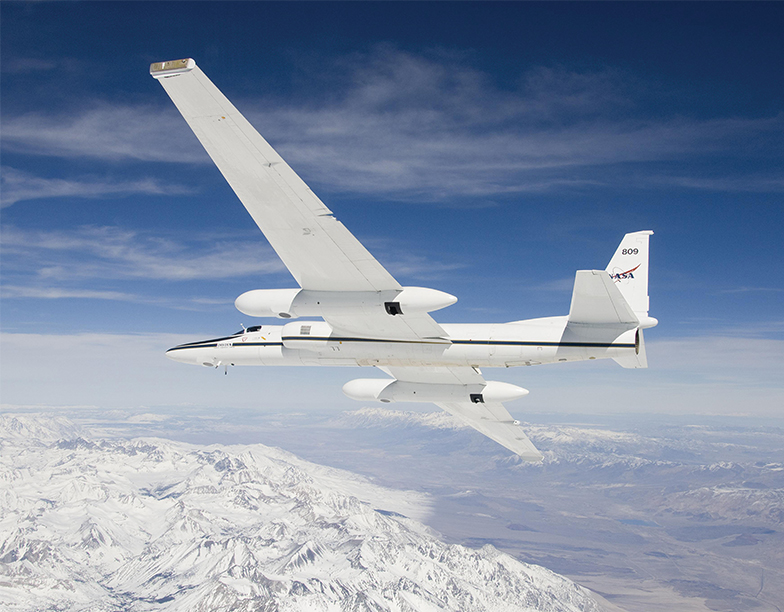 In 2010 Sigma provided components of Goddard’s airborne, photon-counting Multiple Altimeter Beam Experimental Lidar, which served as a test bed for the technology that will fly on the Agency’s Ice, Cloud, and Land Elevation Satellite 2. Sigma is contributing significantly to that vehicle’s instrumentation as well. 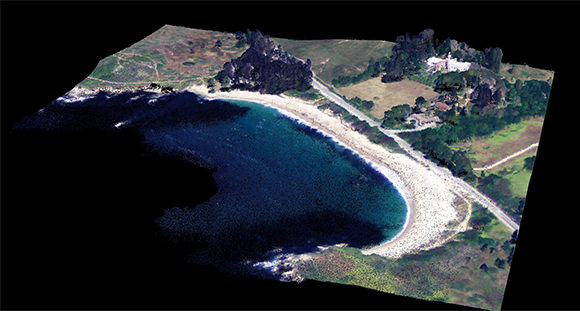 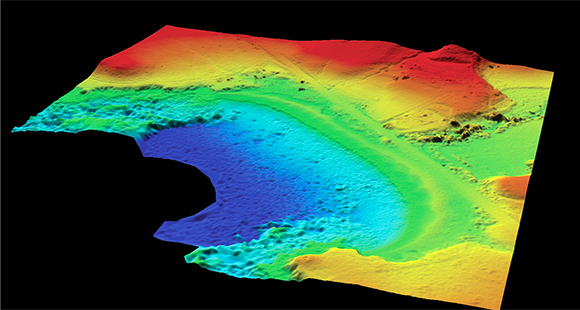 A digital elevation model extracted from the data reveals the topography and bathymetry—that is, underwater elevations—of the same area, down to a sea depth of 13 meters. 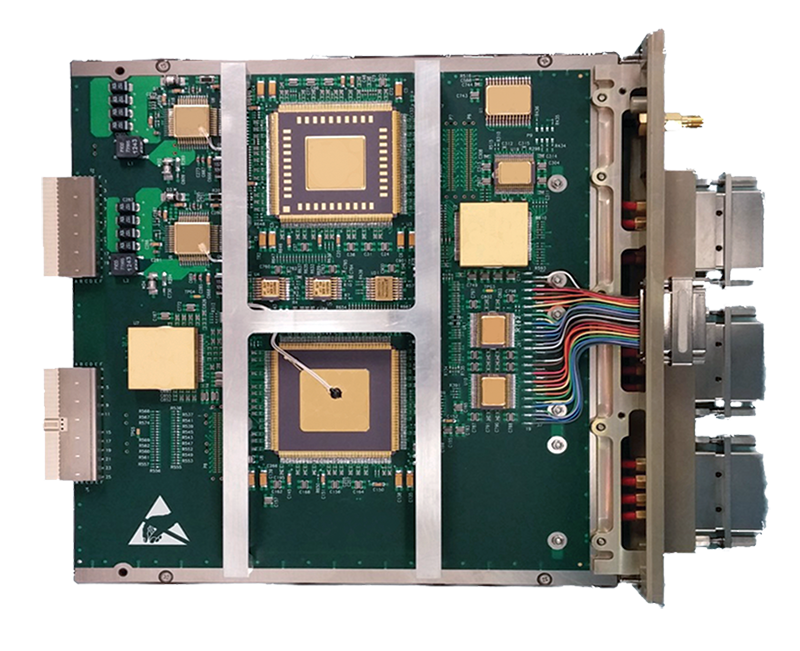 A Sigma imager captured this high-density lidar point cloud of a forested area in Sierra Nevada, California, in a single pass.