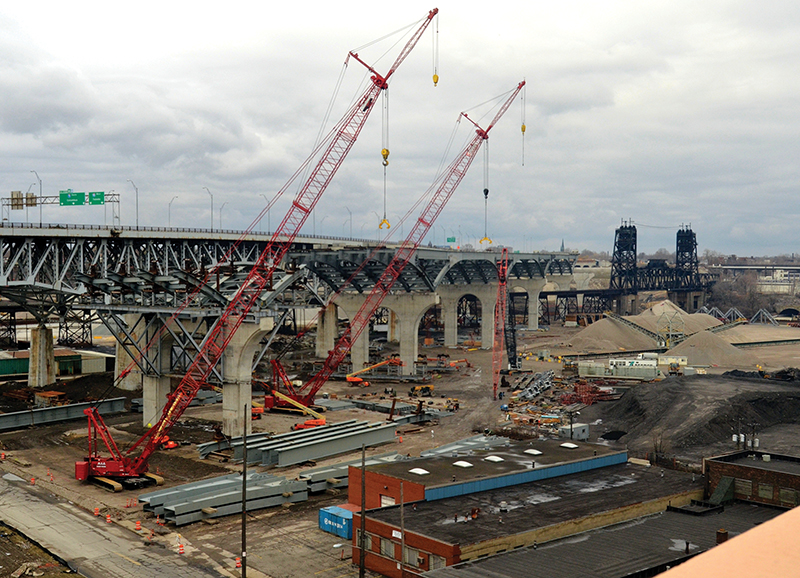 The Obama administration wanted to foster partnerships between the Government and small- to medium-sized manufacturers through its Strong Cities, Strong Communities Initiative, wherein Federal agencies around the country are asked to mentor local businesses. One of the communities selected was the Cleveland-Youngstown region of Ohio, resulting in a call to Glenn Research Center.

Glenn approached the city of Cleveland, Cuyahoga County, and the Manufacturing Advocacy & Growth Network (MAGNET) to brainstorm the best way to select worthy partners. Together, the Adopt a City program was launched, in which eight companies were identified to receive 40 hours each of assistance from experts and at Glenn. The companies also were eligible to receive low-interest loans through the program, now in its third session.

Given the variety of tasks and challenges faced by NASA scientists every day, the experts at Glenn were well-positioned to participate in the program, bringing both expertise from aeronautics and space missions and specialized equipment the companies couldn’t otherwise access easily.

An independent report released on the project by MAGNET found Glenn’s involvement with the Adopt a City program’s first 14 companies resulted in the creation of at least 19 jobs, the retention of an additional 47 jobs, $2.7 million in revenue generated, and an additional $33.9 million in private money invested in the projects. “That’s just the tip of the iceberg,” adds Paul Bartolotta, a senior technologist at Glenn, as some of these projects had not been completed at the time of the report’s publication at the end of 2014, and their economic impact is not yet fully realized.

The companies involved in the first round of Adopt a City varied greatly in their lines of work, from a company that produced vinyl records and another that turns garbage into energy (page 126), to one—Pile Dynamics Inc. (PDI)—that needed assistance making thermal sensors for concrete piles. Using an array of NASA experts to work on such a diverse set of challenges made sense, Bartolotta says. “We have the talent, we have the technologies, we have the facilities to solve their problems.”

PDI needed an important solution to a pressing problem: the company had developed a commercialized version of a prototype created by University of South Florida professor Gray Mullins but needed a way to protect the thermal wire sensors within its Thermal Integrity Profiler (TIP) from both water and the caustic environment of curing concrete. Time was of the essence, as the company had just been tapped to work on the new Innerbelt Bridge on Interstate 90 in Cleveland.

Concrete warms as it cures, and TIP monitors the temperature within a concrete pile, or shaft, to identify whether it was poured properly or if any defects have occurred. PDI instruments a rebar cage with the sensors before it is installed in the shaft and filled with concrete. The temperature is collected for the first day or two after the concrete is poured, which allows the integrity of the pile to be monitored before the end of the 28-day curing process.

The company was using an extrusion process for sealing the sensors, but PDI’s team of electrical engineers wanted to find something better. Needing to find a glue with the correct chemical properties that was available to do the job in a commercially feasible way, PDI applied and was accepted for the Adopt a City program’s first round.

Their initial conversation with Bartolotta was encouraging, says Dean Cotton, one of the electrical engineers at PDI. Bartolotta had extensive experience in civil engineering and understood well the process of pouring a concrete foundation. “We were able to get right to the problem, that we were making these sensors and they have to go deep underwater and then be encased in concrete,” he says. “We developed a plastic shell to mechanically protect our sensors, but needed a glue to put inside the shell to protect our circuit boards.”

On Bartolotta’s recommendation, PDI paired up with Sandi Miller, a chemical engineer at Glenn, who began reviewing her list of thousands of companies specializing in glues and epoxies. “Picking an epoxy out of the thousands of epoxies available was proving to be very difficult,” she says. In the end, a representative for an adhesive company already working with PDI found a substance that had potential. PDI then asked NASA to change the direction of the project and brought some samples of the glue to Miller’s lab for testing.

NASA’s new role was to validate the strength of the seal the glue made inside PDI’s shell and the strength of the bond between the shell and the wire used to transmit the temperature readings to an above-ground data collector. “We looked at the degree of cure of the epoxy, and we used optical microscopy and scanning electron microscopy to look at the cross-section between their epoxy and the wire,” Miller said. “We basically sectioned their sample along the wire and also within the encapsulated material to make sure we weren’t seeing any gaps between the wire and the epoxy.” She also ran some strength tests to see where a failure would occur and found the tensile strength of the bond was stronger than the wire itself.

She admits this was a different kind of project than she’s used to undertaking, but “any time you’re interacting with the greater community and you’re learning what the needs are outside of our little box that we tend to focus on, it expands your knowledge base. It was a neat learning experience.”

Equipped with their NASA-validated glue, PDI got to work monitoring the concrete piles for the project right in their backyard, the $26 million bridge. The sensors have since been used in at least 40 different projects around the globe and, according to the company, are quickly gaining acceptance as a better alternative to existing testing methods.

Monitoring the temperature of concrete as it cures can indicate whether the concrete pile was poured properly. If temperature readings indicate a cooler spot, it suggests some of the concrete is closer to the soil or another defect in the shaft. If the rebar cage comes in contact with the soil and groundwater, it could eventually rust and threaten the structural integrity of the concrete shaft, Cotton says.

Thermal Integrity Profiling was standardized by the American Society for Testing and Materials in 2014. “This showed us the civil engineering world accepted this test method,” Cotton says. “That was a big deal for us. It validates the method, and we have the equipment and sensors to commercially provide to the construction industry.” The sensors have also been embraced as a standard tool by the Ohio Department of Transportation for bridge foundation projects, and were awarded the 2015 American Society of Civil Engineers Charles Pankow Award for Innovation.

There’s a bit of personal satisfaction in the help NASA provided PDI, Cotton adds. “I grew up very close to NASA Glenn and still live close by. I drive by Glenn every day. It’s great to know NASA is here and sharing technology to help the Cleveland area.” 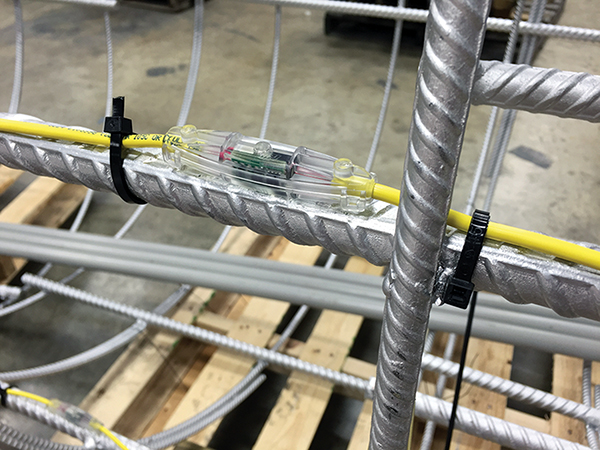 The thermal integrity profilers designed by Pile Dynamics Inc. are affixed to a rebar cage, which is then installed into a shaft and filled with cement. The profilers monitor the temperature of cement as it cures, which can alert engineers to any problems with the structural integrity of the cement before it dries. 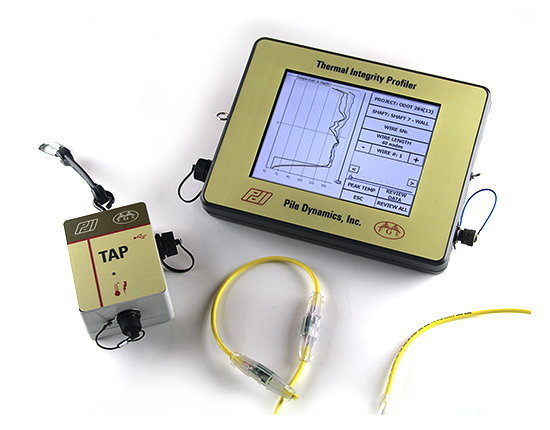 Pile Dynamics Inc.’s thermal integrity profilers track the temperature inside cement piles to ensure they were poured properly, thereby ensuring the structural integrity of the project. Data are collected for the 28-day curing period on the digital monitor, left above ground and later disconnected.

The Innerbelt Bridge in Cleveland has just been replaced, a $26 million undertaking. Contained within the cement piles that support the bridge are thermal integrity profilers built by Pile Dynamics Inc., a local company that used the profilers to ensure the structural integrity of the bridge by monitoring the temperature of the cement as it cured. Image courtesy of the Ohio Department of Transportation