Born out of a desire for aircraft to be able to take off and land capably at airports with shorter runways to alleviate congestion at the major hubs, the circulation control wing concept has been floated by the aeronautical community as a possible solution for decades. The technology calls for increased amounts of high-pressure air, derived from either the jet engines or separate compressors, to flow over the leading and trailing edges of the wings, creating greater lift. Given extra lift, an aircraft can take off and land at a lower speed, thus reducing the length of runway needed. Extra lift also enables increased weight-carrying capacity.

To test an idea that had yet to see flight time, in 2006 NASA’s Dryden Flight Research Center (now Armstrong Flight Research Center) put out a call through the Small Business Innovation Research (SBIR) program for the design and manufacture of an unmanned, sub-scale test aircraft outfitted with circulation control wings that could fly with or without the technology.

“The goal would be, you fly the baseline aircraft and see how long it takes to take off and land, and then compare it to the new technology,” says Armstrong aeronautical engineer Bruce Cogan. A host of other parameters would also be tested, including how the circulation control wing responded to aerodynamic stalling, whereby an aircraft simultaneously loses lift and altitude. “And since stalling cannot be modeled well in a wind tunnel or in a simulation, it’s one of those areas where you have to get flight test data, and because this is a risky maneuver, unmanned testing is always better.”

Area-I Inc., based out of Kennesaw, Georgia, garnered Phase I and II SBIR funding primarily for developing the aircraft’s design, and the company used grants from the state of Georgia, along with its own money, to build a prototype. Nick Alley, Area-I’s CEO, oversaw the circulation control wing project and finished constructing the aircraft in 2011.

In the intervening years, however, NASA had begun to focus on other aeronautical research, and two of the Agency’s centers were soliciting SBIR proposals for the development of different research aircraft: Armstrong was looking for an economical, sub-scale baseline model akin to a medium-range, narrow-body, twinjet airliner for aerodynamics investigations; Langley Research Center, through the Aviation Safety Program, needed a regional-type, sub-scale airplane with a T-tail empennage and a rear engine mount. T-tail aircraft can have more severe stall characteristics, so Langley researchers wanted to fly a small-scale facsimile into extreme conditions and experiment with recovery maneuvers. The data gathered from those tests would be used to develop a model for a pilot-training simulator.

Fortuitously, the aircraft Area-I had constructed to test the circulation control wing technology was highly adaptable. “The unforeseen genius of the aircraft was that we inadvertently designed a platform that was reconfigurable in the way we designed the molds and the tooling,” Alley says. “We could, for a minimal amount of effort relative to designing a whole new airplane from the ground up, reconfigure it and put a different type of wing on it or do a whole bunch of other things as needed.” Banking on its versatility, he named his baseline aircraft PTERA, or Prototype-Technology Evaluation Research Aircraft, and applied for and received Phase I SBIR funding from both Armstrong and Langley to develop the pair of what Alley calls his “flying laboratories” in 2011. He received Phase II funding from both centers to continue work the following year.

In 2014, Area-I completed construction of both aircraft, in addition to another model similar to Armstrong’s medium-range twinjet airplane that the company is keeping for commercial use. Armstrong’s model is 10 percent the size of its commercial counterpart, while Langley’s plane, which the center named PTERA GMA-TT, for Generic Modular Aircraft T-Tail, is about 16 percent of full-scale and represents the flight dynamics of a mid-sized regional jet transport.

With their respective aircraft at hand, both centers see a lot of potential. In addition to improving pilot performance during stall, a secondary goal for GMA-TT would be to test related alerting and automation technologies, says David Cox, who is element lead for sub-scale testing at Langley. “We’ve explored some advanced control laws that would automatically pull an aircraft out of these situations, so that’s another possible use.”

Armstrong’s interest in aerodynamics opens up numerous research possibilities using PTERA. Plans are in place to test wing tips made of shape-memory alloys, which can change their shape at certain temperatures to reduce drag or maximize control at various stages of the flight envelope. “We could test a number of other wing innovations as well, along with assorted sensors and promising algorithms,” says Cogan. “The baseline PTERA is designed for experimenting on a range of technologies, so it’s certainly capable.”

Building on its successful work with NASA, Area-I is developing other unmanned aerial vehicle airframes for the U.S. Navy and the U.S. Air Force and is also taking orders from universities and companies interested in using PTERA or other company-designed unmanned aircraft for testing aerospace technologies that may yet be too dangerous for piloted flights. “Maybe you need a dynamic environment where it makes the most sense to fly it on an airplane rather than use a wind tunnel, especially when you’re developing advanced control algorithms,” Alley notes.

Customers stand to benefit from the substantial work put into making the aircraft dependable. With Phase II funding from Armstrong, Area-I’s baseline PTERA aircraft was flown and tested over Georgia on three separate occasions in 2014. As well as allowing engineers to refine the controller architecture and various flight software that Alley had developed on his own prior to the NASA contracts, the flight time proved valuable for dealing with the much-dreaded “gremlins”—those unforeseen problems that invariably show up when a newly built aircraft is getting off the ground. Alley says, “We’ve had the opportunity to work out those kinks—to kill those gremlins.”

That means much of the challenging work has already been done. “Blood, sweat, and tears have gone into the design of this baseline aircraft, including the design of the system as a whole, from the ground control station to the onboard avionics to the airframe and its structures,” Alley remarks. “You’re already standing on the shoulders of a giant. It’s helping you be one step ahead so you don’t have to design the whole thing from scratch. PTERA is sitting there with an open source flight computer so that you can go in and load up everything you need. You can put your payloads in, we can build you new wings if you need to and other new things, and in a matter of a year you can be up and flying.”

Flight time also allowed the company to build a performance database of the baseline aircraft, documenting its maximum speed, takeoff distance, and altitude, among other variables. Users can compare the benchmark data to whatever innovation they’re working with and determine whether it’s having the intended impact. “You can look at all of our previous flight tests and discover, for example, if your fuel burn is less on this flight,” Alley says. “There’s data, there’s background, and there’s history with PTERA, which will be very valuable later as we’re evaluating new technologies.”

Cogan says having flight data available like this is rare. “We can’t release data owned by the Navy or Air Force because of ITAR [International Traffic in Arms Regulations], and companies have proprietary data that they don’t want to share,” he says. “But with PTERA, it’s basically all Government-owned, nonmilitary data, so it’s easy to distribute and publish.”

PTERA’s other benefit—one accounted for by all the blood, sweat, and tears that went into its testing and the development of modular construction techniques—is its cost. While comparable models sell for millions, if not tens of millions of dollars, a new PTERA can be purchased for about $250,000. “That’s a pretty good price,” says Langley’s Cox. “We spend a fair amount of time making sure we won’t lose it for the wrong reasons, but Nick [Alley] is down there with that price tag—it’s possible for a quarter of a million dollars to dig your way out of that problem should it happen. That wouldn’t be the case with a multi-million-dollar aircraft.”

For Alley, the experience his company has gained from working on these sub-scale aircraft is priceless. “It’s matured my young engineers. It’s given them experience that they would never get in typical industry, which has made us a much better company,” he says. “It keeps us young and flexible and keeps us doing the wild and crazy stuff as well, which makes this quite the dream job.” 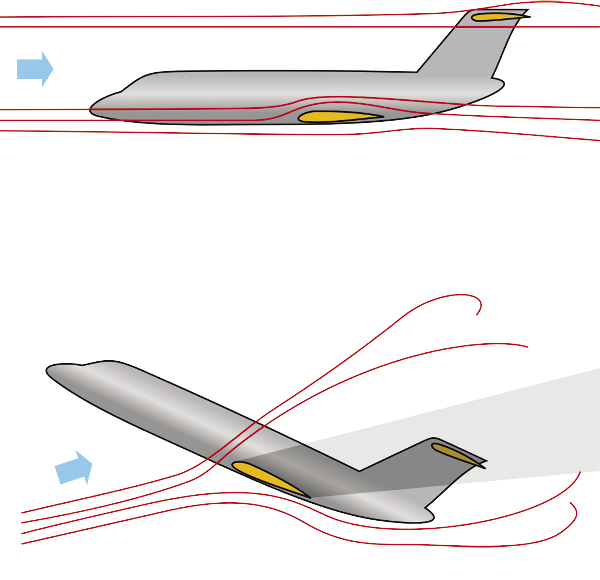 An aircraft with a T-tail empennage in normal flight (top) versus when it’s in a deep stall condition, whereby the wake created by the stalled wings blanket the T-tail, preventing normal recovery. One of NASA Langley Research Center’s goals for its PTERA Generic Modular Aircraft T-Tail, or GMA-TT, is to flight-test stalls and recovery maneuvers in order to improve simulators used for pilot training.

Developed with NASA SBIR funding, Area-I’s Prototype-Technology Evaluation Research Aircraft, or PTERA, was flown and tested in Georgia skies on three separate occasions in 2014. The aircraft, a 10-percent scale model of a medium-range twinjet airplane, can be used to test any number of aeronautical technologies, from advanced control algorithms to avant-garde wing designs.