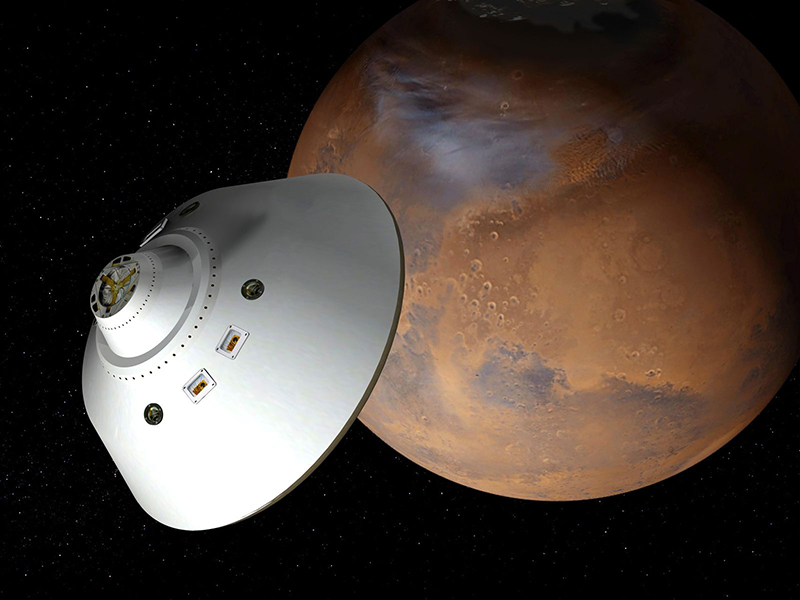 In June of 1991, Japanese scientist Sumio Iijima had been studying fullerenes, man-made molecules made up entirely of carbon, when he discovered under an electron microscope a novel configuration—a honeycomb-like structure of carbon atoms connected by covalent bonds and rolled into a tubular shape. Because of its extended, uniform bonds, the nano-sized material (each tube’s diameter measures a billionth of a meter) is the strongest ever discovered: ounce for ounce, it’s at least 117 times stronger than steel and 30 times stronger than Kevlar. It also proved to be elastic, able to bend and then snap back into position, and it had a high degree of electrical conductivity.

While carbon nanotubes (CNTs) have since caught the imagination of a wide swath of industry, so has another, similar material with distinct properties. In 1994 physicist Marvin Cohen, a professor at the University of California, Berkeley, theorized that boron and nitrogen, two elements with comparable atomic sizes to carbon, could be formed together into the same strong, tubular structure as CNTs. The next year, his colleague Alex Zettl successfully synthesized the first boron nitride nanotubes (BNNTs) using an electric arc method.

The synthesis of BNNTs piqued NASA’s interest because the molecules’ additional benefits make them potentially valuable for protecting astronauts during space exploration. For one, BNNTs can withstand temperatures up to 1,650 °F, while CNTs start to degrade at 750 °F. What’s more, BNNTs also absorb neutron and UV radiation, which are threats to spacecraft, electronics, and people traversing the solar system. For the Agency, acquiring a heat shield that has a layer of lightweight, powerful, heat-resistant, radiation-absorbing BNNT composite would be hugely advantageous.

But for all their promise, there was one major preliminary hurdle that had to be cleared: finding a way to synthesize BNNTs in sizable quantities.

“Researchers could make no more than a little fingertip of this stuff at a time,” says Mike Smith, a former staff scientist at NASA Langley Research Center.

In 2001, Smith led a team of Langley scientists in experimenting with different methods for synthesizing the ultra-tiny, elusive nanotubes in greater quantities. In total, NASA and the Department of Energy provided several million dollars of support for research and development. In partnership with researchers from the National Institute of Aerospace (NIA), a nonprofit research and education institution, the team carried out its work at nearby Jefferson Lab. The facility houses the world’s most powerful free electron laser, which played a role in producing CNTs in the early years of research.

At that point, finding a successful, reproducible method for creating any amount whatsoever of high-grade BNNT required another two years of experimenting. “We tried different laser frequencies, target materials, catalyst compositions, focuses and frequencies, and so on to find the optimum condition, with a thorough characterization of the product at each condition,” says Cheol Park, a scientist in the Advanced Materials and Processing Branch at Langley. “This was a long and challenging process.”

In 2008, the team tasted success when it produced the world’s first sizable, high-quality BNNT sample. In short, their resulting winning formula requires that boron and nitrogen be present in a particular ratio to each other inside a highly pressurized chamber. A powerful laser is then fired into the chamber, causing the two elements to heat up and form a vapor cloud that, as Smith puts it, “self-assembles into these puffy, long mats of nanotubes that kind of look like cotton balls.”

In the next few years, the team worked to fine-tune its formula, with special attention paid to increasing the rate of production. Eventually, they were able to synthesize 20 milligrams of BNNT per hour, and managed to do so using a standard welding industrial laser.

Having licensed NASA’s patents, BNNT LLC’s goal has been to continue improving the nanotube’s production efficiency. As a result, in May 2014, the company announced it had further developed the foundational technology to the point that 200 milligrams of BNNT could be synthesized per hour. That July, the product was made commercially available to researchers for the first time.

There has been a steady global demand for samples. Aside from NASA’s aspirations to use the material for protective composite materials in spacecraft, numerous other potential uses abound, such as protective gear for first responders, electrical insulation (in contrast to CNTs, which are solely electrical conductors), and even soft-tissue cancer therapy. “BNNTs have a lot of subtle qualities that lend themselves to a variety of applications,” Smith says, “and now that it’s commercially available, people are itching to see what they can do with it.”

Meanwhile, the Space Agency and BNNT LLC have maintained a close working relationship. Through a Space Act Agreement, in exchange for a steady supply of samples from the company, NASA Langley provides modeling and simulation analysis, as well as material characterization, on an ongoing basis. (A new BNNT synthesis rig—designed by NASA and NIA researchers and built at the NIA’s laboratory—is being used for those purposes.) “It’s about quality control,” says NASA’s Catharine Fay, who manages the BNNT program. “The goal is for us to help the company to continue optimizing the quality and quantity of the nanotubes.”

Another way they’re working together toward that goal is by experimenting with other methods for BNNT synthesis. For example, the BNNT team is exploring the use of Langley’s plasma spray as a heat source for the vaporization process. “The key is not using a laser, per se, but being able to heat the material very quickly,” Park explains. “Lasers may not be the final destination. We may be able to find a cheaper method.”

Decreasing the production cost would benefit both the private sector and NASA, which is dedicating considerable resources to structural composite development utilizing BNNTs. More than 20 researchers throughout the Agency, along with others at the NIA, are working on the technology, which could one day serve as either part of the heat shield or the entire hull of a spacecraft, protecting astronauts from temperature and radiation as they journey to Mars or some other celestial body.

In addition, BNNTs’ lightweight, stable composition makes them ideal for eventually replacing ceramic and metallic engine components and rocket nozzles in spacecraft and airplanes. “We think boron nitride nanotubes can improve the structural and thermal properties for a variety of parts that can be exposed in extreme environments,” Park says.

“There’s no telling what else BNNTs will be used for in the future because it has such unique properties,” Smith adds. “Now that we’re unlocking more efficient methods for synthesizing them, at least now we’ll be able to find out.”

Abstract
First synthesized in the mid-1990s, boron nitride nanotubes (BNNT) are strong, lightweight, and heat-resistant and absorb neutron and ultraviolet radiation_making them ideal spacecraft heat shields. But no method existed to create them in appreciable quantities until Langley Research Center accomplished the feat in 2008. Having licensed the NASA technology, Newport News, Virginia-based BNNT LLC is supplying the material to companies while working with the space agency to further improve the production process. 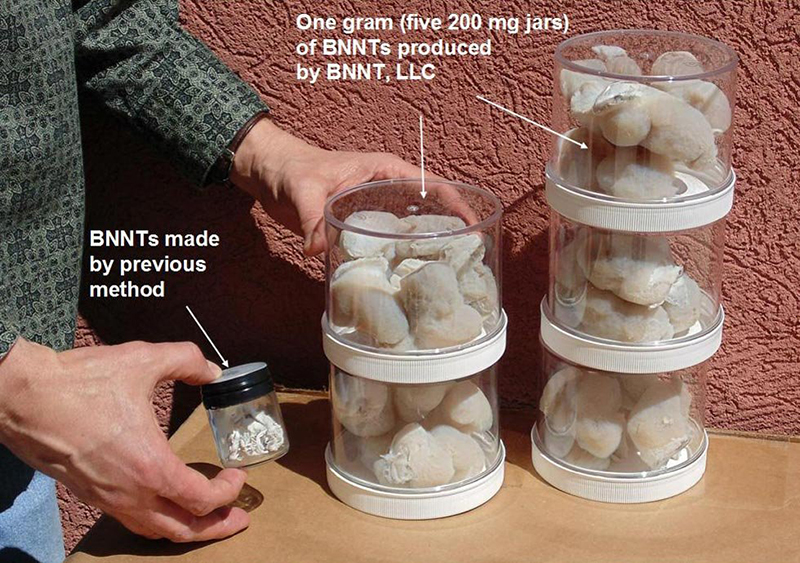 BNNT LLC has developed the technology to synthesize 200 milligrams of boron nitride nanotubes per hour. The company is making the material available to researchers who aim to take advantage of its molecular properties, such as its strength and heat resistance, for a variety of applications.

An artist’s concept of a Mars sample return mission. NASA scientists hope to utilize boron nitride nanotubes for various structural components of spacecraft. The material’s ability to absorb neutron and ultraviolet radiation makes it an optimal choice for space exploration, and its strength and heat resistance can provide stability againist the very hot temperatures associated with entering planetary atmospheres.