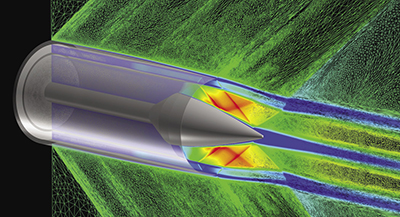 Multidisciplinary Software to Help Take Aircraft to the Next Level

Consider any component of a modern passenger airplane, and you’ll discover a remarkable amount of engineering complexity that went into its design. Turbofan engines rely on the harmonious combination of fans, compressors, combustors, turbines, shafts, and bearings. Airplane wing designs must consider two major but distinct disciplines: structural engineering, which analyzes the surface and interior makeup of the wing to minimize heft while avoiding structural failure, and aerodynamics, which studies how best to sculpt the wing’s shape to optimize lift.

For decades, engineers and scientists have taken apart and reengineered various aircraft components to find ways to maximize fuel efficiency, reduce noise, and improve safety. And for many years, NASA has played a leading role in supporting advances through both in-house research and close, long-term collaborations with industry. For example, the Agency has partnered with aerospace manufacturer Pratt & Whitney to maximize the spin efficiency of both the turbine and the fan in its jet engines (Spinoff 2015), and also with Boeing to advance a manufacturing process for lighter-weight, cost-efficient composite wings (Spinoff 1998).

Advances in aircraft parts have come a long way, but many improvements have come from optimizing a single component in isolation. Major improvements are becoming increasingly difficult to achieve through this approach, according to Justin Gray, a researcher at Glenn Research Center’s Propulsion Systems Analysis Branch. “It was pretty clear we’re reaching the limits of what can be done one part at a time. Things need to be engineered more holistically, which means researchers need to consider the system-level effects of their technologies.”

Making the next generation of aircraft more efficient requires a process called multidisciplinary analysis and optimization (MDAO). In MDAO, researchers from various engineering fields—structures, aerodynamics, propulsion, materials—work together to figure out how each component can best be coupled with the others to contribute to “an optimal design, which is not necessarily the sum of the optimal subsystems,” Gray points out. “Everybody has to compromise to get the best answer.”

But interdisciplinary cooperation of this sort is made difficult because combining all of these fields poses significant computational and mathematical challenges. Professor Joaquim Martins, who teaches aerospace engineering at the University of Michigan and works frequently on problems that utilize MDAO, says complexity is a given in this field. “You need at least 200 different variables to define just the shape of the wing, then you have the sizing of the skeleton, along with the internal structure, which brings in a few hundred more variables,” he says. “And everything is coupled. Everything affects everything.”

In order to facilitate such a complex design optimization process, in 2010 programmers from Glenn, with funding from NASA’s Fundamental Aeronautics Program’s Fixed Wing Project, began coding for a platform that would allow researchers to tightly couple their analyses without needing to be experts in MDAO. Later that year, the first iteration of OpenMDAO, a free and open source software framework, was made available to the public. The technology continues today under the new Transformational Tools and Technologies Program.

NASA is currently providing support for a number of ambitious projects that use OpenMDAO. One is a multi-university effort—supported by the Agency’s Leading Edge Aeronautics Research for NASA, or LEARN, Fund—to design a next-generation, truss-braced-wing aircraft. Such an aircraft, in theory, could burn 70 percent less fuel than a Boeing 737. While promising, Gray warns, “The risk is also high. If you don’t account for the detailed interactions between the aerodynamics, structures, and propulsion early on, it could all fall apart,” which is why OpenMDAO is playing a critical role in checking and building an integrated system model.

Martins, the principal investigator for the LEARN effort, will be taking advantage of the platform to optimize the aircraft’s aerostructural design as well as its speed and altitude throughout flight. Then, in another complex move, he and his colleagues will figure out the best combination of flight routes for a family of these planes in order to increase fuel efficiency and reduce greenhouse gas emissions across an entire fleet. “It’s very ambitious,” he says, “but we’re using OpenMDAO to tackle each of these problems. It’s really designed to help us make sense of complex, interconnected systems like this.”

Another project that’s taking advantage of OpenMDAO is Texas A&M University’s work with NASA to reduce the amount of noise created by slats: panels that deploy from the front of an airplane’s wings to provide extra lift. The challenge there is that it’s a tightly interconnected aerodynamics, structural, and materials problem, which is a “classic case” in the MDAO field, Gray says.

While the aeronautics industry stands to gain from the platform, so do others. The wind-energy community is actively using the technology to build multi-fidelity models of wind turbines that cost the least to operate per kilowatt of energy produced. And graduate students at the University of Michigan, working under Professor Jamie Cutler, used OpenMDAO not only to design a CubeSat (a miniaturized satellite) but also control it throughout its orbit. The CubeSat project used over 25,000 design variables. “OpenMDAO is unique because it’s being designed to couple high-fidelity modeling tools and handle distributed data transfer among them,” Gray says.

As industry and academia rely more and more on the platform for developing the technologies of tomorrow, NASA continues to work with partners to improve functionality through monthly software updates and a constantly expanding toolbox of plug-ins. The OpenMDAO Web site also hosts a forum where users can share ideas and trouble-shoot problems.

“OpenMDAO has got a lot of capability, but there’s a lot more to do still,” Gray says. “The goal is to have it help design real physical systems, so we’re working hard to make the program as robust and as applicable to as many industries as possible.” 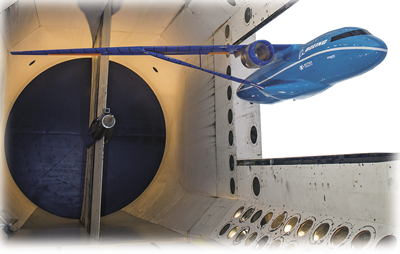 Engineers at Langley Research Center installed in its Transonic Dynamics Tunnel this semi-span, 15-percent-scale aircraft model equipped with a truss-based wing, taken from a Boeing design. Incorporating a truss—the diagonal piece attached to the belly of the fuselage and the underside of the wing—would make it possible to increase a wing’s aspect ratio, which would improve fuel efficiency by a greater margin than advanced conventional wings. Through the Leading Edge Aeronautics Research for NASA, or LEARN fund, universities are using OpenMDAO to optimize the aerostructural design of aircraft fitted with the technology.

An optimization to minimize sonic boom impact from a jet engine nozzle, with the color scale showing the flow field Mach number, indicates that much greater reductions could be found by coupling the computational flow dynamics-based shape optimization with an engine design code. Researchers will be using OpenMDAO, developed by programmers at Glenn Research Center, to perform the complex analysis.