The old saying about the inability to build a better mousetrap could also apply to aircraft design tools. For years, the best, and maybe only, way to dream up a realistic new aircraft design was to use computer-aided design (CAD) software, an expensive and regimented class of programs accessible only to professional engineers or engineering students. Hobbyists and others were mostly left out, and even those who had access to CAD tools were limited in their ability to be creative, as some parameters of fuselage, airfoil, and engine concepts were difficult to represent and couldn’t be modified without extensive re-work.

Silicon Valley programmer J.R. Gloudemans, professor at CalPoly San Luis Obispo Robert McDonald, conceptual aircraft designer Andrew Hahn, and Mark Moore, chief technologist for on-demand mobility, Hahn and Moore being at NASA’s Langley Research Center, have developed an open source program that allows anyone with a computer, from NASA to hobbyists to the aircraft industry, to try their hand at designing aircraft.

Previously, all design analysis capabilities relied on building analysis-specific geometries that were distillations from the fully defined master that had to be recreated and tweaked if any one input was modified. But the people being asked to create these meta-geometries weren’t specialists in this area, says Hahn. “Their job was to do computational fluid dynamics or structures. We wound up starting to do things like creating front-end interfaces for aircraft, but we quickly figured out we would need to have a different graphical interface for every single one of these things. That was just kicking the can down the road.”

Hahn and Moore wanted to create something between CAD and having to restart the modeling process every time a change to the geometry or analysis method was made; something that was “generic and had enough flexibility to where we could generate a whole bunch of different geometries for analysis, but not so complex that it was hard to use and you’d need a professional guy to do just that,” Hahn says.

Their solution, OpenVSP, or vehicle sketch pad, fits the bill.

“I like to think of VSP as sort of a 3D version of a napkin,” says McDonald, who worked with Hahn and Moore on the software and now leads the development. “When you’re in the early phase of the design process, you can very quickly and cheaply and easily build a 3D model that’s not only good enough to communicate your idea but good enough to do real engineering calculations with.”

A tutorial video shows how, by clicking a few boxes and moving a few sliders, rough shapes can morph into aircraft designs.

“You go in and very quickly build a 3D model that looks like the aircraft you have in mind, then go and run industrial-strength or research-strength calculations on it to figure out what’s the lift and drag on the idea,” McDonald says. And it’s not just limited to aerospace: OpenVSP is surprisingly flexible, and McDonald envisions uses for buildings, vehicles, rockets, maybe even NASA’s next crew vehicle.

Uses and designs are only limited by the degree of effort expended by the user, Hahn says.

CAD programs were intended to mimic the process of machining in order to create something new, but their ability to render any idea in 3D comes at the cost of convenience. “The more arbitrariness you build in, the harder it is to actually build or modify whatever model you’re creating,” he says.

OpenVSP, by contrast, allows changes to be made throughout an entire design when a single parameter is modified. The program works best with general concepts or designs, rather than trying to recreate specific vehicles. Someone wanting to make a socket set, or wine glasses, for example, can define basic parameters that describe those items and then modify them to create something that will serve the same purpose but have a different look, based on the specific dimensions input.

“You can describe, not perfectly but pretty well, using just three parameters, pretty much any wine glass you’ve ever seen. That’s how VSP works,” McDonald says.

“The key is to have just a few parameters that let you make huge changes to the shape in a meaningful way,” adds Moore. “Most people, if you show them a wing, they can recognize it as a wing. There are many different kinds of wings, but there are certain parameters that describe objects that all share that function. That’s what we’re doing. We’re allowing people to change those relatively small number of parameters and be able to generate pretty much any wing that’s out there.”

What makes OpenVSP different isn’t just its capability to change related geometries with a single modification but also the fact that it’s free to download and use for anyone with an interest in it. NASA developed the basic program more than a decade ago, and since it was released as open source software in January 2012, it has been downloaded an estimated 50,000 to 60,000 times.

“Well, it is free,” McDonald admits with a laugh.

He’s become the new lead on maintaining the program and its user community, in part to ensure OpenVSP will be available to users after Hahn and Moore leave NASA.

“It’s a wonderful situation from NASA’s perspective, because we still get the benefit of this program continuing to evolve to meet our needs without it having to be done through strictly internal dollars and development efforts,” Moore says.

For NASA, the benefit is obvious.

“I use it every single day and I simply would not be able to do my job without this tool,” Moore says. But it’s also “perfect for those garage innovators. Anyone can pick up this tool and, within an hour, put together a decent 3D aircraft model.”

Most aircraft companies use commercial CAD packages to design their products. Some of those aircraft companies, including Boeing and Gulfstream, who sought competitive advantage from their conceptual design capabilities, developed their own proprietary CAD-free geometry software. Now a growing number of companies, universities, and Government agencies are leveraging these advantages in their own design processes, but are doing so with OpenVSP rather than their own homegrown solution.

Colin Johnson, chief commercial officer of Desktop Aeronautics Inc., an aircraft design software company in Palo Alto, California, that sells a rapid aerodynamic simulation tool called GoCart, based on a program developed at NASA called Cart3D, sees that OpenVSP is helping to change how the industry designs aircraft. The early phases of designing aircraft used to be just numbers on a spreadsheet, with imaging software coming in to play later in the process.

“PhD students used to have to write their own crude modelers to do cutting-edge aerodynamic analysis,” Johnson says, resulting in a “gap between what you do on a spreadsheet and what you do before” going into CAD.

Along the way, bigger players in aircraft design realized they could harness the power of shape optimization through parametric CAD-free geometry modeling tools, but those are often difficult to use for anyone other than the original developer, he says.

“OpenVSP opens up the capability of rapid 3D modeling to the entire industry without having to overcome the barrier of needing to create the tool yourself, dedicate months to learning how to use it, or spend significant resources to commission the tool’s creation and maintenance,” Johnson says. Further, the open source nature of the program “allows the entire industry to benefit from each incremental improvement that developers contribute.”

He sees designers at places like Boeing who want to use GoCart going instead to OpenVSP because it’s easier to learn and free to download and get started. Previously, these designers could not conduct performance evaluations on early designs because creating the 3D model was too complicated. “CAD was too generic for how these designers think, was not well-suited for optimization, and was too expensive,” Johnson says. Boeing’s internal software “might define shapes in terms that are intuitive to the designer, but OpenVSP does this as well with greater accessibility and ease of use.”

Johnson says his company is a big fan of OpenVSP because it has “an enormous amount of capability. In some ways, you can think of OpenVSP as democratizing concept development across aerospace companies large and small. It’s gaining its own momentum.”

Abstract
For years, the only people with access to computer-aided drafting software were engineers. Hobbyist aviators were left out, until a group of engineers from Langley Research Center and California Polytechnic State University teamed up to create OpenVSP, an open source program for designing aircraft and other vehicles. Desktop Aeronautics Inc., of Palo Alto, California, is among several companies that use OpenVSP for new aircraft concepts. 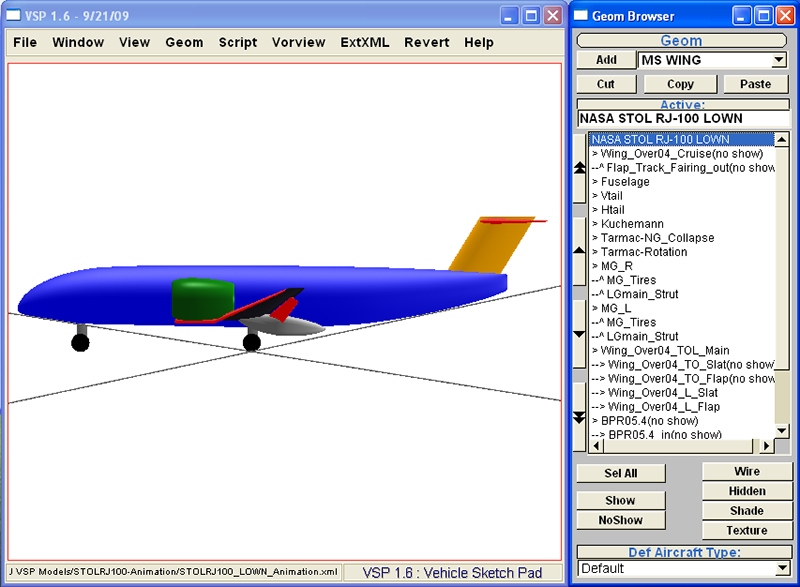 In addition to working through changes on existing aircraft designs, OpenVSP can be used on concept designs, like this NASA over-wing nacelle in landing configuration showing rotation tail-scrape and collapsed nose gear clearance angles.

OpenVSP, a design tool originated through a collaboration between NASA and CalPoly, can provide complete views of an aircraft design, like this isometric rendering of the Embraer ERJ190AR Regional Jet.