Neurosurgery is one of those things where you want the tools to be as precise and reliable as possible. One important tool of the trade, bipolar forceps, uses electricity to cut and cauterize tissue.

But electricity produces heat, and to avoid singeing healthy brain tissue, there needs to be a way to safely draw out that heat. One method to do that is a technology that owes a lot of its development to NASA funding and has proven useful to the Agency in a number of ways over the years.

The technology is called heat pipes, and they do one specific thing extremely well: they move heat.

Heat moves naturally. For example, hold a piece of metal while someone heats the other end, and before long your end will get hot. Just how fast that heat gets there depends on the type of material you’re holding.

In contrast, the electrical engineer says, “you can find heat pipes that have effective conductivity that is 20,000 W/mK or greater. They’re like a superhighway for heat.”

Heat pipes have been around for decades, and the modern-day versions still use essentially the same principle as the earlier models. You have a vessel—usually tubular, like a pipe—and inside, held in a vacuum, there is a wick structure and a small amount of liquid.

“Heat pipes work a lot like buildings with boilers and radiators,” Burke explains. The boiler heats up water and creates steam, which travels through the pipes until it gets to the radiator. The steam heats up the metal, which then loses some heat where it is in contact with the cooler air of the room, cooling the steam until it turns back into water. The water flows down the pipes back to the boiler, where the cycle repeats.

A heat pipe does basically the same thing: “It uses the hot vapor as a way to transmit heat quickly and efficiently,” Burke says. By playing with the details—the shape of the vessel, the wicking material, or the liquid inside—engineers can create a tool that works for a lot of different settings.

NASA has been interested in heat pipes since the early days of spaceflight, when it found that the stark temperature differences between the sun-facing and non-sun-facing sides of a nonrotating satellite could cause failures in the electronics within. An early version of a heat pipe helped carry heat to the colder side, evening out temperatures.

More recently, the Agency was working on a way to passively cool fuel cells, which produce electricity from reactants like oxygen or hydrogen. The process produces heat, and that heat needs to be removed, Burke says. There are different ways of doing that, but having worked with heat pipes before, and specifically with Lancaster, Pennsylvania-based Thermacore Inc., Burke was interested in exploring whether the company might have a good solution for the fuel cells.

Thermacore was founded in 1970. “Our founders were working with RCA developing technologies for the space industry when they came across the concept of a heat pipe and found some ways to improve upon it,” explains Thermacore medical market development manager Michael Bucci. They started a company to further develop and commercialize heat pipe technology.

Since then, Thermacore has received more than 40 Small Business Innovation Research (SBIR) contracts from NASA, starting with a 1983 project to explore the use of heat pipes in thrust chambers. More than 30 years later, the collaboration on heat pipe research is still going strong.

For fuel cells, which stack together like a deck of cards, NASA needed something that could fit between the layers. Burke went to the company to ask if they build a flat heat pipe that would absorb heat and send it to the edges.

Thermacore was able to build a very strong, lightweight heat pipe out of titanium that was just one millimeter thick. The result, called ultra-thin vapor chambers, won a 2014 R&D 100 Award as one of the 100 most technologically significant products introduced in the marketplace that year (Spinoff 2015).

And although NASA has shifted its plans for fuel cells and isn’t using the heat pipes right now, Burke says he has no doubt the innovative design will come in handy in the future.

“There are lots of applications where heat needs to get removed from very tight spaces,” notes Burke. “NASA finds this a lot because we’re always trying to cram 10 pounds of heat-producing electronics in 5-pound boxes.”

But fuel cells aren’t the only tight spaces where Thermacore has used heat pipes. One spot where the technology has proven very beneficial is the human brain, where surgeons need to disturb as little tissue as possible.

Bipolar forceps are two-pronged tools that use electricity to cauterize or ablate tissue between the tips. The problem was that the electricity also generates heat in the forceps, which can damage surrounding tissue—with tissue sometimes even sticking to the heated forceps, explains Bucci.

“Mini heat pipes help regulate temperatures at the tips so surgeons can control exactly where the cauterization is taking place. The result was a dramatic improvement in surgical precision, reduced procedure times, and better patient outcomes,” he says.

The heat pipes for bipolar forceps needed to be extremely small, much like the hyper-thin heat pipes for the NASA fuel cell project, which came later. Bucci says the final product is just 2.2 millimeters in diameter.

“As a heat pipe gets smaller, the amount of heat it can transfer decreases,” he notes. “So to design one small enough to fit into the bipolar forceps and still operate with and against gravity, our engineers needed to optimize the wick structure and fluid charge.”

But brain surgery is not the only medical application for Thermacore’s products. One of the earliest medical uses, in the mid-1990’s, Bucci says, was in X-ray machines, where heat pipes were used to draw out the heat created by the electron tubes that generate X-ray beams. In the years since, the company’s heat pipes have been used in a range of medical contexts.

“They’re used in robotic surgery systems as well as in lasers, PET-CT scanners, PCR thermal cyclers for DNA analysis, blood analyzers, devices used to ablate cancerous lesions, and many other applications.” he says.

Another important application is in blood warmers. “Healthcare providers often need to rapidly warm blood that has been in cold storage. Our flat vapor chamber heat pipes can help spread heat more evenly across the cool blood to increase the warming rate without creating hotspots that can damage blood cells.”

Bucci says he expects the medical industry to continue to find more applications for heat pipes as the technology continues to evolve and more designers become aware of the benefits it offers.

“This is one of many examples where a technology that NASA has contributed to finds other uses that are not so obvious,” says Burke. “The technology almost has to exist before someone in a medical field says, oh, we might be able to use a heat pipe here.”

“NASA investigated these because it had a problem first and looked for a solution. But oftentimes, once the solution exists, it ends up looking for a problem. And that’s where spinoffs come about.” 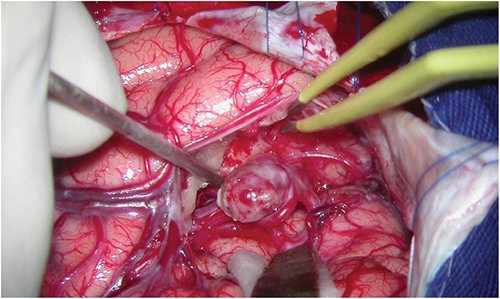 A surgeon uses bipolar forceps (yellow) in an operation to repair an aneurysm. Thermacore has designed a miniature heat pipe to help dissipate extra heat generated by the electricity in the forceps, which has improved surgical precision, reduced procedure times, and improved patient outcomes.

Heat pipes help dissipate heat or move it where it’s needed. Thermacore makes them in a variety of sizes and configurations for different applications, but they all work based on the same basic design.