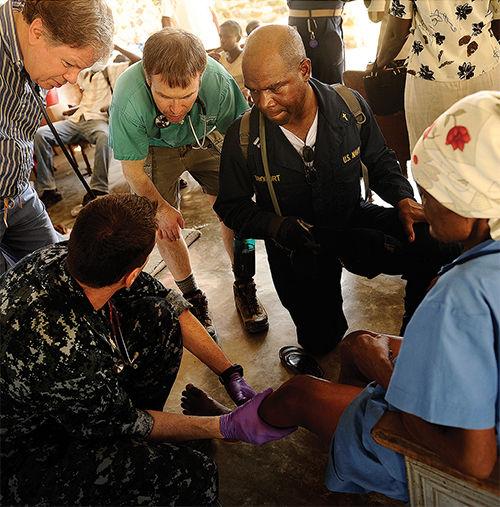 NASA astronauts are screened for sound health, among a slew of other requirements, but no one is invulnerable, especially in space. For reasons not fully understood, space travel appears to suppress the human immune system, while some bacteria become heartier and more virulent in microgravity. Meanwhile, aboard the International Space Station, the nearest medical doctor is on the other side of atmospheric reentry. On a future mission to Mars, any emergency return would likely take months.

As part of NASA’s Exploration Medical Capability Element, it’s Ames Research Center engineer Tianna Shaw’s job to minimize the chance of such an emergency ever arising. Among the tools she and other NASA researchers want to use to that end are rapid diagnostic tests capable of detecting health problems accurately and early on.

“We don’t currently have lab technologies we use terrestrially that are of a size that would be acceptable for use in space, at least not on an exploration mission,” Shaw says. Blood work, for example, normally involves a few samples being taken and sent to different locations where they’re analyzed using the kind of heavy, bulky tabletop equipment that would cost a fortune to launch into space. What Shaw and her colleagues want instead would more resemble apregnancy test, with a single sample analyzed by one small device that produces results within minutes.

In 2011, Ames awarded two Small Business Innovation Research (SBIR) contracts to Intelligent Optical Systems (IOS) to deliver just that. The company proposed integrating a sensor platform with a smartphone, taking advantage of the existing technology’s high-resolution camera, processing power, and compactness. For the sensor, IOS envisioned using what’s known as a lateral flow test strip, the same detection technique used in a pregnancy test. The strips would analyze bodily fluids by combining them with molecules that glow in ultraviolet light and also bind with certain biomarkers—substances that indicate a biological condition, such as antibodies that signal the presence of specific illnesses.

IOS specializes in this sort of diagnostic testing, among other products, but to build the smartphone interface, the company turned to Los Angeles-based Holomic LLC, now Cellmic, which was already marketing smartphone-based diagnostic hardware.

“Our instruments already had a reputation for being highly accurate, so that was the motivation,” Cellmic cofounder and CEO Neven Karlovac says of IOS’s decision to subcontract his company. “Basically, IOS’s task was to develop the tests themselves, and our task was to develop a smartphone-based electronic reader to accurately read those tests.”

Cellmic already had a similar reader for analyzing test results in the visual spectrum. To meet NASA’s needs, the company developed a version that illuminated the test strips with ultraviolet light and could use the phone’s microprocessor to evaluate the resulting images and determine whether or not a given biomarker was present.

Because the tests use particles that become fluorescent in ultraviolet light, the results are easier for the system to spot, making the tests more sensitive than traditional, chromatographic lateral flow strip assays. “I guess you could look at it as an amplification method,” Karlovac says, noting that a lower number of particles can be detected if they’re emitting light rather than just reflecting it.

The NASA funding, through the IOS subcontract, let the company develop the concept, lighting, electronics, and software to make the device possible, he says. “It was instrumental in enabling us to do the research and development work.”

The two companies also worked together to ensure the tests and reader were compatible, and they ultimately delivered the capability to rapidly detect one cardiac and three liver biomarkers. “There was a considerable amount of effort and collaboration in developing the tests and reader in parallel,” Karlovac says.

The device Cellmic commercialized after the work was done, though, is designed to be compatible with a wide variety of tests. Rather than selling complete test kits to end users, the company markets its HRDR-300 Fluorescent Immunoassay Reader, available as a smartphone attachment or in a benchtop version, to companies that want to develop their own tests. The devices’ software is designed to be flexible and can be programmed according to the test developer’s needs.

The reader was officially released at the American Association of Clinical Chemistry meeting in July 2014. “We’ve delivered to a number of customers, and they’re using the product in their own development of these tests, or they’re validating their tests in clinical trials,” Karlovac says, adding that he hopes the technology will go into clinical use shortly.

Handheld, rapid diagnostic tests present several advantages: “speed and low cost and the fact that the results are available onsite while the patient is there and that the tests are relatively easy to administer,” Karlovac says. “And because it’s a networked device that gets digital results and is portable, it’s good for remote applications.” The same qualities that make the technology essential for deep space exploration also make it useful in far-flung corners of Earth.

The communications capability enabled by the devices’ smartphone platform also gives them another advantage. Test results, along with the locations where they are obtained, can be transmitted to a central database. In the event of a disease outbreak, Karlovac says, crews of health authorities using the readers would end up mapping cases of the illness. “You can see where there are more positive cases and how they move around so you can monitor the spread of the disease.”

Next, he says, Cellmic plans to devise a reader that can automatically adjust to analyze test results in both the visible and ultraviolet ranges. And NASA again plans to help fund the technology’s development.

Different light filters are required for tests that use different parts of the spectrum, and NASA would like the filters to change automatically, depending on the test. “We want to use this in space, and we don’t want to have to manually change the filters. They’re very small,” Shaw says. She thinks the additional versatility will benefit Cellmic’s earthbound products, too. “What they’ll gain here is something they wouldn’t necessarily do terrestrially, but I expect that it will eventually be incorporated into their commercial systems,” she says.

She doubts that NASA’s work with the company, which is also pioneering other rapid, mobile diagnostic tests, will end there. “One nice thing about the other tests Cellmic has is that by the time I need them for my exploration system, I believe they’ll have those capabilities to choose from.”

Abstract
Ames Research Center wanted a simple, lightweight device to diagnose astronauts_ illnesses within minutes. Los Angeles-based Holomic, now Cellmic LLC, was hired as a subcontractor to develop a device that used a smartphone to read results from a lateral flow test strip_the same technology as a home pregnancy test_with ultraviolet light. The company had made similar devices using visible light. Cellmic markets its resulting HRDR-300 Fluorescent Immunoassay Reader to companies that develop their own tests. 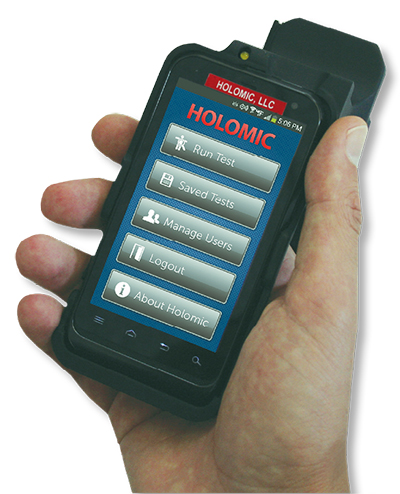 As a NASA subcontractor, Cellmic LLC (formerly Holomic LLC) developed a sensor platform that uses a smartphone’s camera and processing power to read the results of custom-made rapid diagnostic tests of bodily fluids.

Cellmic’s smartphone-based test reader presents several advantages for medical field work in remote locations, such as portability, ease of use, speed of test results, and the ability to transmit diagnoses and geographical locations to a central database, for example to map the spread of an outbreak. Image courtesy of the U.S. Navy