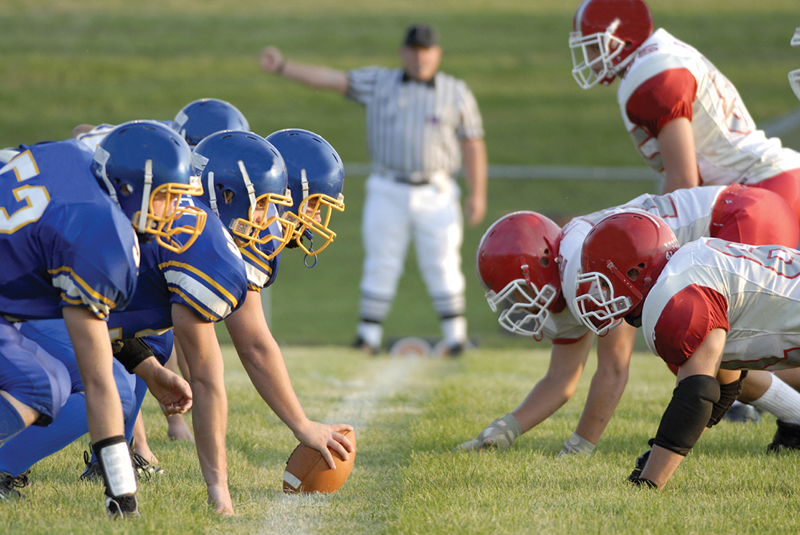 When Bill Elkins started working on liquid cooling garments to keep early astronauts cool, no one saw a use for them beyond maintaining thermal comfort. In the decades since, however, Elkins and other engineers have applied these wearable devices to a surprising number of industries and medical problems. Now, almost 60 years after his first encounter with the technology, he’s still spinning off his expertise in using liquid to regulate body temperatures.

The first liquid cooling garments were developed by the British Royal Air Force for pilots sweltering in hot cockpits. Worn under the uniform, they consisted of tubes threaded through long underwear with water pumped through them and cooled by a heat exchanger. The U.S. Air Force, which managed the planning for the Mercury missions until NASA was formed, soon began modifying the design for spacesuits. Elkins, a former fighter pilot with a degree in industrial design, joined the effort at the start and worked on the garments as a contractor to both NASA and the military.

In 1962 Litton Industries hired Elkins to develop rigid spacesuits, work that he continued as chief engineer at the AiResearch division of Garrett Corporation. At Aerotherm Corporation in the 1970s, he worked with several engineers at NASA’s Ames Research Center to develop an astronaut liquid cooling garment that used cooling panels, rather than vinyl tubing, a concept he would build on in later work for the Defense Advanced Research Projects Agency and a number of his own companies.

He and engineers at Ames designed a system of thin panels holding liquid-filled channels, each covering a muscle mass and connected by minimal tubing. They also introduced a cooling system for the helmet.

The system was never used in space, but these elements would appear in Elkins’ later commercial creations.

In the late 1970s, NASA contracted Acurex Corporation, where Elkins was then working, to design a liquid-cooled helmet liner and vest for helicopter pilots and then partnered with the company and the U.S. Bureau of Mines to create a body-cooling system for mine rescue workers.

Elkins founded Life Support Systems Inc. in 1980 and developed a number of cooling systems for military, recreational, and industrial applications. He began adapting his device for medical uses when Ames connected him with a parent whose child was born without sweat glands, a condition known as hypohidrotic ectodermal dysplasia.

Elkins created a cool suit to help the child and others like him, and the attention it received prompted others to bring him ideas for additional medical uses. As a result, his company ended up again working with Ames engineers, including Bill Williams, Bruce Webbon, Vic Vykukal, Bernadette Luna, and others who had made important contributions to liquid cooling garment technology. The team developed a treatment for multiple sclerosis, which doctors had been treating with cool baths since the late 1950s. The disorder results from damage to the protective sheathing, known as myelin, around nerves in the brain and spinal cord, causing nerve impulses to “short circuit.” Doctors found that lower temperatures allow signals to transmit more reliably along damaged nerves.

The Mark VII MicroClimate Medical Personal Cooling System (Spinoff 1993) Ames and Elkins created focused on cooling the brain with a liquid-cooled cap and vest, as opposed to cool baths, which were uncomfortable and could have unwanted side effects. The devices also came to be used to treat symptoms of peripheral neuropathy, epidermolysis bullosa, spina bifida, and cerebral palsy.

The military has also used Life Support Systems’ cooling technology, for example to keep armored bomb squad personnel cool in scorching temperatures during operations Desert Storm and Desert Shield, an application that won Elkins a Commander’s Award for Public Service from the Army.

Elkins was one of several engineers from industry and Ames, as well as Johnson Space Center and Langley Research Center, inducted into the Space Foundation’s Space Technology Hall of Fame in 1993 for their work on liquid cooling garments.

In the early 1990s, Elkins founded CoolSystems Inc. to adapt the technology to sports therapy (Spinoff 2004) with a device that applied pressure and cold to injured areas. The company got off to a rough start, and Elkins sold it to investors after a couple of years, but it went on to become hugely successful and now, doing business as Game Ready, also markets similar devices for use on injured dogs and horses.

In the mid-1990s Elkins founded WElkins LLC, now based in Downers Grove, Illinois, and worked with Oceaneering International on next-generation spacesuit and restraint systems.

For all that, he says his work “really began” in 2001 when Dr. Huan Wang, a neurosurgeon at OSF Saint Francis Medical Center in Illinois, was looking for a way to cool the brains of stroke and head trauma patients and came across a drawing Elkins had created for NASA, of a head-cooling device. “NASA put him in touch with me, and we’ve been fused at the hip ever since,” he says.

The pair collaborated on a pilot study published in 2004. Based on the potential it showed, True North Equities bought 60 percent of WElkins to continue spinning off liquid cooling systems for new applications.

Strokes and heart attacks decrease the amount of oxygen in the brain. By lowering the brain’s temperature, a doctor or first responder slows its oxygen metabolism, decreasing the need for oxygen to prevent cell damage. Traumatic brain injury, meanwhile, can also reduce oxygen delivered to areas of the brain, and cooling in this case also prevents damage by reducing inflammation.

Reducing the brain’s oxygen metabolism also helps prevent damage during open-heart surgeries, when blood flow is decreased. “It basically puts the nerve cells into a little bit of a hibernation, so they require less oxygen during surgery,” Elkins says, noting that this was an unexpected use that Wang brought to his attention.

Today hospitals and emergency medical technician teams are some of the company’s biggest customers.

WElkins’ Cooling Headliner, which the Food and Drug Administration approved for medical uses in 2012, applies pneumatic pressure to increase heat transfer, and it extends over the carotid arteries in the neck to cool blood on its way to the brain, effectively cooling from the inside and outside. Elkins says it can reduce brain temperature by around 4 °F in about 15 minutes.

Elkins and his partners have found that WElkins’ head liner is also effective in treating migraines and epilepsy. This is because cooling slows the speed of neural impulses: “It’s like turning the treble off on your hi-fi,” he says.

The company also markets a Sideline Cooling System to athletes and sports teams, saying cooling combats heat stress and improves performance by maximizing oxygen uptake, lowering heart rate, decreasing sweating, and increasing blood flow to the working muscles. Then there’s the matter of reducing inflammation in the event of a sports concussion. Wang maintains that higher brain temperatures resulting from exertion can increase the brain’s susceptibility to damage from minor blows. “If you use cooling on the sidelines, you reduce the effects of minor, sub-concussive impacts,” Elkins explains.

As sports concussions receive more and more attention, he says, he expects use of the Sideline Cooling System to increase.

The company has also developed a NO SWEAT! Work Enhancement System—a cooling cap and vest aimed at workers who have to wear heavy protective clothing or armor, work in hot environments, or both. These include military, firefighting, hazardous material cleanup, power plant, mining, and other applications.

Like the head liners, the cap and vest employ a system of panels similar to what Elkins designed with NASA.

WElkins did not begin marketing aggressively until summer of 2016, following clinical and athletic research partnerships with a number of colleges and universities. The company, which currently has 8 to 10 employees, anticipated roughly $1 million in sales in 2016 in the medical and athletic markets and “exponential growth thereafter,” says WElkins President Christopher Blodgett, who notes that the company also provides engineering and product development for the Department of Defense and private companies, which it expected to generate about $500,000 in 2016 and $1.25 million the following year.

Asked what has kept him relentlessly spinning off liquid cooling garments for ever more applications over the decades, Elkins says, “I like to contribute to humanity, and I like to stay busy. If I can help humanity, that’s what I want to do.”

Abstract
In the 1960s and _70s, Bill Elkins worked with engineers at NASA and the Air Force, including several at Ames Research Center, on liquid cooling garments to be worn under spacesuits and flight suits. He has spun that experience off into several companies, including Downers Grove, Illinois-based WElkins LLC. The company markets varieties of the cooling technology to prevent brain damage after heart attacks or strokes, improve sports performance, treat concussions, and keep workers from overheating under heavy protective gear. 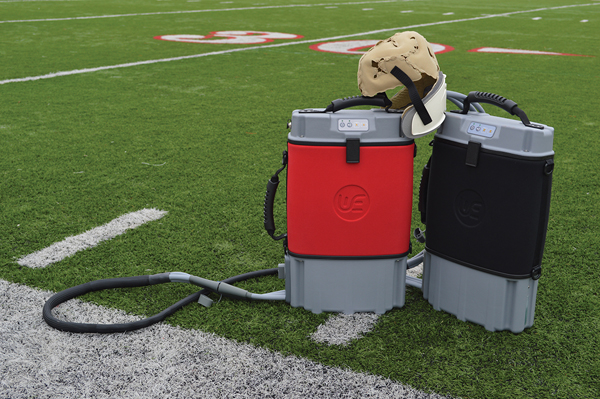 WElkins LLC’s Sideline Cooling System is marketed to athletes and sports teams as a way to improve performance, reduce inflammation in the event of a concussion, and reduce the effects of minor head impacts. 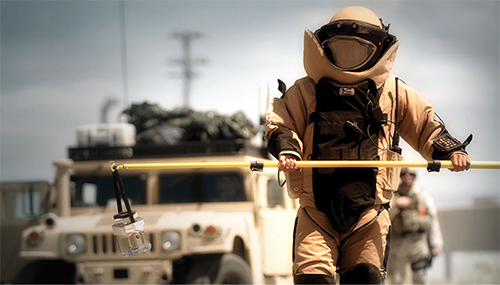 One application for WElkins LLC’s NO SWEAT! Work Enhancement System is to cool workers who have to wear heavy protective clothing, such as bomb squad personnel. In fact, one of his earlier companies’ products earned Elkins a Commander’s Award for Public Service from the Army for its usefulness in cooling these military personnel during operations Desert Shield and Desert Storm. 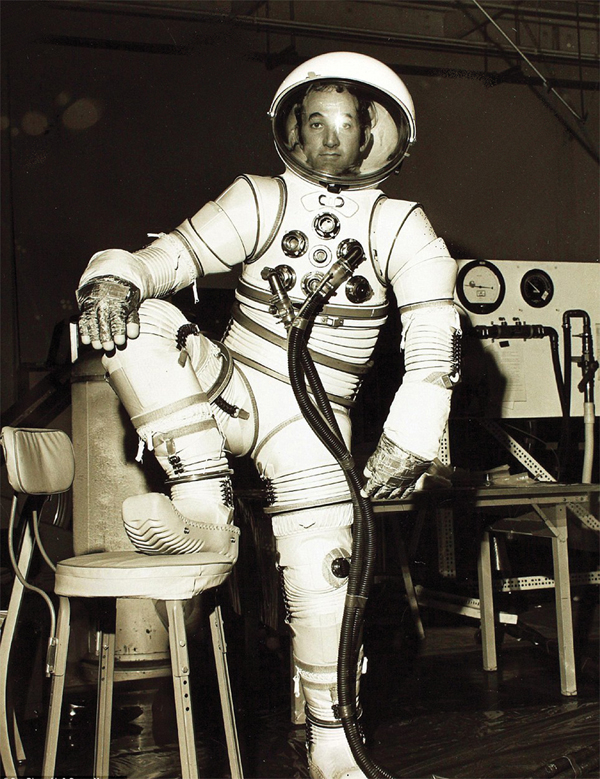 Bill Elkins poses in the Advanced Extravehicular Suit he designed for NASA in the 1960s as a contractor working for Garrett AiResearch. Elkins’ work on liquid cooling garments to be worn under NASA spacesuits and Air Force flight suits led him to commercialize a number of liquid cooling technologies. Image courtesy of the San Diego Air and Space Museum

Technology pioneered to keep astronauts and pilots cool now finds a commercial market in sports, where a liquid-cooled headliner can reduce inflammation in the event of a concussion and also improve performance by maximizing oxygen uptake, lowering heart rate, decreasing sweating, and increasing blood flow.