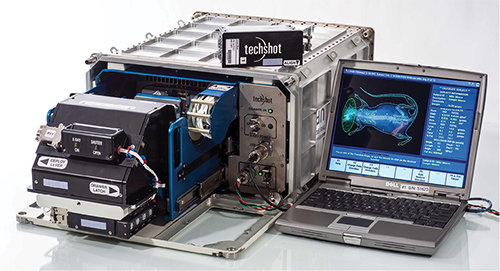 What happens to bones after months in microgravity? The answers are of keen interest to researchers, who can use the information to offer new insights into healthcare on the ground.

But since research space is at a premium on the International Space Station (ISS), cutting-edge equipment is needed that can help ground-based researchers connect with the orbiting lab. When it came to studying bone density, NASA wanted a scanner that wouldn’t expose the astronauts using it to harmful radiation.

Part of the challenge was that much of the research hardware on the ISS, which orbits some 250 miles above the Earth’s surface, was loaded years or even decades ago, and its equipment is growing out of date. “That was a little tough to swallow, but it’s true,” says Mike Read, manager of the ISS’s United States National Laboratory Office at Johnson Space Center. He’d been a part of the team in the payloads office in 1996, shortly before on-orbit assembly of the station began, and returned there in 2012, around the time it was becoming apparent that the lab facilities needed an upgrade.

“What we’ve been doing is to upgrade our capabilities to mimic what’s in a terrestrial lab,” Read says.

For NASA’s would-be commercial partners, it is important that any research equipment added to the ISS be similar to tools used on the ground, to allow for comparable test results and to justify the extra expense of sending trials to space. As a part of its upgrade effort, the Agency turned to the Center for Advancement of Science in Space (CASIS) to help get newer equipment ready for space.

Since 2011, CASIS has been responsible for lining up commercial clients for the ISS as the manager of the National Laboratory—the part of the ISS’s research facilities owned by the United States. CASIS selects projects based on commercial proposals and provides funding from a $3 million budget. The organization also connects clients with additional investors.

For equipment that researchers could use to study bone health in microgravity, particularly by scanning the bodies of small animals such as mice, CASIS got in touch with Greenville, Indiana-based Techshot.

“Techshot has more than 25 years of experience with NASA,” says Mike Roberts, a senior research scientist at CASIS. “Since 2011, they have been working with us to design new tools and facilities for space research and to support the development of life-science payloads for ISS National Lab customers.”

Techshot, awarded a Small Business Innovation Research contract, determined that an existing method for measuring bone density—known as dual-energy X-ray absorptiometry (DXA)—was a good starting point. With funding from NASA and CASIS, the company began an 18-month sprint to build and qualify a DXA device for use on the ISS.

Techshot started with a device widely used by biomedical researchers to take X-rays of rodents, called the GE Lunar PIXImus X-ray densitometer. In order to fit into the hardware racks, also called lockers, aboard the ISS, the company had to modify the device to make it smaller and lighter. However, Techshot was able to keep the same software, operating system, and display, allowing ground-based scientists to make apples-to-apples comparisons between ISS scans with those taken on Earth.

Wary of a radiation-emitting device in close proximity to the ISS crewmembers, the company equipped the densitometer with extra lead shielding and included a switch to ensure the device does not function unless secured into its assigned locker on the station. Even if something went awry, says Rich Boling, Techshot’s vice president for corporate advancement, the astronauts aren’t in much danger from the device’s radiation: “Crewmembers get more of a dose of radiation from eating two bananas than the X-rays being emitted from our machine. Before I learned that, I didn’t even know bananas had radiation in them.”

With a bone-scanning device operational on the ISS as of April 2015, researchers for the first time have the ability to observe changes in test animal musculature and bone density in space in real time, a boon for biologists and pharmaceutical companies interested in developing treatments for musculoskeletal ailments.

Techshot and CASIS quickly secured Novartis as the first client to use the densitometer. (As part of its contract with NASA and CASIS, Techshot is responsible for maintaining the device and helping bring in commercial clients, while the ISS crew conducts the investigations.) Novartis, the pharmaceutical giant based in Cambridge, Massachusetts, wanted to explore muscle atrophy using genetically modified rodents, in which the Muscle RING Finger-1 gene, associated with muscle protein degradation, was “silenced.”

Sam Cadena, investigator for the Muscle Group at Novartis, says his company leapt at the opportunity to conduct research on the ISS, as it provides a “unique model” for degeneration. “The only other model that can replicate this on Earth is aging. Thus the microgravity environment of the ISS provides a model for aging in only a fraction of the time,” he says.

Novartis scheduled two investigations, each involving two groups of more than a dozen mice—one group on the ground in a new facility at Kennedy Space Center and the other on the ISS. Half the mice in each location contained modified genes, while the other half were unmodified, allowing researchers from Novartis to compare differences in musculature after 45 days. (A second investigation, originally scheduled for fall 2015, was delayed after the loss of the SpaceX Falcon 9 earlier that year.)

To conduct the investigation, crewmembers exposed mice to X-rays for three minutes, and the scans were relayed to Techshot’s payload operations center almost in real time for review by Earth-based researchers.

Today, the bone densitometer, dubbed Bone D, is “a permanent resident of EXPRESS Rack 7,” Boling says with pride. Right now it’s only being used for rodent research, although it’s possible other living creatures could be scanned with it in the future.

NASA’s grateful for the increased capability on the ISS, Read says. “We’re committing a significant amount of our research crew time to enabling the rodent investigations. Bone D is a big part of the effort. This is an analytical capability we didn’t have before. It’s one of the holes we’re trying to fill, and that’s where Techshot came in.”

Other companies are in talks with CASIS and Techshot to get time on the densitometer, and the company is happy with its potential role in the future of research on Earth and in space.

“For a company of 30 people, we’re terribly excited about this; it’s our flagship product right now,” Boling says. “To be able to own it, operate it, be responsible for it as a commercial model, as a commercial venture—this wasn’t possible a few years ago. The fact that a company would maintain its commercial hardware orbiting the

Earth at 17,000 miles per hour as a small business? We’re excited about the future and what it may hold for companies like Techshot.”

Abstract
As a part of an effort to upgrade ISS research facilities managed by Johnson Space Center, the Center for the Advancement of Science in Space (CASIS) worked with Techshot Inc. to build a bone densitometer suitable for use in space. The Greenville, Indiana-based company_s product, dubbed Bone D, is operating commercially on the station for a number of clients looking to take advantage of studies performed in microgravity. 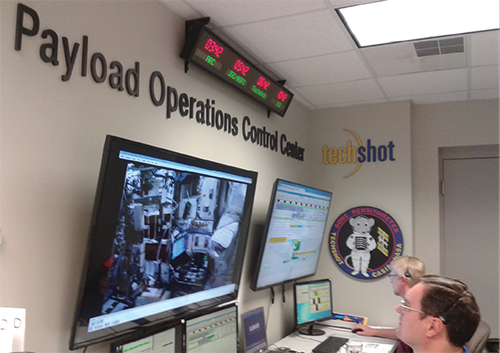 Through an agreement with NASA, astronauts conduct the experiments that use Techshot’s bone densitometer. The company maintains a payload operations center from which it can monitor its space-based equipment and download data in real time.

Techshot worked with NASA and the Center for the Advancement of Science in Space to develop a commercial bone densitometer suitable for operation on the ISS. The device, dubbed Bone D, is primarily used by companies to study the effects of microgravity on mice.