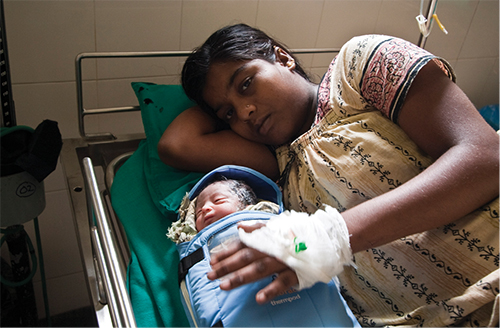 NASA’s astronauts are among the world’s most capable, resourceful, and highly trained individuals. Now technology originally created to keep them comfortable in space is available to the population’s most helpless and inexperienced members—babies.

A spacesuit is, by necessity, almost impermeable to temperature. While its many layers of insulation protect the wearer from the extreme temperatures on its outside surfaces in space, they also work the other way, holding in body heat that, if not regulated, would quickly become uncomfortable. One method NASA investigated in the 1980s for managing heat inside a spacesuit was the use of phase-change materials (PCMs).

Like ice cubes in a drink, these materials steadily absorb heat as they change phase from solid to liquid, and, if exposed to colder temperatures, they release that heat as they refreeze. The trick was finding materials that could hold more heat and transfer it more quickly than water and would change phase at a temperature comfortable to humans. The material would also have to be nontoxic and nonflammable.

In 1987, Johnson Space Center awarded a Small Business Innovation Research (SBIR) contract to Triangle Research and Development Corporation to experiment in using such materials, contained in tiny microcapsules, to create a passive spacesuit liquid cooling garment instead of one based on an active heat exchanger. Triangle had previously worked on an energy storage system using PCMs under two SBIR contracts with Marshall Space Flight Center. In 1988, the company experimented with incorporating these materials into synthetic fibers to insulate an astronaut glove under another Johnson SBIR contract.

PCMs never quite caught on for spacesuits, but a company called Gateway Technologies saw their potential for commercial applications and licensed the exclusive patent rights for incorporating the material into fabrics and fibers. Now called Outlast, the company supplies fabrics infused with microencapsulated PCMs to hundreds of companies that use them in everything from bedding to athletic clothes, dress wear, underwear, pajamas, sleeping bags, and more (Spinoff 1997, 2004, 2009, 2012, 2013).

While Outlast was building its robust customer base, Stanford University MBA student Jane Chen and a small team of classmates were assigned in 2007 to try to come up with an infant incubator that could be manufactured for just $200, or 1 percent of the price of traditional incubators. They hit on PCMs, came up with a prototype, and started a nonprofit called Embrace, with Chen as the CEO. Upon graduating, the group moved to Bangalore, because India has the highest number of premature births per year.

Since their final product was developed, the Embrace infant warmer has been used to treat hundreds of thousands of premature and otherwise low-birth-weight infants in populations lacking access to modern medical care throughout 14 developing countries.

“In 2012, the team realized they wanted to go forward with more innovation and spun off a for-profit, Embrace Innovations,” says Kai Chan, vice president of operations at the San Francisco-based company, where Chen is now CEO after stepping down from her position with the nonprofit.

“A couple years ago, Jane moved back to the Bay area, where many of her friends were having babies,” Chan says. A common complaint among the new parents was that they never knew if their babies were too hot or too cold. Chen decided to look for a solution.

Already well familiar with PCMs, she looked for a way to use them for infant comfort and discovered Outlast. Through a Kickstarter campaign in spring of 2015, Embrace Innovations raised $130,000 and started taking preorders for a line of infant swaddles, sleeping bags, and blankets, marketed as the Little Lotus product line, all made with Outlast linings shot through with microencapsulated PCMs.

All of these products are now available for order through the company’s website.

She cites an informal study showing that 8 out of 11 babies slept on average four hours longer over a five-day period with Little Lotus products, compared to other comparable products on the market.

The Little Lotus line includes a swaddle for infants up to three months old, as well as three sizes of sleeping bags for babies 3 to 18 months old. Also available is a quilted blanket.

The signature Touch Our Futures pattern, available for all Little Lotus products, was created by artist Drue Kataoka and features handprints of mothers and babies from around the world who have benefited from the company’s Embrace Infant Warmer.

The swaddle design includes a side-zipper that allows the front panel to open completely and a second zipper along the bottom for easy diaper changes.

“The premise behind Little Lotus is, we wanted to use the TOMS Shoes one-for-one model,” says Chan. “With every product purchased, a baby in a developing country will be helped with an infant warmer.” She notes that Embrace Innovations retains the same primary mission as the nonprofit it sprang from: to reduce the world’s infant mortality rate by helping to save premature babies in underserved populations. To donate the warmers, the company is partnering with other nonprofits.

The warmers’ removable PCM packs can be heated with boiling water or an electric heater, and reinserted to keep the warmers at about 98 degrees for up to six hours. They’re portable and reusable, and they cost less than $200.

“We’re using this NASA technology not just to keep babies comfortable but also to support our efforts to save premature babies around the world,” Chan says, noting that the company has set a goal of helping 1 million infants.

Abstract
One method Johnson Space Center investigated for managing heat inside a spacesuit was the use of phase-change materials (PCMs). Like ice cubes in a drink, PCMs absorb heat as they change from solid to liquid, and, if exposed to colder temperatures, they release that heat as they refreeze. An SBIR contract led to the creation of fabrics incorporating PCMs, most recently commercialized by San Fransicso-based Embrace Innovations in wraps and blankets that help keep babies at an optimal temperature. 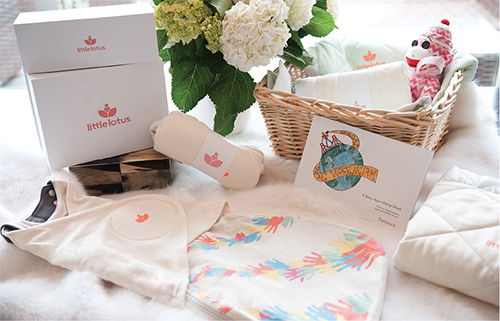 The company’s NASA-derived product line includes baby swaddles and sleeping bags in various sizes, as well as a quilted blanket. Phase-change materials in the products’ fabric regulate body temperatures, absorbing heat when babies get too warm and releasing it when they are cool.

Embrace Innovations’ product line spun out of an MBA-student project to supply baby warmers to populations lacking access to modern medical care. Today, every item purchased from the company results in a warmer donated to an infant in need.