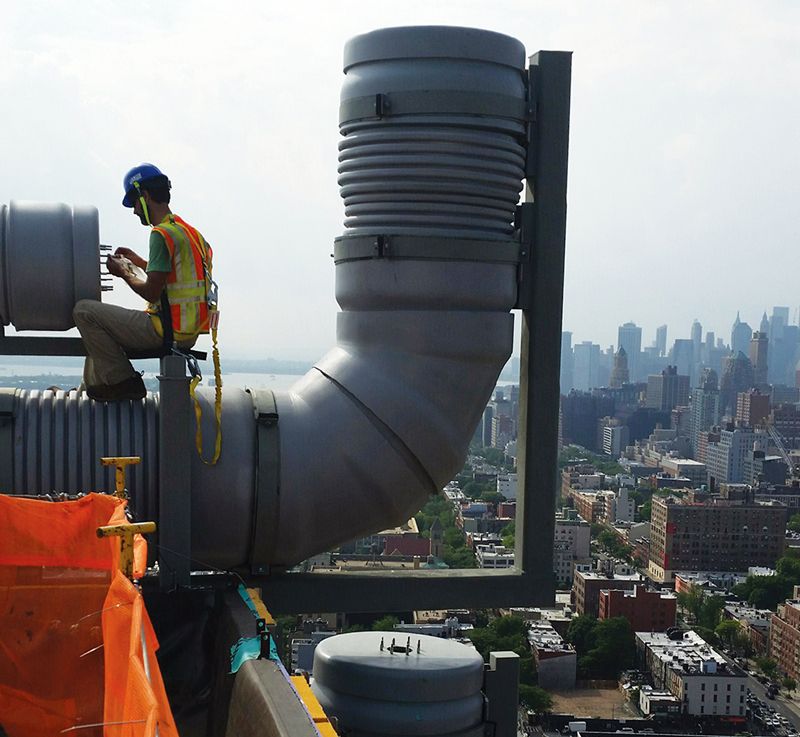 Rocket launches—or earthquakes—are already punishing experiences. But it turns out there are some things that can make them worse: like if the vibrations hit the structure you’re in at just the right frequency to cause resonance, where the vibrations get bigger and bigger, in some cases up from bearable to all out disastrous.

But what if you could turn off that resonance with the flip of a switch? Engineers at NASA figured out how to do essentially that, and the device they created looks to have huge possibilities, from earthquake-proofing bridges to losing the sway in a skyscraper to shoring up an oil rig.

It all started when a team at Marshall Space Flight Center was working on the since-scrapped Ares I launch vehicle, which was set to send the Orion crew capsule into space for destinations including the Moon. The first stage of the launch was powered by a solid rocket booster, which, explains engineer Jeff Lindner, was creating an acoustic resonance.

“All structures have these natural vibrations. We call them modes,” says Lindner, who worked for NASA for many years but worked on this project as a contractor. “Think of a tuning fork: hit it the right way and the sound resonates.

“When you get into trouble on a launch vehicle is when the resonant frequency of the engine lines up with the frequency of the vehicle structure. One is pushing at just the right frequency to drive the other. You have huge amplitudes—and stuff breaks.”

In this case, the “stuff” could even be the crew sitting right above that rocket.

They had to find a way to interrupt that resonance, to stop the vibrations from amping up—typically a complicated and expensive thing to fix, because the frequencies are an integral function of the shape and mass of the structure.

One tried and true solution was something called a “tuned mass damper.” First developed in the late 1800s, tuned mass dampers work by dissipating the energy of the vibrations into a secondary mass, perhaps attached by springs.

However, attaching a giant, heavy damper to a spacecraft was impractical, to say the least. So Lindner and the rest of the team began looking for a new solution. “We were throwing everything at the problem we could think of. Nothing was off the board,” recalls project manager Rob Berry.

Wondering if they could repurpose something already on the spacecraft, Lindner and another engineer, John Townsend, came up with the idea of using the hydrogen fuel in the second-stage rocket: a huge liquid mass that was just sitting around waiting for its turn to get burned.

They tested the concept in the lab and it worked. But the result was not what they would expect from a tuned mass damper: “They were getting a knock-down on vibrations that was 50 to 100 times more than could be explained,” Berry says.

The team began to realize that they hadn’t designed a variation of a tuned mass damper—they’d come up with something fundamentally new. When they put their new device in the fuel tank and set the frequency, they expected to dissipate the force of the vibrations into the liquid, the way a classic tuned mass damper works. But instead, they realized they were actually causing the fluid to act as if it was no longer part of the spacecraft structure, which meant the resonance no longer occurred.

“We realized we’re messing with the fundamental dynamics of the system. We’re not dissipating energy—we have the ability to change the system dynamics before it could ever occur,” says Berry.

They called the device a disruptive tuned mass damper. Berry likens it to a balloon that expands and contracts at a specified frequency. When it contracts, it creates space, which the liquid flows to fill.

“What that means is that little bit of expansion and contraction starts involving a whole bunch of fluid,” Berry says. Now, instead of moving with the vibrations of the structure, that fluid is moving with the contractions of the device. So where before the fluid acted as part of the structure of the rocket, helping govern the frequency it vibrates at—the way more or less water in a glass changes the pitch when you run a finger around the rim—now the fluid is doing its own thing, and the structure will no longer resonate at the same frequency.

“We started thinking, this is great, look what we just did: one small device, less than 100 pounds can knock out the resonant response of a 650,000-pound vehicle. What else can we do?”

By now, the Ares I vehicle had been cancelled. But Berry, Lindner, and the team knew they were onto something that could have huge implications not just for NASA but for private industry as well, and they didn’t want to let the project die.

They began adapting their device to a new setting, an unused building at Marshall that happened to be about as tall as a launch vehicle. The idea was to be ready for whatever vibration problem NASA had next—but they also began looking for users outside the Agency.

“Think about helicopters, bridges, buildings, anything that has a big vibration problem. We now had a new tool to knock out those issues,” says Lindner.

By sheer coincidence, through a conversation at a party, someone at engineering and design firm Thornton Tomasetti heard about the device, and the company was immediately interested. It sent a team to learn more.

Elisabeth Malsch, vice president at the New York City-based firm, recalls walking into the building at Marshall where engineers had used two hydraulic shakers to get the building moving and calmed it with their device, this time housed in a long PVC pipe filled with water.

Then Berry told her to turn off the disruptive tuned mass device.

“It really does feel magical,” she says. “You flip the switch. There’s no sounds you hear. The building movement just starts to take over.”

The Thornton Tomasetti team was convinced: this was worth exploring for their own projects. They obtained a research license to test the technology further and then entered a Space Act Agreement to confirm more details of how the device would work on their structures.

Satisfied with the results, they negotiated a license agreement for the exclusive rights to use NASA’s patent on bridges and buildings and began making plans to install it for the first time on a new building in Brooklyn.

B2 BKLYN is not particularly tall, but it’s extremely light, which means when there’s a lot of wind, the whole structure would sway back and forth in a way that’s very uncomfortable for the people inside.

The Thornton Tomasetti team knew they would need some kind of damper, and the NASA one beat the other options on a lot of levels, Malsch explains.

“The fact that this system is lighter and uses conventional piping means it’s cheaper than what they were going to use in unit price and also easier to get on the building,” she says. “And because we can use conventional parts, that allowed for later design changes than one can usually accommodate.”

The competing systems under consideration either house water in a huge concrete vat, specially designed to match the building’s frequency, or attach a huge mass with springs and cables. Both are expensive, extremely heavy, take up a lot of building space, and are hard to modify once they’re built. “But with the NASA system, a person could tune it within a day, with conventional tools,” Malsch says.

The firm is waiting to see how it performs in Brooklyn before committing to more projects. However, Malsch says, “We’ve certainly had interested parties, and there’s a lot of interest in this working well.” It has begun marketing the system on the company website under the name Fluid Harmonic Dampers.

Berry says he thinks there is every reason to believe this new technology will become standard across multiple industries as people become aware of it and what it can do.

“You can put it in an ocean liner, with a ballast tank. Or in a building with a swimming pool,” he says, and notes that the approach is not limited to fluid systems but could also work by leveraging mechanical masses.

Besides the benefits Malsch listed, he says the NASA-designed dampers work more quickly than traditional tuned mass dampers, which require time for energy to be transferred and dissipated. “But by changing the fundamental attributes instead, it is no longer the same system—and this occurs at time equal zero.”

In addition, traditional systems have to be tuned to either high or low frequencies, which means they might mitigate the high frequencies of an earthquake event but would do nothing to mitigate the lower frequency vibrations from a wind storm. This new device can do both.

The damper has already won a slew of awards for its inventors, including NASA’s Exceptional Engineering Achievement Medal. The Marshall team members have also gotten around a dozen patents related to the innovative technology.

Abstract
In testing, the Ares I launch vehicle displayed a serious vibration problem_shaking that resonated dangerously, causing potentially hazardous conditions in the crew capsule right above the booster. Engineers at Marshall Space Flight Center found a solution, creating a brand new, low-cost, lightweight damper that could become the industry standard for buildings, bridges, and many other structures that vibrate or shake. New York City-based Thornton Tomasetti markets the technology to make buildings safer against the wind and from earthquakes. 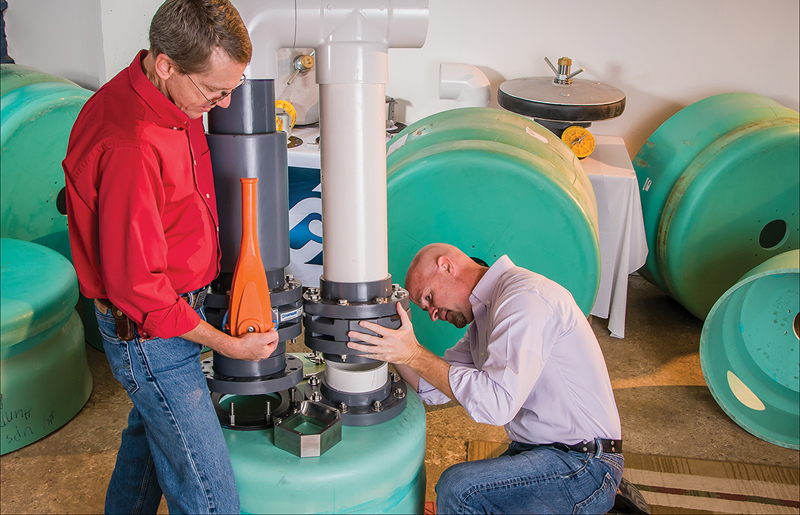 Engineers Rob Berry and Jeff Lindner work on pipes that will contain the disruptive tuned mass device they first helped create for the Ares 1 program. Now they are adapting it for future NASA use and for commercial use, such as in buildings, bridges, or oil rigs. 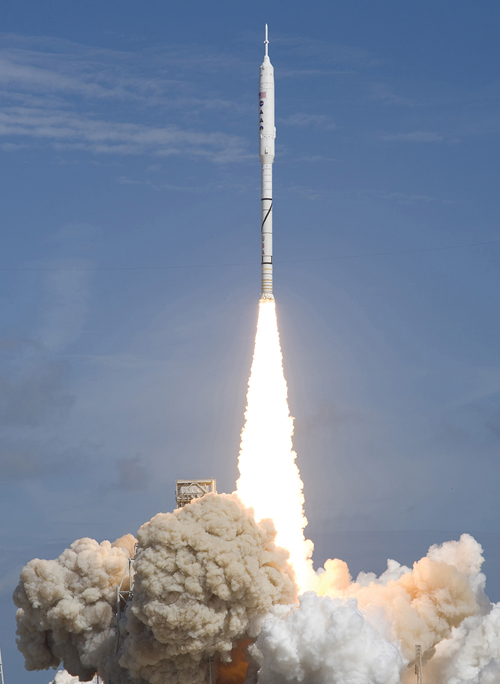 The uncrewed Ares-1X launched in October 2009 on a successful test flight, but the rocket caused vibrations that would have been dangerous to humans on board. Engineers at Marshall Space Flight Center came up with a solution using the mass of hydrogen fuel in the second-stage rocket. 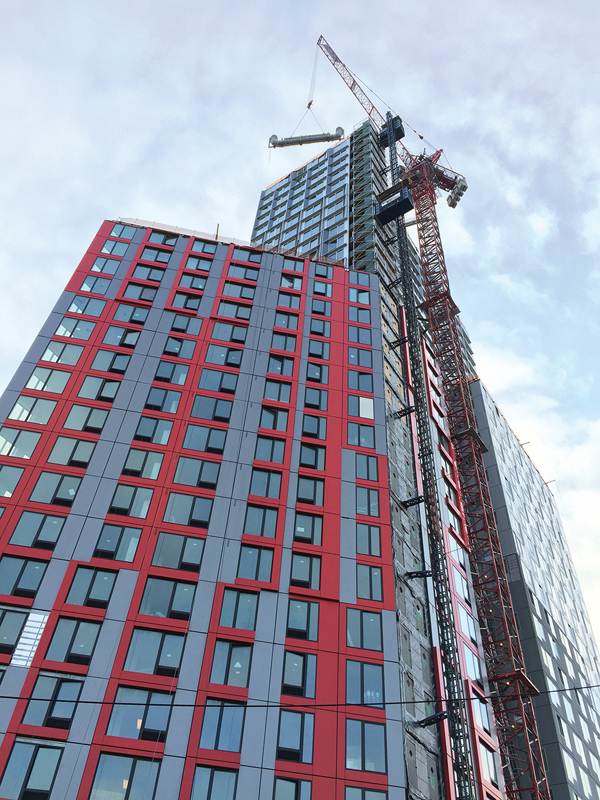 Engineering firm Thornton Tomasetti has licensed the disruptive tuned mass damper technology for commercial use in buildings and bridges. Here a crane lifts a damper to the roof of B2 BKLYN, the first project they are using the NASA-derived technology on.

The NASA-developed devices are installed in four specially designed water-filled pipes along the roof of B2 BKLYN. The damper, which Thornton Tomasetti is marketing as Fluid Harmonic Dampers, is cheaper and more flexible than previous vibration dampening options.