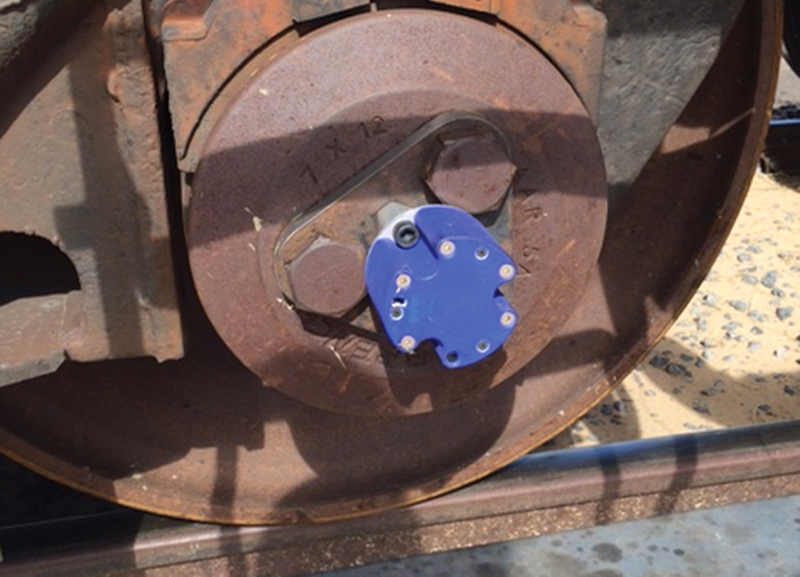 Sensors originally designed to predict failures in a helicopter transmission have found an unexpected use detecting problems in train tracks. When Ridgetop Group created its RotoSense rotational vibration sensor under Small Business Innovation Research (SBIR) contracts with NASA’s Glenn Research Center, the company envisioned applications not just in helicopters but also in automobile transmissions, industrial equipment, and oil and gas drilling. But train axles, too, rotate at a high rate of speed and can indicate anomalies by vibrating irregularly.

“From our perspective, it’s a very promising application of the sensor,” says Andwrew Levy, Ridgetop’s vice president of marketing.

The technology began with NASA’s Subsonic Rotary Wing Project, which is working to ensure the competitiveness of the U.S. helicopter industry and meet Department of Defense requirements, with goals like higher efficiency, less noise, and means to assess and predict the health of components. It was with that last objective in mind that Glenn granted SBIR work to the Tucson, Arizona-based company.

“The goal was to develop a wireless accelerometer that could be installed on a rotating gear in a helicopter transmission to monitor its health and condition,” says Dave Lewicki, who ran Glenn’s Helicopter Transmission Test Stand when the work was being carried out and oversaw both SBIR contracts. Normally, sensors would be placed on the outside of the transmission housing, whereas the microelectromechanical systems (MEMS)-based accelerometers Ridgetop came up with were to be attached directly to components inside the transmission, which is not a friendly environment.

“If you’re rotating at thousands of RPMs, first of all, you need to package the thing so it doesn’t fly apart,” Levy says, adding that the devices also need to withstand exposure to oil and high heat.

But there were more challenges to overcome than ensuring durability. Each sensor is “basically three MEMS-based accelerometers measuring G-force in three directions,” Levy explains. For a device to pick out variations in vibration while sitting on a component that’s whirling frantically inside a rattling motor or transmission, it needs not only exquisite sensitivity but also complex, fine-tuned software. The sensors transmit raw data wirelessly to an outside unit, where all the noise is filtered out to obtain a meaningful vibration signature and, ultimately, what Levy calls “actionable maintenance data.”

Ridgetop delivered two prototype sensors for testing in the transmission of a Bell OH-58 Kiowa helicopter. The first test showed that Ridgetop’s MEMS sensor, mounted on a gear inside the transmission, performed at least as well as traditional sensors attached to the outside housing. Lewicki says he considered this a success, noting that he didn’t expect external sensors to have difficulty monitoring a gear so close to the outside of the device.

“We were happy the MEMS sensors performed as well as the traditional ones, thus validating the concept,” Lewicki says. “The proposed real benefit of the MEMS sensors are situations where the fault components are buried deeper inside the transmission, such as a planetary system.” Lewicki retired before that test could be carried out, but Glenn still plans to complete that project.

In the meantime, Ridgetop took its NASA-validated sensing system and began partnering with companies to develop a final commercial product (Spinoff 2012).

The company marketed its sensors under the name RotoSense, with the hub that communicates with the sensors dubbed Sentinel Gateway. The RotoSense Data Conditioner prepares data from the sensors for processing with the company’s patented Adaptive Remaining Useful Life Estimator (ARULE) software, and the whole product line is known as Sentinel Motion.

The company set out to find other applications for its creation in a world where technology is full of spinning parts.

For example, a rolling train axle is, mechanically, little different from the axles in any other vehicle, but an automobile can go more or less wherever its driver likes, while a train is bound to the same track on every pass. And while a pothole in the road is an annoyance, an anomaly in a train track can mean disaster. So the company hit on the idea of monitoring vibrations in train axles to detect and locate problems with the rails they roll on.

The sensors had to be repackaged to sit on each end of a train axle, right above the meeting of wheel and rail for maximum sensitivity. The basic algorithms for noise elimination remain unchanged, but programming to identify the significance of any anomalies had to be rewritten specifically for rail.

Calling the retooled system RailSafe, Ridgetop took it out to the Federal Railway Administration’s Transportation Technology Center in Pueblo, Colorado for testing.

The first step to testing or using RailSafe is to map the section of rail being monitored, including any junctions, bridges, and other irregularities that the sensors might pick up on. “There are a lot of features in the track that, if you don’t know what you’re rolling over, you don’t know if it’s something expected or something bad,” Levy says. “You need to know what’s there, where they are, and have a map and a visualization tool to alert you as to what was seen and whether it requires action.”

When Ridgetop engineers arrived in Pueblo, he says, the facility’s operators told the company that others, too, had tried putting some kind of sensors on train wheels or axles, and the devices normally didn’t last. “Well, ours did,” Levy says.

Over the course of four nights, four sensors—two on a rail car and two on a locomotive—rolled 400 times around the facility’s 2.7-mile loop. “The people who run these things got progressively more excited about what we were doing,” Levy says. “Even to the old pros at the test track, this is something new.”

Having analyzed the test results, he says, “We’re starting to get a very clear picture of what the sensors picked up and what was on the track.”

Next, the company plans to train the technology to look for any anomalies in a train’s wheels. It’s planned to ultimately be able to perform prognostic reasoning for both wheels and rail, predicting their lifetime and warning of possible failures before they occur by monitoring long-term changes in vibration.

Just the ability to detect a problem in a rail can avert catastrophe, but prognostic capability for wheels and rail would not only go further toward preventing accidents but also save the cost of unnecessary preventive maintenance. Levy points out that the sensors can also perform the simpler task of ensuring that certain standards are met, such as limits on G-forces resulting from cars being coupled.

Ridgetop’s analytical tools can also be used with sensors other than its own.

Ridgetop launched RailSafe in mid-2015 as a kit containing the necessary sensors, data collection hub, and software packages to outfit and monitor trains. To help customers ensure the system meets their needs, the company also offers installation and training services. Levy says the hardware and software appear to be unlike anything else on the market. “Based on the excited reaction of people we talk to about this technology, we get confirmation of that.”

Meanwhile, the company is exploring applications in wind and water turbines, as well as factory floor machinery.

For his part, Lewicki remains optimistic. “Our hopes are that the embedded MEMS sensors will perform better since they are installed directly on the faulty component,” he says. NASA’s eventual validation of Ridgetop’s planetary gear sensor will likely speed that success.

Abstract
Ridgetop Group of Tucson, Arizona, created its RotoSense rotational vibration sensor under SBIR contracts with Glenn Research Center, intending it to be installed on gears in helicopter transmissions to monitor their condition. To create its new Railsafe system, Ridgetop repackaged the sensors to sit on train axles and retooled its algorithms to identify anomalies in rails. The company tested Railsafe and launched it in 2015. Next, Ridgetop will enable it to predict failures in rails and wheels.

Ridgetop Group’s RailSafe sensor fits on the ends of a train’s axles, where it monitors for vibrations caused when the wheels roll over anomalies in the rails.