When Malaysia Air Flight 370 disappeared somewhere over the Indian Ocean in 2014, it had flown far beyond radar range. Under a new space-based air tracking system, no plane would ever be off the grid that way—and it is possible thanks in part to a collaboration with NASA, starting with a reconfigurable radio.

NASA uses powerful radios to communicate with its satellites, rovers, and astronauts. These devices allow us to see everything from pictures of cryovolcanoes on Pluto to tweets from the International Space Station (ISS). In recent years, the Agency decided it needed radios that work on higher frequencies with more bandwidth, to make sending larger quantities of data back and forth faster, and that can be reprogrammed from a distance.

“A reconfigurable radio lets engineers change how the radio works throughout the life of the mission, if requirements change or when the environment does,” explains Thomas Kacpura, Advanced Communications Program manager at NASA’s Glenn Research Center. “It can also be upgraded to work better with future missions or to enhance performance, just by adding new software to the radio.”

In the past, Kacpura says, engineers were reluctant to build reconfigurable devices for space because of testing requirements. They evaluated devices under every conceivable circumstance to ensure that, no matter what happened in space, the radio would keep doing its job. That’s harder to do with a reconfigurable radio—after all, how do you test for functions you don’t even know you’ll be using?

However, Kacpura says recent missions have been allotting a larger size, power, and weight margin for reconfigurable systems. In addition, the culture has evolved and has become more comfortable with in-flight changes, which led NASA to design and develop a new reconfigurable, higher-bandwidth radio with Palm Bay, Florida-based Harris Corporation through a 50/50 cost-share cooperative agreement.

The result of that effort was tested as part of the Space Communication and Navigation (SCaN) Testbed, an experimental communication system on the ISS. The SCaN Testbed project is led by Glenn and was developed in cooperation with the Jet Propulsion Laboratory, Goddard Space Flight Center, Johnson Space Center, industry, academia, and international space agencies, all of whom also currently support experiment activities.

“The Harris SDR is the first space-qualified, software-defined radio in Ka-band,” Kacpura says. Ka-band frequencies offer data transmission rates that are much faster than the previous standard and is considered a key part of future NASA space communications.

The radio has been put through its paces through exhaustive testing both on the ground and in space, has been reconfigured and reprogrammed, and has performed well. In 2013, it was honored with an R&D 100 Award as one of the year’s top 100 most significant innovations.

“This is a big leap,” Kacpura says. “With a few tweaks and updates based on the test runs, this radio could now become the high-speed data radio on any spacecraft,” he adds. This will help get data back to Earth even faster than before, expanding the science return of NASA missions.

The company knew the work it was doing with NASA was going to pay off with its other customers, but, says Harris systems engineer Jeff Anderson, “to be honest, I think we were surprised at just how quickly it was embraced both by our own designers and by customers.”

The biggest selling point of the new device turned out to be its flexibility. It can be fully reconfigured both in its hardware and its software, explains Harris program manager Kevin Moran, which meant the company could quickly and cheaply redesign it to fit any customer’s needs. Basically, “this is a box, and inside there are a bunch of cards that plug in,” Moran explains. “Power supply cards, a processor card, and then there are the cards specific to that mission. So when a customer has a different mission, we only have to change out a subset of the hardware within the box.”

Harris has trademarked the radio, which it calls the Harris AppSTAR, and has already sold it to a wide range of clients.

One of the biggest contracts so far is with Aireon LLC, which has engaged Harris to develop a hosted payload for new Iridium Communications Inc satellites. For the last two decades, Iridium has operated a constellation of satellites in low-Earth orbit, which makes it possible to make phone calls or send data to and from the world’s most remote regions. Unlike other satellites, each of the cross-linked orbiters can communicate with the others, meaning every point on Earth is always within coverage of the network.

In 2016, the company began launching its Iridium NEXT constellation of satellites, with a higher bandwidth and increased capabilities, including Harris AppSTAR radios. Aireon, a joint venture formed by several companies to take advantage of the constellation, will use the radios to create the first space-based global air traffic control system.

For decades, airplanes have relied on radar surveillance, which needs land-based radar stations to receive and transmit signals. That’s left huge gaps—particularly over oceans—where air traffic controllers have no real-time information about a plane’s location or heading. To compensate, pilots file detailed flight plans and are required to remain within prescribed lanes at different altitudes so air traffic controllers can estimate where they are and work to ensure there are no mid-air collisions.

But that is all set to change when the 66 Iridium NEXT satellites go into orbit, equipped with Harris AppSTAR radios. The AppSTARs are programmed to receive signals from new airplane transceivers called ADS-B, which automatically send out the flight number, location, heading, and other flight details.

Currently, similar data is transmitted to other airplanes in the area and also collected by terrestrial receivers on the ground. Anderson points out, however, that the receivers require a line of sight to communicate, so as soon the airplane goes over the horizon, receivers on land can no longer detect the signal. As a result, many planes flying over the ocean and other remote areas can’t be tracked at all.

Putting the receivers into orbit solves that problem. “Within seconds you can keep track of all the aircraft in the world,” says Anderson. Aireon has already signed contracts with a number of air traffic control agencies to integrate the space-based system into their flight tracking when the system goes live in 2018.

Nav Canada, a founding partner in Aireon, was one of the first. “Think of the size of Canada,” says Moran. “If they were going to take advantage of this ADS-B system, they would have to go through this massive terrestrial build-out in very remote locations. The alternative is a space-based system.” Agencies in many other countries, including the U.S. Federal Aviation Administration, have also expressed interest.

With real-time global tracking, airlines will be able to optimize their air traffic control patterns, Anderson explains. Planes can fly with less space between them, as well as take more direct routes. “It tremendously improves public safety and potentially saves a lot of fuel costs, because you no longer have to remain in the particular airline traffic lanes.”

And when something does go wrong, like with the Malaysia Air flight that disappeared, search and rescue teams will have detailed information on where to look, because the satellites will receive tracking information from every airborne plane, even those in areas not subscribing to the Aireon tracking system. “Aireon will provide a free service, which they call Aireon ALERT (Aircraft Locating and Emergency Response Tracking), through which, if there is an airline issue, they will provide the last track that they have in their system,” Anderson says.

The AppSTAR radios on the Iridium satellites were designed with extra space, Anderson adds, so Harris was able to add yet another function: the same kind of global tracking for ships, which the company markets as exactAIS RealTime, powered by Harris with their partners exactEarth.

“We’ve taken that reconfigured processor card and changed it a little bit yet again,” says Anderson, and now it can address the maritime VHF frequency range, which broadcasts automated ship tracking. Out on the open ocean, ships can communicate with each other but not with the terrestrial system. Adding just one more card to the AppSTARs hosted by Iridium, however, suddenly allows any shipping company to know where its vessels are and track the shipping lanes worldwide.

And because the AppSTAR software can be reconfigured remotely, both the Aireon and exactAIS systems can be updated well after launch, “if we need to modify them, or if we need to change them for future changes in the architecture or formats,” he says. “We can make the changes off into the future.” And it all started with the same box, processor, and power supply cards as the NASA radio.

“I remember our first discussions with NASA Glenn in 2008,” says Janet Nickloy, vice president of Responsive ISR Programs, Space and Intelligence Systems. “We knew we had a good idea, but we never imagined it would lead us to where we are today. Working together, we not only furthered the NASA mission, but will make air and marine travel safer for the global community. I can’t wait to see where we go next.”

Abstract
NASA was looking for a new high-bandwidth, software-reconfigurable radio. Through a 50/50 cost-share cooperative agreement, Glenn Research Center developed one with Harris Corporation, and the final product flew in the ISS SCaN Testbed and was honored with an R&D 100 Award. The Palm Bay, Florida-based company used what it built to create its AppSTAR radio, which soon will be tracking airplanes worldwide.

With real-time flight tracking, planes can safely optimize their flight routes and fly with less space between them. And if a plane disappears, emergency responders will have exact tracking information to start their search. 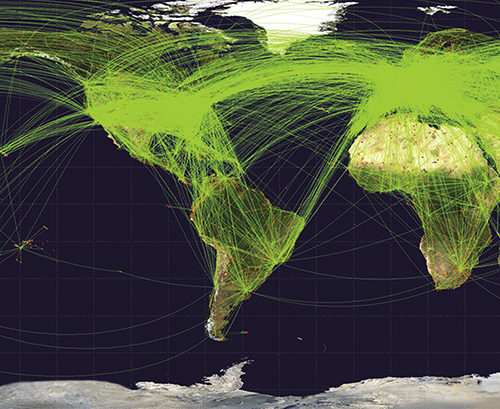 This map plots scheduled flights—more than 50,000 of them—from June 2009. With Aireon flight tracking, air traffic control agencies will be able to see, in real time, the location and heading of every plane in the air. Image courtesy of Wikipedia user Jpatokal, CC BY-SA 3.0

NASA wanted a higher-frequency space-based radio that can be reprogrammed from a distance. Harris Corporation worked with the Agency to design one, and is now selling them commercially as the AppSTAR. In this artist’s rendering, the radio is mounted on the satellite under a white cover.