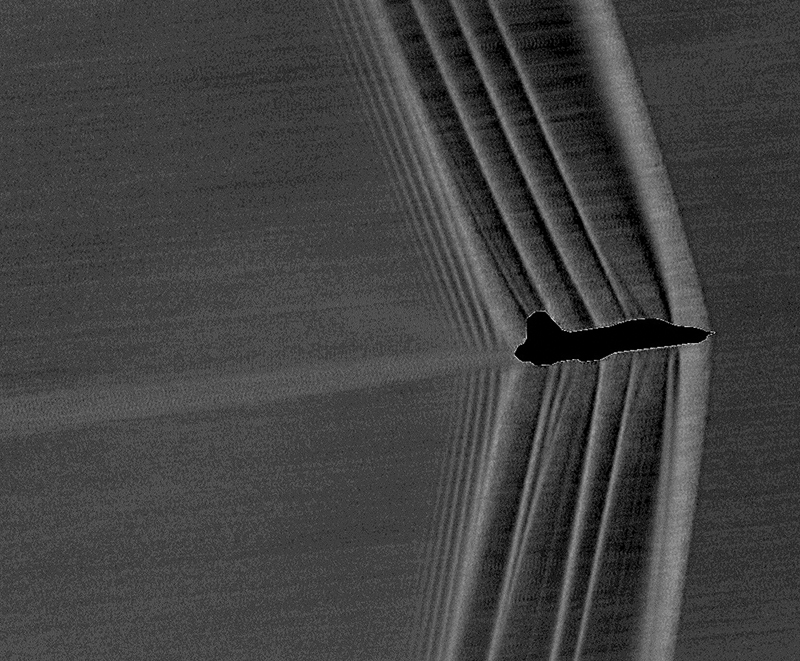 It’s been more than 70 years since an airplane first broke the sound barrier, and yet supersonic flights remain mostly out of reach for civilian passengers, in large part because of the massive sonic boom that resonates when an aircraft hits supersonic speeds.

NASA wants to change that, and in 2016, the Agency announced an initiative called Quiet Supersonic Technology (QueSST) to build an experimental airplane that can break the sound barrier without rattling windows on the ground. Private industry is also intrigued by the possibility of quieter supersonic jets, and some of the software NASA has created for its work is proving quite useful to those companies as well.

Part of the complexity of designing an airplane is the way every decision impacts everything else, says aerospace engineer Michael Aftosmis, who works in the advanced supercomputing division at Ames Research Center. “You need to make sure that the engine is big enough to overcome the drag, so you need to know the drag before you can figure out how big an engine you need to put in. And if the engine is heavier you need more lift to carry that,” he explains.

To see how a given design will perform, engineers can build models and test them in wind tunnels, but that is cumbersome and expensive. Early software to mimic wind tunnels, called computational fluid dynamics (CFD), was hailed as the way of the future, a virtual simulation that would replace physical testing.

However, that early software was, itself, time-consuming and expensive. The calculations were so intensive computers needed weeks or sometimes months to get an answer. And even before the calculations could be run, engineers had to prepare the computer model for simulation by mapping out a grid, called a mesh, around the vehicle. The process required not just tedious labor but also expertise—if it wasn’t done well, the results would not be accurate. The more complicated the aircraft, the longer it took.

Aftosmis came up with a way to automate the process so the computer created the mesh, no matter how complex, in seconds. His solution was to simplify the problem: instead of bending each cell around the shape of the airplane, resulting in a complicated array of differently shaped cells, Aftosmis and his team filled all the space with square cells. Where those cells came into contact with the aircraft, they clipped the bits that didn’t fit.

“We went from a situation where every mesh was dependent on every geometry to a program that treats every mesh the same. Cells are either simple or complicated, and the complicated ones we just handle using algorithms from computer graphics,” he explains.

Ames released the resulting software, Cart3D, in 2001, and Aftosmis says it added a new way for engineers to use CFD: “Rather than just doing one solution that you try to extract a lot of data from, it makes it very easy for the engineer to do many solutions from which they can extract trends and behavior.”

The software is now used by every mission directorate at NASA, helping to simulate everything from the flight of the Space Launch System to what may happen as a meteor enters Earth’s atmosphere.

Aftosmis and the QueSST team use it, too. “Right now the FAA doesn’t allow supersonic transport over land, because it’s too loud,” says Aftosmis. “That’s why you’re still flying slow from Los Angeles to New York. To be able to change that we need to be able to fly supersonically more quietly. And that’s exactly the project we’re involved in with Cart3D.”

Because Cart3D is so fast, engineers can work backwards from the performance they want the plane to achieve. “For example, in the case of a sonic boom, we can come up with an acceptable pressure signature on the ground and reverse engineer the shape of the airplane that will give us that shape on the ground,” Aftosmis says.

Although Cart3D made CFD easier and faster, it was still in many ways inaccessible for the broader commercial world of airplane designers. “The software is command-line driven, and it requires skill with UNIX and access to supercomputers,” Aftosmis explains.

That changed, however, when Desktop Aeronautics acquired the license from Ames to distribute the package commercially. The company, which has since been acquired by Reno, Nevada-based Aerion Corporation and rebranded as Aerion Technologies, created a graphical user interface to help guide the designer through the process of using Cart3D.

Desktop Aeronautics was using Cart3D in its work designing a supersonic business jet for Aerion, explains Colin Johnson, now senior vice president for software development at Aerion Technologies. Seeing possibilities for the software to be used more widely in industry, Desktop Aeronautics sought and was awarded a Small Business Innovation Research (SBIR) contract to develop a plug-in, and as part of that process, it negotiated the commercial license for the whole software package (Spinoff 2012).

Desktop Aeronautic’s contribution is key, Aftosmis says, because while NASA designed the software specifically to make CFD easier, the Agency wasn’t in a good position to create the user-friendly interface commercial designers needed. Each interface needs to be redesigned for different operating systems, and once built, the software requires sustained maintenance.

“This is something that industry does remarkably well,” Aftosmis says, “so it’s a perfect partnership from that perspective.”

The commercial software, called GoCart, also integrates the additional applications the software requires, so you can just launch a single program and get full access to the data you need.

“Then it guides the user through in a logical way,” Johnson explains. This is especially useful for intermittent users, because “if they walk away and don’t come back for six months, then they may have forgotten the things they need to keep track of.

“We’ve actually packaged Cart3D to be user-friendly enough that students are able to work with it in their design projects at universities,” he adds.

Aftosmis and his team also continue to work on increasing ease of use. Recently, they have been able to add a new parameter to allow engineers to specify how accurate an answer they need. “Then Cart3D can automatically mesh the geometry to meet their tolerance. We’re trying to automate the solution process to remove any dependence on skill.”

When Aerion acquired Desktop Aeronautics, it retained the commercial license for Cart3D and continued investing in the software. Current customers include commercial space companies in the United States, as well as major Government contractors and universities.

And Johnson sees potential to grow the business in a variety of ways, from offering a less expensive, stripped-down version for occasional users to expanding the capabilities beyond aviation.

Nevertheless, this sort of high-end software will never sell millions of copies, he notes, which is why the original NASA investment was so crucial.

“There are things that need to exist, but it’s difficult for the private sector to justify their creation. And that’s typically where government steps in. Much of NASA’s charter is essentially to do that. It is blazing a trail, and now, as that problem is becoming solved, they can hand it off to private industry,” he says.

“NASA needed Cart3D, but there wasn’t going to be any private company to build it. And now we’re in this position to broaden the impact of that capability. But we wouldn’t have gone into it had NASA not created the foundation in the first place.”

Abstract
Computational fluid dynamics (CFD) was hailed as a way to replace costly wind tunnel testing, but the software was time-consuming and itself costly to implement. Michael Aftosmis at Ames Research Center came up with a way to simplify and automate CFD processes. Desktop Aeronautics, now owned by Reno, Nevada-based Aerion Corporation, acquired the commercial license and added features to make it more user-friendly, and they have clients among universities, Government contractors, and commercial aerospace companies. 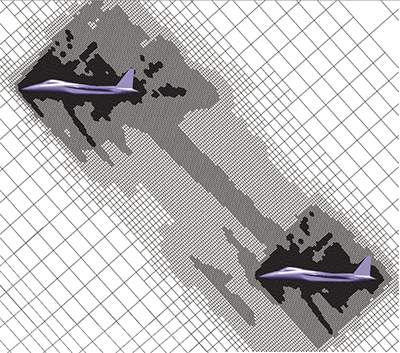 Cart3D automatically generates the mesh—the 3D grid—around the airplane, a process that had previously been complicated and time-consuming. The mesh, in this case around fighter jets flying in tandem at supersonic speed, helps the software run calculations about how the planes would perform in real life.

This photo, taken to help NASA engineers working on making sonic booms quieter, shows the air flow around an airplane as it surpasses the speed of sound—a visual representation of breaking the sound barrier.