No human venture into space is a success until craft and crew have safely returned to Earth.

With their familiar orange and white stripes, the Orion capsule’s three main parachutes hark back to the chutes that signaled the completion of each Apollo mission. There have, however, been updates to this crucial system since the early days of spaceflight, several of which have now found their way into the landing systems of some of today’s commercial space companies. For example, while the Apollo parachutes were made entirely of nylon, Orion’s suspension lines and risers—the structural grid that suspends the vehicle beneath the parachutes—are made of Kevlar, a material that has a much higher strength-to-weight ratio but wasn’t invented until Apollo’s final missions.

Other changes use more recent innovations. Rather than vent lines, which stretch across the vent at the top of a parachute and run the risk of tangling upon deployment, Orion’s parachutes are crowned with a “vent hoop”—a solid ring of Kevlar that secures all the chutes’ radials. This was an innovation Sandia National Laboratories came up with in 2001 while working with NASA on prototypes for the X-38 crew return vehicle, a project that was later dropped.

“It’s a very elegant way of removing the risk of flailing of the vent and the tangling of lines,” says Koki Machin, Johnson Space Center’s chief engineer for Orion’s parachute assembly system, who also worked on the X-38 Program.

In 2006, after bringing on Airborne Systems, whose Space and Recovery Systems branch is located in Santa Ana, California, as a subcontractor to build the parachutes, Machin asked that the company also incorporate textile reefing loops. The main parachutes, as well as the drogue parachutes that deploy before them, fill with air in stages to slow the space capsule gradually, with reefing lines initially holding them partially closed. Traditionally, the reefing lines are secured with metal rings, but these can be crushed in the packing process, Machin says.

In other ways, the parachutes borrow heavily from Apollo’s. “The layout of that drag surface is very similar to what Apollo did,” Machin says. “In some respects, they’re just a larger version of Apollo.” The 13,000-pound Apollo capsule returned to Earth on three 84-foot-diameter parachutes, while Orion, at about 20,000 pounds, uses parachutes 116 feet across.

Another difference between the Apollo era and the present is that NASA is no longer the only player in American space exploration. Parachute system designs tested to Space Agency standards now find a ready market in the several companies developing their own spacefaring systems.

Airborne Systems has a long history of providing parachutes for NASA vehicles, from a Venus Pioneer probe launched in 1978 to the Space Shuttle’s landing parabrake. Parachute systems the company is now supplying to commercial aerospace companies SpaceX, Boeing, and Blue Origin all benefit from that background, but more specifically from work on Orion.

“We could take the lessons we learned from work we did for Orion and directly apply them to the SpaceX work,” says Kurt Hempe, director of space and inflatables at Airborne Systems.

SpaceX uses parachutes that Airborne based on the Orion landing system to land its Dragon capsule, which has been flying supplies to the International Space Station (ISS) since 2012.

“NASA is able to afford all the development testing we’re doing for the parachutes,” Hempe says. “These commercial companies can’t afford to spend the money to do that testing. It saved these companies millions and millions of dollars.”

As spacecraft systems go, parachutes may seem relatively low-tech, but they are not among the cheapest to develop. This is because there is no way to test them in a lab. “We don’t know how to model whether and how they will inflate—it’s purely empirical,” Machin says. “The test program is very expensive.”

The parachutes, installed in a mockup of their spacecraft, have to be dropped from high altitudes to see what will happen. And with the lives of the crew on the line, this has to be done repeatedly. “You have to do extensive tests to characterize the behavior of parachutes,” Machin says. “And you have to give them the opportunity to fail, and demonstrate where you might need design changes.”

This likely means more than a dozen drops. It’s why, even after Orion’s first successful, unmanned test flight to and from space in 2014, NASA was still dropping models of the capsule the following summer —now with one main parachute and one drogue chute crippled—to make sure the system was failsafe.

One lesson the team learned from the tests, Machin says, was that the system’s pyrotechnic reefing cutters were unreliable in their existing configuration. After the parachutes deploy, explosive cartridges in these cutters drive their blades through the reefing lines that hold the chutes partially closed, letting them open one stage at a time. Failure to cut a reefing line in either a drogue or main parachute would mean the chute would fail to fully open, which could easily lead to disaster.

Following cutter failures in the tests, engineers moved the devices’ arming lanyards, changed the way they were armed, and added a sleeve to tightly control their direction, Machin says. “That also has become standard for what Airborne is doing for other customers.”

In addition to improvements like cutter sleeves and textile reef line loops, Hempe says the video footage and data from repeated drop testing have helped the company compare seam and joint techniques, learn where the parachutes can benefit from reinforcement, and see where lighter materials can be used. “The name of the game in the space business is to make things as light as possible, but they also have to be as strong as possible,” he says.

Machin says the work with Airborne presented an opportunity for NASA to push some of the lessons the Agency has learned and innovations it’s made, such as advanced hardware and modeling capabilities, out into the market. “We were able to bring those to bear in the requirements for our parachutes,” he says. “The companies might have gotten there eventually, but we were able to accelerate the process.”

Abstract
Airborne Systems Inc., whose Space and Recovery Systems branch is in Santa Ana, California, worked as a subcontractor to build the parachute system for the Orion capsule. The design is based in part on the Apollo spacecraft_s parachutes but incorporates updates and improvements requested by Johnson Space Center, which managed the contract. Johnson also carried out costly, repeated drop tests to prove the parachutes, which Airborne Systems now sells to several commercial spacecraft companies. 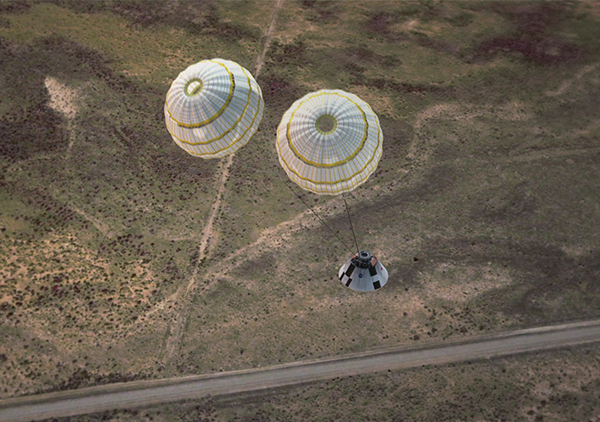 Orion’s parachutes deploy in stages. First, drogue chutes are deployed to stabilize and slow the spacecraft. 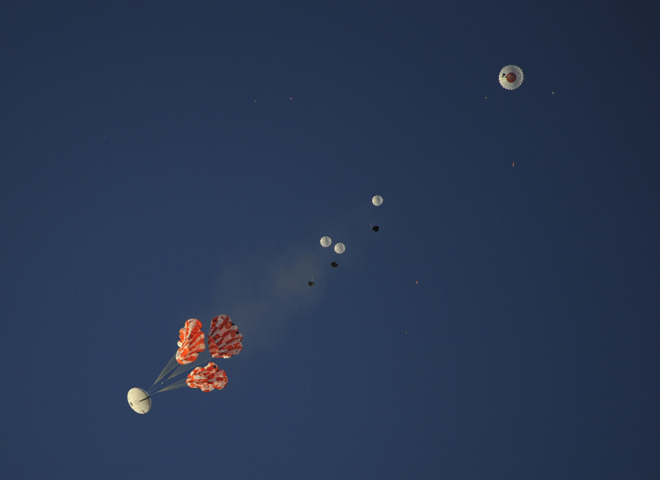 After the drogues are cut loose, three tiny parachutes help pull the main chutes out of the capsule’s forward bay. 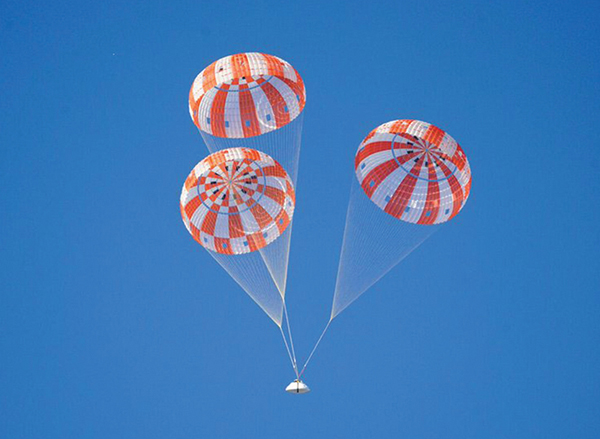 After the main parachutes are deployed, the reefing lines that hold them partially closed are cut one by one until they’re fully open, carrying the craft to safety.

Members of the Orion parachute team, the Exploration Flight Test 1 recovery team, and the U.S. Navy practice parachute recovery procedures in the Neutral Buoyancy Lab at Johnson Space Center. As part of the parachute team, Airborne Systems built the chutes to Johnson’s specifications and has commercialized them for spacecraft companies.