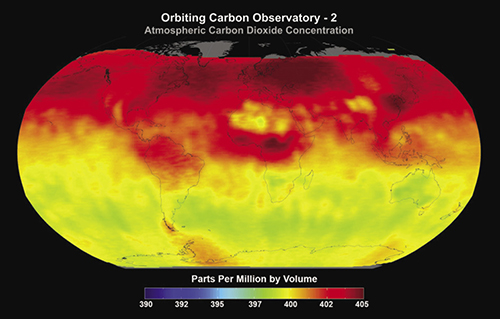 Life on Earth is surrounded by, and dependent on, carbon dioxide (CO2). Plants need it for photosynthesis; people and animals exhale it; industry and vehicles release it as a byproduct of combustion. The gas’ role in climate change is clear to scientists, but another mystery remains—how CO2 concentrates and dissipates in the atmosphere throughout the year, and when and why that happens.

Three NASA centers—Goddard Space Flight Center, the Jet Propulsion Laboratory (JPL), and Langley Research Center—are designing instruments to study this question from space. The project, a potential future satellite dubbed Active Sensing of CO2 Emissions over Nights, Days, and Seasons, or ASCENDS, was named as one of 15 missions of critical importance for NASA in the 2007 Decadal Survey for Earth science by the National Research Council.

Langley’s submission to the mission is an active remote sensor capable of taking CO2 readings in darkness and during the day, explains Mike Obland, a research scientist in the Atmospheric Composition Branch of the Science Directorate at Langley. The sensor also allows for better measurement of CO2 near the poles, where the sun’s angle is low, and over the ocean when there’s significant cloud cover.

The sensor uses a trio of lasers that continuously beam through the atmosphere. “We scatter off a solid target, either a solid cloud deck or the ground,” Obland says. The three lasers are set to slightly different wavelengths—one that is largely absorbed by CO2 and two that are mostly scattered—and the tool measures the amount of light scattered back to gauge CO2 concentration.

The Langley sensor uses a continuous laser while Goddard’s submission relies on a pulsed laser. The continuous data can be compared to the pulsed data, as the readings from the three lasers are obtained simultaneously.

The proposed satellite hasn’t yet been built, in part due to funding constraints, but the centers continue working on their potential contributions. The next Decadal Survey, in 2017, might reprioritize the satellite and encourage NASA to complete it, says Obland. On the other hand, he adds, given that multiple satellites launched since 2007 are now studying the carbon cycle from space—such as the Orbiting Carbon Observatory-2—the survey might instead recommend eliminating ascendS altogether.

Even if it never flies, the spirit of the project is sure to live on thanks to a Langley contractor who worked on the project from 2006-2009.

J. Stewart Hager worked as a NASA subcontractor at Langley through consulting firm Atmospheric and Environmental Research. One day during lunch, the company’s ASCENDS team brainstormed alternative uses for the instrument on Earth.

“I thought: car exhaust,” Hager says, noting that an estimated 40 percent of atmospheric CO2 comes from burning fossil fuels. “It would save people a trip to the emissions testing station. You can just analyze the exhaust coming out of the back of the car from about five meters away.”

Soon after, Hager left his contractor job in 2009 and founded Knoxville, Tennessee-based Hager Environmental and Atmospheric Technologies (HEAT) Inc., devising a monitor for CO2 and other exhaust emissions based on the Langley ASCENDS tool. The company’s Emissions Detection and Reporting (EDAR) system uses lasers to read CO2, carbon monoxide, nitric oxide, and total hydrocarbons, along with individual hydrocarbons like methane, ethane, and ethylene.

The technology contained within the EDAR system is a considerable advance over the machines at emission testing stations, Hager says. Like the Langley instrument, Hager’s system uses lasers that are both reflected and absorbed by CO2. Measuring the difference in the amount of each laser that returns to the EDAR provides the results from each vehicle. “We’ve improved the sensitivity and the reliability of remote sensing systems for car exhaust tremendously.”

The EDAR system is a little slower than Langley’s flight-qualified tool but also less expensive, and the results for on-the-ground tests are just as accurate. The system is installed on poles over high-traffic areas, where it monitors cars as they pass through.

Arizona, Connecticut, and Tennessee are the first states to deploy the EDAR systems. Agencies in those states are using the sensors “to audit the fleet of registered vehicles in cities where air quality does not meet the [Environmental Protection Agency’s] emission standards in order to assess the effectiveness of their vehicle emission testing program,” Hager says.

HEAT also has a research project underway with the California Air Resource Board, directed toward heavy-duty diesel trucks and evaporative emissions, such as gasoline vapors that escape from leaky gas tanks, loose hoses, or cracked pipes.

Some people drive around without emissions reducers in their exhaust pipes until it’s time for their periodic test, Hager says. When that happens, the test results won’t be an accurate representation of that vehicle’s normal output. Real-world output depends on the driving habits of the vehicle’s owner. There’s also the possibility of vehicles overriding regular emissions testing systems, as was the case with some Volkswagen models in 2015. Having the EDAR system overhead all the time means each vehicle is tested, possibly without the driver’s or manufacture’s awareness,” Hager adds.

The scan takes about a second and a half to complete, and each test results in a three-dimensional, multi-spectral image and a two-dimensional outline of the vehicle with its plume of emissions. Any interfering air molecules or pollution are identified and do not contaminate the results. “We know exactly if it’s that vehicle the emissions are coming from because we scan over the entire width of the vehicle,” Hager says.

If the technology were adopted nationally, Hager envisions that drivers whose cars pass emissions standards could receive a notification absolving them of having to come in for a test, while owners of out-of-compliance vehicles would have to be inspected.

While he understands the hesitancy on the part of government agencies to leave a known and trusted system in favor of new technology, he says the NASA origins of the system lend it credibility with potential clients. “NASA opened a lot of doors for me,” says Hager. “The Agency spends a lot of money to make sure things are going to work the first time. When people learned I worked for NASA, they knew they had to take me seriously.”

Abstract
Through the ASCENDS project, NASA hopes to learn more about how carbon dioxide (CO2) seasonally concentrates and dissipates in the atmosphere. A contractor from Langley Research Center who worked on the project went on to found Knoxville, Tennessee-based Hager Environmental and Atmospheric Technologies (HEAT) Inc. HEAT_s first product, based on a NASA sensor designed to measure atmospheric CO2 from space, remotely measures car and truck emissions and is currently used by four U.S. states to check vehicle compliance. 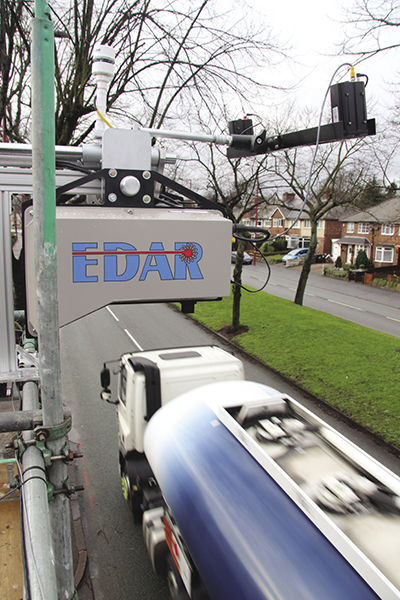 Hager Environmental and Atmospheric Technologies’ Emissions Detection and Reporting (EDAR) system has been purchased and installed by four states for various programs related to validating vehicle emissions compliance. In the future, EDAR could make drive-in emissions tests obsolete, replacing them with remote, laser-based sensors that can scan cars and trucks as they pass underneath.