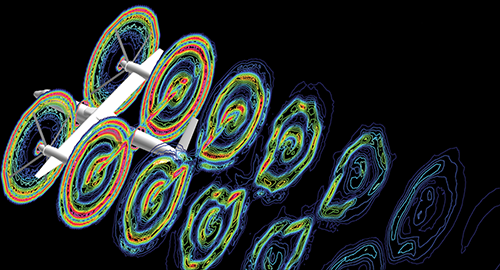 In the 1980s, the Iowa State University professor, who teaches courses on CFD, aerodynamics, and rotorcraft, among other subjects, frequently worked as a consultant for Boeing Rotor Systems—then called Boeing Helicopters—but the company often wanted help on projects too secret to bring in outside parties. “They asked, ‘Could you develop software that will help us solve these problems so we won’t have to involve you?’” Rajagopalan recalls.

He started work on such a program, founded his Ames, Iowa-based company in 1991, and landed a Small Business Innovation Research (SBIR) contract with NASA’s Ames Research Center in 1999. By the following year, Boeing, Sikorsky, and Bell Helicopter were all using his Rot3DC program to model air flows generated by rotors. Under a series of SBIR contracts with Ames and the Department of Defense, Rajagopalan continued to build on the package, adding software modules, and two 2010 contracts with Ames finally resulted in the RotCFD—short for “rotorcraft CFD”—program that he hopes will one day be used not only in the industry but also in schools across the country.

“The main point is that this is a tool that everyone from high school kids on to NASA scientists can use,” Rajagopalan says, noting that the program is comprehensive in terms of the depth and breadth of rotor CFD problem-solving it can do, but also easy to use and only as complicated as users need it to be for their purposes. “In one tool, NASA made it possible to bridge the gap from a very basic level to the very top level.”

“At its core, it’s an unstructured, unsteady Navier-Stokes computational fluid dynamics solver,” says Larry Young, a research engineer who regularly uses the software in his work on novel aircraft concepts in Ames’ Aeromechanics Office, noting that other such programs exist. What sets RotCFD apart, he says, are its user-friendly interface, its focus on rotorcraft, and its automation of some of the more complex and esoteric functions of CFD.

For example, Young says, the program simplifies some of the higher-fidelity details of modeling, such as the flow near and about the rotor blades, to speed up the code while still producing reliable results. More importantly, it automates the generation of the grid that characterizes the air around the vehicle model.

In any CFD model, the air around the craft has to be broken up through a grid-generation process into tiny bins, called cells, whose ideal size and geometry depend on factors such as their proximity to the vehicle and the amount of force being modeled. In other professional programs, it’s often a painstaking manual process. “A significant amount of a professional CFD analyst’s time is taken up doing that,” Young says, adding that most non-CFD engineers don’t even know how to begin the task. With RotCFD, he says, “All you need to do is import a [computer-aided design] model into the code, or generate your own model, and then run the code, and it generates this grid for you.”

Simplifications like these make the program ideal for novice analysts, as well as professional research and design engineers who, like Young, are not necessarily CFD experts, he says. “Progressively, over the last three years, we’ve been using it more and more, and it’s become a fairly significant activity.”

In addition to predicting the flow of air from a rotor—or multiple rotors—around a vehicle’s body, the software can solve wake interaction problems, such as examining how the outwash from a rotor will interact with buildings and other structures at an airport, he says, noting, “You don’t want to have too high a velocity blowing past people and things.” It can also be used to model the airflow of propeller-driven airplanes and unmanned aerial vehicles, jet engine exhausts, and wind flows around buildings, and it has modules for additional capabilities, such as acoustic assessments.

“Without the SBIRs, there’s no way I could have done something like this myself,” Rajagopalan says, noting that NASA not only supplied financial support, but the Agency’s engineers also provided input that played a significant role in shaping the final product.

Following the creation of RotCFD, Sukra Helitek won another Ames SBIR contract—its eighth—to further refine the program toward analyzing the ways that planes capable of vertical or short takeoff interact with their surroundings in an airport.

Rajagopalan still keeps four or five full-time employees as he continues to develop the product. In addition to major helicopter manufacturers and a number of NASA employees, he says, the Army uses the software for problem-solving, and he uses it in his teaching, working with college and high school students. Young has also used the program with a number of student interns at Ames over the last couple of years.

Before he began using the product, Young would have to call upon CFD specialists to analyze any aircraft design he came up with. Now, he says, the software saves time and effort by letting him easily analyze his designs himself. “It allows freer rein in terms of innovation,” Young says. “I can look at more concepts without having to draw in resources at the beginning.”

The program is also capable of modeling complex, exotic configurations that might once have required a supercomputer, he adds. “Students can do some pretty powerful things with minimal ramp-up time. For student projects, that’s really good for stretching their conceptual design skills.”

He’s already used the program for a paper he wrote on the operation of tilt-rotor vehicles at a vertiport, and he uses it for other purposes, such as predicting turbofan jet engine plumes on airport properties and supplementing wind-tunnel testing of rotors. His students have designed everything from “octocopters” to rotary-wing decelerators for a Venus probe using the software.

“I merely was looking for tools that could help me out to do a better job, and RotCFD is one of those we’re now working with,” Young says.

“Larry is one of my most sophisticated users who will use every function he can find in it,” Rajagopalan says, noting that others may use it to delve deep into the science behind specific problems they’re trying to solve.

He sees a broader market and a more interesting legacy, though, not in the industry but in the world of education, where the software could open what is still a fairly obscure discipline to a wider audience, introducing CFD to students as early as high school.

“You build the knowledge, and you provide the tool that they can use up to their PhD if they want to,” Rajagopalan says. “Everything, really, is within the scope of this product.”

Abstract
Following a 1999 SBIR contract with Ames Research Center, Sukra Helitek Inc. released its Rot3DC program to model air flows generated by aircraft rotors. A series of additional NASA and military SBIR contracts for the Ames, Iowa-based company, including seven more from Ames, has resulted in RotCFD_short for rotor computational fluid dynamics. The software simplifies the esoteric and time-consuming work of modeling how rotorcraft designs would move the air around them, opening the field of CFD to students and NASA engineers alike. 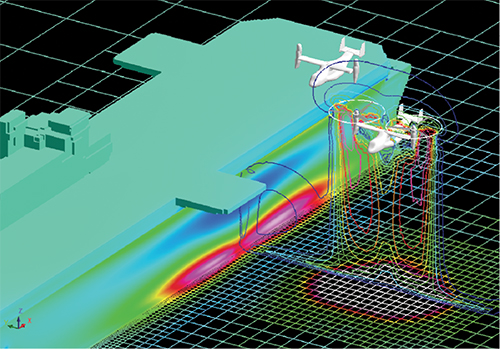 RotCFD is often used to model the ways that air flows from rotorcraft will interact with surrounding buildings and other objects, for example at airports.

Sukra Helitek’s RotCFD program, short for “rotorcraft computational fluid dynamics,” models air flow generated by rotor configurations. The software is noted for being easy enough for high school students to use while retaining enough functionality to be useful to doctoral students and NASA engineers.