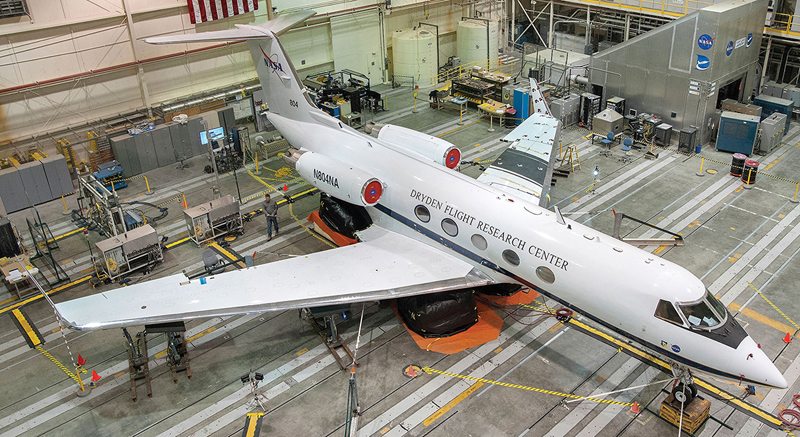 Facilities for mechanical loads testing of aircraft and spacecraft are often jungles of cables, wiring, and hoses.

A typical structural loads test measures the strength and endurance of aircraft structures by applying mechanical forces to simulate the stresses of takeoff, flight, and landing. This is accomplished via a system of hydraulic actuators attached to the aircraft, each connected by a pair of hoses to a servo valve that controls the movement of the actuator and a load cell that measures the applied force. Dozens of surface gauges also measure strain at other locations on the vehicle. Each of these elements is normally wired to a control system. Given that a large test might use more than 200 actuators, all this amounts to miles of connections between the aircraft and the control system.

The Flight Loads Laboratory (FLL) at Armstrong Flight Research Center found a way to reduce the sheer volume of wiring and piping using a series of hydraulic carts that could each run multiple servo valves to multiple actuators independently, with just a single connection to the control room. The high bay where the team carries out testing also has a network of hydraulic piping beneath the floor, which the carts easily connect to wherever they are needed.

The problem that test engineers at Armstrong—then Dryden Flight Research Center—faced in the mid-2000s was maintaining and using an inefficient and outdated hydraulic system.

“Our old system was completely analog, very bulky, and not user friendly,” says David Neufeld, the structural test systems specialist at the lab, noting that settings were changed with knobs and a screwdriver. “Each of the 48 channels had a cable bundle with hefty, multi-pin connectors running from the control room on the second floor to a panel in the corner of the high bay, and from there another section of cable ran to the test structure. All the bundles were semi-permanently installed. This made the system very inflexible and a mess to set up and tear down,” he says.

“We wanted a mobile cart system with as few cables as possible. Our goal was to upgrade to a state-of-the-art digital system with the most flexibility our money could buy.” The structural test team drew up specifications for a modular hydraulic control system and began seeking feedback from companies that could design and integrate it.

In 2006 the contract to build the FLL’s next-generation hydraulic controller system ended up going to Moog Inc., a company that specializes in motion control systems and is headquartered in East Aurora, New York.

The company designed a multi-function mobile cart that not only houses the hydraulics for up to eight actuators but also includes most of the necessary electronics, which were previously housed in the control room. Each cart—known as a SmartCART—connects to the Real-Time Front-End (RTFE) computer Moog also built, which sits out of the way in the test area and can connect to up to 48 SmartCARTs. The servo valves and load-cell wires run from up to eight actuators to each cart, with just two wires—an Ethernet cable and a safety circuit cable—between each cart and the front-end computer. The RTFE is then wired to the command computer with a single Ethernet cable.

The lab ended up purchasing 10 carts and an RTFE, all of which it now relies on for its day-to-day operations. Engineers pull out only the carts required for the tests; the rest are stored away.

The setup is ideal for the FLL, which runs relatively short-term tests on a wide variety of aircraft and spacecraft, often testing multiple vehicles at once, says Art Benedict, aerospace test sales manager at Moog. “They don’t have to change anything between tests—they just roll the carts around.”

Neufeld says the facility can test everything from business jets to military aircraft, wing sections, and re-entry decelerators. An inert gas chamber with hundreds of heating elements, capable of achieving and controlling temperatures up to 3,000 °F on a full-sized prototype while applying hydraulic loading forces with the Moog system, allows the laboratory to simulate all stages of reentry and hypersonic flight.

Benedict estimates the carts, which are now commercially available for any hydraulic structural testing facility, saved $350,000 in wiring costs compared to the previous system by reducing the cable quantity and associated infrastructure costs.

But Neufeld says the benefits go beyond wiring costs and even eliminating the annoyance, tripping hazard, and space constraints presented by a web of heavy cables and connectors. “For us, I’d say the main advantage is flexibility—the ease of setup and tear-down and minimal infrastructure to get a test laid out and installed,” he says, adding that this is also probably where the most money and time is saved. “In a day or two, we can put a typical load test together, as far as the mechanical setup.”

And in the event of a cart failure, units can be swapped out and testing resumed in about an hour, he says, while a failed servo valve can be replaced in 10 minutes.

Benedict says Moog had nothing like the SmartCART before its work with NASA, and no one else seems to have come up with anything like it since. So far, the company’s found one commercial customer, a major helicopter manufacturer that purchased 10 units for a new testing facility. But this was no small sale, as the carts run around $250,000 apiece.

He says the price, partly a result of low-volume production, may be a barrier to some, and those who already have a facility wired may not see enough benefit to scrap their entire testing system. Meanwhile, facilities that do long-term lifetime fatigue tests may have less need to rapidly alter their setup. And the product’s uniqueness makes it impossible for a potential Government customer to put such a purchase out for competitive bid.

“The benefit would be mostly to people who want to be flexible in how they set this up and people who don’t have an existing lab,” Benedict says.

As old labs age and new ones are built, he says, the carts could catch on as a new model for hydraulic test facilities, which would also bring the price down.

“We’re quite happy with the system, and I know NASA’s happy with it,” Benedict says. “I’d say we may see more of this in the future.”

Abstract
Aircraft hydraulic testing facilities can be jungles of hoses, wires, and pipes. When replacing its hydraulic system, the Flight Loads Laboratory at Armstrong Flight Research Center significantly reduced the miles of connections by hiring East Aurora, New York-based Moog Inc. to develop a series of hydraulic carts. Each SmartCART can connect eight hydraulic actuators to a front-end computer with just two connections. The system is especially useful for facilities that have to reconfigure test setups frequently. 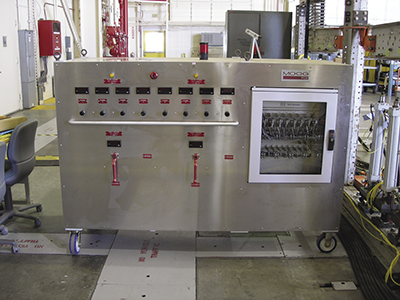 Moog Inc. custom-built a set of 10 hydraulic carts to meet the needs of Armstrong Flight Research Center’s Flight Loads Laboratory, reducing the amount of cables and hoses in the lab, creating a more flexible setup, and bringing test operations into the digital age. The company now offers the carts, along with the accompanying Real-Time Front-End computer, for sale to commercial aircraft testing facilities.

The Flight Loads Laboratory at Armstrong Flight Research Center (formerly Dryden Flight Research Center) tests the strength and endurance of aircraft structures, using hydraulic actuators to apply forces that simulate the stresses of takeoff, flight, and landing. The testing involves many cables, hoses, and wires, which the lab minimized by requesting a fleet of hydraulic carts that can be parked near the aircraft and connect to a front-end computer with just two wires. Two of the carts can be seen to the left rear of the plane above.