After the Phoenix lander settled into the northern polar region of Mars in 2008, its operators discovered that icy soil scraped from the planet’s surface was too sticky to deliver from the probe’s scoop to one of its instruments, forcing them to content themselves with only analyzing dry soil. A little over a year later, near the planet’s equator, the Spirit rover got stuck in a deposit of soft iron sulfate hidden under a layer of normal-looking Martian soil, putting an end to more than five years of roaming.

These and other unexpected difficulties that have confronted rovers and landers on other worlds might be avoided in future missions if engineers building them have more accurate testing environments, including “simulants” imitating the dirt, dust, and rock of a given planet. As a 2012 paper out of NASA’s Marshall Space Flight Center notes, technology sent to other planets and moons “is only as good as the simulants used to test it.”

Unlike the moon, no surface samples from Mars have been returned to Earth. But orbiters have recorded surface compositions across the entire planet, and robotic explorers have carried out deeper investigations at various sites. A major ingredient of much of the Martian surface is basalt, an iron-rich rock typically associated with volcanoes on Earth. So that’s where NASA researchers go to look for appropriate Mars simulants.

In the 1990s, NASA engineers developing terrestrial Mars probes tested them using a mixture known as JSC Mars-1, consisting of particles ejected from Pu’u Nene volcano in Hawaii. But these naturally round particles tended to attract moisture and become clay-like, so in the mid-2000s, NASA started looking elsewhere.

In 2006, Greg Peters of the Jet Propulsion Laboratory’s (JPL) Extraterrestrial Materials Simulation Laboratory found what he was looking for on a mountain in the Mojave Desert of California. Saddleback Mountain isto a basalt quarry, dug into flows about 20 million years old. “I actually grew up in that area, so I knew about that deposit,” Peters says. “My dad worked at the adjacent borax mine.”

Samples were brought back to JPL and examined. “Mineralogically and chemically, it looked like a pretty good match,” Peters says, adding, “Also, this basalt was available in tons, already processed.” The company operating the quarry was crushing the rocks onsite, and the process, more akin to the mechanical weathering process on Mars, produced rougher grains that didn’t attract water and become muddy. The dominant minerals were also those with a large presence in Martian soil—feldspar, pyroxene, olivine, and magnetite.

Mars Mojave Simulant (MMS) was born, and by 2008, JPL had stored up 10 tons of crushed Saddleback Mountain basalt.

When Mark Cusimano and a friend decided to go into business in 2015, both were “passionate space enthusiasts,” he says. As park rangers for the city of Austin, Texas, they had run a park astronomy program together.

They hit on the idea of a kit for gardening on Mars and discovered JSC Mars-1, which by then was being mined and sold to NASA and other customers by the space company Orbitec, but transportation from Hawaii made the simulant prohibitively expensive. It was only after learning of MMS that they founded The Martian Garden. The Austin-based company, where Cusimano is the chief technology officer, successfully completed its Kickstarter campaign in the fall of 2016, selling 50 Martian gardening kits based on the Mars simulant, complete with a desktop greenhouse, seeds, and fertilizer.

But the Mars-like dirt on its own has proven to be an even bigger seller, with customers ordering it in shipments of up to 200 pounds. “People have been very enthusiastic about the bulk material,” Cusimano says.

The interest is not because the dirt is particularly good for gardening but rather because it presents the challenge of growing plants on Mars, where the surface is rich in inorganic nutrients but totally lacking in organic compounds. The company bakes the soil in an autoclave “so it’s as dead as we can make it,” Cusimano says. Fertilizer is a necessity.

In the spring of 2017, the company began offering MMS-2, which incorporates additives to more closely imitate the chemical composition of Mars’ surface, with about 93 percent accuracy. The company is also working on another product—MMS-2+—that will also incorporate perchlorates, volatile chemicals that pose some health hazards but are now known to be pervasive on Mars. Cusimano plans to experiment with growing water hyacinths in the mixture, because they are often used to clean up perchlorates.

The Martian Garden kits currently come with a mix of cabbage, kale, arugula, and dill seeds, mainly because these plants germinate quickly and easily.

The Martian Garden is now the sole commercial provider of Mars simulant. The company that mined basalt on Saddleback Mountain went out of business years ago, and Cusimano’s company struck an agreement with the entity mining borax nearby, which took over the basalt site, allowing The Martian Garden to harvest the material. Orbitec, recently purchased by Sierra Nevada, has stopped selling JSC Mars-1.

“It was good timing on our part,” Cusimano says. “Right as they were leaving the market, we were able to step in.”

The primary markets are elementary through high school teachers and researchers at universities. The former are especially dear to Cusimano, who traces his interest in space back to early childhood. He’s currently working with a teacher and customer to develop a classroom kit and curriculum.

“The more we work with educators, the more we realize that the thing we need the most to get to Mars is an educated and enthusiastic public,” he says. “Instilling that passion in the generation that’s going to go to Mars is a pride point for us.”

Research, however, is still a major interest, and to that end the company is also working to develop an affordable Mars environment chamber that would also recreate the atmosphere, pressure, and temperature of Mars.

NASA may also end up being a customer. Peters notes that since the Saddleback Mountain basalt quarry shut down, the Space Agency no longer has a source for Martian simulant. NASA also continues to look for more accurate Mars soil analogs. After all, the surface varies across the planet. And the Phoenix lander’s scoop instrument was tested with the original MMS and still didn’t perform as expected.

Peters says he was pleasantly surprised to learn how the Martian Garden was selling the simulant he found. “The more people who buy it, they’re either learning about Mars by doing experiments, or you’re getting somebody interested.”

Abstract
In 2006, the Jet Propulsion Laboratory tested dust and rocks from a basalt quarry in the Mojave Desert and found it about 93 percent similar to the surface of Mars. The center now uses the resulting Mars Mojave Simulant (MMS) to test rovers bound for the Red Planet. The Martian Garden, based in Austin, sells kits that use MMS to simulate the challenge of gardening on Mars and is also now the only remaining supplier of Mars surface simulant. 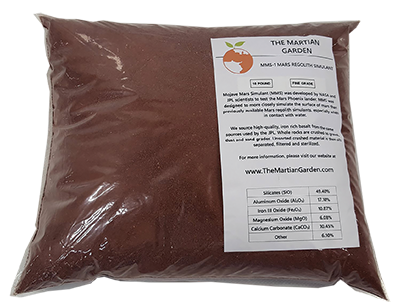 While The Martian Garden sold enough gardening kits to meet its Kickstarter fundraising goal, the company has seen greater success with its individual bags of its Mars surface simulant, a mixture based on JPL testing that found crushed basalt from a quarry in the Mojave Desert to be similar to the surface of the Red Planet. It’s marketed in packages of up to 10 pounds. 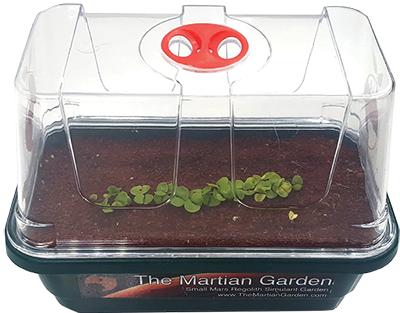 Growing food on the desolate surface of Mars is a challenge NASA plans to take on one day. The Martian Garden lets buyers give it a try, with dirt that the Jet Propulsion Laboratory (JPL) tested and found to be similar to that of the Red Planet.