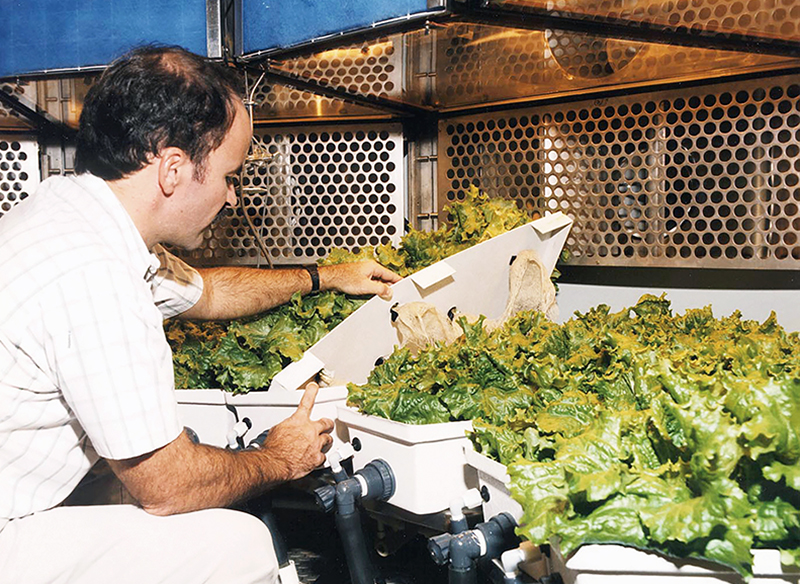 NASA harnesses the power of light for purposes as varied as laser communications, 3D mapping of land surfaces, and spectroscopy to determine the composition of distant stars. The Space Agency has also devoted significant research and development to using the visible spectrum to drive biological processes, and a number of former contractors have made that knowledge available in the commercial marketplace.

The most important light-driven organic process on Earth is photosynthesis, by which plants convert sunlight into chemical energy, driving the entire food chain.

Light also plays a crucial role in biological cycles related to sleeping and waking. In 2001, an advisor to NASA demonstrated the existence of a third type of light receptor in the mammalian eye. In addition to the rods and cones that enable vision, George “Bud” Brainard, Thomas Jefferson University researcher and frequent NASA consultant, showed that another photoreceptor in the retina, now known as the intrinsically photosensitive retinal ganglion cell, is responsible for regulating both pupil constriction and circadian rhythms.

By then, NASA had been experimenting for about a decade with using LED technology to help plants grow. The Agency has also worked with LEDs to help regulate astronauts’ sleep cycles on the International Space Station (ISS), where 16 sunrises and sunsets every 24 hours tend to throw off their internal clocks.

Now, Biological Innovation and Optimization Systems (BIOS) Lighting, a young company in Melbourne, Florida, is leveraging the know-how of two former NASA contractors who helped the Agency pioneer both these LED applications, as the company brings two different product lines to market.

Neil Yorio started working with NASA as a graduate student in 1989, when the Agency’s Life Sciences Support Facility was housed in a converted hangar at Cape Canaveral Air Force Station, adjacent to Kennedy Space Center. There, Yorio and colleagues retrofitted an old pressure chamber from the Gemini missions to create the Biomass Production Chamber for the Controlled Ecological Life Support System (CELSS) project, planned as a test bed to demonstrate and measure the self-regenerating life support system for long-term space exploration missions and even extraterrestrial colonization.

Plants were central to the system. NASA was—and remains—interested in technology for growing plants on long-duration space exploration missions, not just as a food source but also to perform all the roles they carry out on Earth: eliminating carbon dioxide, providing oxygen, purifying water, and processing waste.

At the time, Yorio says, the researchers primarily used high-pressure sodium lamps to provide light, a technology that still dominates indoor agriculture today. After some initial testing at a NASA Research Partnership Center at the University of Wisconsin-Madison, though, the CELSS team started experimenting with LEDs for plant lighting.

It was still a new technology, expensive and not yet efficient. Nonetheless, Yorio says, “there was interest in using them because they’re small, solid-state, lightweight, they had the potential to be energy-efficient, and they had no hazardous materials.” He coauthored some of the first papers published on LED-based grow lights in 1997 and ’98.

When the Space Life Sciences Lab was built next to Kennedy in 2003, he and fellow researchers moved there as part of the Advanced Life Support Program, and he oversaw a number of projects that continued experimenting with LEDs.

The lab is where he met Robert Soler, who Bionetics Corporation hired in 2007 to help finish the first LED module to provide lighting for astronauts on the ISS.

“We’d started seeing some issues with the general luminaire system on the ISS,” says Howard “Bill” Wells, chief engineer at Bionetics. The fluorescent bulbs were frequently failing and had a relatively low light output. “Another problem was that fluorescent lights have mercury and glass, so you have two potential safety hazards you’ve got to deal with.”

One LED replacement went up in 2008 as a demonstration and still helps light the space station’s U.S. National Laboratory.

Not long after, NASA requested an update to replace all the lighting in the U.S. portion of the space station with LED fixtures, this time incorporating the ability to alter their spectra to help manage astronauts’ sleep cycles.

Soler helped write the proposal that won Bionetics the contract to design and build the new LED-based lighting modules for the ISS. By then, both he and Yorio were working for the company Lighting Science, and Soler helped Bionetics build the modules as a part-time consultant.

The resulting lights have three modes of operation: general task lighting, a pre-sleep mode, and a wake-up mode. The wake-up mode imitates broad daylight, suppressing melatonin in the brain to increase alertness. “Melatonin is basically the night-night drug your body uses to sleep,” Wells says. Pre-sleep mode, on the other hand, eliminates blue-green wavelengths to allow melatonin release.

The lighting in all three modes also needed to be energy- efficient, render true colors—meaning it wouldn’t cast its own hue—and be pleasing to the eye, avoiding any harshness. “To bring all those things together, that’s kind of what my area of expertise is,” Soler says.

All the while, LEDs have been catching on for more and more applications. “We’ve had the benefit of capitalizing on technological development on the part of a lot of companies, to the point that the consumer market was driving that technology,” Yorio says. This has meant ever-increasing efficiency at lower and lower costs.

LEDs have finally advanced to the point that they can match or surpass the performance of, for example, high-pressure sodium lamps in agricultural applications. “Now we find ourselves with the opportunity to replace high-energy-consuming, hazardous-waste-containing products with more efficient and sustainable alternatives.”

Yorio, Soler, and a handful of others left Lighting Science in 2014 to create BIOS, where they’ve continued to develop LED technology and adapt it to human and agricultural biology.

Photosynthesis requires light in roughly the same wavelengths that enable vision—about 400 to 700 nanometers. But most lamps for indoor agriculture emit radiation well beyond this spectrum, especially in the form of heat. LEDs, on the other hand, produce light only within a narrow spectrum determined by the material they’re made of. Most of the energy put into an LED, therefore, can be used to produce what’s known as photosynthetically active radiation (PAR)—the light that plants use.

“By eliminating photons that aren’t included in PAR, you’re able to reduce power and heat and still exceed the performance of high-pressure sodium lamps,” Yorio says.

Wells points out that by reducing heat, LEDs also reduce the need for air conditioning, further saving energy. And they far outlast alternatives. So despite a higher initial cost, he says, they save money in the long run.

LED-based grow lights cost about $1,000 less over five years than comparable high-pressure sodium lamps, which have to be replaced around every six months, Yorio estimates.

He notes that LEDs are also much safer than all other electric lighting alternatives.

As its first products became available in early 2015, BIOS found that the biggest agricultural market was in the cannabis farming industry that is gradually becoming legalized. An emerging movement to put food production closer to end consumers is also contributing to the demand for grow lights, Yorio says. “There’s a very strong movement for indoor farming.”

In human lighting, Soler says, the lighting industry has focused on deep blue frequencies to induce alertness. More recent research, however, he says, shows that light on the edge of blue and green is most effective at inducing both melatonin suppression and pupil constriction, and traditional LEDs have relatively low output in that range. Further research is showing that the deep blue frequencies commonly used in the industry may cause oxidative stress in the eye.

BIOS’s SkyBlue lighting technology shifts peak outputs accordingly while producing true colors in a spectrum that closely imitates daylight, Soler says. “What BIOS does is use LEDs to pinpoint peak sensitivity and infuse that into the traditional white-light LED.”

In a world where most people spend most of the day indoors with little exposure to melatonin-suppressing sunlight, the disoriented circadian rhythm is a common problem, which BIOS aims to address, Soler says.

The company isn’t making its own human lighting products but is currently partnering with two other companies to put its technology in their products: Ledra Lighting specializes in small-scale decorative and recessed lighting for the home, while Pinnacle Architectural Lighting targets environments like offices, retail spaces, and hotel lobbies.

The technology has already made its way into the Pittsburgh Pirates’ clubhouse and bullpen.

“There’s a lot of interest in doing exactly what we’re doing, but we’re the first ones doing it,” Soler says.

BIOS has released two of its own agricultural lighting models. One is a high-output fixture designed for vertical agriculture, where plants grow on stacked shelves. It surpasses the photosynthetically active output of a 1,000-watt high-pressure sodium lamp using just 40 to 50 percent of the energy, and it spreads light uniformly across a specific area so it can hang close to the plants. The other model is designed to supplement sunlight in a greenhouse.

Both are informed by Yorio’s long experience with indoor farming at Kennedy during the time when NASA was making the switch to LED lighting. “Neil was there when all this was happening, but I think his real experience is in understanding plant lighting and horticulture, and really understanding plants as a whole and how to grow them,” says Ray Wheeler, who headed—and still heads—Advanced Life Support.

Soler’s work for NASA, meanwhile, provided him with a test bed for his technology and also stretched its limitations. The project required the LEDs to give off exactly the same colors of light from one module to the next and regardless of the angle from which they were viewed. Some of the techniques he developed to meet those specifications have helped him keep BIOS’s lighting uniform, “so you can’t tell one light from another, which is surprisingly hard to do,” he says.

As the company’s first products hit the market, the LED modules Soler helped design to support astronauts’ sleep cycles finally began making their way to the ISS, where they are gradually replacing the original fluorescent lighting. He says he’s interested to see the performance results.

“There’s a lot of stuff we’ll learn through what’s going on at NASA,” Soler says. “Those findings will definitely inform the next-generation LED lights. NASA is still going to be a conduit for a lot of that science.”

Abstract
Two former Kennedy Space Center contractors are using expertise gained from NASA work in LED lighting to benefit agriculture and human health. The two engineers are now vice presidents at BIOS Lighting, based in Melbourne, Florida. The company produces agricultural LED lighting that maximizes efficiency by emitting light only in the wavelengths that drive photosynthesis, as well as human lighting with peak output in wavelengths in the blue-green region, which suppresses melatonin production, inducing wakefulness. 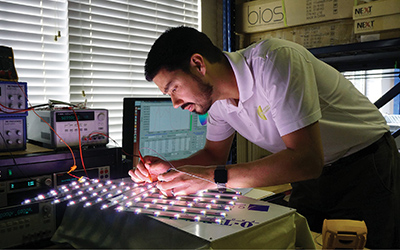 Robert Soler, vice president of human biological technologies and research at BIOS Lighting, works on an LED lighting array in his lab. Soler helped design LED lighting modules for the ISS as a NASA contractor. 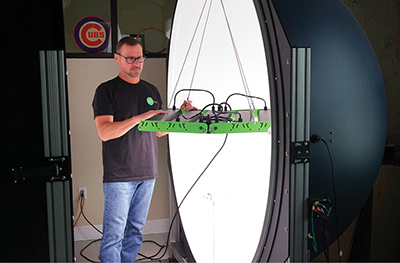 Neil Yorio, vice president of lighting research for agriculture at BIOS Lighting, prepares to test one of the company’s Icarus LED grow lights in a light chamber. Yorio started using LED lighting for agriculture as a NASA contractor in the 1990s. 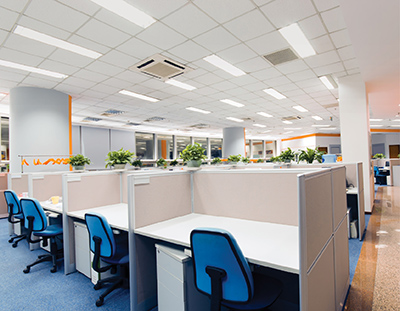 Ray Wheeler, who still heads NASA’s Advanced Life Support Program today, checks on hydroponically grown lettuce in the Life Sciences Support Facility’s Biomass Production Chamber in the early 1990s. His team, including Neil Yorio, now vice president for lighting research for agriculture at Biological Innovation and Optimization Systems (BIOS) Lighting, became some of the first researchers to investigate the use of LED lighting for plant growth.