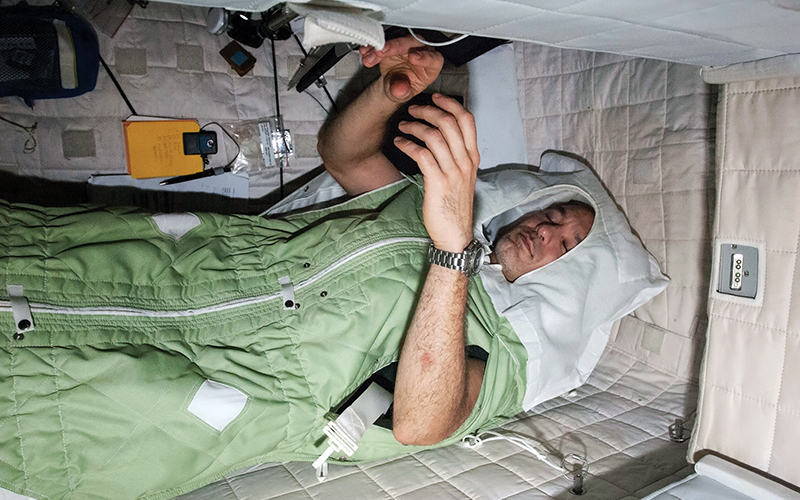 Lack of sleep could be costing the U.S. economy around $411 billion a year, according to a 2016 estimate by the RAND Corporation. That same year, a National Sleep Foundation survey found that 3 percent of American adults—amounting to more than 7 million drivers—had dozed off behind the wheel during the two weeks before the survey.

Many factors contribute to sleeplessness, but researchers are finding that a major one is light exposure—and not just the amount of light we’re exposed to, but the color of the light.

Fares Siddiqui was surprised when an acquaintance mentioned this to him in late 2015. The recent mechanical engineering graduate was looking for a product to design and bring to market, and he immediately jumped online to do some research. One of the first items he found was a 2007 study demonstrating that, in addition to image-forming rods and cones, the human eye has a third type of photoreceptor that influences circadian rhythms, now known as the intrinsically photosensitive retinal ganglion cell.

This particular study showed that even in blind subjects, exposure to short-wavelength blue light suppressed melatonin, causing alertness, while light at the longer wavelengths where visual sensitivity peaks did not. These blue wavelengths are abundant in daylight, and their suppression of melatonin causes a reset of the circadian rhythm that governs sleep and wakefulness.

The study was funded in part by the National Space Biomedical Research Institute (NSBRI), which is funded in turn by NASA’s Johnson Space Center.

Researchers had had some idea about all this for some time. In 1990, before the NSBRI existed, NASA reached out to Charles Czeisler, then an associate professor at Harvard Medical School and a specialist in circadian rhythms, who had just demonstrated the ability to reset the circadian clocks of night-shift workers by systematically exposing them to light.

At the time, astronauts preparing for a nighttime Shuttle launch that kept getting postponed were having a hard time adjusting to their inverted schedule. Czeisler repeated his experiment on the crew with success. He would later serve for a decade as team leader of the NSBRI’s Human Performance Factors, Sleep, and Chronobiology Team.

Since around 2000, the NASA-funded institute has collaborated with Harvard Medical School, Brigham and Women’s Hospital, Thomas Jefferson University, and others in numerous studies to advance understanding of light’s influence on circadian rhythms, culminating in the delivery of tunable LED lighting modules to the International Space Station (ISS) in late 2016. NASA has a keen interest in the subject because sleep is problematic for astronauts on the ISS, which sees 15 or 16 sunrises and sunsets every 24 hours, and no space travelers experience the normal 24-hour Earth day (although astronauts on Mars would come close).

All of this gave Siddiqui confidence that a product could be based on the research. “Once we realized this was validated and something NASA uses, we thought we really should look into this in more depth,” he says.

Based on the research, Siddiqui knew when he founded Circadia, based in London and San Francisco, that his product would need a tunable LED lamp akin to the ones going to the space station. But he wanted to take the concept a step further, basing light exposure on individual sleeping patterns and on each user’s responses to light exposure, in a sort of biofeedback loop. “Every human’s exposure to light has a somewhat different effect on sleep,” he explains.

To determine sleep patterns, he settled on contactless radar-based technology to create a device that mounts on the wall or ceiling in the vicinity of the user’s bed and can detect the rise and fall of a sleeper’s chest, as well as the intensity of movement during sleep, from up to eight feet away. With the help of Circadia’s proprietary machine-learning algorithms, the sleep tracker can use this data to determine with 92 percent accuracy what stage of sleep the user is in.

Sleep-stage data is in turn fed into a smartphone app based on software that Harvard Medical School and Brigham and Women’s Hospital created in part with funding both directly from NASA and from the NSBRI. The app provides the link between the sleep tracker and a portable light therapy device that sits on a desk to provide what Siddiqui calls “visual caffeine” throughout the day.

This is primarily light in the short, blue wavelengths that retinal ganglion cells respond to by suppressing melatonin production. The idea is to induce wakefulness during the day to promote sleepiness at night. Then, in the hours before bedtime, longer-wavelength reddish light simulates late evening light and stops preventing the hormone’s production.

What sets Circadia’s system apart from any other light therapy or sleep tracker it that it combines diagnostics and treatment in one complete, closed-loop system. The app links the sleep tracking and light therapy devices, calculating and adjusting the wavelengths, intensities, and durations of light exposure throughout the day based on nighttime sleep patterns. “It’s circadian lighting based on biofeedback from sleep,” Siddiqui says. “It’s unique in that it connects both lighting science and sleep science together.”

The sleep tracker also takes into account environmental factors that can affect quality of sleep, such as temperature, humidity, and light.

Circadia took its product to Kickstarter in June of 2017, accepting orders for the paired sleep tracker and light therapy device, although Siddiqui says the devices will also be offered separately in the future. Those orders are scheduled to ship in early 2018.

“We live in an era of artificial darkness,” Siddiqui says, noting that most people in modern societies spend little time outdoors. Meanwhile, while the blue light of computer and smartphone screens isn’t a sufficient replacement for sunlight during the day, it’s enough to impede sleepiness in the hours before bedtime, when many people are scrolling through social media on their phones. “Always being able to reach out to our friends and family is harming us in a way,” he says.

Siddiqui also laments the common attitude that “sleep is for the weak,” he says, noting that lack of sleep not only results in short-term effects like stress, loss of concentration and short-term memory, and decreased productivity, but is also correlated with long-term health problems such as type 2 diabetes, obesity, and cancer.

He notes that, in addition to helping users to maintain a steady, healthy sleep cycle, Circadia’s system can also retrain circadian rhythms—much as Czeisler did for the Space Shuttle crew almost three decades ago—whether that’s to adjust to shift work, get to bed earlier, or overcome jet lag.

Through adjustments to light therapy informed by the sleep tracker, it also aims to improve users’ quality of sleep and work.

“Our goal is to help improve people’s quality of life,” Siddiqui says. “We believe the only way we live life to the fullest is with a good night’s sleep.”

Abstract
Since around 2000, the Johnson Space Center-funded National Space Biomedical Research Institute (NSBRI) has supported research on the use of blue light wavelengths to regulate circadian rhythms. Based on this research, London- and San Francisco-based Circadia developed a light therapy system to train the user’s sleep cycle. A cell phone app based on software partially funded by the NSBRI uses data from a sleep tracker to program each day’s light therapy, via a portable lighting device, inducing daytime wakefulness to facilitate nighttime sleepiness. 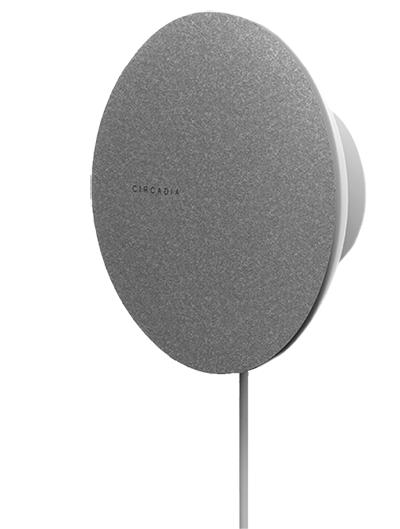 The Circadia sleep sensor mounts on a wall near the user’s bed and uses radar to monitor sleep stages based on breathing and intensity of movement. That data is fed into a smartphone app based on software developed in part with NASA funding, which determines daytime light therapy. 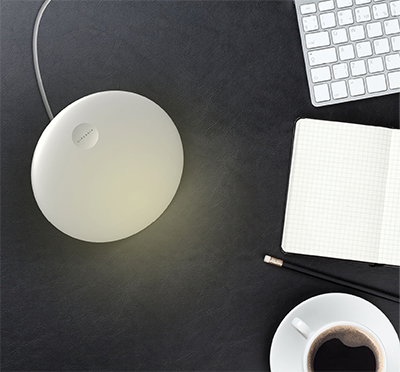 A tunable LED lamp, the portable Circadia light therapy device provides alertness-inducing short-wavelength light for much of the day, followed by redder light toward bedtime. Precise times and wavelengths are based on the user’s sleep patterns.

Maintaining a regular sleep schedule is difficult for astronauts, who don’t experience 24-hour daylight cycles, so the NASA-funded National Space Biomedical Research Institute has collaborated on several groundbreaking studies to understand how artificial light can be used to retrain circadian rhythms.