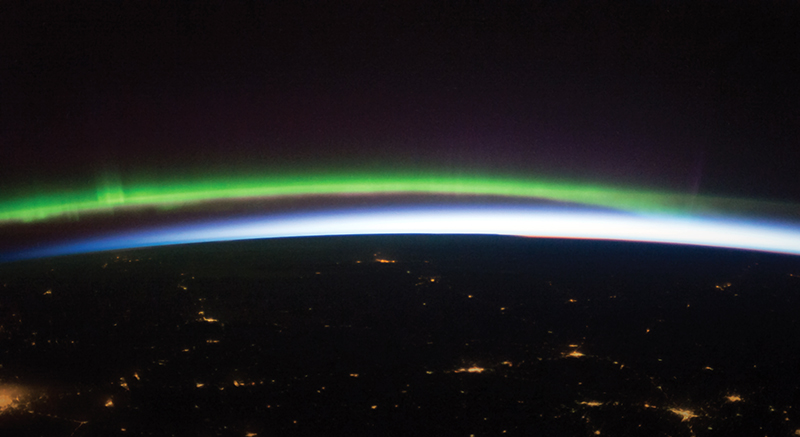 When paramedics come racing into a home, the last thing anybody is worrying about is where the ambulance was earlier that morning. But traces of those earlier calls could be lingering on the equipment, bags, or even the uniforms the EMTs are wearing—and they could be spreading disease. An innovative new product, designed with NASA’s help, aims to sterilize the rig and gear to make it safer for the patients and the paramedics.

The product uses atomic oxygen and oxidation, two things NASA is familiar with, explains Sharon Miller. “I work in space environment testing here at Glenn Research Center, and primarily what I do is look at how materials on spacecraft react when they’re in the environment of upper atmospheres of planetary bodies and in space.”

In stable form, oxygen, which is in the air that we breathe, is made up of two oxygen atoms bonded together as a pair. In contrast, atomic oxygen is a single O atom, which means “it is not stable and wants to react with anything that it comes in contact with to make a stable chemical compound. Carbon on a surface, for example, is easily oxidizable,” Miller says. The atom is essentially looking for something to pair with, and it will react with anything it can to get there.

At altitudes above Earth’s breathable atmosphere, atomic oxygen is far more prevalent than here on the ground and can become a destructive problem. For example, Miller recalls, the original design of the solar array blanket to power the International Space Station called for it to be constructed of a lightweight polymer material that broke down when exposed to atomic oxygen to make carbon dioxide and carbon monoxide gas.

“We were able to show that the solar array blankets weren’t going to last for longer than half a year on orbit,” she says. “We were able to come up with a coating that would protect them from the attack by atomic oxygen. And they’ve been up there more than 15 years now.”

The coating protected the polymer because it was made out of silicon dioxide, basically vapor-deposited glass, Miller explains. In silicon dioxide, oxygen atoms are all already bonded to other atoms, which means the atomic oxygen had nothing to react with: “it provides a barrier.”

Here on Earth, however, the destructive properties of atomic oxygen can be harnessed for a very positive outcome: sterilization. “Atomic oxygen removes any hydrocarbon from a surface,” Miller explains; typically, the infectious material left on surfaces consists of things like cells and cell wall material that are full of carbon. “Even dead cells react with atomic oxygen,” she says.

That makes atomic oxygen an extremely effective sterilizing agent, which is just how it is used to disinfect ambulances.

Jason Thompson started working as a paramedic more than 20 years ago, but he didn’t start thinking about disinfecting ambulances until 2014. Like every emergency medical responder, he knew and followed “universal precautions,” Thompson says, but that only included “using good hand hygiene: wash your hands, always make sure you wear your gloves.”

Unfortunately, there was no accompanying protocol for cleaning the ambulance or medical equipment after a call. “We weren’t looking at our gear or ourselves as being vehicles or hosts for disease,” Thompson explains. “Even in training, we didn’t talk about decontamination and disinfection, because it’s not something a paramedic can treat.”

But in 2014, the Ebola epidemic was at its height, and medical personnel, including first responders, were among the most vulnerable to infection, bringing the question of infectious disease exposure to the forefront.

Thompson, who by then was working for a Kent, Ohio-based company called Emergency Products + Research (EP+R), said he and his colleagues quickly realized that Ebola was only the tip of the iceberg, and they came to the conclusion that there needed to be a fast and inexpensive way to sterilize an ambulance and everything in it.

Systems already existed to sterilize hospital operating rooms, but they cost upwards of $50,000. Plus, running those systems took hours from start to finish. Emergency medical services (EMS) departments didn’t have that kind of money or time.

EP+R wanted something that was inexpensive and fast and left no residue—since wiping takes extra time and, if an unsterile cloth is used, could risk recontaminating the entire surface.

By 2015, EP+R had decided on a machine that sprayed out the sterilizing chemical in a mist or fog, but the team had many questions—what was the best chemical agent to use? would the fog interfere with the electronics on the ambulance?—and didn’t know where to find the answers.

Enter NASA. Through the Regional Economic Development Program, field centers offer a limited amount of consulting with a NASA subject matter expert for just this purpose. “If we can help a company make a better product or create new jobs, improve on a process they need help with, those are all part of the goal,” explains Laurel Stauber, senior program specialist at Glenn’s office of Technology Incubation and Innovation.

Stauber paired EP+R with Miller, and Thompson says the advice made all the difference. “It was a key turning point. We were ready to walk away—really frustrated.”

Miller says the team wasn’t as far from a solution as they thought. “They had a pretty good idea of what they wanted to do, but technically they couldn’t figure out how to get from where they were to the end product,” she recalls.

She helped them set up a testing protocol to see what impact, if any, the sterilizing process had on the sensitive electrical equipment on the ambulance and helped them find scientific literature that would answer their questions.

“The testing was pretty much similar to what we do in simulations, only it’s a ground application,” so it was a natural fit for her to guide them, she says.

Among other things, Miller helped EP+R realize that the electrostatic fogger they were considering was potentially a risk for the electronics on the ambulance. She provided advice that helped them to move in another direction.

Both work against organic contaminants because they are strong oxidizers—which means they easily break down into their component elements and give off an “oxygen radical” or single oxygen atom that looks to react with other atoms to form a more stable oxide. “Microbes are made up of carbon, so their chemical structure is attacked by the oxygen atoms and their cells are converted with time to harmless vapor byproducts,” like carbon dioxide and water vapor, explains Miller.

The chemical reactions take just minutes, Thompson says. To get a full clean, however, there are a few more steps: “we recommend EMTs open the drawers, the doors, their oxygen bags, and their supply bags and hang them from the horizontal rail.” That means the fog will be able to hit everything. And if the engine and air conditioning are running, it will also clean the vents and ducts.

“All you need to do is a five-minute cleanup—strip linen, throw away any visible trash, spot clean any visible matter—and run the fogger for 22 minutes. Let it sit for 15 minutes with the doors shut, and let it air out another 10 minutes,” he says: under an hour from start to finish to destroy “pretty close to 99 percent of the organisms in that space.”

The units are small—everything fits into a single backpack—and cost just $2,195 for a starter set, which includes a first case of the disinfectant fluid. Refills cost around $250 per case and provide enough for 24 to 30 treatments, depending on the size of the ambulance.

The first order came from a county in southern Texas after officials read an article in EMS World. “They sent in a blank purchase order—they didn’t know how much it would cost, but they wanted in,” says Thompson. Since then, EP+R has fulfilled orders with EMS groups in Ohio, Florida, Georgia, New York, and Canada.

To his surprise, the units are also being used beyond ambulances: in a school in Ohio, as well as in police cars and jail cells. And the interest continues to grow.

“Now we’re getting courted by an international aid group for Liberia and Sierra Leone,” two of the countries hardest hit by the 2014 Ebola epidemic, Thompson says. “I’m really hopeful. Talk about making a difference around the world.”

Abstract
When paramedics come racing, the last thing anybody worries about is where the ambulance was earlier that morning. But traces of those earlier calls could be lingering—and they could be spreading disease. With help from the Regional Economic Development Program at Glenn Research Center, Kent, Ohio-based Emergency Products + Research designed a device that sterilizes the rig and gear to make it safer for the patients and the paramedics. It’s already being adopted across the country. 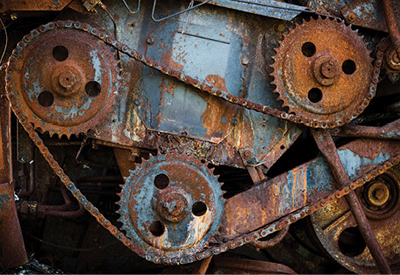 The same oxidation process that kills microbes also causes metal to rust. One of the challenges the NASA consulting helped EP+R overcome was to ensure the sterilizing mist wouldn’t rust or otherwise harm the ambulance engine or any of the delicate electronics on board. 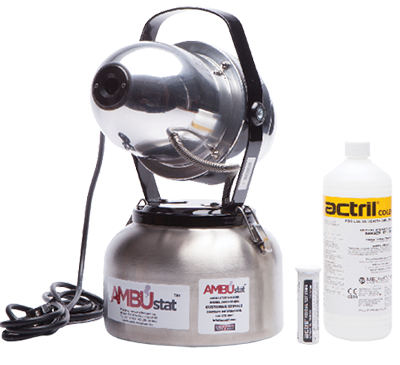 Emergency Products + Research consulted with NASA to determine the best way to deliver atomic oxygen in a device to sterilize ambulance interiors. This small, inexpensive device creates a mist that can kill close to 99 percent of microorganisms in less than an hour. 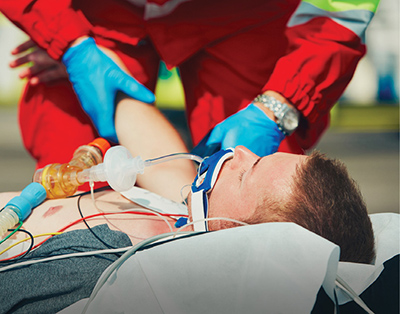 Paramedics wear gloves to ensure their hands don’t spread germs, but the rest of the equipment, from oxygen tubes to gurneys to the medic’s uniform, could all carry traces of previous calls. EP+R’s device sterilizes everything, making it safer for both patient and medics. An international aid group has already expressed interest.

The oxygen we breathe consists of stable, paired oxygen atoms. But high up in the atmosphere, single oxygen atoms, or atomic oxygen, seen here as green, are more prevalent and can become a destructive problem for spacecraft.