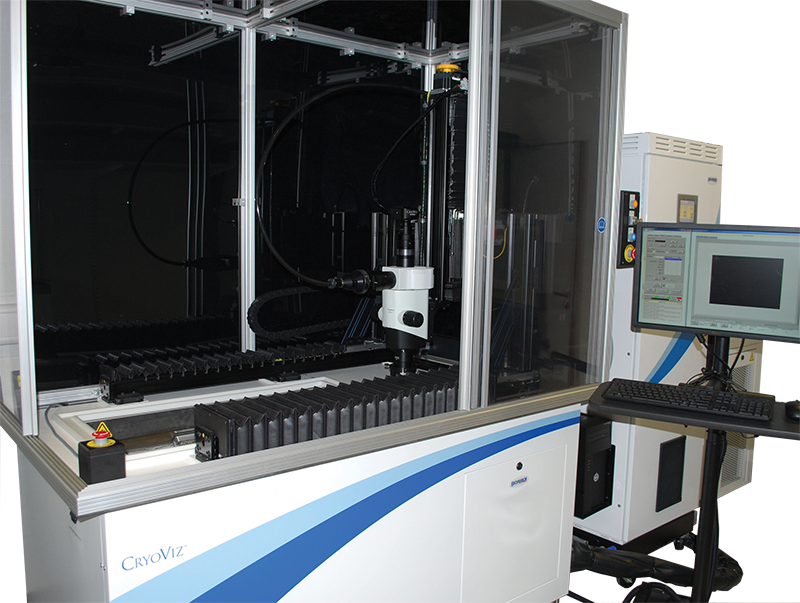 After earning his doctorate, Debashish Roy set about creating a business from the biological imaging device he’d helped invent as a graduate student. The system held promise for cancer and stem cell research, among other possible applications. But he soon realized he could use some help.

“In the first-generation system, we weren’t sure if it was the best possible configuration or how to verify the components and get the best performance,” he recalls. The task of selecting and configuring optical and robotic parts required a high level of expertise. “We didn’t have a lab to try out all the possible scenarios. We didn’t even have the equipment we needed.”

NASA’s Glenn Research Center, located just on the other side of Cleveland from Roy’s fledgling business, however, had that lab, equipment, and expertise.

Electro-optical engineer Michael Lewis had recently taken charge of the optics lab for Glenn’s Research and Engineering Directorate when he first met Roy in 2012.

“We’ve mainly been dealing with diagnostic imaging systems for combustion and fluid physics that are usually flown on the space station,” Lewis says, adding that optical communications, custom sensors, and light-based metabolic analysis have also been high on the lab’s priorities for supporting NASA missions. The facility is full of optical tables, cameras and other imaging systems, laser illumination systems, spectrometers, and loads of electronics equipment.

“I’m in love with his lab—he’s got the coolest toys,” Roy says.

The system Roy had developed was what he called an imaging cryomicrotome, a device that could take a frozen block containing a biological sample—typically a mouse—and repeatedly slice off extremely thin sections while taking multiple high-resolution images of the block face to capture any cells tagged with a fluorescent marker, ultimately reconstructing a digital three-dimensional version of the specimen with locations and counts of all the fluorescent cells within the specimen.

The goal is to track the movement of particular cells, especially cancer and stem cells, through a lab mouse’s body. “If I want stem cells to do cardiac repair, are my stem cells going to the heart?” Roy asks. “Are micrometastases going to other parts of the body and starting new tumors?”

To answer these questions, researchers tag cells grown in petri dishes with fluorescent labels and inject them into a mouse. At some point, the mouse is frozen to preserve cellular structure, and Roy’s device turns it into thin-sliced cold cuts while taking thousands of images at cellular resolution.

The machine can be programmed to do all this with no assistance from the user.

By 2012, Roy’s startup, BioInVision, had made its CryoViz device commercially available but hadn’t yet made any sales. In addition to optimizing his existing system, Roy wanted to develop a smaller, cheaper version, and it was with this desktop version in mind that he applied to participate in Glenn’s first round of the Adopt a City Program.

Adopt a City, one of the programs under NASA’s Regional Economic Development initiative, grew out of the White House’s Strong Cities, Strong Communities initiative, announced in 2011, which sought to partner Federal agencies with local businesses and governments. Under Adopt a City, Glenn joined forces with Cleveland, Cuyahoga County, and the Manufacturing Advocacy and Growth Network and selected small and mid-sized manufacturers to receive 40 free hours of technical expertise from its specialists to resolve specific technical challenges that, if solved quickly, could result in a significant payoff for the company. In the case of BioInVision, that specialist was Lewis.

“I was unfamiliar with the microtome initially,” says Lewis, but once he knew what the device was and what Roy was trying to achieve with it, it wasn’t difficult to come up with some ideas. “In its basic form, a microtome is high-resolution imaging, and we certainly have the cameras and the optics in the lab to do that,” he says.

Since the idea was to create a smaller, cheaper version that wouldn’t require quite the performance level of the original, Lewis says, “I took the approach of trying to utilize existing commercial components put together in a way that would optimize the system.”

For example, the imager has to pick up on dim signals without being overwhelmed by bright ones, Roy says, so choosing the right sensors, lenses, and other optical components is crucial, especially to achieve a size reduction.

“He looked at that as a really nice way to keep the cost of the system down but still give him a higher level of performance than he was expecting,” Lewis recalls.

While Roy and his team are still working through mechanical issues with the desktop version, they started applying Lewis’ optimized optics designs to their original product almost immediately.

The updated CryoViz is more sensitive, more efficient, and cheaper to make than the original design, Roy says. “[Lewis] knew his stuff.”

Using Lewis’ designs, BioInVision was also able to eliminate a component, which reduced manufacturing time and cut out a possible point of failure, as well as a vendor.

Anne Richie, the company’s vice president of administration and finance, says the assist from Glenn saved BioInVision development money up front, as well as the potential costs of any design errors and the cost of moving forward with a more expensive product. “As a start-up, you can make a lot of mistakes and lose a lot of money. For a smaller company, it can really hinder your process,” she says.

Instead, the money saved was invested in speeding up development.

“It was the right expertise, and it was available locally, and that really accelerated the process,” she adds, noting that this helped the company stay at the forefront of its field. “In a tech company, time is never your friend.”

Now with eight employees, BioInVision has clients across the United States and in Canada, Europe, and Asia. The company offers both a product and a service: a larger, busier lab might purchase a CryoViz device, while a smaller one might send in specimens for the company to analyze on its behalf.

“Our service side is pretty strong in the United States,” Roy says.

He notes that Case Center for Imaging Research of Cleveland in University Hospitals has purchased a device, opening up research possibilities in area institutes like the Cleveland Clinic and Case Western Reserve University.

The company was also chosen as a partner in the European Union’s MERLIN Project, which aims to develop stem cell-based therapies for liver disease.

Roy says BioInVision has found the most traction in stem cell research. Stem cells can morph into different cell types, giving them the potential to treat or prevent a variety of conditions. But scientists still have a limited understanding of how and why a stem cell becomes a nerve cell or a muscle cell, for example, or how it travels through the body. While the academic community might use the CryoViz system for basic research to advance this understanding, drug companies are using it in attempt to create new therapeutic products. Cancer researchers, meanwhile, use it to track the behavior of cancer cells.

Other medical imaging techniques, such as MRI or CT scans, don’t offer the kind of resolution that can track individual cells through the body.

Roy says he aims to make the smaller, more affordable version of the CryoViz available in the near future, increasing smaller labs’ access to the technology. In the longer term, he hopes the research it enables will lead to new stem cell therapies and breakthroughs in the search for a cure for cancer. With further development and regulatory approvals, it could also be used in hospitals for clinical procedures like biopsies, he says.

“Any of these would be of immediate importance in solving problems with human health,” Roy says.

Abstract
Under the Adopt a City program, Cleveland-based BioInVision was selected for 40 hours of free technical expertise from Glenn Research Center, aimed at developing a smaller version of its CryoViz imaging system. The device maps the location of fluorescent-tagged cancer or stem cells in a specimen, usually a mouse, for medical research. The desktop version is still in the works, but advice on a cheaper, more efficient, more sensitive optical system was immediately incorporated into the original imager. 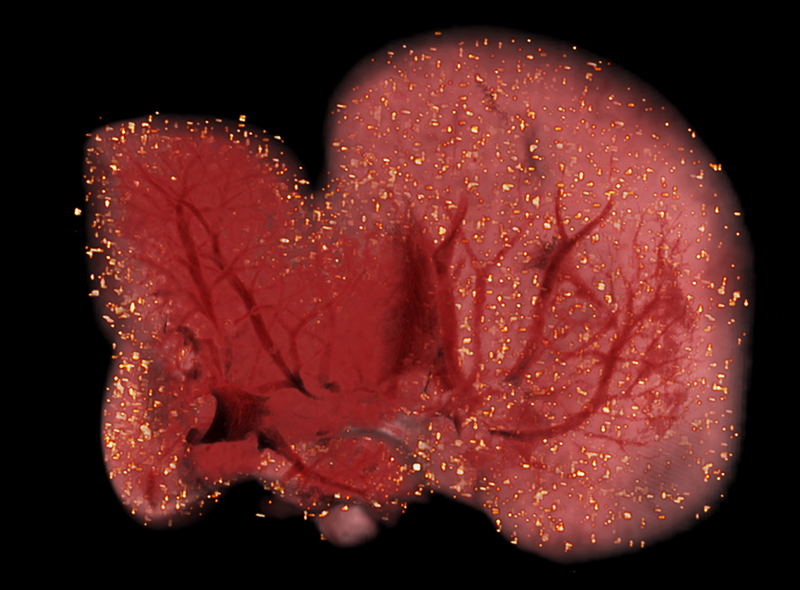 A CryoViz image shows stem cells tagged with fluorescent markers in a mouse liver. After a specimen, usually a mouse, is frozen in a block, the device shaves thin slices off the block, taking multiple high-resolution images of the block face to create a three-dimensional image showing the location of every tagged cell within the body.

Help from an electro-optical engineer at Glenn Research Center let the BioInVision company make its CryoViz imaging device more sensitive, more efficient, and cheaper to manufacture. The optimized optics design will also figure into a smaller desktop version the company is working on.