NASA astronaut Shannon Lucid spent hundreds of hours exercising during her 188-day stay on the Russian space station Mir in 1996. Although it was her least favorite part of living on Mir (“It was just downright hard,” she wrote later), toward the end of her mission she felt she needed even more than the daily Russian protocols she was following. She started running extra kilometers, attached to one of the station’s two treadmills with bungee cords.

At the time, it was normal for astronauts to be carried off spacecraft after lengthy stays in microgravity, due to loss of muscle and bone density. Lucid’s goal was to walk off the Space Shuttle on her own two feet when she touched back down to Earth after the longest stay in space for any woman or American at the time.

When she emerged from the Atlantis Space Shuttle on September 27, 1996, largely unaided, it was a testament to her strict compliance with prescribed exercise routines and her self-diagnosed need for even more. Still, Lucid had lost muscle mass and bone density in space and was a little wobbly. NASA medical officers knew they had to find a better way for astronauts to keep fit on longer missions.

“There wasn’t a good solution at the time,” recalls Roger Billica, who was chief of the Medical Operations Branch at Johnson Space Center from 1991 to 2001.

“We were actively preparing for the International Space Station (ISS), and the NASA-Mir Program was a stepping stone for that partnership,” he says. “It made us aware that muscle loss and bone loss due to prolonged weightlessness was a major problem.”

Mir had a bicycle and two treadmills that required users to wear harnesses that could attach to the exercise devices with elastic cords. But these exercises alone weren’t maintaining the muscles people use to simply stand around on Earth, where we’re constantly working against gravity.

“It was clear that we needed resistive exercise,” Billica says, “something to mimic weightlifting against gravity.” Weights themselves obviously wouldn’t work in space, where they’d just float away. Billica and his team decided to put out a call for countermeasures to address the problem.

That was the call that caught Paul Francis’ attention. The architect-turned-inventor remembers sitting in a Kansas City coffee shop reading a newspaper about Lucid’s return to Earth, the loss of muscle mass and bone density, and Billica’s search for solutions.

Francis had been developing a new type of gym equipment, initially using steel power springs for resistance. He found the metal springs would start breaking at about 10,000 cycles, so he began designing parts with a mostly rubber elastomer that he developed into a spiral torsional spring he named SpiraFlex (Spinoff, 2001).

Francis reached out to Billica and eventually won the competition, after demonstrating SpiraFlex to a roomful of NASA medical officers, researchers, and astronauts. There was no time for delays, as Billica and his team realized if they didn’t decide on a technology quickly, the first crew to live on the ISS wouldn’t have access to the right kind of exercise.

“With NASA funding, we started into a fast-paced development process to take this technology and design a resistive exercise device that would fit NASA’s requirements and be able to be used on the space station,” Francis says.

Francis’ company worked through contracts with Lockheed Martin and Wyle Labs to develop the new NASA device, which became known as the Interim Resistive Exercise Device (IRED). The SpiraFlex core units, or FlexPacks, were stacked inside dual IRED canisters, each with a spiral pulley system that provided linear resistance through the range of cable extension, enabling up to 300 pounds of resistance.

NASA physiologist Michael Rapley worked with Francis on various iterations of IRED at Johnson. “This was the first resistive exercise hardware that anyone had ever built for spaceflight,” he notes. “We learned a tremendous amount—not just about building exercise hardware but also about what type of capability we needed for maintaining muscle and bone in space. We wouldn’t have learned that if it wasn’t for this technology at the time.”

A version of the IRED device was completed in time for Expedition 1, when a three-person crew stayed on the space station from November 2000 to March 2001, the first long-duration stay on the ISS. IRED wasn’t replaced until 2009, when the Advanced Resistive Exercise Device (ARED) was sent up, and the two devices overlapped for about a year. Rapley says that while the current device, ARED, uses different technology, its development owes much to the knowledge gained from working with SpiraFlex.

After working with NASA to build the initial device, Francis was issued additional patents on the technology and licensed it to Nautilus Inc., a fitness device company that incorporated SpiraFlex into its Bowflex Revolution line ofexercise equipment.

NASA continued to improve IRED while it was on the space station. “We spent a number of years adding things to it and tweaking the design,” Rapley says. The NASA team worked with Francis and engineers at Schwinn Fitness—another brand bought by Nautilus—to develop a more reliable and maintainable version of the technology that also greatly improved the number of cycles they could get out of each FlexPack.

Nautilus’ Bowflex Revolution line, meanwhile, has gone on to achieve more than $200 million in sales, according to Francis, who used royalties from that license to develop his own line of SpiraFlex-based fitness equipment, which he sells through his new venture, OYO Fitness.

OYO Fitness’ first product, the DoubleFlex Silver portable gym, which retails for $119, launched in January 2016. The company crowdfunded the production of an upgraded version, the DoubleFlex Black, on Kickstarter, raising over $659,000 from more than 4,200 backers. The DoubleFlex Black, which retails for $165, has more resistance and cable extension, and for $65 more, the Pro version adds integrated sensors and Bluetooth connection to the OYO Coaching app. The company is also working on group exercise and corporate wellness programs.

For the DoubleFlex line, Francis miniaturized SpiraFlex technology again to create a device that weighs only two pounds but produces up to 25 pounds of linear resistance and folds up to fit in a small backpack. Users add 5 or 10 pounds of resistance by snapping on FlexPacks, which, in the case of the DoubleFlex, are wheel-like cartridges that resemble tiny barbell weight plates but contain the torsional SpiraFlex spring instead of weight.

Francis describes the DoubleFlex as the world’s only exercise device that applies resistance to both sides of muscle groups in one motion, enabling balanced bodybuilding in half the time. “Combining strength with movement, without weight or momentum, our portable gym is the new way to get fit anywhere, anytime,” he says.

NASA’s Rapley notes that the technology is the result of a collaborative back-and-forth relationship between the Space Agency and the private sector. “What is great about this story is how both sides continued to benefit from a single idea,” he says. Francis’ idea helped NASA solve one of the initial challenges at the start of the ISS, and collaboration with NASA improved the design for a more reliable technology that he was able to license to Nautilus.

Engineers at Schwinn and Nautilus went on to improve the system further. “Years later, NASA again benefited from this collaboration by working with industry to incorporate those FlexPack design changes back into our IRED design,” Rapley says. “Those changes ultimately reduced the sustainability costs of IRED by improving its reliability and making it more maintainable in space.”

Abstract
Loss of bone density and muscle during long stays in zero gravity posed a dilemma without a clear solution: weights are useless in a weightless environment. Paul Francis was working on exercise equipment based on resistance rather than weight, called SpiraFlex, and answered NASA’s call for ideas. Francis worked with Johnson Space Center to build SpiraFlex FlexPacks into a system with up to 300 pounds of resistance. He’s now founded Kansas City, Missouri-based OYO Fitness to market the SpiraFlex-based DoubleFlex portable gym. 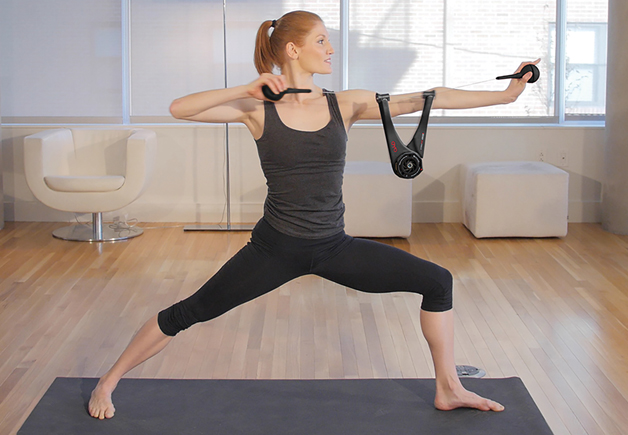 The DoubleFlex uniquely applies resistance to both sides of a muscle group through one motion, which Francis claims greatly improves the efficiency of workouts. It boasts an extremely portable form factor, and, while the device itself weights just 2 pounds, it provides up to 25 pounds of resistance.