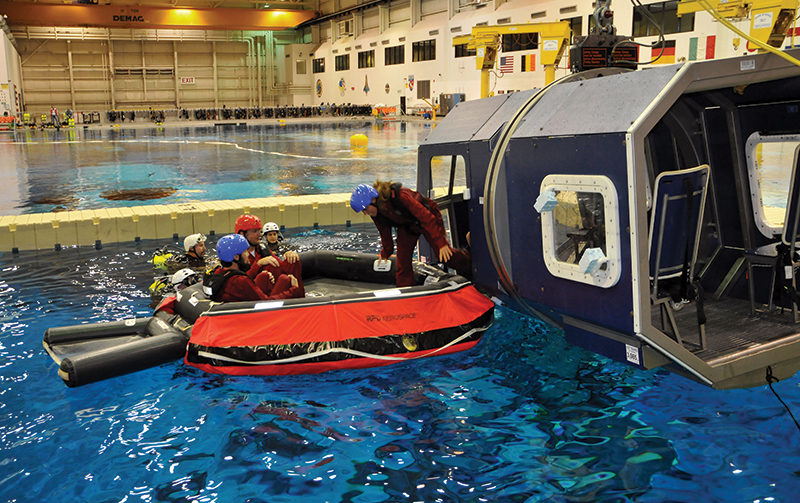 To simulate weightlessness while rehearsing for NASA’s 1966 Gemini 12 mission, astronauts Buzz Aldrin and Gene Cernan practiced spacewalks underwater, floating fully suited around a mockup of the space capsule in the swimming pool of a Maryland prep school.

After that mission both demonstrated the effectiveness of such training and proved astronauts could easily work outside a space vehicle, the Space Agency began investing heavily in underwater spacewalk simulation, which would become a staple of astronaut training. As a result, offshore oil workers and others who need controlled aquatic training environments have better options than renting a school’s swimming pool.

NASA has constructed a handful of underwater training facilities over the years, but the one where astronauts currently train is the largest and most sophisticated yet. Built in the mid-1990s to accommodate mockups of the enormous International Space Station (ISS), the Neutral Buoyancy Lab (NBL) at Johnson Space Center’s Sonny Carter Training Facility is 202 feet long, 102 feet wide, and 40 feet deep and holds 6.2 million gallons of water.

In the years after the NBL was built, while NASA was flying frequent Space Shuttle missions to build the ISS, the Agency used the facility almost constantly, with two crews often practicing spacewalks simultaneously, five days a week. With the U.S. portion of the space station largely completed in 2011, training tapered off, with one astronaut crew at a time currently training there three to four days a week, says Angela Prince, the NBL’s external customer business development manager.

As a result, she says, the Agency decided to offset the cost of maintaining the lab and its full-time staff by allowing outside entities to utilize the facility for a fee. “This is really about cost savings and making sure we can maintain the unique aspects of this facility for future NASA needs, while making it available to industry and other government agencies,” Prince says.

Under a Space Act Agreement, Johnson allowed Raytheon, which has been the prime contractor managing the facility since 2003, to partner with industry to offer training and testing services to external customers. Offshore survival and fire training classes began in 2011.

In 2015, Bastion Technologies, a subcontractor to Raytheon providing NBL divers and engineering services, expanded its product line and became the provider of offshore survival and fire training at the NBL. A small business that started out in the aerospace industry in 1998, Bastion had also branched out into the defense and petroleum markets.

“This is a great fit,” says Jorge Hernandez, president of Bastion, which is headquartered in Houston. “It makes sense for us, because we’re already doing a lot of work for Exxon, BP, Transocean, and others who are customers on the engineering side.”

Offshore oil and gas workers going into the Gulf of Mexico and European waters are required to have certain levels of survival training, standards that are set by the Offshore Petroleum Industry Training Organization (OPITO). “OPITO is an international organization that sets the highest safety standards for its training. As such, OPITO is thrilled that we offer our training from such a world-class facility,” Hernandez says.

Originally, only three basic OPITO-certified courses were offered at the NBL: Basic Offshore Safety Induction, Further Offshore Emergency Training, and Helicopter Underwater Escape Training. Bastion has since earned certification for seven more courses, including Minimum Industry Safety Training for Experienced Workers, Escape Chute Training, and alternate versions of the basic courses, geared toward tropical environments. Bastion is the only company in the Western Hemisphere certified to offer the Hydrogen Sulfide Safety course and one of two that offer the Compressed Air Emergency Breathing System course.

“We’ve done quite a lot to expand the curriculum,” says Mike Reece, Bastion’s manager for offshore survival and fire training. “We’ve set an industry record for the most successful certification audits in one year.”

The company also has a contract with the University of Houston to provide students from the university’s Cullen College of Engineering and College of Sciences with offshore survival training.

The NBL is the only place Bastion offers this training, and the company is by far the facility’s largest non-NASA user.

As for the advantages of offering the training at the NBL, Hernandez says, “By far, the most important factor for us is safety. The safety culture of NASA and our training team at the NBL is second to none.”

“We have a medical team in the facility to support NASA operations, so if anything happens, they’re the first responders,” Prince says. Another safety precaution comes in the form of color-coded helmets. Personnel survey new trainees to learn who doesn’t know how to swim or is afraid of water, and those students are assigned red helmets, Prince says. “They self-identify, and then the instructors can see who’s nervous and might panic.”

In what Hernandez estimates has been about 200,000 hours of diving time, the NBL team has never lost work time due to a safety

The facility is also spacious and keeps air and water controlled for temperature, Reece says. “That creature comfort is a big thing we provide. That’s an all-new concept in the oil and gas industry.”

He adds that having equipment like overhead cranes comes in handy, as does the ample staging area. There, the company has set up its smoke maze, where trainees learn how to navigate in low visibility, and the “fire ground,” where they learn to use fire blankets, extinguishers, and other equipment.

Other Federal entities are also making use of the facility, including the Coast Guard, Army Corp of Engineers, and Air Force, as well as Navy divers supporting Orion landing and recovery efforts, Prince says. Among the other private companies working there, Oceaneering International provides remotely operated underwater vehicles for oil and gas testing. Petroleum companies have used the pool to conduct research and development, for example trying out various inspection methods on full-size pipes and other equipment.

Even assuming NASA ramps up its activities at the NBL in preparation for the first crewed Orion missions, scheduled for the early 2020s, Prince says there will still be time and space available for outside groups. “We always expect to be able to do external customer operations,” she says, noting that the facility still isn’t operating at 24-hour-a-day capacity.

For Bastion’s part, the company also plans to continue the partnership well into the future. “We’re very proud and lucky to be able to work with NASA, growing both the NASA and oil-and-gas sides of the business,” Hernandez says. “This really benefits both sides of our company.”

Abstract
At Johnson Space Center’s Neutral Buoyancy Lab, astronauts practice spacewalks underwater to simulate weightlessness. To offset the cost of maintaining the enormous and well-equipped pool, the center charges outside groups to use the facility under a Space Act Agreement. The biggest customer is Houston-based Bastion Technologies, which provides offshore survival and fire training to oil and gas workers. The facility provides the company with a proven safety system, comfort, heavy equipment, and an ample staging area. 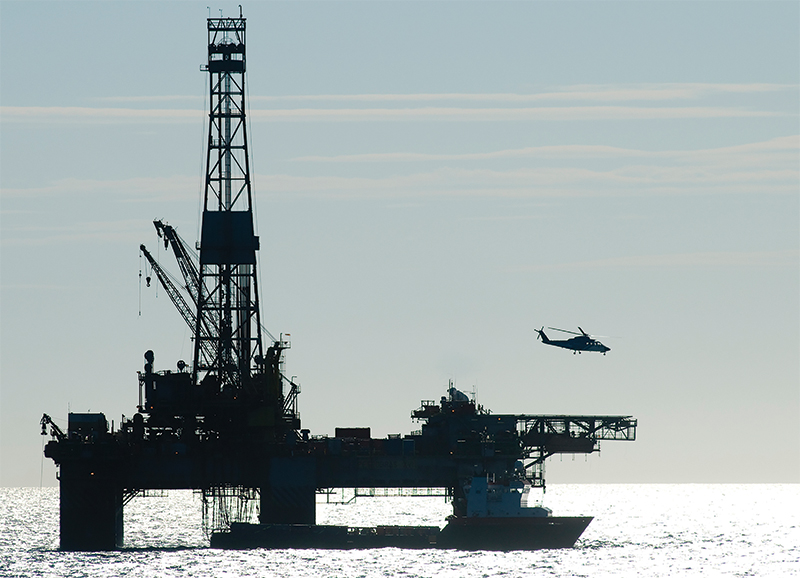 Workers who will deploy to offshore oil and gas rigs are often required to have certain levels of fire and survival training, a need that Bastion Technologies is able to meet through the use of NASA’s Neutral Buoyancy Lab.

In the Neutral Buoyancy Lab at Johnson Space Center, participants in Bastion’s Helicopter Underwater Escape Training evacuate a helicopter mock-up and board a life raft.