Ethernet computer networks date back to the 1970s and are now used virtually everywhere, including in space. Inexpensive, ubiquitous, and easy to use, Ethernet has often connected astronauts’ computers, cameras, and other noncritical devices on the Space Shuttle and International Space Station (ISS).

Until recently, though, Ethernet could never be used for critical systems like the spacecraft avionics responsible for navigation, communication, and other essential functions, because it’s imprecise. There’s no guarantee how long it will take to transmit a message or even whether it will arrive at its intended destination. Messages can interrupt each other or be lost or damaged.

But a sophisticated deterministic Ethernet system developed for NASA’s new Orion space capsule allows all the spacecraft’s systems to communicate on a single Ethernet network—and the technology is also being applied to integrate systems for self-driving cars, industrial applications, defense programs, commercial spacecraft, and more.

Traditionally, critical spacecraft subsystems have been housed on separate computers connected with point-to-point links or dedicated buses, says Andrew Loveless, command and data handling domain lead for NASA’s Advanced Exploration Systems Avionics and Software project and an engineer at Johnson Space Center. For example, he says, the ISS has a highly tiered network, with subsystems communicating indirectly by sending messages up the network “tree” and back down.

“That’s generally not ideal, because you have more complexity, and you have all the size, weight, and power concerns,” Loveless says, noting that the arrangement requires each function to be housed on a separate computer, each with its own power supply.

As they were planning Orion, NASA engineers wanted to take a new approach, replacing this federated architecture with a more integrated network, but the technology to do so didn’t exist in a mature form.

TTTech Computertechnik AG, based in Vienna, Austria, with its U.S. headquarters in Andover, Massachusetts, was already working on technology to build a more reliable Ethernet network. The company had been partnering with Honeywell for aerospace applications since 2000, contributing, among other things, early versions of the company’s Time-Triggered Protocol chips. Cooperation between the two companies started with a five-year NASA project that enabled the application of Time-Triggered Ethernet to several of Honeywell’s engine programs, as well as the Airbus A380, the Boeing 787, Bombardier’s C Series of airliners, and Embraer’s Legacy 450 and 500 business jets.

“What Time-Triggered Ethernet does is create three traffic classes for messages of different criticality,” Loveless explains. Only the most critical data is time-triggered, meaning it’s scheduled into time slots that don’t interfere with each other and is guaranteed to be transmitted and received at specific times. “You’re essentially reserving that bandwidth ahead of time,” Loveless says. Less-critical but high-priority data is rate-constrained, meaning it is transmitted reliably within strict timing constraints. The rest of the bandwidth is available for noncritical messages.

“No matter what you do with noncritical data, you’re not going to interrupt any of those time-triggered messages,” he says. This is why all the systems can run on the same network. “It’s a pretty big departure from the way past space avionics have been developed.”

Honeywell early on became part of the team developing the avionics for Orion, so by the time Johnson Space Center and TTTech signed a Space Act Agreement in 2009, the company’s technology was already being incorporated into Orion’s electronics.

Rather than passing messages up and down tiers, anything on Orion’s network can potentially communicate directly with anything else on the network. The arrangement allows engineers to maximize computing power and reduce the number of computers, because one computer can carry out more than one function. Loveless says this has dramatically lowered the avionics’ size, weight, power consumption, and complexity.

Another major benefit of scheduling high-priority messages is that it allows networks to be built with a modular approach, with individual functions able to be added or removed without interfering with each other or affecting the rest of the network, says Mirko Jakovljevic, engineer and marketing manager at TTTech. “I don’t need to retest everything together when I change a function.”

Loveless says the setup, known as integrated, modular avionics, provides additional flexibility by allowing functions to be moved from one computer to another. “A computer that’s processing sensor data doesn’t have to be collocated with that sensor,” he says. “You’re decoupling functions from the platforms they’re running on.”

Although the ability to move functions around isn’t all that pertinent to Orion’s network, he says, “that’s the direction our avionics are going.”

To help other industries also go in that direction, NASA’s 2009 Space Act Agreement with TTTech set about developing an official standard for Time-Triggered Ethernet through the engineering association SAE International. Loveless says NASA engineers are now helping the Consultative Committee for Space Data Systems create additional international standards enabling the use of Time-Triggered Ethernet for spacecraft.

“NASA helped give us major credibility and launched standards others could follow,” says Perry Rucker, director of sales and operations for the Americas at TTTech. “They helped to open up markets by sharing with the press and the markets what they were doing with the onboard data network.”

The application of the technology to the Orion avionics and the feedback and lessons learned from that work ensured Time-Triggered Ethernet products that are more refined and robust and now marketable across several industries, says Jakovljevic.

In particular, NASA’s help in developing a standard for the technology supported market development and led to adoption by key players, he says.

TTTech also provides Time-Triggered Ethernet control systems for Vestas wind turbines, a contract it won around the time of the technology’s standardization. Rucker and Jakovljevic note that the modular systems can be reconfigured for different turbines and increase reliability for machines that are often in harsh environments and difficult to reach to make repairs or adjustments.

The company’s largest market, however, is the automotive industry, where Time-Triggered Ethernet integrates advanced driver assistance systems and is expected to enable autonomous systems. TTTech is developing an embedded platform to host all the applications that will support driver assistance and, eventually, self-driving cars for automaker Audi, a part-owner of the company. As in space travel,

Rucker estimates that by 2025, about three-quarters of cars on the market will have the ability to drive themselves, thanks in part to Time-Triggered Ethernet.

He says the company also plans to break into industrial applications, where it could optimize manufacturing operations, as well as the railroad industry.

“In all the transportation industries, it’s about adding functionality while reducing the number of computers and network devices, increasing robustness, and improving the capability to move easily from one generation to the next,” Rucker says. “This all leads to reductions in cost.”

TTTech now has more than 550 employees worldwide, three or four times the company’s size when the Orion work began, Rucker says. He credits much of that growth to the springboard NASA provided by standardizing, publicizing, and proving Time-Triggered Ethernet in a highly demanding application. “This was really great support from NASA.”

Abstract
Ethernet traditionally could not be used for critical systems because it couldn’t guarantee when or whether signals would reach their destinations. TTTech, whose U.S. headquarters is in Andover, Massachusetts, developed a more reliable system, called Time-Triggered Ethernet, which it honed under a Johnson Space Center subcontract to build avionics for the Orion capsule. The technology, which allows for far simpler data handling on fewer computers, is now applied to launch vehicles, planes, wind turbines, and driver assistance and self-driving cars. 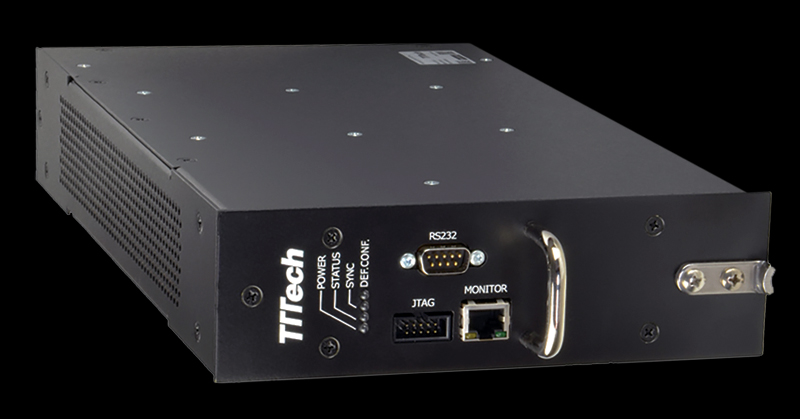 TTTech products like this 24-port AFDX Switch A600 Pro, which meets civil aerospace standards for bandwidth-regulated traffic filtering and policing, are built on Time-Triggered Ethernet technology the company refined and expanded under a NASA subcontract to develop avionics for the Orion space capsule.

Even before TTTech began developing avionics for the Orion capsule, the company worked with NASA to apply its Time-Triggered Ethernet to a number of commercial airliners, including the Boeing 787 Dreamliner.