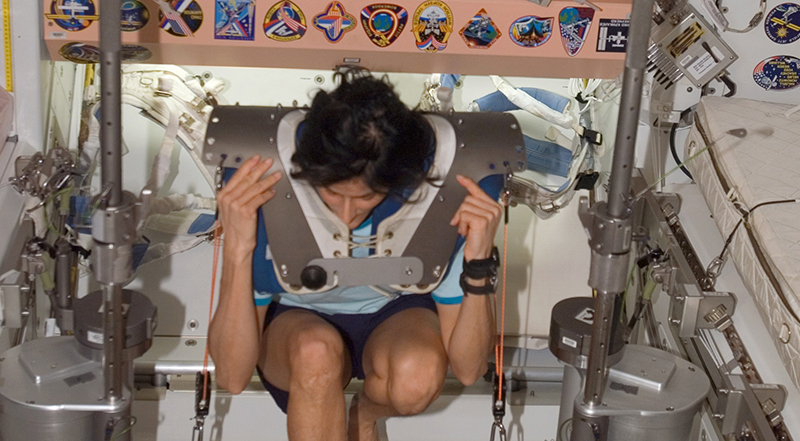 The commercials were once ubiquitous, and the machines soon appeared in spare rooms and garages across the country. The Bowflex Revolution was a phenomenon of the 2000s—an exercise system that promised to bring the total gym experience into the home—and it continues to sell well today. But it might not exist if not for NASA.

In the 1990s, inventor Paul Francis had an idea for a weight-lifting system that didn’t use weights.

“I was always interested in fitness, and I thought, ‘What if I could build a portablegym?’” he says.

Instead of relying on a series of dumbbells or stacks of cast-iron plates to provide the resistance the user works against, he had experimented with metal springs that would strain to retain their shape when pulled. But those failed faster than he wanted—after just around 10,000 cycles. Undeterred, he sought out an alternative material and came across an elastomer compound, which he enhanced and fashioned into spiral-shaped torsional springs of various dimensions.

In the fall of 1996, Francis was reading a newspaper at the coffee shop beside his office in Kansas City when he came across an item about the great lengths one astronaut had gone to in attempt to retain muscle and bone mass and density while in orbit in the Russian Mir space station. Upon return to Earth, she was able to walk but was still wobbly from muscle and bone atrophy.

By then, NASA was well aware that prolonged weightlessness causes muscle and bone loss. What wasn’t clear was how to address the problem. Stationary bikes and treadmills, outfitted with bungee cord to strap the user down, weren’t doing the trick. And weights, of course, are useless where there is no gravity. The problem was made more urgent by the construction of the International Space Station, which was expected to begin soon and house long-term crews.

Francis thought his springs, which he had dubbed SpiraFlex and had configured into round plates that could be stacked to increase resistance, might be the answer. He managed to find the direct phone number for the chief of the Medical Operations Branch at Johnson Space Center. Soon he was on his way to Houston with a series of prototypes.

Liking what they saw, Johnson engineers asked him to contract through commercial partner Lockheed Martin and get to work on an astronaut exercise system.

“A lot of the intellectual property and innovation goes back to that project and NASA funding,” Francis says, adding that the work, carried out over about 18 months, also included extensive testing for performance and durability. “It enabled us to take a prototype technology and turn it into a technology that met the specifications that would be required for not only NASA hardware, but also a commercial piece of equipment.”

The end product for NASA was the Interim Resistive Exercise Device (IRED), which used stacks of the elastomer spring disks, now known as FlexPacks, arranged in two cylinders that produced up to 300 pounds of resistance. A 16-week ground test showed exercising with the IRED produced the same results as using free weights.

In 2000, the device was launched with the first long-duration crew to stay on the space station, where rotating teams of astronauts would use it for the next decade.

Astronaut Leroy Chiao, who spent more than six months aboard the space station in 2004 and ’05, during which he became an avid IRED user, has publicly credited the device for the fact that he scored higher on all of his post-flight strength tests than he had before leaving for the station.

But Francis was just getting started. By the time the IRED made it to the space station, he had changed the name of his company to SpiraFlex Inc. and begun approaching fitness companies.

Francis licensed SpiraFlex technology to Schwinn Cycling and Fitness Inc. and helped the company design a strength training machine, which it released in 2000 as the centerpiece to an international group fitness program for health clubs called the Resistance Performance Program (RiPP) (Spinoff 2001).

The following year, though, Nautilus Group—which had begun as Bowflex of America Inc.—purchased Schwinn Fitness, and RiPP was discontinued. A few years later, when Nautilus was looking for an alternative to its rod-based Bowflexgym, the company didn’t have to look far.

“I came along and presented my SpiraFlex technology and mechanical system, as well as a number ofgym configurations that incorporated the technology, and they developed the Revolution based on a combination of them,” Francis says, noting that he holds patents not only for the SpiraFlex technology at the heart of the system but for all the machine’s inner workings and many configurations.

The Bowflex Revolution, Nautilus’ most successfulgym, was launched in 2005.

“The biggest advantage of resistance-based workout equipment is that it enables the machine to be lightweight, take up less space, and be quiet,” says Gregg Wilson, director of product line management at Nautilus, which is now based in Vancouver, Washington. For example, he says, while the Revolution only weighs about 220 pounds, its leg press station can provide up to 600 pounds of resistance “and a range of power unheard of in a regulargym.”

Resistive equipment also eliminates the momentum free weights generate during lifting, which can be hard on joints and also allow the user to “cheat a bit” on the upswing, as Wilson puts it.

He notes that SpiraFlex offers an additional advantage over other resistance-based equipment, including the original Bowflex line, which relies on “power rods” that the user bends, and others that use springs or elastic bands. “Rod-based gyms are great, but the resistance is progressive, meaning that, as you move through the range of motion, it gets harder,” Wilson explains.

FlexPacks, on the other hand, provide “linear resistance,” meaning the effective “weight” stays the same from the start of each stroke to the end. “Working out on the Revolution feels more like true free weights, but without the dangerous inertia, and helps the user maintain better and more controlled form,” Wilson says.

That quality, together with an innovative configuration, allows the Revolution to recreate the commercial gym experience with more than 100 aerobic and strength-training exercises.

“The Revolution has been our best gym, offering the most exercises and keeping people fit and strong for over 12 years,” Wilson says.

Meanwhile, Francis has retained rights to his SpiraFlex techology and founded another company, OYO Fitness, to leverage the technology even further toward convenience and portability with a line of devices that weigh only two pounds but enable dozens of exercises (Spinoff 2018). And there’s more to come.

“We have a line of new products we’ll be introducing in all sizes, shapes, and price points,” he says, adding that the company is also developing group exercise plans based on its products for health clubs, corporate wellness programs, and senior living facilities.

Francis notes that these commercial fitness devices that have benefited tens of thousands of users to date were enabled by the development work with NASA to keep astronauts in shape on the space station. “The funding from NASA enabled us to take the technology to the next level of development and commercialization, so SpiraFlex was greatly improved due to the NASA project.”

Abstract
The Bowflex Revolution home gym was a phenomenon of the 2000s and to this day sells well—but it might not exist without NASA. Inventor Paul Francis took his idea for a weightless weight-trainer, using elastic resistance, to Johnson Space Center, which was looking for ways to help astronauts retain muscle mass and bone density in microgravity. The end product launched to the space station in 2000, and Francis began approaching fitness companies. Nautilus Group, now based in Vancouver, Washington, licensed the technology and released the Bowflex Revolution in 2005.

The SpiraFlex FlexPacks, originally developed for NASA, can be added or removed to adjust the Bowflex Revolution’s resistance. 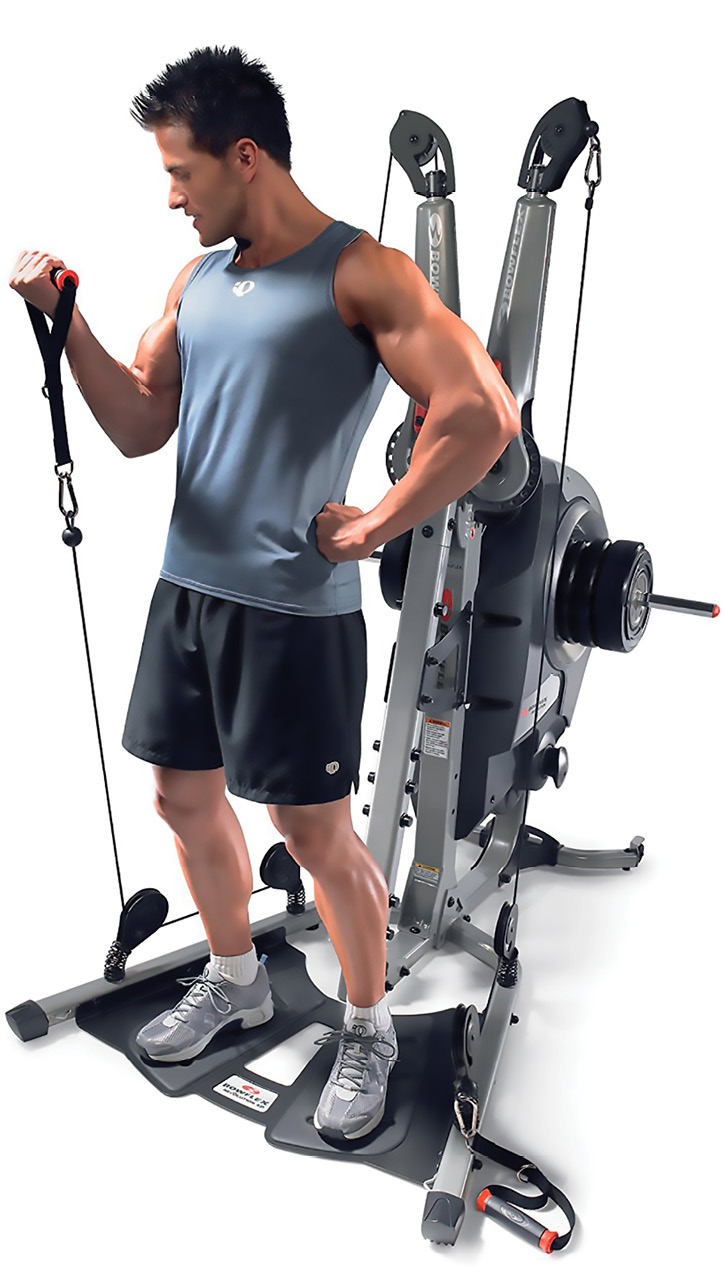 The popular Bowflex Revolution home gym uses SpiraFlex technology to provide up to 600 pounds of resistance, while the machine itself only weighs about 220 pounds. 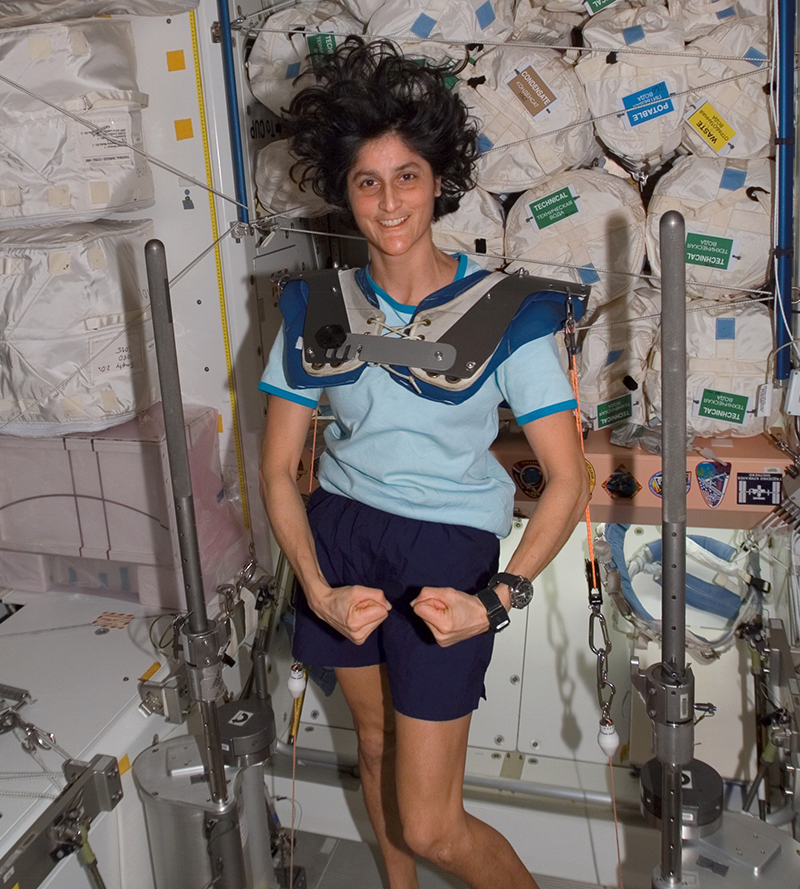 Astronaut Sunita Williams poses while using the Interim Resistive Exercise Device on the ISS. The cylinders at the base of each side house the SpiraFlex FlexPacks that inventor Paul Francis honed under NASA contracts. They would go on to power the Bowflex Revolution and other commercial exercise equipment.