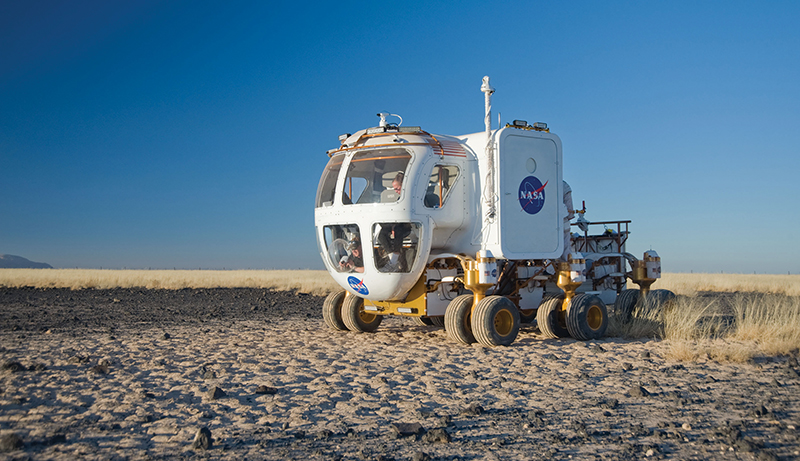 What would it be like to venture to another planet? To kick up red dirt on Mars and crawl through the lava tubes that wind beneath the surface? To build a shelter and plant a garden?

NASA has spent years imagining—and studying—just that, gathering images and data with satellites and rovers, using computer models to simulate alien environments, and even building mockups to test out ideas here on Earth.

Now anyone, from astronauts to school kids and in between, can experience the results of that research like never before, in an immersive virtual reality game set on Mars developed by Miami-based Fusion Media Group Labs.

Pat Troutman is the human exploration strategic analysis lead at Langley Research Center, whose work on NASA’s Evolvable Mars Campaign provided much of the research underpinning the game. “In the opening scene, you start off in Mars orbit, and once you’re entering and landing, it’s pretty much what the Evolvable Mars Campaign was striving to achieve,” he says.

Part of the challenge of the NASA campaign, says Troutman, was that “it had to be sustainable with resources we had been given. Instead of looking for the optimal approach to Mars, we asked, ‘What could we do with what we have?’”

The most important change they made in their plan, versus earlier concepts, was that everything had to be reusable. That meant designing a spacecraft that could make multiple trips, designing a propulsion system and trajectory that minimized fuel needs, making full use of Martian resources onsite, and, crucially, returning to the same landing spot on Mars, where they could reuse habitats, rovers, and other supplies brought on previous missions.

The rover that astronauts would use to explore was also completely redesigned to make it more efficient and cost-effective. “It features a really cool concept we call ‘suitports,’” Troutman explains. “Basically, the spacesuit has a hatch in the back of it” that can attach directly to the rover hatch. “If you open both at the same time, you can crawl out of the suit and into the rover without having to go through an airlock and without transferring any dust back into the rover.”

That makes it easier to explore the surface, he says. “It’s the best of both worlds—use the spacesuit for walking and grabbing, and use the rover to drive around. Plus, the rover is a mini camper. They can go for a week camping in that thing and go on long excursions far from base.”

The Evolvable Mars Campaign was written up into a report for headquarters and is available to the public—but it’s not particularly well known outside NASA.

In fact, what initially sparked the imaginations of the game developers back in 2014 was the launch of the highly publicized Mars One campaign, a private company’s effort to develop the first permanent human settlement on Mars.

In light of the media attention given to the attempt, a quartet of Massachusetts Institute of Technology graduate students decided to analyze the plans to see if they were actually feasible. “We were looking to see if they had presented any analysis to justify some of the claims they were making on life cycle costs and logistics demands,” explains Sydney Do, who now works at the Jet Propulsion Laboratory (JPL).

“We mined their website for every data point we could find and filled in the gaps with the NASA standard design reference manual.”

Their findings: the plan wasn’t realistic. But their report got a decent amount of public attention as well, including from Fusion Media Group Labs. Company representatives got in touch with Do and the others, asking for advice on making a Mars exploration game, one that showed a plan that could actually happen.

“I just found it so fascinating to approach it from the science,” says Julian Reyes, director of virtual and augmented reality at the company. “Typically games have this conventional structure where you get points or are tasked with survival, the concept of a game itself, and we didn’t want to make it a game, instead we wanted to use an interactive engine as a way to present scientific information.”

Do and his fellow graduate students began funneling research to Reyes and his team and then helped them get in touch with the NASA researchers behind the science, including Troutman.

“After a year of conversations, we signed a Space Act Agreement and started work on Mars 2030,” Reyes says. “This involved several trips to Langley Research Center, to Johnson Space Center and Michoud Assembly Facility to gather up as many resources as possible. We also collaborated with JPL to get the digital terrain models for the exterior.”

The developers got a sense of what driving the Mars rover would feel like by driving a NASA model, and they even recorded audio to incorporate into the game. Then they took all that research and, over a year and a half, built it into a video game engine.

The end result is a virtual reality that looks and feels like the real thing—and that’s according to the experts. “We had Michael Gernhard, a four-time astronaut who designed the rover, he was driving in the game and said this feels like the real rover,” recalls Reyes.

There are a few differences, Troutman insists. “The habitats are much bigger and airier and cleaner on the inside than they’d actually be.” But he says, overall, the game is a great representation of the work he and his team did, from big things like the rover and the landing site, down to the tiniest details like the logo on the plant growth module.

Do says he thinks the experience will help increase public excitement around space exploration. “Something like this—someone who’s excited about space exploration makes something that enables anybody to experience the same joy he does—I think that’s just amazing.”

And that, Reyes says, was largely the point. “We see this as an educational experience. Every single module has info about the systems NASA is working on,” he notes. “We want this to be in the hands of the students to inspire that sense that we can make it to Mars, and hopefully some of them decide to become scientists themselves and try to elaborate on these concepts.”

For that reason, the game was immediately available free of charge to educators and, as of March 2018, became free to all users through the NASA website. Moreover, in March, Fusion Media Group (FMG) Labs made the Editor tool of their game engine free and public as well, “so other developers and scientists can use our rover models and terrain data to develop their own concepts.”

After all, “if NASA’s information is free to the public, and our project is built with that data, ours should be too,” Reyes emphasizes.

The company’s hope is that it’s creating a tool that can be used to simulate many other worlds and modes of exploration, as well as upgrade habitats and model different types of resource management on those worlds.

Within Mars 2030, everything is interactive, so users can build new technology and new habitats and see how they function within the Mars environment.

The new platform is exciting for the scientists too. For example, research results tend to look like columns of numbers and dots on graphs. Seeing that play out in a virtual reality game “makes you experience what the numbers are telling you, and that can help with physical intuition,” Do says. “And it will probably improve the science and engineering just through that whole experience.”

Abstract
What would it be like to build a shelter on Mars? To plant a garden or explore its lava tubes? Now anyone can experience it like never before, in an immersive virtual reality “experience” developed by Miami-based Fusion Media Group Labs. Mars 2030, available for download and free for educators, is the result of years of consultations with researchers at Langley Research Center and across NASA. Its Editor tool is also free to the public, so others can build new simulations.

Players can explore the surface of Mars like never before, even picking up samples to analyze with instruments modeled on real NASA technology. The spacesuit is also designed using concepts developed for real future Mars missions. 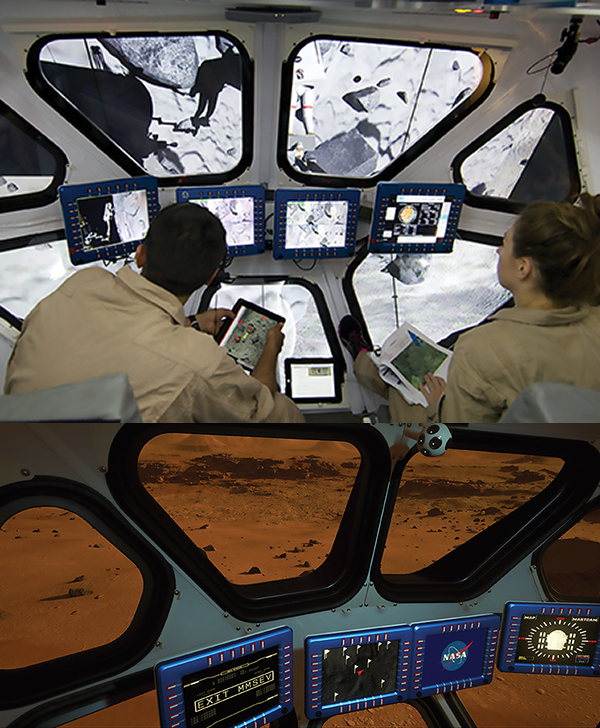 When Fusion Media Group Labs was designing its virtual reality game, Mars 2030, it consulted extensively with NASA and modeled the experience closely on the Agency’s proposals for sending humans to the Red Planet. The FMG Labs team even drove a model of the proposed rover (top), and designed their virtual rover to mimic it exactly (bottom).

Astronauts, engineers, and geologists tested this Multi-Mission Space Exploration Vehicle concept in the Arizona desert in 2008. A vehicle like this might one day carry astronauts across the Martian surface.