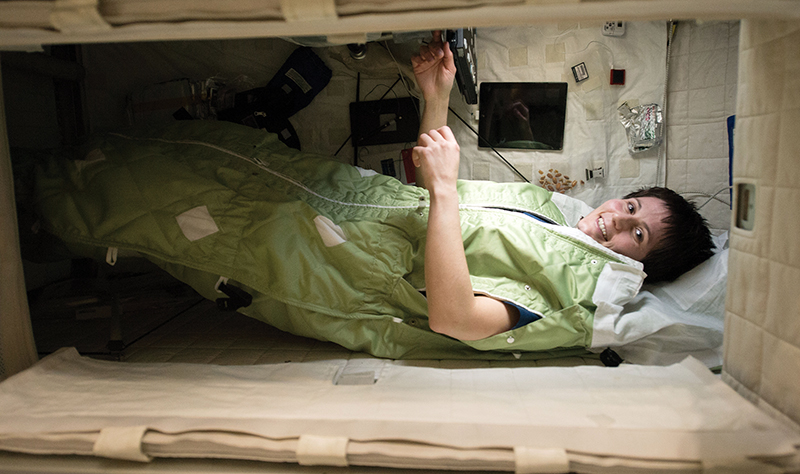 In the age of smartphones and e-readers, with touchscreens and LED displays seemingly on every appliance and everywhere else, it has also become quite commonplace to talk about the problems of too much blue light from all those screens and how it is costing us sleep.

But that basic fact—that shorter wavelengths of light cue our body for alertness—is something that has only fairly recently become understood. And much of the fundamental research that led to these revelations owes its origins to NASA and the Agency’s need to ensure rest for astronauts.

Back when astronauts only spent a few days at a time away from Earth, how they slept was not the biggest concern. And while the lack of gravity and a normal day/night cycle was clearly disruptive to the body’s circadian rhythms, the elite men and women of the astronaut corps could “tough it out.”

But by the 1990s, trips into orbit were stretching into weeks, and with the construction of the International Space Station, astronauts began regularly spending months at a time in space. Toughing it out was no longer a viable option.

To better understand just how spaceflight impacted rest and alertness, the Space Agency began its own research and supported outside studies, mainly through Johnson Space Center and the National Space Biomedical Research Institute, a nonprofit research consortium of NASA and more than 70 other agencies, universities, and institutions. One report, published in the Journal of Biological Rhythms in 1998, studied the sleep and circadian rhythms of four astronauts over 17 days of a Space Shuttle mission.

“Like other animals, in humans the circadian timekeeping is entrained to the correct period and temporal orientation by [environmental cues], the most important of which is the alteration of daylight and darkness,” the authors noted.

But it wasn’t until several years later that details began to emerge of the specific impact of short, or blue, wavelengths, which are abundant in daylight. In one of several NASA-funded studies, this one published in the Journal of Clinical Endocrinology and Metabolism in 2005, researchers found that “the efficacy of light in phase shifting human circadian rhythms is wavelength dependent and that the human circadian pacemaker is more sensitive to short (460 nanometers) versus long (555 nanometers) wavelengths of visible light.”

The study also noted that the sensitivity was true even for subjects who were otherwise totally blind. Ultimately, NASA-funded studies found that there’s a third type of photoreceptor in the eye that responds to blue light, in part by suppressing production of melatonin, which plays a role in governing our sleep and wake cycles.

As the picture clarified, NASA began working on tailoring LED lights to different wavelengths, in the hopes it could artificially create a day/night light cycle for astronauts to stimulate alertness and help them sleep when appropriate.

Here on Earth, a number of companies have done the same (Spinoff 2015, 2018), including one by the name of Headwaters Research and Development Inc., based in Marblehead, Massachusetts, and Ottawa, Canada, which developed a sleep mask with light cues to help wearers fall asleep faster and sleep more deeply throughout the night.

“It started probably back in 2011. We took over production of this simple mask that helped you meditate to go to sleep. It used some glow-in-the-dark strips inside of a sleep mask,” explains Philippe Genereux, Headwaters’ vice president of research and development. “People enjoyed that and found it useful,” he says, but the developers thought they could make it even more useful.

Genereux and his colleagues began researching different colors of light and came across the NASA research. “We learned that blue light improves alertness and it helps to overcome sleep inertia in the morning,” he notes, and “we knew we wanted to avoid large amounts of blue light at night.”

The team interviewed a NASA-funded researcher and read studies going back two decades, to design a brand-new “smart” sleep mask under their Sound Oasis brand, called Illumy. In addition to serving as a “sunrise” alarm clock by cuing short-wavelength, blue light in the morning, the mask also tries to do the opposite by using longer-wavelength, red light to cue sleepiness at night.

“Some researchers say that pure darkness, total darkness at night is the best situation to help people sleep,” explains Genereux. “Our product does offer that option, but our experience with Illumy is that some people need a little extra help to get to sleep. Just like relaxing sounds can help some people get to sleep, we’ve found that a dimming red light is a similar tool that we use.”

In early 2017, Sound Oasis launched a crowdfunding campaign on Indiegogo to introduce its Illumy mask, quickly raising well over $50,000 and selling more than 500 of the first-generation product.

Since then, the company continues to make the mask more lightweight and flexible to improve the wearer’s comfort. That includes improving the light panels, which are only a few millimeters thick, Genereux notes.

“One thing we learned with our first-generation sleep mask is that many people don’t want their eyelashes touching the inside of the mask,” he adds, so the company has built up the foam that lies against the wearer’s face, to keep the mask away from the eyelashes.

The company has also developed an app for Apple and Android devices that programs the mask to the users’ individual settings, including when they aim to fall asleep and when they need to wake up.

And, in addition to simply tailoring light wavelength, the mask has the option of pulsing the light—slower red light at bedtime and quick, blue light in the morning—which the company says helps guide the wearer most effectively to sleep and to wake. And because the mask also blocks out all ambient light from the room, the company argues it is more effective than other nightlights or alarms that use light cues.

Ultimately, however, Genereux says it’s really the NASA research on blue light and the cues it gives to the circadian rhythms—which is now becoming well known—that is driving the success of the mask. “That’s ended up being the biggest point of interest from the press or from bloggers—they’re really excited to see an application of all this talk of blue light and red light.”

As a next step, the company is working on tailoring the device to help travelers tackle jet lag. And meanwhile, since the end of the crowdfunding campaign, Genereux says international sales have been excellent. “We’ve sold quite a few recently in Japan and Australia,” he notes, adding, “We’re happy with the initial launch and even happier to see the interest from all over the world to help us build out our sales channels.”

He credits NASA and its early research with a big role both in increasing the understanding of how light impacts circadian rhythms and with inspiring products like Illumy. “Some people may think the link from NASA to small companies like ours might be a long one, but because of NASA’s visibility, a lot of engineers are looking to the work NASA’s doing for inspiration.” 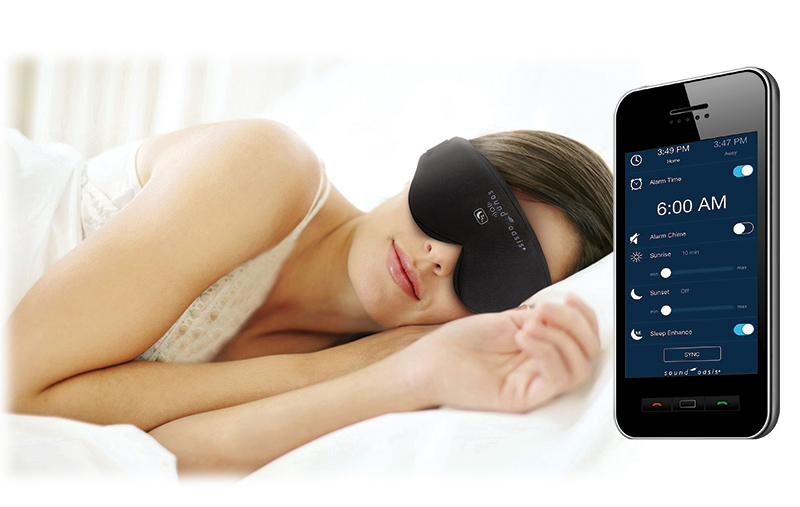 Headwaters Research and Development used NASA’s published findings on light wavelengths and alertness to help create its “smart” sleep mask, which can be controlled with a smartphone app. Among other features, it can pulse red light at bedtime and blue light in the morning to help the wearer fall asleep and wake up.

Sleeping in orbit can be difficult, where the usual day/night circadian cues are absent. NASA research to help astronauts sleep better in space has led to discoveries about how short, or blue, wavelengths can increase alertness and impede sleep.