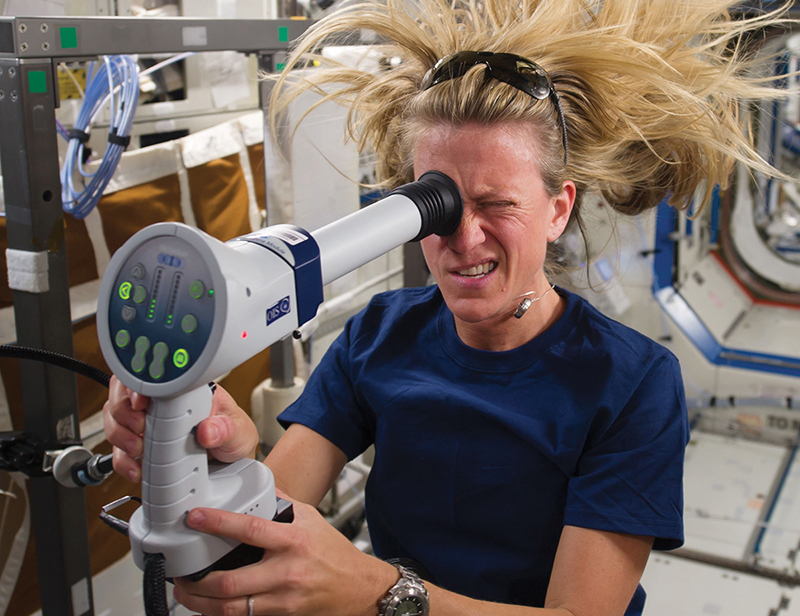 Even NASA can be surprised.

The Space Agency works hard to search out surprising discoveries, of course, but it works equally hard to avoid unpleasant ones related to the safety of its astronauts.

In the interest of the latter, NASA has identified approximately 30 risks to humans in space, from increased radiation to decompression sickness to interpersonal conflict between crew members. All of these risks are being studied carefully, explains Craig Kundrot, division director for Space Life and Physical Sciences Research and Applications, and any gaps in knowledge are being identified.

But even with this detailed roadmap of risks, he notes, there are still unknowns. “When we went from two-week Shuttle missions to six-month space station missions, that was a twelvefold increase in duration. All of a sudden we started seeing these vision problems,” he recalls. “That caught us by surprise.”

Although NASA is still working to fully understand the details of those vision changes and just how much of a risk they pose, researchers believe they are related to changes in blood flow in microgravity, which is something that has been studied for many years.

One of those studies dates back to the Shuttle days. Ron Midura, of the Cleveland Clinic’s Lerner Research Institute, received funding through Ames Research Center’s Fundamental Space Biology program to study the hypothesis that vascular remodeling precedes and impacts muscle and bone loss. Midura’s project started with a ground-based model—studying the hind legs of rats kept elevated, to mimic the decreased blood flow seen in microgravity.

But after he began, he was presented with an opportunity to incorporate into his study tissue samples from mice that had flown on the final mission of the Space Shuttle Program, in 2011, which he could then compare with his ground-based samples. “The concept from our end was to look at gene expression changes in endothelial cells [which line blood vessels] to see if they are altered in spaceflight compared to ground control specimens,” he says.

Another crucial part of getting useful data was being able to count the number of blood vessels in the tissue sample and make careful measurements of the thickness and shapes of the vessels. Typically, Midura explains, students would “take all the images, make outlines of the different regions, then count vessels and report the number of vessels, as well as a limited amount of data on thickness or shape of vessels.”

The problem is, interpreting the images can be difficult, as is measuring the vessels. “Any manual accounting, even by highly trained technicians, would have been subjective and led to unnecessary variability,” he notes. “The other part: it takes a long time, even for someone experienced, to do the full set of analysis of what we wanted for each tissue section.”

Instead, Midura decided to turn to computer analysis to find the stained blood vessels and, knowing the spatial size of the pixels in the images, calculate their number, size, thickness, and other attributes.

To get the analysis Midura needed, he turned to a software program created by ImageIQ, which was originally spun out from the Cleveland Clinic where he is based but has since been acquired by Philadelphia-based ERT.

ImageIQ’s software library was developed to analyze 2D and 3D images for research, but, as is typical for bleeding-edge research, the specific type of analysis Midura was looking for required some innovation. “We found trying to force-fit endpoints and metrics into previously existing software doesn’t work,” explains Amit Vasanji, cofounder of ImageIQ and now chief technology officer of imaging at ERT.

Instead, the company custom-developed an algorithm that segmented each image into five different regions and then used further analysis to detect two different stains within each region. It also created a filter that helped the computer better differentiate between the stained blood vessel and the surrounding tissue.

“The algorithm looks at every single pixel and then looks around it to see whether it’s just noise or belongs to a larger structure that belongs to the analysis, Vasanji explains. In this way, the program is able to identify structures and edges in a way that might not even be visible to a human eye, and it can make extremely accurate measurements across the whole image.

Although the work was specific to its project, Vasanji says it has since proved useful for many other projects. “We talk about it like a spice rack. Every specific project requires a different mix of spices and ingredients,” he says. Once they create a new algorithm, however, it goes on the “shelf” and can be used later.

Midura’s study was successful—it showed that, indeed, there are genetic changes in the lower-leg vasculature system during spaceflight, and these precede the bone and muscle loss that have been observed—though he is quick to caution that the work is very much ongoing.

Over at ERT, Vasanji notes the advanced imaging software has also powered quite a few important scientific results unrelated to spaceflight, for example in clinical studies of pulmonary embolisms. “It used those filters that we had created in Dr. Midura’s project and segmented 3D networks in vessels in the lungs, and it detected where there are disruptions in the vessel connectivity where you might have an embolism.” Likewise, the tool is being used in clinical trials for stents and aneurysms, as well as for identifying lesions in the bladder.

Another potentially lifesaving application: to help study cancer—and one day potentially help treat it. Specifically, using the filters and algorithms created for Midura, researchers can identify the three-dimensional shape of the tumor within an image series.

“Right now, in clinical practice, the standard is to do a 2D view in a CT scan,” Vasanji explains. But if the tumor is an irregular shape, that two-dimensional slice will miss a great deal of information, details that would be extremely useful, for example, to a surgeon looking to excise it.

Even more importantly, the tumor volume may be growing or shrinking in a way that a two-dimensional image slice does not capture. And knowing the full shape can also help with diagnosis. “Tumors that are benign usually are round with smooth edges. Tumors that are metastatic have spindles and are irregularly shaped,” he says.

A key benefit of ERT’s advanced imaging software, Vasanji notes, is part of what drew Midura initially: that when humans do the counting, the results are not consistent. “You get two readers looking at the same scan, we’ve seen in some cases, 70 percent variability,” he says. That variability doesn’t happen when a computer does the analysis, because the computer applies the same rules in the same way every time.

For Kundrot, back at NASA, these results are a very welcome side effect of the research the Space Agency funds and solicits. “For us, the principle driving question is what happens to humans as we go into space and especially deep space,” he says.

NASA is still working to understand the vision changes that occur in space, and tools and studies like Midura’s will help it find answers.

Abstract
NASA studies the physical effects of space travel, and that research benefits ground-based medical research as well. For a 2011 study on vascular changes in microgravity funded by Ames Research Center, lead researcher Ron Midura called on Image IQ, now owned by Philadelphia-based ERT, which developed software that helped count and identify the edges of stained blood vessels. The software has since been used for many clinical studies, and it may one day help doctors better diagnose—and remove—tumors. 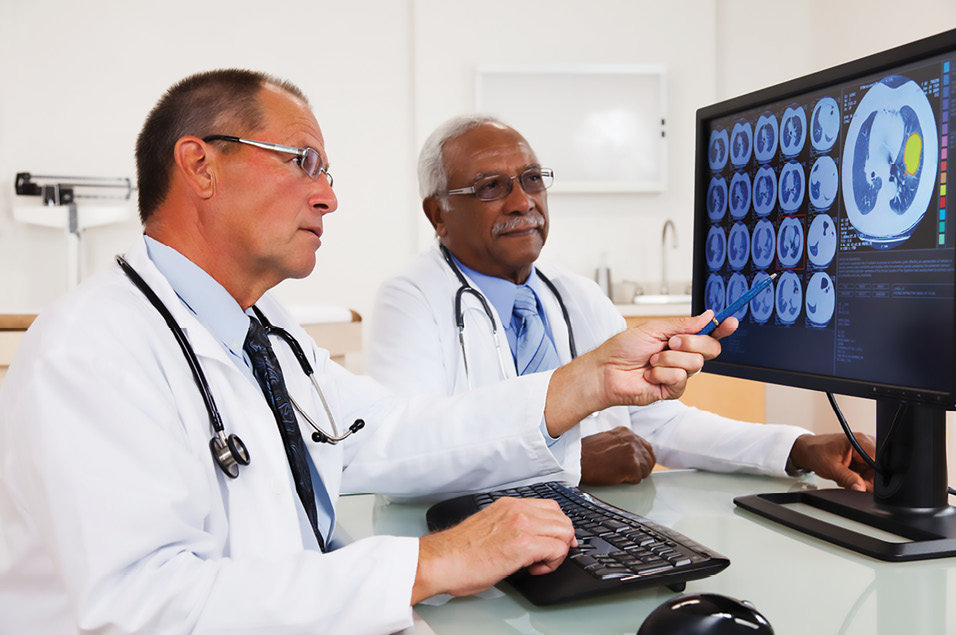 Using filters and algorithms created for Ron Midura’s NASA-funded vascular study, researchers today are able to identify the three-dimensional shape of a tumor within an image series. Among other features, the software is excellent at finding edges in a way that might not even be visible to the human eye.

NASA astronaut Karen Nyberg tests the health of her eyes while in orbit in 2013. As space missions began stretching into months instead of weeks, NASA discovered that astronauts’ vision was getting worse. The problems are believed to be related to blood flow changes from microgravity that have been studied for decades.