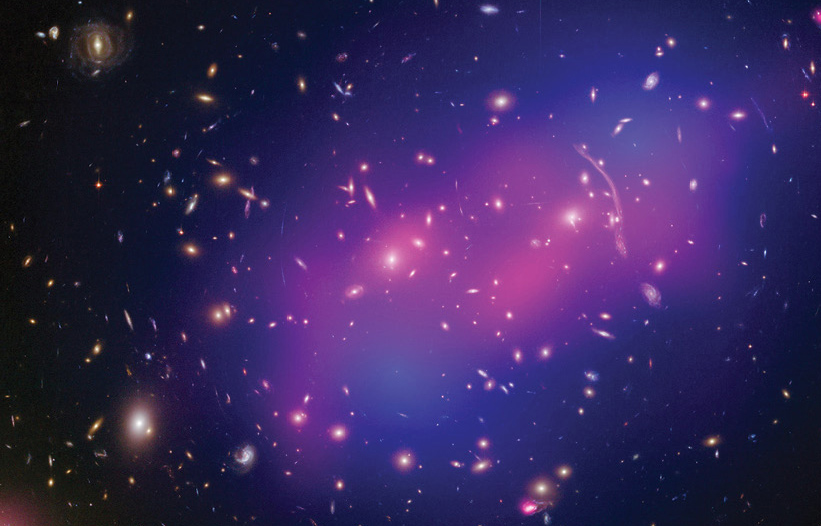 Nobody has ever directly seen dark matter or dark energy, yet physicists and astronomers observe their effects all around us. Dark matter is thought to hold together galaxies that should otherwise fly apart, and dark energy counteracts gravity to make the universe expand rather than collapse.

Researchers are working on new and exciting studies to learn more about these mysterious phenomena, and NASA is a big part of the effort, including by building the next generation of powerful instruments that will hopefully lead to big discoveries. Innovations developed for the task will also have repercussions in fields like robotic surgery and implantable medical devices.

One instrument, built with the help of engineers from the California Institute of Technology (Caltech) and the Jet Propulsion Laboratory (JPL), is set to be installed on Japan’s Subaru telescope in Hawaii in 2020. It will investigate the rate at which hundreds of millions of objects in the universe are moving apart to help understand how dark matter and dark energy are distributed in the universe, explains David Braun, the Opto-Mechanical Engineering Group supervisor for JPL’s Instruments Division.

“This tool will add a lot more granularity to our current understanding of the expansion of the universe,” he says, which will give new insights into the nature of dark matter and dark energy.

This new instrument, called a fiber-fed spectrograph, measures expansion by looking at the red shift of distant galaxies. “If you think of telescopes as very big lenses, they form very big images,” explains Dan Reiley, an instrument engineer at Caltech. In this case, the primary mirror reflects the light through a concentrator, which generates a smaller, brighter image that can more easily be studied. Instead of observing that image with our eyes, “we direct optical fibers to the spots of interest on that image. The fiber sends the astronomical light to a spectrograph,” which breaks apart the light into its spectral components, like a rainbow, and measures them.

If that doesn’t already sound complicated enough, now imagine what it takes to get all the individual fibers, some 2,398 of them, to line up exactly with the pinpricks of light on the image. Each fiber can move independently and needs to have enough range of motion that together, they can cover any point on the image without gaps, yet without tangling—all within the two minutes before the telescope points to a new part of the sky.

In 2008, says Braun, the JPL/Caltech team was working with a private group associated with Pennsylvania State University with expertise in the tiny piezoelectric motor technology that looked most promising for the positioners (piezoelectric ceramic elements change shape when voltage is applied). But finding the miniature motors for the positioners, which the team nicknamed “Cobra,” was really only the start.

That’s because they didn’t just need one or even two positioners, they needed thousands—and each one had to be identical and perfectly precise. And that’s where Victor, New York-based New Scale Technologies came in.

New Scale had invented and commercialized the Squiggle linear piezoelectric motor in 2003 and recognized that this product could be modified for the precise rotary movements needed by JPL/Caltech. The rotary Squiggle motor “only existed in our lab and needed to be commercialized and prepared for serial production,” says New Scale CEO David Henderson.

Moreover, these motors had to be packaged into a complete Cobra positioner, an assembly that integrated the two rotary motors with multiple ball bearing guides and a hollow shaft to allow the fiber to come through. And then the company had to figure out how to do it all with vastly smaller drive electronics, Henderson adds, because “the starting design operated at several hundred volts, with electronics so large they could never be integrated at the scale we needed.”

Much of this was new territory for the company, notes Braun: “Doing the whole positioner, more than just the motors, that was new for them.” In addition, “we pressed them for rigor on quality control, and really we were the highest-volume customer they’ve had.”

Henderson says beyond the innovations required to make all the components work together and at very low voltage, the quality control requirements meant finding high-quality suppliers for all the parts and then developing in-depth inspection processes to ensure each part was exactly right before it moved to the assembly floor.

“These are things that are normal in precision manufacturing, and we already did it to a certain extent—but we improved those processes to a tremendous extent for the Cobra program,” says Henderson.

The work New Scale did has implications well beyond space telescopes, Henderson says, especially thanks to the reduced-voltage, piezoelectric motors. “Everything we do now is at 10 volts or below. Getting down below 10 volts was a major improvement in the overall technology and its application across the board—the motion systems can be miniaturized and integrated to a much greater extent.”

He says piezoelectric drives traditionally require much higher voltage, but they were able to reduce that by sourcing multi-layer co-fired piezoelectric components. “You layer it up like a cake,” he explains. “You press together the piezo elements with screen-printed electrodes. The thinner the layers, the lower the voltage for the same amount of shape change.”

New Scale now uses these reduced-voltage piezo elements across the board. “Even some of our more powerful products are now using reduced-voltage drives. It’s essential for our mini-mechatronic solutions,” he says.

The company has also expanded its product line, from its previous linear-only positioners to now including rotary modules, as well as offering multiple motors within a positioner. And “it’s expanded our supply chain and our customer base. We’re working with vendors and customers that we weren’t working with before.”

Overall, “being smaller and fully integrated makes it possible to move optics in very small spaces that were previously not possible,” he says, but he acknowledges they are still in the phase of building a customer base, especially because “typically, people that have a little knowledge of piezoelectric motors, they think, oh, these need hundreds to thousands of volts coming from a separate box. Our reduced-voltage electronics are embedded with the motor.”

Nevertheless, New Scale’s products are showing up in a variety of contexts, including medical instruments. One, a portable blood analyzer, uses a positioner to provide focus for an embedded microscope. The analyzer fits in a backpack and can field-test someone for HIV.

Henderson reports the company is also getting interest for implantable devices, in robotic surgery, and in machines that sequence DNA, in all of which precise movements and precise camera focus are crucial, and lower power and miniaturization equally so.

Another area of potential interest, Henderson says, is for beam steering in things like lidar, which maps in 3D by sending out laser pulses and measuring how long it takes the beam to bounce off of an object and come back. “Our two-axis rotary positioners point the beam precisely and are about the size of your fingertip.”

Abstract
An instrument designed to study dark matter and dark energy for the ground-based Subaru Telescope in Japan required thousands of miniature positioners powered with tiny piezoelectric motors. Engineers from the California Institute of Technology and the Jet Propulsion Laboratory worked with Victor, New York-based New Scale Technologies to perfect the rotary motors, and these low-voltage modules are now being used in a variety of contexts, including medical instruments. 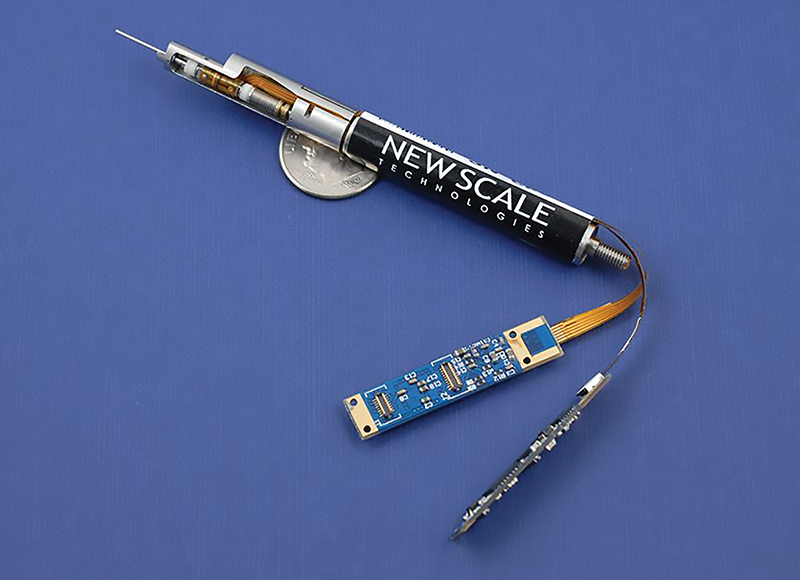 Each of nearly 2,400 fibers on the fiber-fed spectrograph must move independently and needs a range of motion that can cover any point on the image. New Scale Technologies designed and manufactured an extremely tiny, low-voltage positioner that combines two rotary motors. The company now uses the technology on many of its products, including ones that turn up in medical instruments, like a portable blood analyzer that tests for HIV. 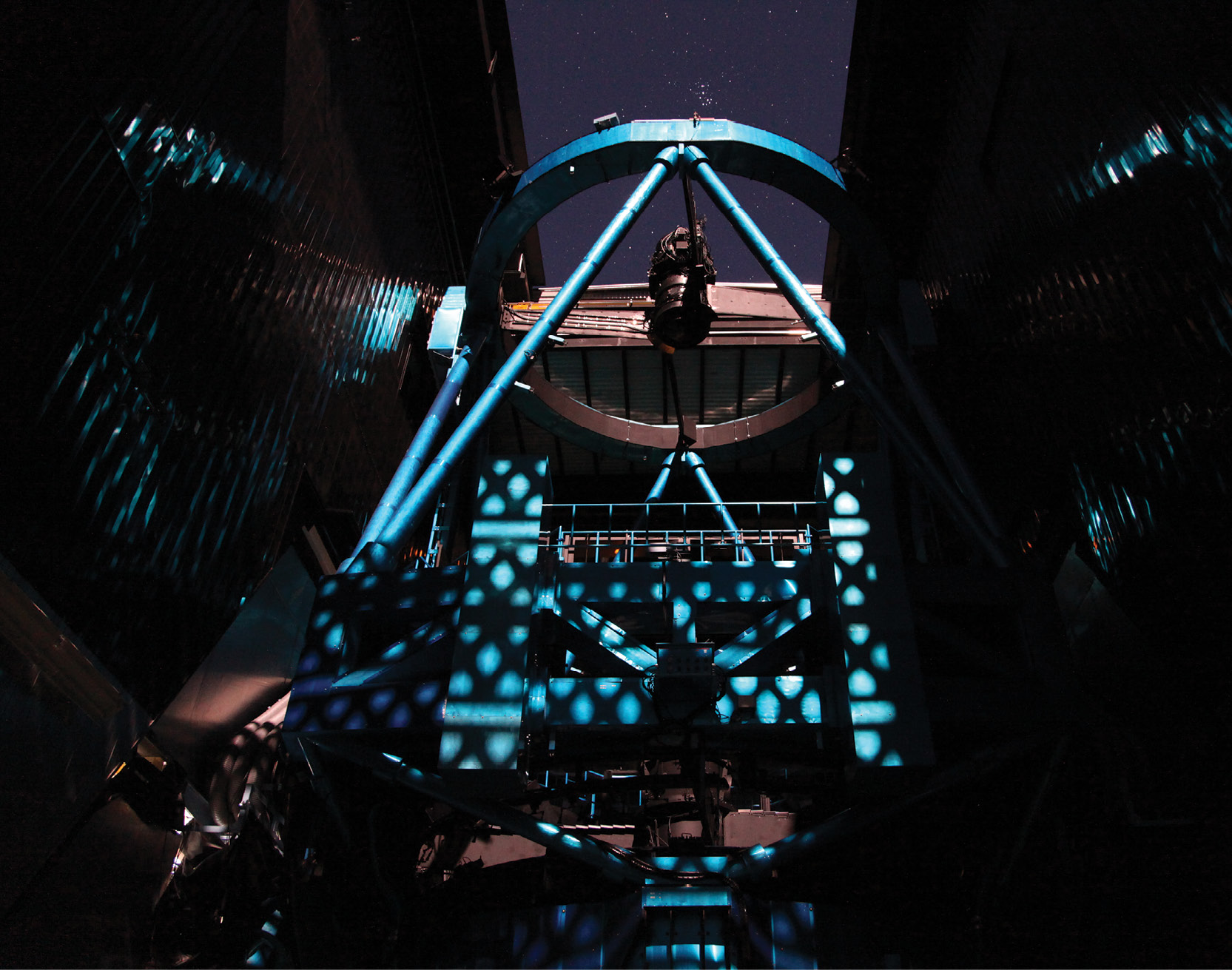 Scientists plan to add a new instrument to the ground-based Subaru Telescope in Hawaii that will help shed new light on the nature of dark matter and dark energy. The instrument, a fiber-fed spectrograph, measures the expansion of the universe by mapping the red shift of distant galaxies. Image courtesy of Hideaki Fujiwara - Subaru Telescope, NAOJ

Dark matter can’t be seen, but scientists observe its effects all around us. This composite image shows hot gas (pink) surrounding galaxy clusters, and the inferred position of dark matter (blue) through the effect of gravitational lensing.