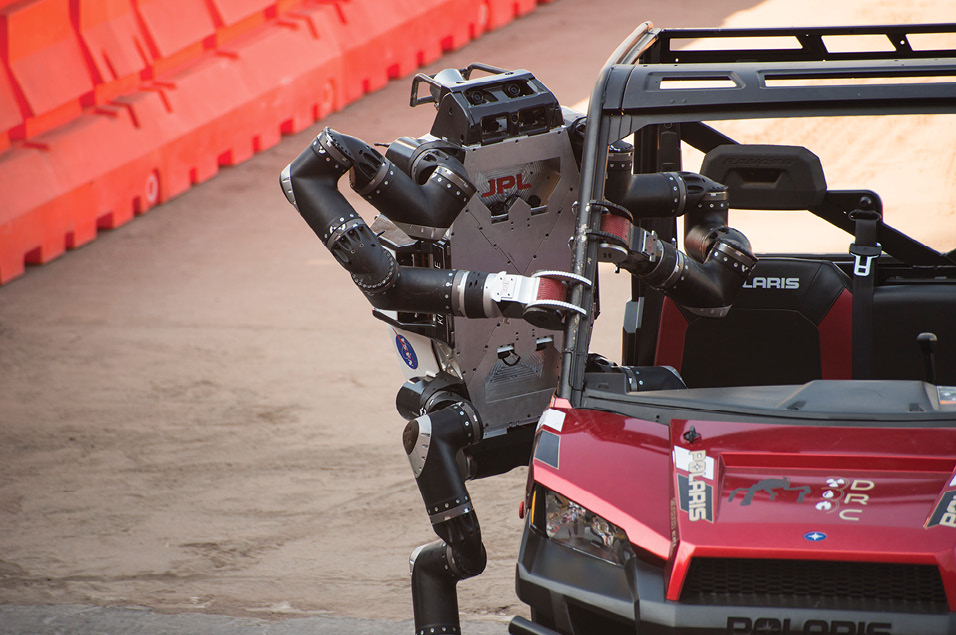 Moving slowly and deliberately, the robot picked its way over a pile of cinder blocks, testing and often reconsidering every step of its four black, tubular limbs, each bending and twisting at an unnatural number of knees and elbows. Though it never raised more than one leg at a time, the four limbs steadily worked together to shift the weight of its white, headless, tub-like torso until it eventually mounted and descended the heap to move on to other challenges.

“Slow is smooth, and smooth is fast,” says Brett Kennedy, head of the Jet Propulsion Laboratory (JPL) robotics team that built RoboSimian for the 2015 DARPA Robotics Challenge. The event called for automatons capable of carrying out disaster relief and rescue operations deemed too risky for human aid workers.

“The assumption is, you’re in an environment where you don’t get to make mistakes,” Kennedy says. “By being careful and moving without mistakes, we can execute the overall operation faster.”

While some other entries, especially two-legged models, suffered falls and struggled to right themselves, RoboSimian remained as steady as the metaphorical tortoise, always with at least three limbs anchored when it wasn’t sitting upright to roll on four wheels installed on its hindquarters and ankles. “We didn’t make a recovery-from-fall capability because we couldn’t figure out how to make it fall in the first place,” Kennedy says.

At the finals in Pomona, California, working with equal deliberation, the robot drove a vehicle, dismounted while clinging to the vehicle frame, cleared a path through rubble, cut a hole in drywall, and opened and navigated doors, among other challenges.

RoboSimian operates with “supervised autonomy.” For example, while it relies on a human operator to recognize a door and pick out the handle, it figures out for itself how to turn the handle and push or pull the door open. “The human’s never going to tell the robot to move this or that joint,” Kennedy says. “That’s basically math that the robot’s going to be better at than a human is.”

There are also way too many joints for an operator to work them all at once. Each limb has seven, because, ball-and-socket joints being difficult to build and control, one hinge/pivot joint is necessary for each of the six degrees of freedom in three-dimensional space, plus an additional one to allow for different positions of the limb that keep the hand in the same place.

The actuators that power the joints include brakes that let the robot hold long, awkward poses, helping to make it “patient,” meaning it can hold a position at low power if it needs to wait for an operator’s decision. Each joint also has the torque of an F-150 truck. “This is a robot that can do pull-ups,” Kennedy says, noting that it can hang from a single finger.

While it has no head, three sets of stereo cameras at one end of the torso can give the appearance of a face. Above them, a lidar device spins constantly, and two more sets of stereo cameras on its underside and one set on each side give it wraparound vision. While the lidar, which uses reflected laser signals to map the space around it, is highly accurate, it creates an incomplete picture. The stereo cameras present the opposite—a complete but somewhat inexact 3D image.

Combining the two technologies to give the robot accurate vision and enable autonomous navigation is an old trick for JPL engineers, one that was developed for Mars rovers in the 1990s. In fact, much of RoboSimian’s technology expands on and updates features of earlier JPL robots, such as the six-limbed LEMUR systems built in the late 1990s and early 2000s with space station construction and maintenance in mind, and the limbed and wheeled ATHLETE freight-carrying robots constructed soon after for planetary operations.

That’s not to say building it was easy.

“There were definitely a lot of hardware bugs,” Kennedy says, noting that trying to integrate, for example, an actuator with the encoder that plugs into it and the motor that spins beside it can produce unexpected results, which then require changes to the software. Commercial parts were often used in capacities they weren’t designed for. “Putting these systems together was an enormous challenge in and of itself.”

RoboSimian ranked fifth out of 23 robots in the competition.

Even before the finals, the California Institute of Technology, which manages JPL, made the entire robot available for license as a package.

The idea was not necessarily for a licensee to recreate RoboSimian but for it to enable new robot technology. For one thing, the robot was built with a modular design that would allow parts and systems to be rearranged. For example, JPL followed it up with the semi-humanoid SURROGATE robot that used one of the limbs as a spine to enable flexibility. The original robot was also packed with technology and solutions—actuators, sensors, simplified interfaces—that could be repurposed. “RoboSimian is a toolbox of technology,” Kennedy says.

Robotics company Motiv Space Systems, located not far from JPL in Pasadena, California, licensed the technology and started up a subsidiary, Motiv Robotics. While the company did sell one exact replica of RoboSimian to Duke University, its engineers, including two who did some work on RoboSimian at JPL and another who worked on robots at both JPL and Johnson Space Center, used it as a starting point for a next-generation version. That robot, the alternately five- or six-limbed RoboMantis, was unveiled at CES in January of 2018, after years of research and development.

“RoboSimian was designed for disaster response and working in hazardous areas. This is basically version 2.0 of that concept,” says Chris Thayer, president and CEO of Motiv Space Systems. The overall themes are still present, he says, such as stability, the modular design, and similar walking ability, stereo cameras, and lidar sensors, “but what’s under the hood is quite different.”

The most obvious difference is that, where RoboSimian gets around on all four of its identical limbs and then sits up to use its forelimbs to do jobs, RoboMantis takes the concept of stability even further, with four legs dedicated exclusively to mobility, each with a wheel on the foot. One or two additional arms, depending on the model, carry out the robot’s actual work.

The newer model is also thoroughly upgraded. Motiv created entirely new software with increased computational ability on the open source Robot Operating System, making it publicly available. RoboMantis retains RoboSimian’s modular design, but the team made the interfaces between modules quicker and easier to put together. The company designed its own actuators to power the robot’s joints, with even higher torque, based partly on limbs Motiv has built for Mars rovers.

The power system also had to be entirely rebuilt, as RoboSimian experienced a dangerous explosion due to thermal runaway in its lithium-ion battery. RoboMantis still uses lithium-ion batteries, but they’re off-the-shelf military models.

The newer robot uses a similar vision system of lidar and stereo cameras, although Thayer says it benefits from advances in stereo vision. Indeed, he says, RoboMantis takes advantage of upgrades that have been made across the board since its forebear’s construction. “Having that refresh in technology is important. New advances are made every year.”

While RoboMantis is an upgrade, it leans heavily on JPL’s work, says Brett Lindenfeld, vice president of operations at Motiv. “To do this from scratch without outside financing was unrealistic, so it made sense to leverage NASA’s investment,” he says. “They put millions of dollars into this over the years, and they demonstrated the utility of this configuration. That gets leveraged by us as we stand on its shoulders.”

The new robot’s first customer was Rutgers University, which received a five-limbed RoboMantis in early 2018.

But Motiv’s target clientele for the robot is any company or organization that does work in hazardous environments—from disaster relief to the oil and gas industry—where it can stand in for a human. For example, to clean the inside of a large chemical container, workers currently enter the container in protective suits, Lindenfeld says. “Instead, you could send the robot in, and RoboMantis can work like a Roomba.” Lindenfeld says the company’s engineers are developing tools like a power-washing attachment for the robot arms, according to the needs they hear from potential users.

Military applications like bomb disposal represent another possibility. Thayer says he hopes to see RoboMantis in chemical plants, power plants, oil fields, subterranean operations, and other industrial settings. Since its debut, he says, “we discovered pretty quickly a broad interest in this type of robot and what people want to do with it.”

He notes that the company might also end up selling pieces of the technology. For example, the military has expressed interest in the manipulators, while some others are primarily interested in the power system. “We show the total package to customers, and maybe they just need a subset of those capabilities,” he says.

But the primary goal is an off-the-shelf robot for industrial purposes. “We’re definitely hoping we can be the benchmark platform for mobile robots in a number of different fields,” Thayer says. “We’re hoping to supply these by the tens and even hundreds, and I think that’s certainly a possibility, given the conversations we’re having today.”

Kennedy says his team at JPL is excited to see a new version of its robot make its way out into the world. “We’ve been building robots for a pretty long time, but something we haven’t done much is push the technology for commercial and terrestrial use,” he says. “Hopefully, this gives us another way of helping out the Nation by being able to feed technology to our companies.”

Abstract
A rugged robot built at the Jet Propulsion Laboratory (JPL) has been adapted by Pasadena, California-based Motiv Space Systems into the five- or six-limbed RoboMantis, which could take over dangerous jobs in disaster zones or hazardous areas. JPL’s version built on decades of robotics experience for Mars rovers and more to give the modular robot accurate vision and enable semi-autonomous navigation. Motiv has upgraded the software and tweaked the design and says the robot can carry out hazardous jobs like cleaning chemical containers or bomb disposal. 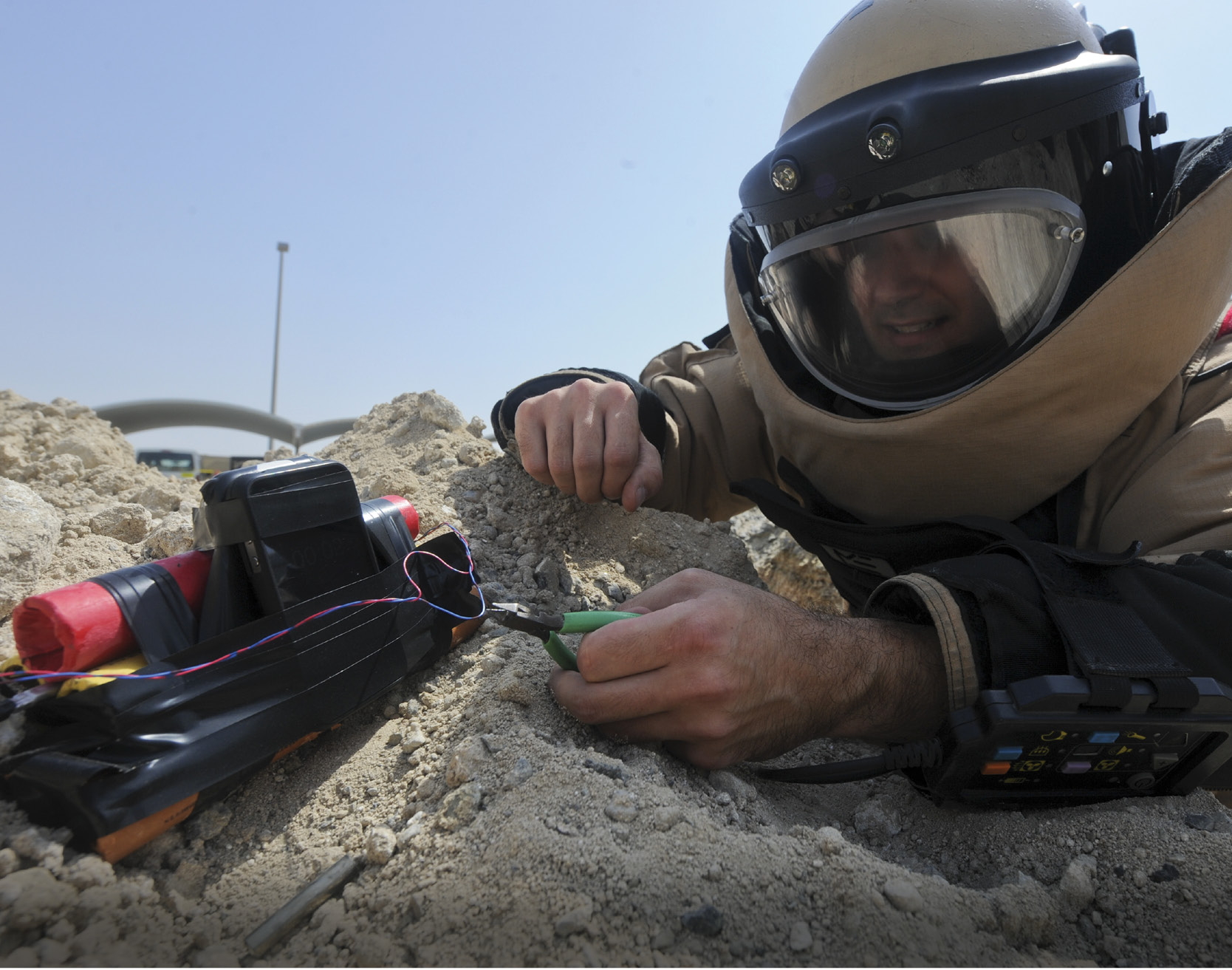 Bomb disposal is just one dangerous job RoboMantis could take off of human workers’ hands. The company hopes it can stand in for people in dangerous emergency rescue, oil and gas, chemical handling, mining, and other operations that pose significant risk to life and limb. Image courtesy of the U.S. Air Force 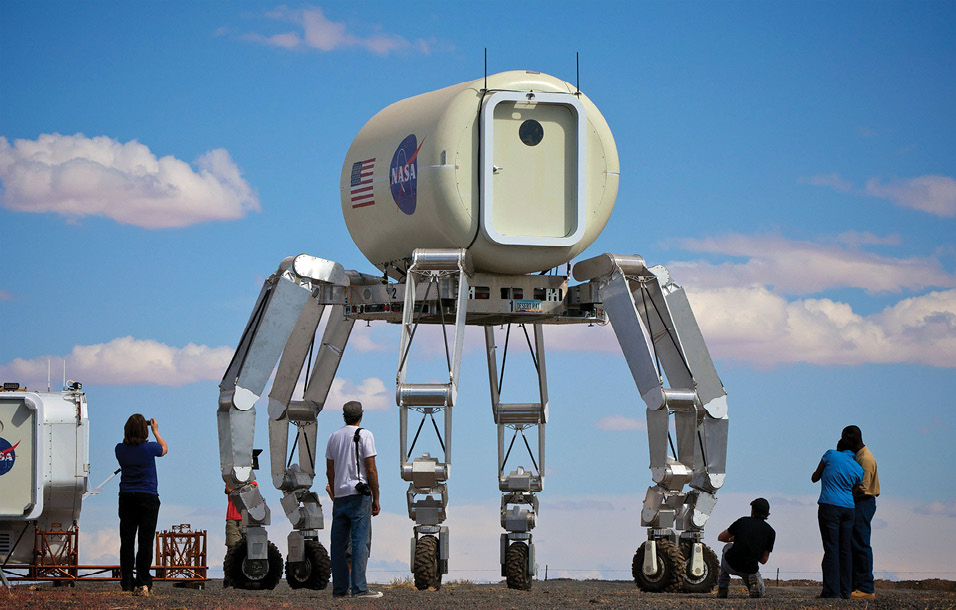 Much of the technology and expertise behind RoboSimian came from JPL’s long history of building robots, such as the versatile, limbed and wheeled ATHLETE freight-carrying robots designed for planetary operations. 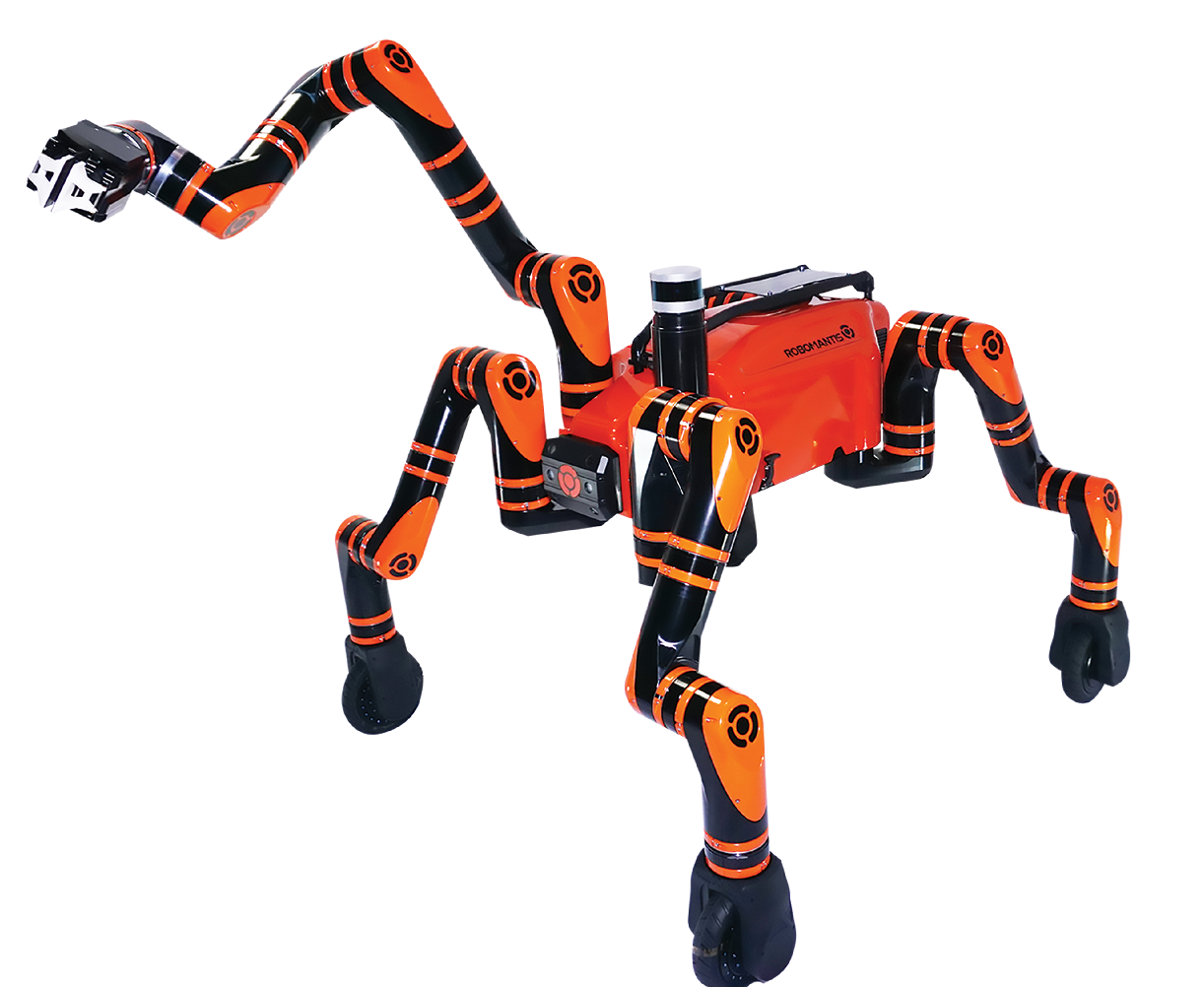 Motiv Robotics’ RoboMantis is based on the company’s license for JPL’s RoboSimian but represents updates to most of the systems, components, and software. With four legs on wheels and either one or two arms capable of wielding various tools, the robot is intended to carry out jobs that are hazardous to humans.

Jet Propulsion Laboratory (JPL) engineers built RoboSimian to compete in the 2015 DARPA Robotics Challenge, where it had to perform tasks like clearing a path through rubble, traversing a heap of cinderblocks, and driving a vehicle. Even before the competition’s final rounds, the entire robot was available for license as a package.