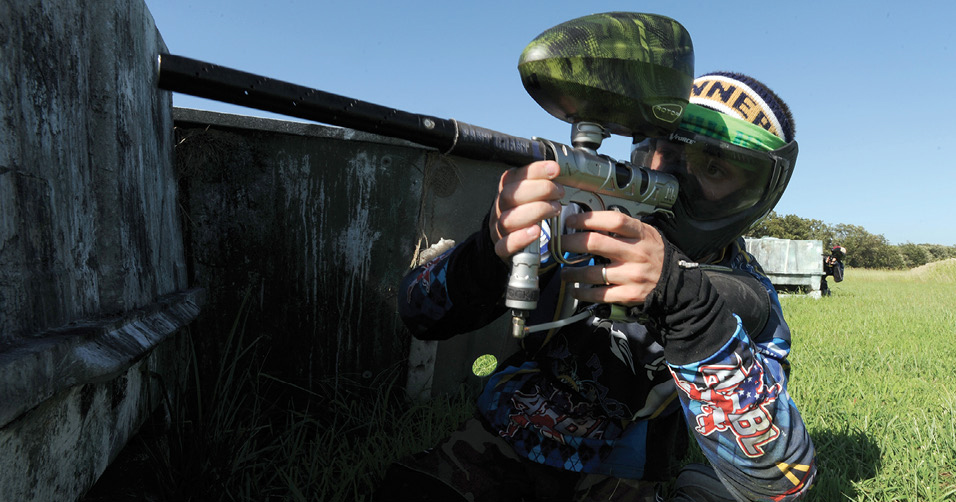 Wrapped Tanks Cut Weight on Everything from Buses to Paintball Guns

What do naval anti-missile guns, infant incubators, the Phoenix Mars lander, and high-end paintball guns have in common? All these technologies—and many others—employ an invention developed at NASA in the 1960s and ’70s to cut weight from the planned Space Shuttles.

The invention was a tank design that could safely store gases and liquids at higher pressures than previously possible. Known as composite overwrapped pressure vessels (COPVs), they comprise a liner—usually metal but sometimes plastic—tightly wrapped in high-strength filament embedded in resin, and they can weigh around 50 percent less than the all-metal pressure tanks that are still used where saving weight and space is less important than saving cost. The higher pressure allows the same amount of gas to be stored in a significantly smaller cylinder.

While the concept is simple, developing and testing the tanks was not. Scientists at Lewis Research Center, now known as Glenn Research Center, spent years exploring different combinations of liners, fibers, and resins, as well as various winding patterns and testing methods. But these were not just NASA researchers.

From 1963 to 1965, the Douglas Aircraft Company was contracted to investigate the structural properties of filament-wound pressure vessels. A follow-on contract with Aerojet General Corporation continued the investigation into the use of thin metallic liners in glass filament-reinforced pressure vessels. In 1971, four of the Aerojet engineers involved formed their own company, Structural Composites Industries (SCI), to continue the work under contract to Lewis. SCI would go on to become the first company to manufacture the composite pressure tanks for commercial use.

Due to the interaction of liners and fibers, failures in these tanks are harder to predict and address, and nondestructive testing methods traditionally used to evaluate pressure vessels, such as ultrasonic thickness measurement, were not sufficient. Extensive burst testing—filling the vessels to see when and how they failed under different conditions—was carried out on various designs at Lewis. SCI also created a computer program to design and analyze the vessels, calculating stresses and strains at various pressures over their lifetimes and establishing optimum physical characteristics based on capacity, temperature, and weight requirements.

Each Space Shuttle ended up incorporating 24 composite vessels supplied by General Dynamics, another early COPV manufacturer, to store pressurized helium and nitrogen, for propulsion and life support, respectively. They saved a total of 752 pounds per Shuttle, compared with all-metal tanks.

In 1970, Kennedy Space Center hosted a Technology Utilization Conference to determine how NASA might help meet the needs of municipalities. Improved firefighters’ breathing systems were targeted as an area of need—the rate of respiratory injury among firefighters was on the rise—and NASA’s expertise in life-support systems promised a solution. Based on input from fire departments, it appeared that firefighters too often chose not to use their breathing equipment because it was cumbersome and restricted movement.

Central to the problem were the size and weight of systems’ steel pressure vessels. Several alternatives were considered, and engineers settled on an aluminum liner wrapped in fiberglass filament as the best replacement. Johnson Space Center managed the project, and SCI was one of two companies Johnson contracted in 1972 to supply the cylinders. A typical composite cylinder the company created under the program weighed 26 pounds and could hold as much air as a 41-pound steel cylinder. This was because it stored air at 4,000 to 4,500 pounds per square inch gauge (psig), about twice the 2,215 psig typical of firefighters’ breathing systems.

Boeing soon used SCI’s composite cylinders to save 200 pounds on its 747 airliner, where they stored the gas that would fill inflatable escape chutes in the event of an emergency (Spinoff 1977), another use that is now commonplace. SCI led the commercial composite overwrapped pressure vessel industry for years after, finding an ever-growing array of applications for the lightweight, high-pressure tanks. The company was purchased by Worthington Industries in 2009, but its production facilities, still located in Pomona, California, remain among the leading manufacturers of this NASA-invented technology.

What was SCI’s main product is now a small part of Worthington’s diverse business, but the company sells 60,000 to 80,000 composite pressure vessels per year, ranging in size from 2 by 8 inches to about 2 by 10 feet, says Daniel Orton, product manager at Worthington. “They’re just everywvhere. It kind of boggles the mind sometimes.”

Manufacturers still wrap the cylinders in fiberglass filaments, as well as Kevlar, and carbon fibers developed in the 1990s can reduce weight by an additional 20 percent.

Besides inflating the escape chutes on virtually every airliner in the sky, composite pressure vessels now hold the oxygen for the planes’ emergency breathing systems and the gas that ejects their landing gear in case of emergency.

On helicopters, they hold air for pilots to breathe and, in emergency situations, to blow doors open and inflate emergency floats.

Among the most common applications—and the largest tanks—are the pressure vessels that hold compressed and liquid natural gas for fuel on buses and other vehicles. Worthington’s composite tank customers include bus manufacturers Bluebird and Gillig, as well as UPS, Chevrolet, Honda, and other vehicle producers. In 2017, the company developed a 10,000-pound-per-square-inch tank for hydrogen-powered vehicles.

The lightweight tanks are also popular for military applications. The British Royal Navy saved 1,500 pounds per ship by replacing the steel cylinders on its minesweepers with Worthington’s composite cylinders, and the air-powered Phalanx guns used by the U.S. Navy and others to shoot down missiles at close range are pressurized with the cylinders. Sounding rockets use them for inertial control in their guidance systems. The Naval Research Center’s first hydrogen fuel cell-powered drone, the Ion Tiger, uses Worthington composite tanks, and the AAI Shadow military drone uses them to power its takeoff slingshot.

“They got real popular about 10 years ago, even for paintballers,” Orton adds. “They can go shoot each other all day long with that much pressure.”

Composite pressure vessels are commonplace in the space industry where they originated, and where weight and volume are always primary concerns. Helium-filled composite tanks are often used to pressurize fuel tanks in space systems, as Worthington’s do on the Antares rocket, the Phoenix Mars lander, and several others. They’re also found in the Ariane 5 rocket’s ignition system and the Falcon 9’s landing legs. On the International Space Station, they’re in the gas detection system and also inflate Bigelow Aerospace’s Expandable Activity Module.

Countless companies and end users have benefited, Orton says, because “NASA asked, ‘Is it possible to make a lighter-weight cylinder than we have now?’ And they came up with this solution.”

Abstract
What do infant incubators, a Mars lander, and paintball guns have in common? All employ an invention developed at Glenn Research Center to cut weight from the Space Shuttles. Composite overwrapped pressure vessels, made of a liner tightly wrapped in high-strength filament, weigh half as much as all-metal pressure tanks by safely storing gases and liquids at higher pressures than was previously possible. Today, Worthington Industries, with production facilities in Pomona, California, sells them for, among many applications, fuel tanks for buses and breathing systems for firefighters. 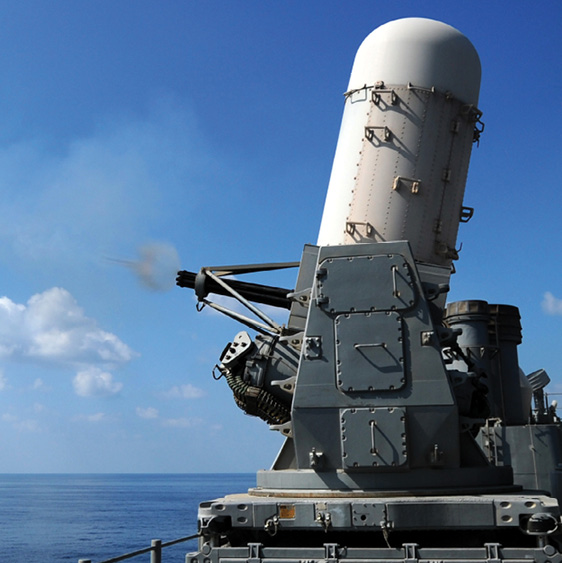 High-powered Phalanx guns, made to shoot down incoming missiles at close range, are powered by huge COPVs. Image courtesy of the U.S. Navy 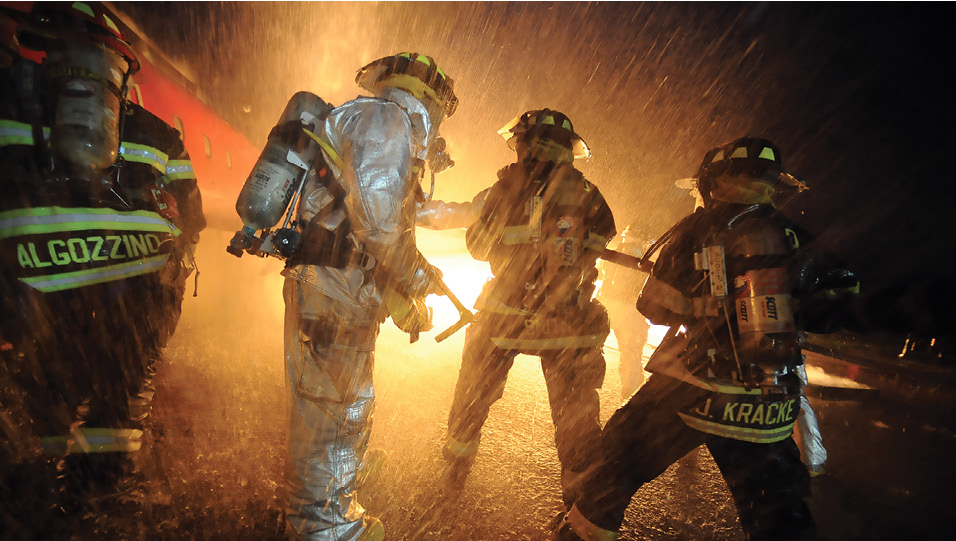 One of the first applications for COPVs outside NASA was for the tanks in firefighters’ breathing apparatuses, making them significantly smaller and lighter. Image courtesy of the U.S. Air Force