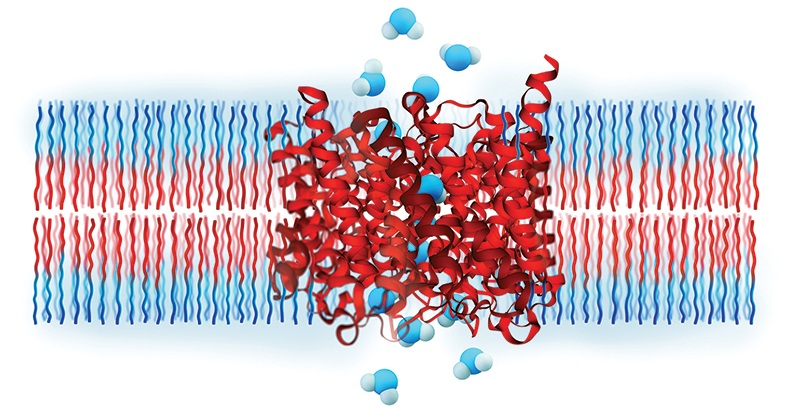 When trying to solve a tough problem, it’s not unusual for engineers to turn to nature for a solution.

“Nature is our biggest R&D lab. Whatever discoveries nature has made, they’re quite efficient,” says Peter Holme Jensen, CEO and cofounder of the company Aquaporin A/S.

One problem NASA has faced since its early days is the need to filter water efficiently. Given the great cost of ferrying water into space, as much moisture as possible has to be recycled into drinking water aboard spacecraft. On the International Space Station (ISS), every drop of moisture, from humidity to urine, is filtered, purified, and reused. But the current system relies on heavy filtration beds that weigh down resupply missions and have to be swapped out every 90 days. It also fails to filter out certain semivolatile contaminants.

A chance encounter at a seminar in 2007, where Jensen met Michael Flynn, lead for the Advanced Water Recycling group at NASA’s Ames Research Center, introduced a possible solution. Jensen and colleagues had been working to develop a water filtration system based on aquaporins—the proteins that all living cells use to transfer water through their membranes.

Aquaporins enable plant roots to absorb water from soil and human kidneys to filter about 45 gallons of fluid per day, for example, and they come in hundreds of varieties.

“They’ve evolved over billions of years of life to carry out specific functions,” Flynn says. “These proteins are great because you can pick them out and use them for what you want.”

Moreover, he adds, they’re highly selective, meaning only water passes through and not contaminates.

By the time Jensen and Flynn met, Aquaporin A/S had been founded in Copenhagen, Denmark, but the team was still struggling to incorporate the proteins into a viable film for filtration.

“They were basically a bunch of kids who wanted to come here and do some testing, and it sounded like a good idea,” Flynn recalls, noting that NASA had plenty of data on existing water filtration systems for the Aquaporin team to run comparisons.

He ordered some prototypes with funding from the Agency’s Next Generation Life Support project.

It took three more years, but in late 2010, Aquaporin arrived at Ames with test prototypes.

The company works with two basic types of filter—one for reverse osmosis, which uses pressure to push fluid through a filter, and one for forward osmosis, which operates without any energy or outside influence. In forward osmosis, with polluted water on one side of a membrane and saltwater on the other, the physics of entropy dictate that the salt spread evenly through all the water. But since the salt can’t pass through the membrane, it draws all the water from the other side of the membrane, leaving only pollutants behind. To purify water for drinking, sugar has the same effect.

This is what NASA is ultimately interested in, and it’s what Aquaporin built for Ames and successfully tested over the course of three years, using sugar water to extract clean water from urine. With life-support systems as one of its primary missions for decades, Jensen notes that Ames even has its own urine collection center, although he adds, “It’s not real astronaut urine—it’s just NASA Ames employees.”

The tests confirmed that the prototype Aquaporin membrane outperformed the system used on the ISS, including removing most semivolatile compounds.

Further tests on the space station, sponsored by the European Space Agency (ESA) but overseen by Flynn, have proven the technology works just as well in space and that the proteins are stable enough to last at least a year—the longest test so far, he says. “There’s been no change in performance—it’s been rock solid.”

Testing on the ISS used the hollow-fiber membrane Aquaporin developed for forward osmosis, but it was tested using both forward osmosis and pressure-driven reverse osmosis. NASA is considering replacing the filtration beds on the existing water purification system, which operates in reverse osmosis, with an aquaporin membrane. In the future, though, the Agency would like an entirely new, forward osmosis-driven system.

In 2014, as the original Ames work was wrapping up, the company perfected its formula and started moving toward industrial production. The trick hadn’t been producing the proteins, says Jensen, but embedding them in a membrane. “That was what it took 20 people eight years to figure out.”

The company now sells household under-sink modules made with its Tap Water Reverse Osmosis Membrane, to distributers abroad, especially in China and India, where Jensen says there is a huge market forwater purification. Globally, he says,water filters represent a $27 billion market.

He says the reverse osmosis products filter water about twice as fast as other existingpurifiers, due to the proteins’ efficiency. They also nearly double the water recovery rate. Insystems, 70 percent or more of the water is used just to clean contaminants off the back of the membrane. “It’s not millions, it’s billions of liters of water that are wasted on a daily basis,” Jensen says, noting that many of the places that require water purification are also among those with the highest stresses on water supply.

The company is working on membranes that can use reverse osmosis to desalinate seawater at higher efficiency and lower cost than existing technology, and it’s also investigating the use of forward osmosis for desalination.

But Aquaporin mainly has industrial uses in mind for forward osmosis, such as treating wastewater in the oil and gas, food and beverage, dairy farming, and textile industries, among other businesses that generate large amounts of highly polluted wastewater.

The company is partnering with more than 50 wastewater treatment companies that have purchased and are pilot-testing forward osmosis membranes and considering new, industrial-scale systems built around them.

“This is where we are really pioneering on a totally different level and can change the water purification landscape completely,” Jensen says.

Systems built with Aquaporin Inside Forward Osmosis products can eliminate pre- and post-treatment steps. In animal farming, the membranes’ high selectivity lets them recapture urea from wastewater for fertilizer. In the pharmaceutical industry, they can trap active ingredients that other systems can’t, and they can even be used to collect virus particles for vaccines.

The new Aquaporin A/S production facility is equipped to produce 2.5 million square meters of membrane per year, for both forward and reverse osmosis. The company now has more than 100 employees.

Jensen says NASA’s patronage was especially important to developing forward osmosis membranes, which have a longer path to the mainstream market and therefore are less attractive to investors. “They’re not afraid to make the first move,” he says of the Space Agency.

“We do research in areas the private sector doesn’t want to for whatever reason,” Flynn says, noting that the established membrane industry has little incentive to develop products that need to be replaced only rarely, if ever.

His branch at NASA’s Ames Research Center hopes to eventually turn Aquaporin’s work into a product that will never need replacing, because it will heal itself. By genetically engineering bacteria to produce aquaporin proteins in a lipid membrane, NASA could create a forward osmosis filter with the resilience and regenerative power of the small intestine, he says. “You can really do horrible things to the intestine. You can swallow a paper clip, and it will fix itself.” The technology is still 10 to 30 years from feasibility, though.

He says Aquaporin, one of a handful of companies now manufacturing proteins for commercial use, is part of a movement that will pay off sooner than that. “Aquaporin is an example of a really interesting trend in technology right now—the ability to manufacture biological machines, or biomimetics.”

While companies have used proteins, for example, to make drugs or raw materials, Flynn says, “In the commercial sector over the next 10 years, you’re going to see a dramatic transformation, where they’re going to start making biomimetic consumer products”—like Aquaporin’s Tap Water Reverse Osmosis Membrane, which, he notes, is basically “a kidney to put under your sink.”

Abstract
Aquaporin A/S, based in Copenhagen, Denmark, approached Ames Research Center in 2007 with a proposal to create filters by infusing membranes with aquaporins, the proteins that let water in and out of living cells. With Ames funding and testing and eight years of development, the company released under-sink reverse-osmosis filters that clean water twice as fast as existing technology, with twice the recovery rate. Aquaporin sees a bigger future market for filtering industrial wastewater using highly efficient forward osmosis. 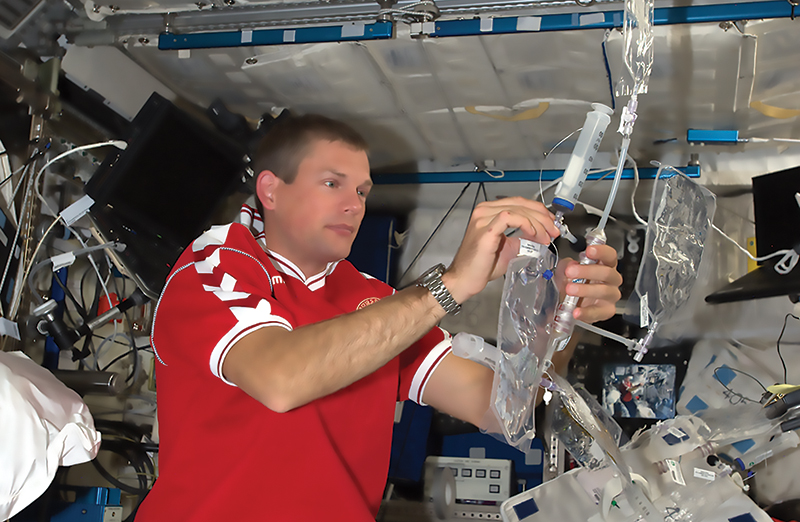 Danish company Aquaporin A/S is making a line of forward osmosis-based water filters available. The company hopes the technology will radically change industrial water purification, eliminating pre- and post-treatment steps, with membranes that rarely if ever need to be replaced. 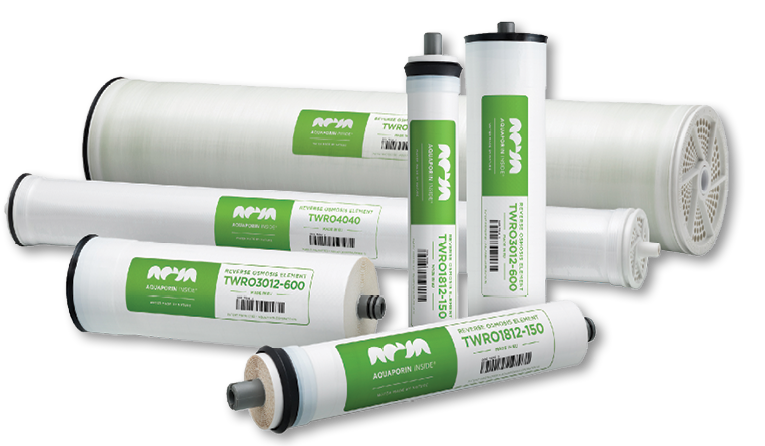 Aquaporin A/S has a line of reverse osmosis-based under-sink water filters available through distributors primarily in India and China.

Aquaporins are proteins found in the membranes of living cells. Most allow water—and only water—to pass through the membrane, conducting water molecules from one side to the other rapidly but in single file. The first image of an aquaporin was taken in 1999. Image courtesy of Vossman, CC BY-SA 3.0