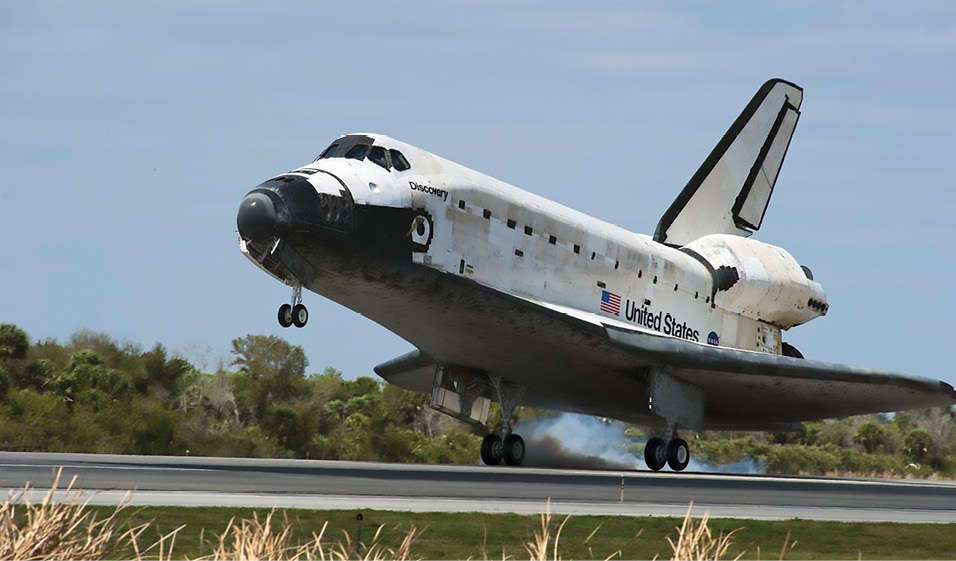 How many people can think of a time when they got to their destination only to realize one of their car tires was dangerously low on air? Or they heard an ominous pop on the highway, only to realize an undetected slow leak had turned into a blowout?

It’s something that should be happening less these days, thanks to tiny sensors that light up a dashboard warning whenever the tire pressure is off. The fanciest models can even give a real-time pressure reading for each tire.

But the earliest versions of those sensors had a much bigger purpose: ensuring the tires on the Space Shuttles were fully inflated and safe for landing. The Shuttle had four rear tires, two under each wing, and if even one was low on air during landing, it would be a “very bad day,” says Steve Sebesta, a Kennedy Space Center flight engineer.

“If one was flat, the other tire on that side would blow, then you would have two blown tires,” he explains. “Then you’d roll on the rims until they were destroyed. You’d be yawing to the right or left, toward the side that had the tires no longer inflated, and eventually roll right off the runway. A very bad day.”

Luckily, he says, “in the history of the program, we only ever had one tire go flat, and it happened when we were almost completely stopped.” That was in the 1980s, Sebesta recalls, before there was really any way to monitor tire pressure during flight. There was an externally mounted strain gauge, he says, but it only gave a very rough estimate of pressure—enough to know if the tire had completely gone flat but not accurate enough to alert pilots if the pressure was simply low.

Instead, the Shuttle engineers relied on extensive pre-flight ground testing to mimic flight conditions over long periods of time and learn the rate at which the tires lost air, so they could prepare the tires with enough margin to be safe during landing.

Sebesta was part of an effort in the late 1990s to redesign the Shuttle tires to make them significantly stronger and able to withstand greater speeds and crosswinds, and that project included designing an upgraded pressure sensor for the new tires. But even before that, NASA had built a much more accurate sensor for the Shuttle tires, thanks to a partnership with a then-start-up called NovaSensor, which aimed to give the astronauts and ground control an accurate picture of tire pressure before descent, to help ensure there were no ugly surprises.

In the 1990s, NovaSensor, now part of the much larger St. Marys, Pennsylvania-based Amphenol Advanced Sensors, was a few years old and building a name for itself in microelectromechanical systems, or MEMS, sensors. That’s just what it built for NASA: a pressure sensor based on MEMS piezoresistive technology, which converts pressure to electrical resistance, explains senior sales manager Mark Ready.

The sensor was built on a small silicon chip. “As pressure is applied to one side of the chip, that creates strain in the silicon,” he says. When tire pressure got low, the strain would change, creating a proportional piezoresistive change that generated a tiny amount of electricity, measured in millivolts, signaling the problem.

“At the time, it was a very innovative way to measure pressure,” Ready emphasizes. When NASA approached the company, “it was a technology that was pretty core to our capabilities,” but it required a fair bit of work to make a fully operational sensor ready to work on tires. One of the biggest challenges, he says, was figuring out the best way to mount the chip within the tire without imposing any external strain. For example, if the adhesive is stiff and expands in heat at a different rate than the sensor itself, that could create a stress that interferes with the pressure reading.

The company also had to package the MEMS sensor into a complete device that was powered by a small battery and sent results via radio frequency. And although NASA only needed a handful of the finished sensors for its Shuttles, Ready says the company already envisioned a much wider market, especially for automotive tires.

The Shuttle tires were originally based on aircraft tires and have significant differences from the all-weathers on a typical sedan. For one thing, Shuttle tires are massive: some four and a half feet in diameter, Sebesta says. For another, the air pressure required is an order of magnitude higher: while a typical car tire generally needs 35 to 45 pounds of pressure per square inch (psi), the original Shuttle tires needed 350 psi.

But when it comes down to the job of a tire pressure sensor, there wasn’t much the company needed to change. They needed to scale up the manufacturing infrastructure to be ready to produce millions of parts instead of the dozens required by NASA and make some external design work to create a few choices for customers, Ready says. But otherwise, “we didn’t have to do much beyond that to turn it into a commercial product. It’s essentially the same as what we delivered to NASA.”

The company has since sold many millions of the pressure sensors, and the vast majority of them went on U.S. passenger vehicles, as well as on “run-flat” tires for the U.S. market. “Run-flat” tires allow the driver to keep going for up to around 50 miles on a punctured tire without causing a blowout, Ready explains, and pressure sensors ensure the driver knows to head in for service.

Today, U.S. law mandates a pressure gauge on every car tire, and that’s because of the increased safety that pressure sensors like these enable. Just like on the Shuttle, if one of four car tires starts to go flat, it could cause “a catastrophic situation where the tire could fail and cause a potential accident,” says Ready.

And even when the pressure isn’t low enough to cause a blowout, he notes, low tire pressure makes the car run less efficiently, which means it’s using more fuel and wearing through the tires faster.

Amphenol continues to sell the NovaSensor P1602, which, though it has received some upgrades, is still essentially the same product it created 25 years ago. The tire pressure sensor is no longer a huge part of Amphenol’s business, as the company has moved on to more cutting-edge work and competitors have crowded the scene, but “we were the leader with it,” Ready emphasizes.

The tire pressure sensors, he says, “definitely played a critical role—it helped us turn the corner in terms of becoming a real company.”

Abstract
A flat tire can take drivers by surprise. This was something the Space Shuttle engineers at Kennedy Space Center worried about, too. In the 1990s, NASA commissioned a miniature pressure sensor on a silicon chip, powered by a small battery, that alerted pilots if the pressure was low. St. Marys, Pennsylvania-based Amphenol Advanced Sensors adapted the sensor for car tires and sold many millions, most of which ended up on U.S. passenger vehicles. 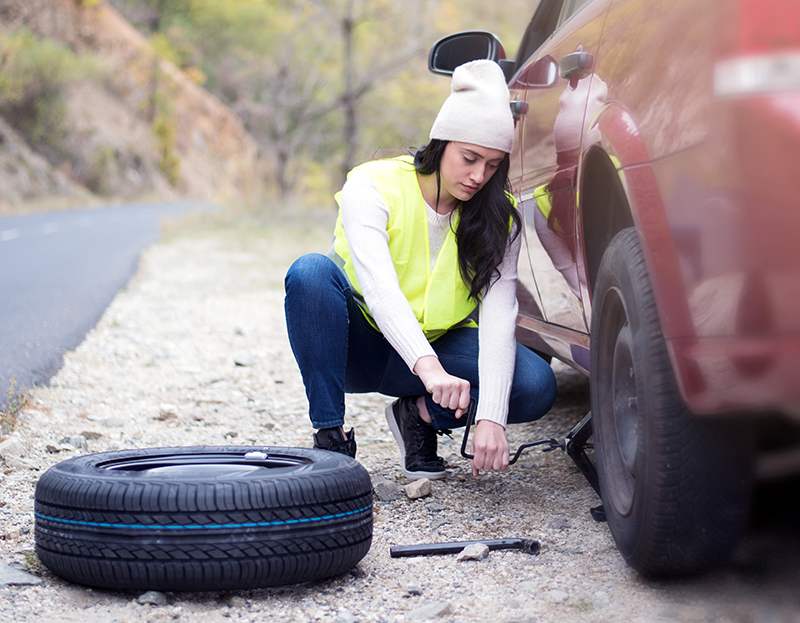 NovaSensors, (since acquired by Amphenol Advanced Sensors) was contracted to build a tire pressure sensor for the Shuttle. The company used MEMS piezoresistance technology, which converts pressure into electrical resistance, powered by a small battery, that sent readings via radio frequency. After it delivered to NASA, the company adapted the sensors for passenger vehicles, ultimately selling many millions of the device. 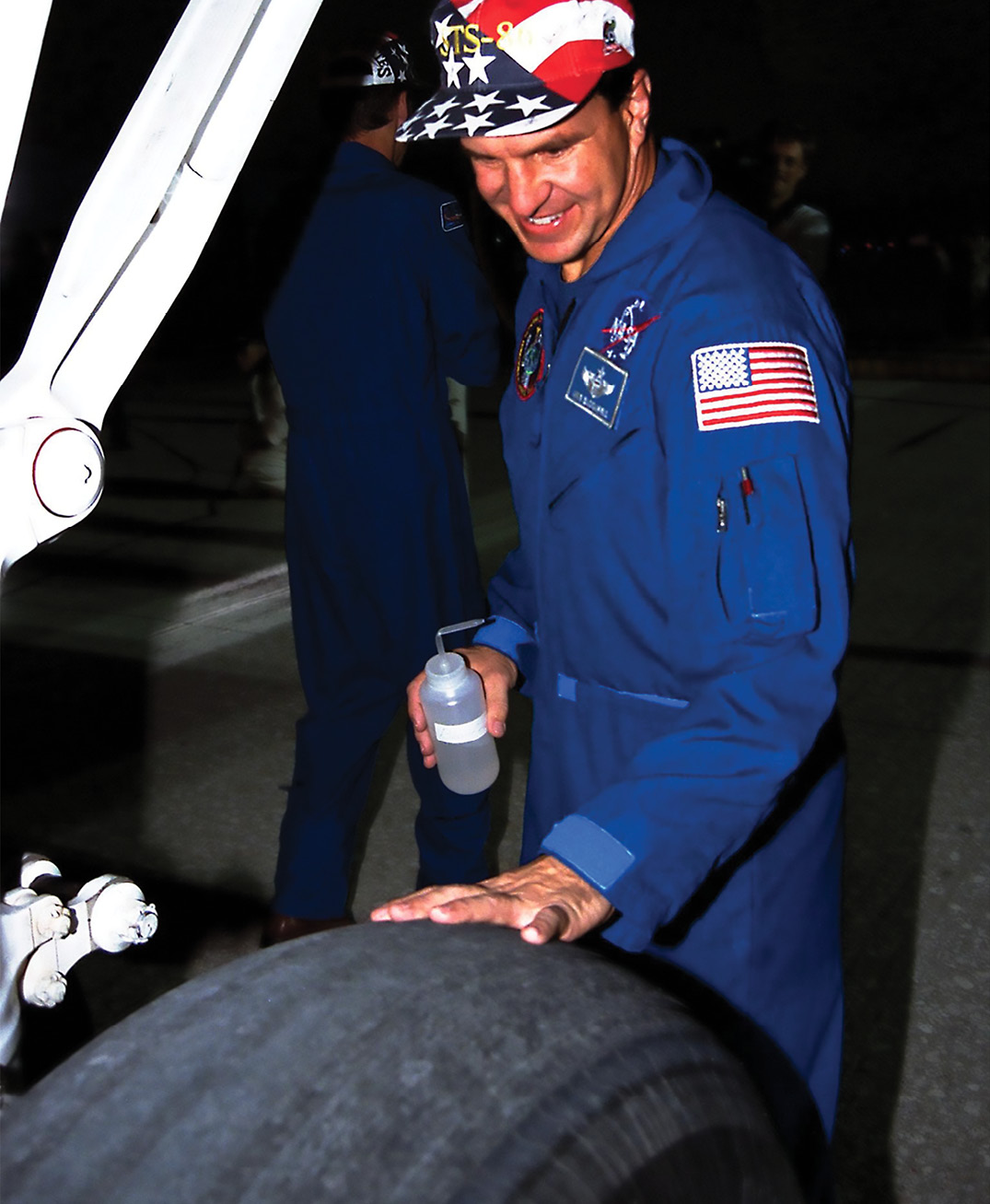 Astronaut and pilot Michael Bloomfield feels the heat on the tires more than an hour after landing, following a 1997 flight. The friction from the runway used to wear the treads off the tires, leaving a narrow margin between safety and a potential blowout. Later redesigns aimed to improve the tire durability as well as add sensors to constantly monitor tire pressure.

Proper tire pressure is crucial for a safe landing, but in the early days of the Space Shuttle Program, there was no good way to accurately gauge pressure in flight. Instead, engineers relied on extensive pre-flight ground tests to measure air loss over time.