When Aloha Airlines Flight 243 made an emergency landing on Maui in April 1988, much of its upper fuselage was missing, leaving passengers entirely exposed to the elements. Remarkably, only one person, a flight attendant, died in the incident.

“The aircraft’s roof had blown away in a way that everybody thought was not possible,” says Carlos Davila, a senior research engineer at NASA’s Langley Research Center. The Boeing 737, though nearly 20 years old, was designed to resist this type of cracking, and it was unclear how the damage occurred.

Researchers at Langley tasked with supporting the aerospace industry got to work running all the information they had on the Aloha accident through their various modeling software systems. They created models of the fuselage joints using the Structural Analysis of General Shells (STAGS) code that was being developed by Lockheed Martin under a contract from Langley. New failure criteria developed in the laboratory were applied to the computer models to understand how small cracks could link up and compromise the structural integrity of the aircraft.

At the time, a variety of software development teams were in the process of greatly improving finite element analysis, which enables analysis of complicated structures by subdividing them into smaller sections—called finite elements—like a mosaic. Once the simpler engineering problems are solved for each smaller section, the results are stitched back together to get a better picture of the whole.

NASA has contributed significantly to developing finite element method software systems since the 1960s. Advances in the 1980s with STAGS, for example, resulted in major improvements to the analysis of complex structures like an airplane wing or fuselage, parts of which might bend or buckle to create sudden reactions, sometimes in multiple locations simultaneously.

“At the time, there was a lot of effort at Langley on damage models and crack propagation,” Davila recalls, noting that the researchers at NASA and elsewhere weren’t just working with STAGS but also other finite element analysis software suites. “It was a time when the nonlinear tools were maturing,” he says, referring to nonlinear finite element analysis, which models the strength and behavior of materials even as they undergo significant structural changes such as deformation, straining, and cracking.

“It was a good time to influence both the software vendors and the companies that needed these tools,” he adds.

A little more than a year after the Aloha accident, the National Transportation Safety Board issued a 258-page report concluding that Flight 243’s fuselage damage began in a lap joint on the left side of the aircraft as a result of multiple-site fatigue cracking that undermined the fail-safe characteristics in the aircraft’s design.

The event was a warning to both the aviation industry and the public about the dangers of aging aircraft and the need to better understand how aircraft respond to stress over time. Finite element analysis was needed as much as ever to simulate how structures would respond to stress and eventually fail, and developers continued to improve their software suites significantly throughout the 1990s.

By the early 2000s, finite element analysis had come a long way, but so had the materials engineers were building with. The aerospace industry, in particular, was moving toward lightweight composite materials instead of metals such as aluminum and titanium alloys. The change had significant implications for failure analysis: because these newer materials are more brittle, they are susceptible to delamination, and they fracture in a combination of different failure mechanisms that are not experienced by traditional metallic structures.

Developers working on Abaqus Inc.’s finite element software suite, which had been around since 1978, began a major upgrade to incorporate the advances of the previous decades with a focus on fracture and failure, especially of composite structures.

At the time, manufacturing processes were getting more complex and expensive, as were the physics problems faced by engineers working with the increasingly complicated materials. “So there was a tremendous interest in proving the ability to simulate some of these structures from beginning to end in a code like Abaqus,” says Dale Berry, senior technical director at SIMULIA Marketing, which Abaqus now falls under.

French software company Dassault Systèmes bought Johnston, Rhode Island-based Abaqus Inc. in 2005 and continued to develop the software under its then-new SIMULIA brand, along with other simulation products. As part of the upgrade, SIMULIA developers formed and met regularly with a Fracture Customer Review Team, which consisted of Abaqus customers—including NASA—and others who were interested in seeing the product develop. Many of the capabilities of the STAGS code were added to Abaqus over time.

“We met as a team for many years as the effort matured,” says Berry, noting that NASA and some of the STAGS development crew were active participants in these meetings, which continued through 2015.

“The spirit was to come talk about what’s working, talk about what’s next, how to prioritize, and really try to let us, on the Abaqus side, know what our next steps should be,” Berry says. “Once the code was delivered, perhaps the next year, they would be very involved in helping test it and make sure the capabilities met their needs.”

These NASA-Abaqus interactions continued with varying degrees of formality. In some cases, Abaqus developers might have merely read a paper by NASA researchers, and in other cases, NASA researchers developed benchmark problems to compare Abaqus’ upgraded capabilities to analytical solutions or solutions from other codes.

The relationship continues to this day. Abaqus developers are now part of NASA’s Advanced Composite Project, a consortium of industry and other partners who participate in weekly teleconferences to articulate their needs or discuss how software advances might be implemented.

“We have always been in communication with the Abaqus team,” says NASA’s Davila, who still uses the software every day.

Today, Abaqus finite element analysis software is used in a host of industries in addition to aerospace. Engineers have used it to develop and optimize windshield wiper blades, tires, and composite airframes. It has helped model stents for human hearts. Engineers used it in the latest Gravely brand lawn mower, a streamlined machine with 50 percent fewer parts and less expensive production costs. And students at the Norwegian University of Science and Technology are designing award-winning Formula Student race cars with the software.

Reducing the number of physical trials is a key goal for the software, according to SIMULIA’s Juan Hurtado, who works on nonlinear mechanics functionality in the Abaqus code.

“Physical tests are very expensive,” he says. “If you can minimize testing by doing the design in the computer and simulating the response of these materials to whatever loads, you can use those predictions to optimize your design.”

Abstract
Lockheed Martin developed the Structural Analysis of General Shells (STAGS) code under contract to Langley Research Center in the 1980s. It was a finite element analysis (FEA) program, meaning it broke down models of structures into tiny elements to model a structure’s behavior as a whole. In 2005, French company Dassault Systèmes acquired Abaqus Inc. of Johnston, Rhode Island, which had developed the Abaqus FEA program. The company regularly consulted with users, including Langley’s STAGS developers, and many of STAGS’ capabilities were added to the program. 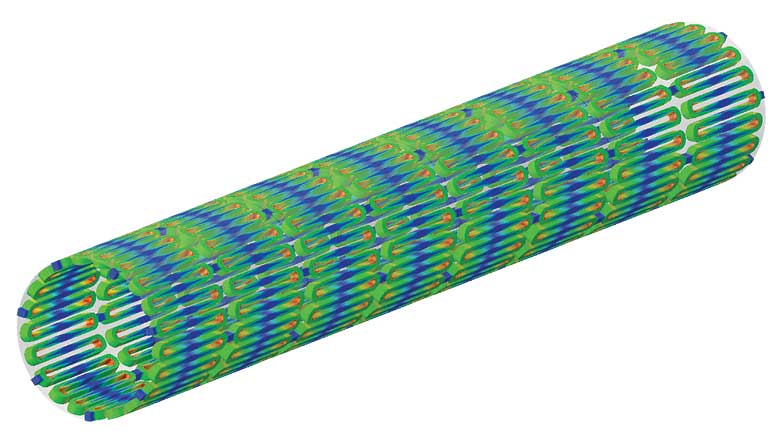 An example of the results of finite element analysis simulation using Abaqus software is this model of a superelastic nitinol stent.Image courtesy of Craig Bonsignore, CC BY 2.0

Abaqus finite element analysis software is used not only for aeronautics but also in a wide range of industries, including by manufacturers of medical devices, windshield wiper blades, credit cards, and automobile tires. Engineers used the tool to help design the latest Gravely brand lawn mower. Image courtesy of Ariens Company

A photograph taken of Aloha Airlines Flight 243 in April 1983 after it made an emergency landing. Unexpected fatigue cracking led to the structural failure of the top half of the fuselage, exposing crew and passengers to the elements. NASA aeronautics engineers used cutting-edge software known as Structural Analysis of General Shells to help determine the cause of the incident.