A new approach to characterizing high-speed turbulence in wind and fluid flows is on track to become the standard for wind tunnel measurements—and is finally catching on in the aircraft-design industry and even among yacht builders.

Devices for measuring fluid speed are known as anemometers. NASA uses anemometers to characterize the behavior of unseen structures of airflowing around models of aircraft in wind tunnels or actual aircraft in flight. In wind tunnels, these flow fields, shock waves, and boundaries between relatively slow- and fast-moving air and any turbulence among them predict flight performance. Characterizing airflow behavior has also helped NASA learn about hypersonic flight.

All this testing also provides data for the creation and validation of aerodynamic modeling and simulation software known as computational fluid dynamics, which the Agency and industry use to evaluate aircraft designs well before wind tunnel testing. And anemometers are used to evaluate wind tunnels and establish baseline flow behavior before testing.

Tao Systems Inc. first pioneered the constant voltage anemometer (CVA) under two Small Business Innovation Research (SBIR) contracts with Langley Research Center in 1992, releasing it as a commercial product not long after. CVAs offer advantages over the long-established technology for monitoring airflows in wind tunnels and other applications, but they have yet to see widespread use.

“It takes a while for people to replace what they know with a new approach that is technically superior but requires retraining,” says Arun Mangalam, president of the Hampton, Virginia-based company. “However, the CVA has been purchased by top researchers worldwide, including NASA.” Indeed, Langley is preparing to pit Tao’s CVA against similar technology in a wind tunnel.

Anemometers use a wide variety of probes. The CVA, as well as constant temperature anemometers (CTA) and constant current anemometers (CCA), usually use probes consisting of a tiny, extremely thin wire held in the wind with an electrical charge that heats it.

The faster air or other fluid passes over the wire, the faster it draws heat from the wire. Because the sensor resistance decreases the colder it gets, the anemometer can derive wind speed from the resistance in the wire.

A traditional CTA adjusts its voltage to hold the wire at a constant temperature. From the change in voltage, flow velocity is derived. A CVA, in contrast, holds input voltage constant, deriving flow velocity from output voltage.

NASA saw the CVA that Tao Systems proposed in the early 1990s especially as an advantage for testing in high-speed wind tunnels. This is because it’s capable of taking readings at extremely high frequencies—up to 1 million per second. That high bandwidth is important when the airflow the sensor is attempting to characterize is passing at several times the speed of sound. The requirement for the rate of measurement is related to the size of aerodynamic structures in the flow and the speed of the flow, with the measurement of small structures at high speed requiring extremely high frequencies.

The CVA system can take such high-frequency readings because it naturally regains equilibrium more quickly than related systems. When voltage is held constant, an increase in resistance resulting from a rise in temperature naturally causes a decrease in current, which brings the temperature back down, Mangalam explains, noting that related systems don’t have the same stabilizing feedback loop.

With funding from the early Langley contracts, Tao Systems built prototypes, including software to run them, and tested and proved these advantages. Over the years, further SBIR work with Armstrong Flight Research Center and Johnson Space Center used the CVAs for in-flight measurement of turbulence and shockwaves and to monitor heat flux associated with shockwaves.

In addition to measuring flow velocity, the probes can also detect temperature fluctuations. They become sensitive to temperature variations at very low voltage levels too weak to heat the sensor. To detect wind velocity, the wire has to be heated.

Much of the company’s work with NASA had the ultimate goal of a closed-loop flight control system that would use data from sensors on an aircraft in flight to allow it to automatically respond to flows and turbulence around it (Spinoff 2010), a project that is still in progress. Constant voltage anemometry is critical to this work.

Some of the NASA projects used hot-film sensors, rather than hot-wire sensors. These operate on the same principle but characterize surface friction rather than flow velocity because they take measurements right at the surface. Tao Systems offers both hot-film and hot-wire anemometer sensors, as well as entire arrays of surface hot-film sensors, which it calls Senflex. The films don’t have quite the bandwidth the wire sensors do, Mangalam says, but he says he’s working with NASA and the Air Force to mitigate the issue because the films are more robust.

“With this anemometer, I can do things in milliseconds that would take minutes with others,” says Langley research engineer Greg Jones, who is overseeing the CVA testing at Langley’s National Transonic Facility (NTF). He notes that the NTF, one of the most advanced wind tunnels in the world, operates at a high cost. “Using this technology I should save thousands of dollars because I can do everything much quicker.”

Mangalam says this is mainly due to the probes’ ability to rapidly shift back and forth between the low temperature ranges that detect temperature and the higher temperatures that sense velocity. Conventional systems would instead use multiple sensors at different dedicated temperatures and risk burning out if temperatures are changed too rapidly.

Jones says this also applies to ambient temperatures, which can alter a CTA’s sensitivities and burn it up if it isn’t adjusted just right. “With the CVA, you don’t have that problem. It’s got this huge temperature range. I’ll have greater confidence in the results and cleaner, quieter signals.” Again, this is particularly important in the NTF, where temperatures range from -250 to 140 °F.

He also says the company has wrapped software around the device designed to make it intuitive and user-friendly.

While the primary users for the technology have been and will likely continue to be NASA, the military, and aircraft manufacturers, Mangalam says there are other applications. Researchers working on managing heat in fuel cells have purchased it to monitor heat flows. The Air Force uses it not just for aircraft but to characterize flows and turbulence in the stratosphere. Others have used it to measure velocity fluctuations in a helicopter rotor and to measure flows through plane engines.

And the devices work just as well with liquids as with air. “America’s Cup winners have used our technology for assessing turbulence characteristics, such as the extent of laminar flow and turbulent flow on lifting surfaces,” Mangalam says, referring to the international yacht race.

“It’s mostly used in research applications,” he says. “But wherever you need anemometry with high bandwidth and spatial resolution, this is the best there is.”

Abstract
A new approach to characterizing high-speed turbulence in wind and fluid flows is on track to become the new standard for wind tunnel measurements. Devices for measuring fluid speed are known as anemometers, and Hampton, Virginia-based Tao Systems Inc. first pioneered the constant voltage anemometer under two SBIR contracts with Langley Research Center in 1992, releasing it as a commercial product not long after. Today, the device is finally catching on in the aircraft-design industry and even among yacht builders. 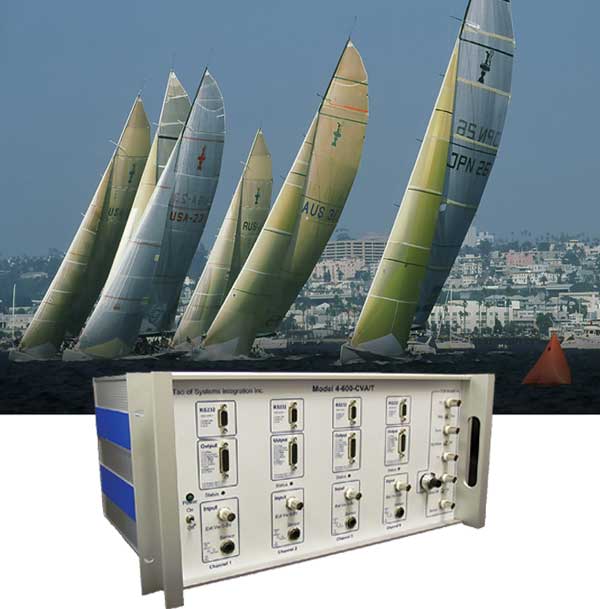 Tao Systems’ CVAs measure liquid velocities just as well as they measure wind speeds, and they’ve been used to design America’s Cup-winning yachts, among other applications. Meanwhile, the company’s latest CVA, the high-bandwidth, multi-channel Model 4-600 (inset) is currently under testing at Langley to compare the CVA with other types of anemometers.Image courtesy of Dale Frost, CC BY 2.0