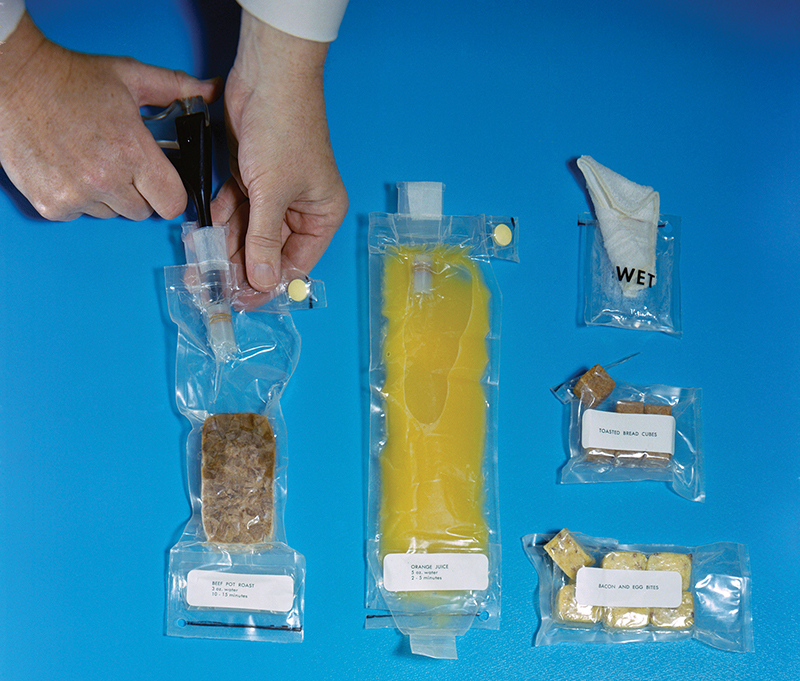 Freeze-dried food, today, is commonplace. It’s in the baby food aisle and next to the dried apricots. Hikers carry it on backwoods treks and doomsday preppers stock it in their basements. But first, astronauts brought it on trips into orbit—and NASA helped create a novelty ice cream treat to connect young museum visitors to the wonder of space exploration.

In the early days of the space program, one of the many problems to solve was feeding the astronauts during their time away from Earth. Food needed to be shelf-stable and long lasting, and it needed to pack small and light and be easy to prepare.

NASA funded research on an array of possible food preservation techniques. “Of these, the most prominent are: dehydration, freeze-drying, intermediate moisture, pasteurization by irradiation, and nitrogen packing. None of these methods of preserving is new, but NASA has contributed to and stimulated advances in this area,” explains a 1971 report prepared for the Agency’s Technology Utilization Office.

In the earliest human missions, the Mercury flights, astronauts ate bite-sized cubes, freeze-dried powders, and semi-liquids squeezed out of aluminum tubes like toothpaste. Not only were the foods unappetizing, but they were hard to rehydrate and prone to sending crumbs floating into the spacecraft’s instruments.

The astronauts complained, and for the Gemini missions, NASA went back to work. Among other requirements, the team was looking for “food that could be reconstituted in cold (approximately 80 °F) water,” according to the 1971 report, in just 10 minutes or less. Previously, reconstituting dried food required boiling (or near-boiling) water, and most foods needed a good 20 minutes to prepare.

NASA funded research at the Army Natick Laboratories, which was able to develop special gravies that, when freeze-dried, could be reconstituted with 80-degree water in just five minutes. The new gravies were encased in a special plastic container that made it easier to mix in the water.

In the decades since, NASA has continued to improve the cuisine it sends for its astronauts—among other advances, astronauts on the International Space Station have access to a refrigerator for fresh fruits, as well as an oven to better heat up their meals—but freeze-drying continues to play a role. Not only does it help preserve nutritional value and extend shelf life, but removing the water also reduces the weight significantly, which is always an important consideration in space travel.

With millions of people around the world riveted to TV footage of astronauts landing on the Moon, interest in the space program grew enormously in the late 1960s and early ’70s. Looking to capture—and expand—that interest, museums developed exhibits on space exploration, and their gift shops offered new ways for visitors to take the experience home. In 1973, the visitor center at Ames Research Center in California had a new idea: what if visitors could taste astronaut food?

Freeze-dried food was key in the astronaut diet at the time but still only just starting to hit the wider market. Ames got in touch with Boulder, Colorado-based American Outdoor Products, one of the few companies making freeze-dried food for the consumer market.

The company was started in 1951 by a Girl Scouts leader interested in lighter foods to take camping. Until then, the best option was heavy canned food. She decided to make dried and dehydrated foods.

When NASA improved methods for freeze-drying food, the dried food industry began adopting it too, says current President Rodney Smith, whose father bought the company with a friend in 1971.

“Freeze-drying offered the opportunity to have longer shelf life, quicker rehydration, and better nutrition than dehydrated food could,” he explains. “So that’s why they started using freeze-dried as much as they could.”

By 1973, when Ames got in touch, American Outdoor Products was becoming a known source for freeze-dried meals like stews and even pasta dishes for serious campers and backpackers. But Ames wanted something different. “They called us, asked us if we did a freeze-dried ice cream,” Smith says. “We said, ‘No, but we can.’”

Of course, it required some additional innovation, even beyond the basic techniques NASA had already improved and popularized. No one had ever made freeze-dried ice cream.

“Freeze-drying is a basic principle, but a difficult process,” explains Smith. “It takes anywhere from 8 to 24 hours. Ice cream takes 24 hours.” The first step is to freeze the food to an extremely low temperature, he says, around 40 degrees below zero. The item is then placed in a vacuum chamber, which lowers the pressure around the food. When heat is added at that low pressure, the water content within the food sublimates, or transforms directly to a gas.

That water vapor is sucked out of the chamber, and the process repeats, Smiths says, anywhere from 20 to 100 times. At the end, more than 99 percent of the water has been removed.

At the beginning, Smith says, the company would freeze-dry gallon buckets of ice cream, and then chip out portions to wrap individually and sell. Later, they found a supplier of sliced Neapolitan ice cream.

Today, they sell ice cream sandwiches, still in the classic Neapolitan flavor combination. In whatever shape, however, Astronaut Ice Cream has proven a big seller: it is now available at more than 1,000 retailers around the world and is the top seller in the Smithsonian Air and Space Museum gift shop, according to Astronaut Foods’ executive sales director, Kelly Cavill.

“Today we’re on third-generation brand loyalty: grandparents buying it for their grandkids,” she says. “It stimulates conversation. Do astronauts really eat this? How do you make it?”

But the company also continues to sell an even wider range of freeze-dried foods through its other divisions to its core market of backpackers and campers, using the techniques popularized and improved by NASA, says Smith. One of their best-selling items? Freeze-dried fettucine Alfredo. “The beauty of a freeze-dried noodle is that it keeps its shape. It doesn’t disintegrate like a standard dehydrated noodle would,” Smith says.

Of course, noodle integrity is only one of the benefits of freeze-drying, Smith emphasizes. Compared to traditional dehydration techniques, which can extract as much as 92 or 96 percent of water content, freeze-drying gets out more than 99 percent of the water, which leaves a lighter product. It’s also, as NASA found for its astronauts, easier to rehydrate.

Just as important is what it leaves behind. “Freeze-drying offers the best shelf life and preserves the most minerals, enzymes, and other nutrients,” Smith says. “All it takes out is just the water.”

Abstract
Freeze-dried food is commonplace today, thanks in part to NASA, which helped innovate many of the modern techniques during early research into food preservation for space exploration. In particular, NASA’s advances made freeze-dried meals easier to rehydrate without boiling water. Capitalizing on the interest in astronauts in the early 1970s, the gift shop at Ames Research Center reached out to Boulder-based American Outdoor Products, already using NASA’s improved techniques for its freeze-dried foods, and asked them to create “astronaut ice cream.” The company now sells it around the world.

Although freeze-dried ice cream sandwiches were not actually part of the astronaut diet, the treats took advantage of advances in freeze-drying techniques NASA pioneered for its missions and were first created at the request of Ames Research Center’s Visitor Center.

Here U.S. astronaut Sunita Williams enjoys a cup of ice cream. Unlike during early missions, the International Space Station is equipped with a freezer, an oven, a microwave, and other tools to store and prepare fresh food.

In the earliest days of human spaceflight, food needed to be compact, have a long shelf-life, and able to be reconstituted with relatively cold water. It also had to be packaged so crumbs would not fly loose. This photo shows water being injected into a packet of dehydrated roast beef, alongside sides, prepared for the Gemini III flight.