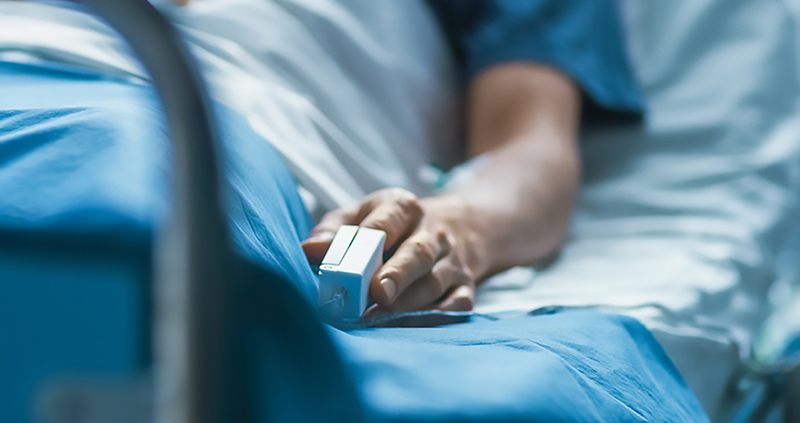 Hospital rooms are full of sensors, screens, and beeps. Those sensors send signals not just to screens in that room but down the hall to the nurse’s station and sometimes even across the hospital or beyond, which means when an alarm goes off, the right people come running to help.

It’s technology that helps save lives daily. But before it reached the ICU, the technology was invented for something even more extraordinary: sending health data from space down to the ground.

These days astronauts are continuously monitored while in space: heart rate, body temperature, sleep cycles, even the composition of the air they exhale is measured to better understand how human bodies react to being in space. All that information streams down to the ground, where it is logged and analyzed in the moment and over time.

But it didn’t start out that way. Like much of what was needed to get humans safely into space, the technology to remotely monitor vital signs didn’t exist until NASA came along. While physiological measurements of the Mercury astronauts were taken during flight, little was known about what was happening in their bodies in real time during orbit.

The Gemini Program aimed to develop techniques for longer-duration space travel—and that included ensuring astronauts were safe and well along the journey. It was the first time Americans would spend days in space instead of just hours. In 1958, two engineers,James Reeves (then in the Navy) and Ben Ettelson, approached NASA with a plan for what is now called telemetric health monitoring. “They said, we can do this. We can bring it down so you can monitor the health during these missions,” recounts Jim Green, now president of Spacelabs Healthcare Inc., the company Ettelson and Reeves founded.

The challenge was formidable. Among other difficulties, according to an article published in the journal Electronics in 1965, “equipment must be extremely small, lightweight, and highly reliable in the face of severe environmental loads and variations. Good contact with the astronaut must be made and maintained far longer than in normal practice despite the restrictions imposed by his spacesuit.”

In the end, the astronauts wore a belt carrying four different signal conditioners that each captured data from sensors and electrodes attached across the body: an oral probe for temperature, electrodes for ECG (electrocardiogram) heart data and breath cycles, and an inflatable cuff with a sound transducer over an artery for blood pressure.

Then the data was fed directly into the onboard telemetry system, explains the article. For the first time ever, “ground monitoring stations receive the telemetered signals during flight. These signals are used to assess the physiological condition of the astronaut.”

According to authors Herbert Seal, then-chief project engineer at Spacelabs, and then-researcher Gershon Weltman, the goal was to monitor the wellbeing of the astronaut during the flight as well as to gather data for the planning of subsequent missions.

Spacelabs designed and built three of the four signal conditioners (all except the one for blood pressure) as well as the onboard telemetry system that sent the data back to the ground via radio frequencies. The system was first worn by astronauts James McDivitt and Ed White during the historic 1965 Gemini IV mission—when White completed the first-ever spacewalk by a U.S. astronaut. It later flew with astronauts on additional Gemini missions, and an expanded system flew during Apollo flights.

Recognizing the huge impact Spacelab’s technology had in successfully and safely landing astronauts on the Moon and bringing them home, in July 1969—just days after Neil Armstrong’s first steps on the Moon—NASA’s Manned Spacecraft Center (now Johnson Space Center) honored the company with a certificate of appreciation for its “outstanding” contributions to the Apollo Program.

For the new company, it was a foundational success. “The NASA contract was a fundamental enabler of this technology. It allowed people to think about how to invent this and make it happen,” says Green. Once the technology existed, the company moved to transition it for the broader potential market here on the ground.

That required some additional product development, including adapting the radio signal to work with shorter frequencies than the long-range ones used to send signals from space. And the company has continued to advance and improve the technology in the decades since. However, says Green, “the fundamentals haven’t changed much at all. Being able to monitor someone far away, without having them hardwired up all the time—that fundamental innovation is what this is all about.”

Soon after the first flights during the Gemini project, the Snoqualmie, Washington-based company began working with hospitals in the Los Angeles area, starting with intensive and critical care monitoring. The goal was “to bring in this concept of monitoring and telemetering that information—so you could watch them not just in the room, but from room to room and down the hall.”

Green explains that one of the important new features the Spacelabs system offered was its portability, thanks to the miniaturization developed to fit into spacesuits and the fact that the signals could be sent to stationary monitors elsewhere via radio frequency. Now, instead of unhooking patients to move them “blind” from one room to the next, say from the emergency room to radiology, you could still keep track of the patient while they were moving around.

As the technology advanced, Green says, the resolution increased, enabling more and better data to be collected. Then the company moved a step further, to make the technology “smarter” by incorporating algorithms that interpret the health data and suggest a diagnosis. “The algorithms are used to determine if something is alarming,” Green explains. In other words, “is this something that somebody needs to do something about?”

In the decades since, the company’s business has expanded exponentially around the world. “It’s a pretty good chance, if you walk into any hospital, somewhere along your stay, you’ll run into Spacelabs Healthcare technology,” Green says.

But the company is looking to expand its reach even further, so at-risk patients and their doctors can keep track of their health even outside the hospital. Eventually, Green says, “we expect that home-based monitoring will start to be bigger than hospital-based—the market is pushing that way.”

This can already be seen in the explosive growth in fitness trackers and smart watches over the past few years, but Spacelabs offers diagnostic-level monitoring with fidelity and resolution beyond the current reach of consumer wearable technology.

Starting with cardiology, they have developed a line of at-home ECG and blood pressure machines. The devices are easy to use and non-invasive, and they send alerts to the medical provider if a problem develops.

“When a patient leaves the hospital, it’s very costly if they have to be readmitted,” Green explains. But not all post-hospitalization complications are the same. Through remote monitoring, health providers “might see that you are not taking your meds properly. Maybe you don’t need to come back. Or maybe you do need to come back, and this device will alert you and your doctor before things get worse.”

And while most of the devices today are prescribed for specific at-risk patients, as the cost of the high-fidelity sensors goes down, Green expects usage to expand.

“What we’re working on is how to really provide a full continuum of care,” Green adds. “This kind of monitoring can really help healthcare providers keep eyes on their entire population’s health.”

Today Spacelabs Healthcare is moving to a new frontier—home-based health monitoring. This device can send blood pressure reports from home to the medical provider. 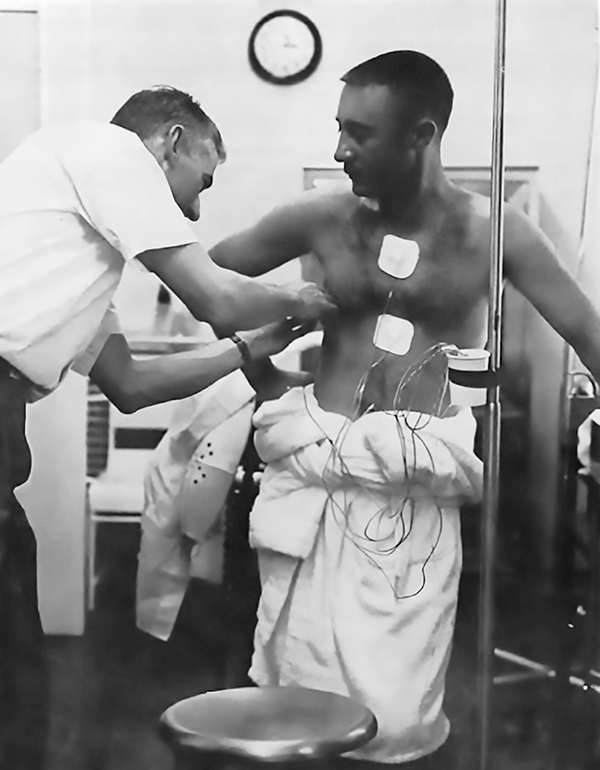 The first telemetric health monitoring—in which biometric data was captured and sent to the ground for real-time monitoring—was built for the Gemini Program. Here, astronaut Virgil “Gus” Grissom is fitted with electrodes that would gather data on heart rate, breath cycles, and more during his spaceflight.

Spacelabs Healthcare Inc. got the contract to design the telemetric health monitoring system for the Gemini Program and improved it further for the Apollo Program. But they also soon adapted it for hospitals on the ground, enabling doctors and nurses to use small sensors and monitor patients from anywhere in the hospital. 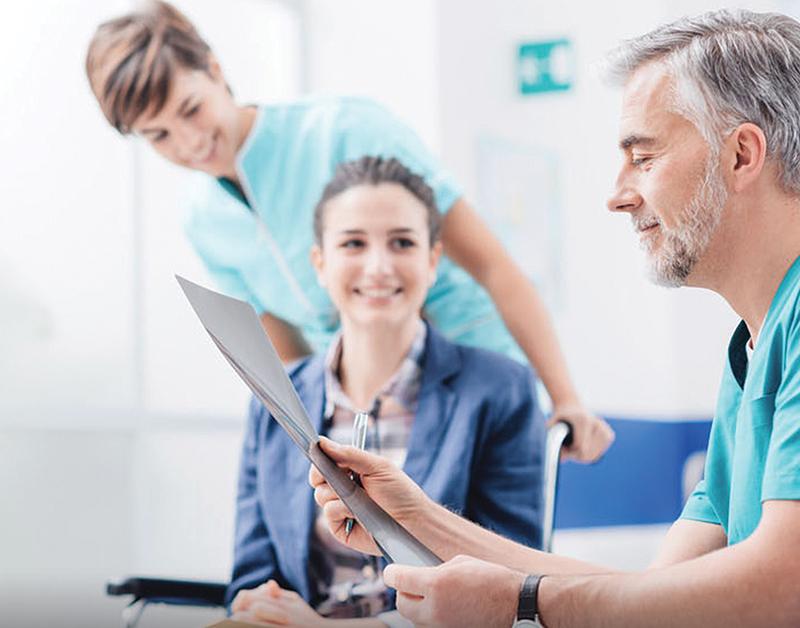