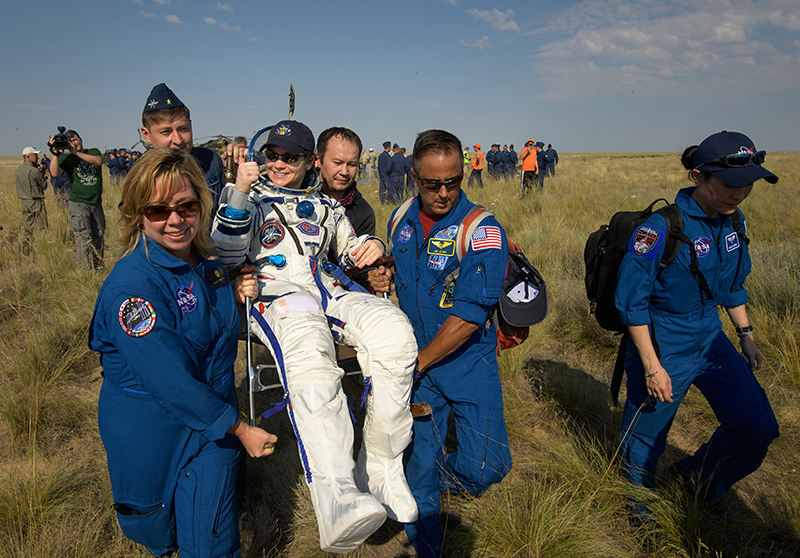 The inside of the International Space Station is designed to give astronauts the illusion of verticality in the weightlessness of orbit. The “floors” are relatively uncluttered, and lighting runs along the opposite “ceilings,” with most of the monitors, cables, and frequently used equipment packed onto the “walls.” Signage and labeling provide further visual cues. It’s said that astronauts learn to use their eyes rather than their inner ears to establish their orientation. It’s an illusion that’s easily broken, often resulting in confusion, nausea, and vertigo, but this happens less with time.

The return to Earth results in a similar adjustment period. Bill Paloski, who studied balance issues as a senior scientist in Johnson Space Center’s Neurosciences Laboratory, recalls an astronaut who seemed to have regained his land legs a couple of days after returning from a space shuttle mission. Nonetheless, Paloski advised him to avoid sports and other activities that would test his balance, counsel that the crewmember disregarded in favor of playing basketball with his son. “He said, ‘You were right. I went for a jump shot and didn’t know how I was going to get back down, and I ended up in a pile on the driveway,’” Paloski recalls, noting that the astronaut became disoriented as soon as he lacked information from the bottom of his feet.

Shuttle crewmembers typically made a full recovery in anywhere between 12 hours and two or three days, but it’s not unusual for astronauts who spend months on the space station to take more than a week to fully readjust to gravity.

To observe space-induced balance disorders, NASA uses a technique called computerized dynamic posturography (CDP). Prototyped in the 1970s by a Massachusetts Institute of Technology (MIT) graduate student, based on earlier NASA-funded MIT studies, CDP tests a subject’s balance in a controlled environment, moving a platform and visual cues to challenge the subject’s equilibrium. It’s a standard diagnostic technique today, and flight doctors at Johnson still use it to determine when returned astronauts are ready to go back to their normal duties.

About the size of a phone booth, the system would not be practical for a lunar or Martian surface mission, though, so in the mid-2000s, Paloski and colleagues started looking for other methods. Another MIT graduate student, Erez Lieberman Aiden, happened to be an intern at the Neurosciences Laboratory at the time, as was Katey Forth, then a post-doctoral researcher.

As the team worked to gain a better understanding of how the brain controls balance, Paloski says, “we discovered a lot of patterns of the brain searching for information from the bottom of the feet.” They thought they might use that same information to measure balance. Using multiple pressure sensors under a subject’s feet to passively monitor pressure distribution was simple enough. Then Lieberman Aiden, whose expertise was in mathematics, figured out how to apply known algorithms to those pressure distributions over time to quantify postural stability, with no need to challenge the vestibular system, Paloski says.

It was an entirely new technique, based on a new model of postural control. In 2008, the three filed for a patent, which was granted in 2011. By the time the patent was filed, Forth and Lieberman Aiden had founded a company and were working to turn the technique into a commercial product.

Forth recalls talking with Lieberman Aiden over lunch at Johnson and realizing that the ability to detect patterns of balance instability could have wide applications. Both of them had grandmothers whose health and quality of life had permanently declined after a serious fall. “We knew first-hand that if we could prevent falls, we could really impact people’s lives,” she says. “That was the beginning.”

At first, they worked to develop shoe insoles. Formed at the start of the global recession, though, the company foundered. It resurrected in 2015 under the name Zibrio Inc. “By 2015, Fitbit had turned up,” Forth says. “People were more receptive to the idea of gathering data about themselves.” And with older baby boomers about to turn 70, she adds, the timing couldn’t have been better.

While NASA and MIT have a joint invention agreement around the technology, MIT manages the patent, which Zibrio, based in Houston, has licensed exclusively.

Instead of insoles, the company designed a product that looks like a bathroom scale. “A scale was a much more familiar form factor, and we didn’t think 70- or 80-year-olds were ready to plug in their shoes,” Forth says. There would be aversion and a clinical version for medical facilities, and the devices would assign users a fall-risk score between 1 and 10, with 7 and up indicating low risk and 1 to 3 meaning high risk.

In 2018, the company took its technology on the road, testing more than 500 seniors at home, in senior living facilities, and in hospitals, a representative cross section of the older population, Forth says. The company found that its algorithms could actually predict the likelihood of a fall.

Zibrio released its version at the National Senior Games in June of 2019, with the clinical version due for release around six months later.

A person’s balance is by no means fixed and can be influenced by anything from balance exercises to changes in medication, sleep, diet, mood, and activity level, Forth says. An app for the consumer version of the balance scale lets users explore possible causes and solutions for balance issues. “The SmartScale gives you a score and then, through the Zibrio app or with a physician, you can deep-dive into what’s helping and hurting your balance.” The app generates a personalized plan for improvement.

Just knowing one’s risk level can be a major advantage. As the company was conducting tests, Forth says, a balance scale got left at a senior living facility, and falls there subsequently dropped by 50 percent. Without a control group, she notes, it’s hard to make strong claims based on the experience, but it seems clear that residents were taking action based on their scores, whether that meant taking the balance class that was available at the facility or making other changes.

Meanwhile, in the more rigorous studies, users who weren’t told their score were found to experience falls at the expected rate, given their scores. That predictive power is unprecedented, Forth says. “Currently, the best indicator of whether you’ll experience a fall is whether you’ve already fallen. I think we can do better in this day and age.”

The balance scale isn’t just for the elderly, either. It could be useful to anyone trying to improve their physical performance, Forth says, noting that balance indicates the functioning of not just the vestibular system but also the overall nervous and musculoskeletal systems. “Your balance doesn’t just go when you’re 80, and we can detect changes in 20-year-olds and 30-year-olds,” she says. “With our technology, we’re really trying to empower people with insights far beyond what they know about themselves and what others know about them.”

The clinical version provides an even larger package of information to guide physicians’ recommendations.

“We want to be the gold standard of balance measurement,” Forth says, noting that no widely preferred method has even existed. “We want to be in every doctor’s office.”

The simplicity that lets it test balance without provoking a fall has also helped make it affordable, with the consumer version running $249 and the clinical scale priced at $499. NASA’s CDP booth, meanwhile, runs about $70,000.

Forth credits NASA with creating the opportunity to take a new approach to an old problem. “The Johnson Space Center work is the core of everything we’re doing. Now we’re bridging the gap between the science and how to help people.”

Based on a new technique pioneered in Johnson Space Center’s Neurosciences Laboratory, the Zibrio balance scale assesses balance by applying algorithms to changes in pressure distribution over the course of a minute. The company found it could even predict a subject’s likelihood of experiencing a fall. 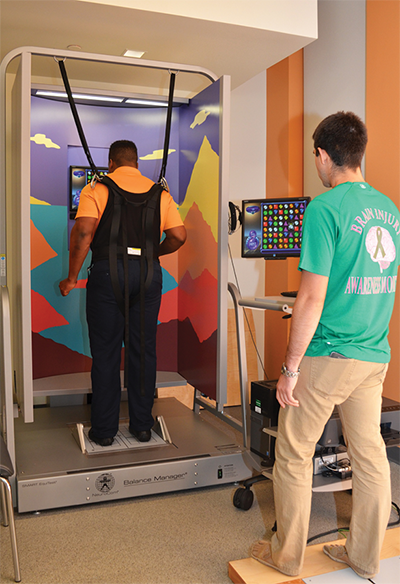 For decades, NASA flight doctors have used a technique called computerized dynamic posturography to assess astronauts’ balance after stays in space. Moving visual cues and a shifting platform challenge the subject’s equilibrium. But a system of this size wouldn’t be practical for a mission to the Moon or Mars. Image courtesy of the U.S. Army

NASA astronaut Anne McClain is carried from the landing site after returning from more than 200 days on the space station in2019. It can take astronauts more than a week to fully regain their balance after extended stays in space.