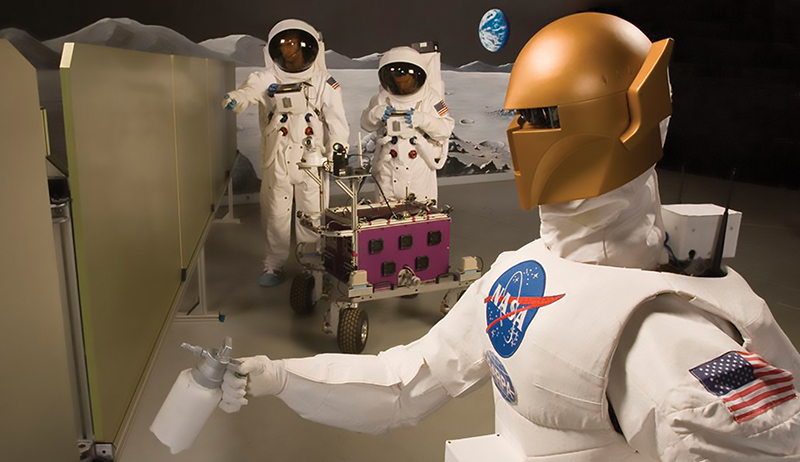 Can you make a robot feel? That was the question posed to Johnson Space Center engineer Toby Martin.

It wasn’t a heart that NASA wanted to give its Robonaut, though—it was tactile sensing for the robot’s hands.

“It didn’t have an autonomous grasping capability,” Martin says of the first version of NASA’s robot astronaut. A control systems specialist, he was tasked in 2004 with looking for a way to give it that ability. “First we had to figure out how to sense when it’s grasping something,” he says. “We wanted the hand to be able to grab an object and adjust finger forces and positions and tensions to pick up irregular objects.”

At least one company that responded to Martin’s request for proposals, Intelligent Fiber Optic Systems (IFOS) Corporation, was no stranger to NASA. Much of the Silicon Valley, California-based company’s funding to develop its initial technology had come from two Small Business Innovation Research (SBIR) contracts with Langley Research Center a decade earlier.

For the Langley project, the company had proposed developing “smart surfaces” for aerospace materials and other applications by creating what IFOS calls “optical nerves.” These are optical fibers with reflective micro-structures called fiber Bragg gratings imprinted within their cores at intervals. A device known as an optical interrogator sends light along the fiber, and each grating reflects back a particular wavelength signature, which changes slightly if there are changes to strain or temperature.

“If you stretch a grating, the wavelength that comes back becomes longer, proportional to the strain,” a phenomenon known as red shift, explains Richard Black, chief scientist at IFOS. “If the grating is compressed, there’s a proportional blue shift.” Similarly, a rise in temperature causes red shift, while a drop leads to blue shift. The IFOS interrogator can detect changes in wavelength on the order of picometers to femtometers, the infinitesimal unit used to measure atoms, which it uses to determine strain or temperature change.

With a series of fibers attached to or embedded in a surface, each with several fiber Bragg grating sensors along its length, the interrogator can monitor strain and temperature across the entire surface, a capability that has a multitude of possible applications across many fields (Spinoff 2002).

For Robonaut’s hand, the company proposed that its technology could determine the position of each finger in real time by measuring the strain that comes with bending, and if it took readings fast enough, it could even detect vibrations and textures.

“I was kind of dubious that it would work for our application, but I was intrigued,” says Martin. “It provided many of the benefits of strain gauges without some of the negatives, like external electrical noise and interference. With several gratings per fiber, the density of sensors that could fit into a small space was also a plus.” Johnson granted the company an SBIR contract to explore the concept’s feasibility. To avoid rebuilding the hands, NASA asked for a glove that fit over the existing hands.

At the time, IFOS was still using much the same interrogator it had developed for Langley, supporting no more than 10 sensors. To outfit an entire hand requiring many more sensors, though, the company made a fundamental change by developing a scalable architecture that produced an enduring improvement in its sensing capabilities, says Black.

With Johnson funding, the company took an optical chip concept made for telecommunications applications, modified it for its massively parallel sensing architecture, and worked with a foundry to customize a photonic spectral processor—a single chip with many waveguides stamped into it. The processor acts like a prism, sending different parts of the spectrum to different photodetectors in an array. The interrogator monitors changes in the ratios of various spectral components simultaneously to allow precise determination of the sensor wavelengths.

The ability to monitor multiple sensors simultaneously allows for much faster readings, which is important for detecting, for example, the tiny, rapid vibrations caused by friction with a textured surface.

The glove didn’t work well due to misfires caused by wrinkles and other issues, says Martin. Under a Phase II SBIR contract, however, IFOS and the Mechanical Engineering Department at Stanford University developed their own finger prototype. “We tested it and verified the experiments the company had run showing it worked,” Martin says. At the time, both the finger prototype and the interrogator were too large to incorporate into a human-sized hand.

That was as far as the project went, but someone from the Johnson team pushed Behzad Moslehi, the company’s chief executive and chief technology officer, to pursue funding for possible medical applications through the National Institutes of Health (NIH), he says. “I looked into it, and I found it was the right home.”

IFOS has since found a multitude of possible medical applications for its fiber-sensing technology.

Shortly after the Robonaut project, as the company was exploring medical applications, Intuitive Surgical Inc. acquired one of IFOS’ fiber-optic sensor systems to investigate its use on dexterous surgical robots. A few years later, IFOS produced several instrumented grasper assemblies with haptic sensing for a medical application Samsung was evaluating. Moslehi says he sees the medical robot market as an opportunity for the company’s future, through strategic partnerships with other companies.

Closer to commercialization are instrumented biopsy needles that surgeons can use in conjunction with both MRI and ultrasound machines. Stanford has been collaborating with IFOS through its engineering and medical schools to evaluate and test the technology on animals in the MRI environment.

Tools used in real-time MRI-guided surgery—where the surgeon is either reaching into the MRI machine or working remotely from a control room—must not react to magnets or use electricity, Black says. “Optical-fiber sensors are ideal for the sort of sensing we’re doing.” But such a needle is almost invisible in the MRI image.

“We came up with a way to measure the shape of a biopsy needle in real time, down to the tip of the needle, and superimpose the precise shape over the blurry artifacts from an MRI,” he says. This lets surgeons see what they’re doing.

The tool can also measure forces on the tip, which relate to tissue hardness. This provides another clue for surgeons, as tumors are typically harder than the surrounding tissue. The team is working on providing haptic feedback, such as a joystick for remote surgery that vibrates according to strain on the needle.

A catheter for sucking up fluids during surgery would work much the same way.

The company has successfully tested the technology on pigs but has yet to go through clinical trials and FDA approval, so the operating room is still a ways off. IFOS is also working with Civco Medical Solutions to develop needles with optical fiber sensing.

Meanwhile, at the University of Calgary, another team is working on a similar device for MRI-guided neurosurgery, known as NeuroArm. IFOS sold the team an interrogator and outfitted a pair of surgical forceps with its fiber-optic sensors.

Sleep centers at Stanford and at the University of California, Los Angeles, are collaborating with IFOS on a device to monitor sleep apnea with a real-time pressure profile of the airway, and the company has a proposal pending with NIH for similar technology to monitor male incontinence.

In all these applications, fiber-optic sensing allows for a thinner probe or surgical tool and uniquely high-resolution, multi-dimensional mapping.

In another project, the company is building on its robotic-hand experience to work with the NIH and George Mason University to develop a robotic prosthetic hand that combines IFOS’ fiber-optic sensors with ultrasonic imaging technology that senses the activation of finger-specific muscles in the forearm. This lets the user control the fingers with high precision.

More-recent NASA work will also likely lead to commercial applications in medicine and beyond. Under recent Small Business Technology Transfer (STTR) funding from Goddard Space Flight Center and Johnson, IFOS and Stanford are collaboratively developing specialized photonic integrated circuits (PICs), in this case for a “lab-on-a-chip” device to monitor concentrations of biochemicals such as protein and creatinine in animals and humans, including astronauts. The technology is similar to electronic integrated circuits, with a light source and various optical tools densely interconnected within a chip smaller than a fingernail.

“It’s like a miniaturized, specialized photonic computing device or signal processor,” says Moslehi. “And it works at the speed of light.”

IFOS is already working with several PIC foundries to fabricate the optical chips, which could find a multitude of uses.

Black notes that, while the interrogator used in the Robonaut work was desktop-sized, the one now being used for surgical devices is half the size of a shoebox. The company is working to reduce that to the size of a smartphone.

In the early days, says William Price, IFOS’ strategic programs manager, “the cost to build a high-performance interrogator was a significant limiting factor, but IFOS is continually working to reduce costs.” IFOS recently completed beta testing and will soon launch a family of interrogators priced under $10,000, a fraction of the price of its first interrogators, he says, noting that he expects these new products to open up new applications for fiber-optic sensing beyond the medical industries. They will complement IFOS’ other high-performance interrogators for acoustic and vibration measurements.

Moslehi says NASA in particular, as well as other Federal agencies, has been instrumental in providing the funding needed to develop the company’s technology innovations into products since the beginning. “Certainly, in the early days when IFOS was still run out of a garage in Silicon Valley, NASA funding was what helped us take off and develop this technology,” he says.

Many of the projects since then, intended for use in spaceflight, rocket testing, atmospheric reentry, and other extreme environments, have kept that technology robust, reliable, and cutting-edge.

Abstract
Intelligent Fiber Optic Systems (IFOS) Corporation’s first funding came from NASA SBIR contracts to develop optical fibers with strain and temperature sensors etched at intervals into their cores, a technology with many possible applications. SBIR funding from Johnson Space Center let the Santa Clara, California-based company adapt the technology to enable tactile sensing in a robot’s fingers. IFOS has used that capability to create sensitive surgical tools, which it has sold to university research labs and is putting into clinical testing.

IFOS and researchers at a handful of universities are working to apply the company’s technology to medical devices, including tools for robotic surgery. 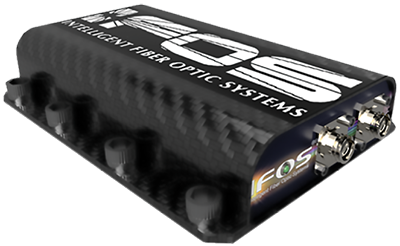 IFOS uses optical interrogators such as this to extract information about pressure and temperature from light reflected from sensors along an optical fiber. 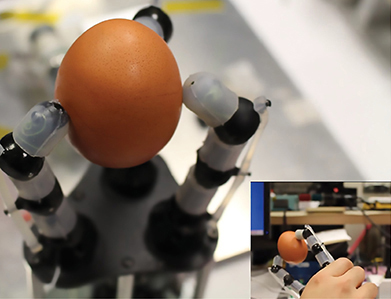 This prototype hand IFOS developed for Johnson can sense when it’s grasping something and adjust finger pressures and position to grasp irregular objects. 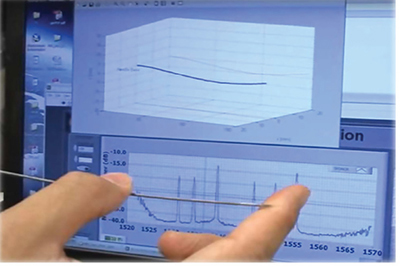 This surgical needle prototype IFOS made can sense its position along its length and also detect changes in hardness. A surgeon working on a patient in an MRI machine, for example, can hardly see the needle in the MRI image. IFOS’ technology can superimpose an image of the needle in the body.

Under contract to Johnson Space Center, Intelligent Fiber Optic Systems (IFOS) developed a system that aimed to give tactile sensing to the hands of NASA’s first Robonaut robot. The work improved the capabilities of the optical interrogator that’s at the heart of most of the company’s systems and improved technology that IFOS has since used to let surgical equipment sense pressure and extrapolate its position in space.