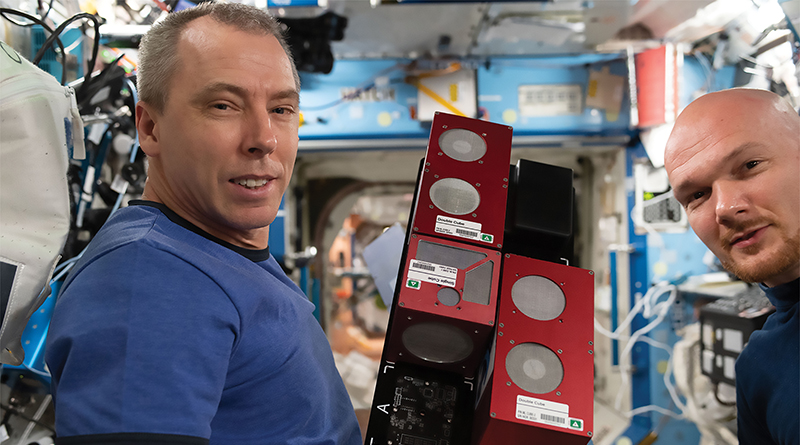 Much of the research NASA does on the International Space Station is designed to better understand how to work and live in zero gravity to help plan for longer crewed missions deeper into our solar system. But the space station also offers a platform for research with a very different goal: learning how to take advantage of a zero-gravity environment to benefit people on the ground.

It’s the latter concept that motivates a small start-up called Space Tango, and the company is well on its path, already selling lab space in orbit and making plans for an orbiting factory.

The company’s TangoLabs are located in the U.S.-operated National Laboratory on the space station, explains Mike Read, who manages NASA’s Commercial Space Utilization program for the space station from Johnson Space Center. “They have developed a plug-and-play modular system for doing research on the station,” he says. The units are self-contained but connect to power and data networks on the space station through the EXPRESS racks (which stands for Expedite the Processing of Experiments to Space Station) in which they are installed.

They’re hardly the only player selling lab space on the space station (see, for example, Spinoff 2012, as well as page 36 of this book). NASA is actively supporting and partnering with such companies to expand commercial access to and interest in microgravity. In fact, in 2010 Congress mandated that half of the National Laboratory’s resources be made available to entities outside NASA, including commercial, academic, and governmental organizations.

Read says NASA stands to benefit in the long term from all this commercial activity. “NASA is always going to need to do research and technology development in microgravity. We won’t send a crew to deep space without them having been in space. We won’t fly environmental control systems without testing in microgravity. Not going to happen,” he emphasizes. “Having said that, if there are no other users of microgravity, of the next platform, then we are left holding the bag to pay all of the cost. And that’s not tenable.”

Space Tango was founded in Lexington, Kentucky, by then-graduate student Twyman Clements in 2014, in partnership with then-Kentucky Science and Technology Corporation chief executive Kris Kimel. The company sent its first TangoLab to the space station just two years later, and by 2017, had a second one installed as well.

In 2017, the company also signed a Space Act Agreement with NASA to work with safety and engineering groups at Johnson to vet their designs and improve safety, particularly in regard to electrical systems. The space station is “very sensitive with electronics, in how you draw power but also how much electromagnetic interference you radiate,” Clements explains. He says the company’s designers worked closely with NASA engineers and planners to better learn how to work within safe parameters. “We couldn’t be here without some of those people’s patience and help.”

Read notes that Space Tango is already one of the more commercially diverse companies in the National Laboratory. Where many of the other lab platforms are contracting mainly with NASA and government agencies, he says, “Space Tango is actively doing business development, and they are bringing in people who maybe haven’t done spaceflight before. It’s pretty unique and pretty fun to watch them evolve and grow.”

Space Tango launches CubeLabs, which hold experiments and slot into the suitcase-sized TangoLabs on station. The company designed the CubeLabs as an open source platform so any researcher could develop an experiment using their platform, but Clements says most customers have preferred to work with Space Tango to do the required engineering and scalable design.

Since the experiments must be essentially autonomous once in orbit—an astronaut transfers the CubeLab from the launch vehicle to the TangoLab, but after that, any monitoring is done through the internet connection from the ground—everything must be carefully planned in advance. For example, Clements says, some biological experiments need power to move fluids and condition growth media. “Typically we build everything in-house. We write the code, machine the parts, design the circuit boards. Everything.”

As of mid-2019, the company had launched over 100 experiments for clients from all kinds of backgrounds, Clements says. “Everything from high schools to nonprofits to research groups to Fortune 500 companies.”

Among the more notable names on the Space Tango client list is Budweiser—yes, the beer company. “It’s marketing, but it’s also science,” Clements says. The company launched a research project to look at how microgravity affects the growth of barley, one of the core ingredients of beer, all in the service of eventually becoming the first beer in space.

Other customers have done research into materials manufacturing, biomedical devices, flow chemistry, and more. But research isn’t Space Tango’s big-picture goal, Clements says—manufacturing is. “What we’re trying to do is create use cases for scalable manufacturing,” where the microgravity environment adds value.

For example, one customer, Lambda Vision, is building retinal implants. Fabricating the implants requires very even, very thin layers, or the patient getting the implant won’t be able to see clearly. However, the layers take time to bond, and on Earth, Clements explains, gravity creates a settling effect that makes the coating uneven. So even though launching to orbit adds significant cost, the benefits of microgravity for manufacturing small but very high-value items like these could outweigh that.

“The goal for the TangoLab contract is to test out the new automated process we helped them develop. And then later they might use the process to produce the implants on a commercial scale,” he explains.

For that, they might use a new system Space Tango has in the works. The company is building an orbiting platform called ST-42, which would be independent of the space station and allow for larger-scale manufacturing.

To keep costs down, it wouldn’t stay in orbit. Instead, it’s a capsule that would “go up, run its operations and return,” Clements says. With the expansion of the commercial launch industry and reusable rockets, the cost of getting to space is going down. The company is planning the first launch in the mid-2020s, and says the financial forecasts they have done look good.

“Space is really a means to an end,” emphasizes Clements. “And so we use space to create these things—retinal implants, fiber-optic cables—for the benefit of Earth.”

Abstract
The space station offers a unique platform for learning how to take advantage of zero gravity to benefit people on the ground. That’s what motivates Lexington, Kentucky-based Space Tango, which sells lab space in orbit. In addition to being hosted on the space station (which supplies power and a data connection), the company designed its modular TangoLabs with help from safety and engineering groups at Johnson Space Center. Today, the company has launched over 100 experiments for clients ranging from researchers to Fortune 500 companies.

Space Tango’s Gentry Barnet (back) and Paul Kuehl (front) prepare a CubeLab to host a tissue chip investigation that launched in 2019. The company has delivered more than 100 experiments to the space station for clients ranging from high schools to nonprofits to research groups to Fortune 500 companies. Image courtesy of Slicked Media for Space Tango